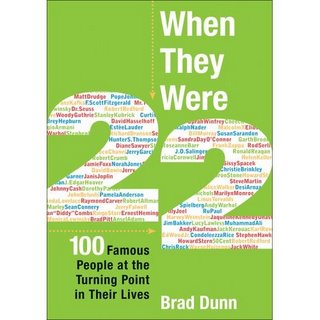 To start today’s blog I thought I’d show you something I came across today (see left). This took me back and made me think about ‘turning points’ and if I’ve had mine yet. I think I’m actually in the middle of that turning point right now. Maybe that book has it right. My 21st year was great and fun…but not all that significant in terms of what will effect the rest of my life. This year, however, I feel myself getting closer to a ‘grown up’ job. I will gradute before I turn 23 and I can scratch another thing off my “things to do before I die list.”

I’m not scared of graduating anymore. For a few months awhile back I couldn’t sleep at night because I was scared I’d be working at Dion’s for the rest of my life. Now, I know that even if I don’t end up at a magazine right after college it’s not completely out of the picture. Recently I’ve also been thinking about the possibility of going back to school to get my masters in more of the design aspect of journalism – just a tiny thought.

Whew. Anyway…today was fun. I went to this thing called something like “Johnson Highland’s Summerfest.” This mile-long fest was an arts and crafts festival meets young adults looking to have a good time. The arts and crafts weren’t things your grandma would want (well…most grandma’s at least. For example, I got my mom a hummingbird feeder made out of a beer bottle. There were beer, margarita, daquari stands ever so often complete with sampling of Mike-Hard-Lemonade! There was also a big stage set up in a park right next to the street; I stayed to hear two acts – both good…but never caught either name. One of the coolest things about this was that it was all held on a residental street. I’m not sure how they got ALL the home-owners to agree to it, but it I was impressed.

The ONLY downfall was the humidity. In fact – that’s the only downfall I see to this city. I don’t know if I would adapt to it either. GRR. Weather makes me angry. But on the plus side – This Book ranked Atlanta as the 7th best city to live in. That is neat.

What else did I do today? Um. Took a really long nap. The heat kinda really got to me. Oh, before I took the nap I got lost. Really lost. Lol. I had to actually get the map out from the backseat to figure out where the hell I was. Turns out I made it all the way to the south of Atlanta…the complete opposite direction of where I needed to be. After I finally figured it out…I took my nap. Then I bought a TV – yea! And uh.. that’s about it. Good day if you ask me! Who knows what’s in store tomorrow.

OH… today is my Nanny’s 98th birthday. She’s my Great-Grandma on my Mom’s side! How cool is that…98. Wow. I also read in a book today that the average life expectancy is 76-years-old; way to go Nanny!