Went running again this morning. Logged 4 miles this time. It felt good, real good. The best part about today’s run (well there were two good things) was that it was foggy the entire time. Not just a little fog-around-the-corner type of fog, but the I-can-barely-see-in-front-of-me kind. It was awesome. Not to mention, the fog was spraying me with mist every once in awhile, which was more than pleasant. It gave me flashbacks to when I lived in England. That was one of the most enjoyable things about living out there. I LOVE the thick fog that was out every morning and night; everything seemed so serene and perfect – ahhhh!

The second fantastic thing about my run was that I changed my route a little bit (see below): 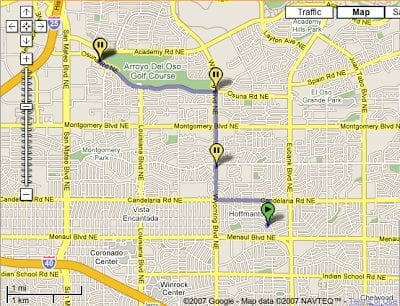 Since I had a long run yesterday along the same route I’ve been going on I decided to change things up a bit. Instead of going north, I ran west – downhill!!!! It was easier on my psyche, but just as hard on my body because I had to control myself from the gravity. Still had the runner’s high afterwards-woohoo!!

This weekend I’m going up to Red River (talk about more serenity!) for our little family tradition. That’s funny, I sad “little” and “family” in the same sentence. My family is nothing but little. We rented only two rooms this year though because not everyone can make it. Last time I went up there it was with almost all my cousins and it was the day after Thanksgiving. It snowed while we were there ☺ I’m just expecting it to be cold this weekend.