Ah, know what just tumbled into town? That would be the Tumbleweed Snowman!!! It’s beginning to look a lot like Christmas in good ol’ Albuquerque! The next thing we need up is the Christmas Tree on Lovelace. That goes up the first week in December, I believe. Oh, if any of you are curious as to the origins of Mr. Tumbleweed Snowman, I suggest you pick up a copy of Albuquerque the Magazine and read all about him.

I woke up yesterday with a feeling that I was about to come down with something, so I instinctively took some Umcka – this crazy medicine my mom found and downed some Emergen-C. Later that night I got the sore throat and a stuffy nose. I went to bed early and woke up with a very scratchy voice. Yuck. I’ve so far managed to set up two more interviews for December, conducted one interview with an amazing woman (read about her in March 2008) and I’m about to be on my way to meet with the executive chef of Marcello’s Chophouse. *deep breath* Then I’m going home and resting.

Tomorrow’s going to be a HUGE day. It’s the ‘Best of the City Party’ at Santa Ana. Basically TONS of the winners in our latest Best of the City issue are going to be there with there sampling the ‘best’ (insert name of category here). It’s bound to be a great time. Problem is, I have to be out at Santa Ana Casino at 8am. I know, crazy. So I’m gonna try to get as much rest as possible today so I can be ready to have fun tomorrow.

DAMN. The Emergen-C and Umcka I just took has given me a crazy bout of energy. My hands are even shaking. Yikes.

Ok…off to go meet another awesome person in the Duke City! 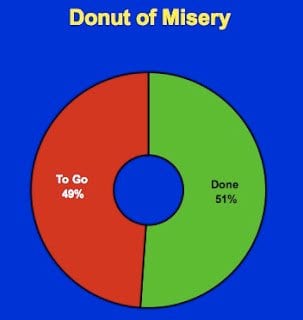 Over the weekend my Donut of Misery* said we’ve reached our halfway mark for this deployment.  Half way. I can do this. We can do this.  If you’re reading this…

For the past two weeks I’ve put miles of wear and tear on my really crappy walking shoes; I’ve seen the sights of the United Kingdom—from the rural farms to…

1. you made Awesome Sauce for our anniversary dinner and it was soooo good! 2. the Italian green denim cotton undies I got you suit you well 😉 3. thanks…

Sorry for the slacking of posts. I blame Kenny, really. Since he and I have been able to chat online more often I haven’t had the need to complain about…

Here are my answers to Wife of a Sailor’s questions: What is something you wished you’d learned to do earlier in life?   Sew. I’m sure it’s something I could pick…

I’ve heard that weddings can bring out the best and worst in people, and friends, I’m here to admit that this wedding is officially showing my dark side. Do you…