***** I’m about to rant AND stereotype. Consider this your warning****

Last night after work my mom called in a pizza to Peter Piper. We used to go there for every birthday as a child, and I personally like their pizza, so we occasionally get it for dinner.

So. I drive to PP and after circling the parking lot once, I finally find a spot. I walk through the doors and the first thing I notice is a picture very similar to this one off their web site: 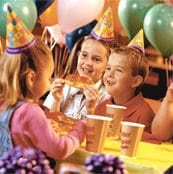 I continue into the restaurant towards the register to pick up my pies, but get stuck in a line. In front of me I smell cigarettes (the kind of smell that sticks to clothes after awhile) and behind me I smell pot. I can smell marijuana in a children’s amusement restaurant.

If that’s not bad enough, the woman in front of me is with her two kids. Now there is absolutely nothing wrong with this except that she was born in 1989. I know this because she was taking FOREVER trying to decide what to order and left her ID on the counter. The oldest child looked to be at least four – they were both calling her “Mommy,” which is how I’m assuming they’re hers. Ah! It was just crazy to see someone so young with two kids.

So with the cigarette-smelling, young mother and pot smelling guy behind the situation, there were still more things upsetting with my Peter Piper adventure. It turned out that I was the whitest person in there. Seriously.

EVERYONE else (with the exception of looking in the “game” area) were more Hispanic looking than I am. A lot of the guys in there were the type that scared me when I was younger (I was a scaredy cat a lot) – they wore the three-sizes too big for them jeans with equally as large shirts, three guys I saw had hair nets on (and I doubt they just came from working at a cafeteria) and tattoos covered their arms (nothing against tattoos, it just would have scared me when I was younger…and maybe last night a little bit too.).

Anyway. The point of this whole thing is that the demographic there last night surprised me. A lot. The experience was almost like the time I went to to the WalMart in El Paso, it was a little bit of a culture shock in a way. So that’s my ‘rant’ or stereotyping, or whatever. I don’t mean this to be offensive to anyone; it’s more of an observation.

…… In other news! Yesterday was Raphael’s birthday. Not only is he one of my favorite artists, but I found out that he was left handed. This is interesting because thanks to my new “Left-hander’s callendar.” This is my favorite by him: 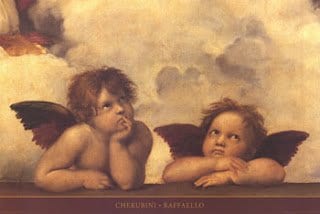 I have this picture hanging above my bed – it’s traveled with me everywhere and I absolutely love it!

That’s all for today 🙂