So here’s how this particular post is going to work; I’m going to reveal something very personal about myself and you’re not going to judge me, mmmkay? Oh yeah, it’s also going to be long, so I’ll break it up with pictures, because people like pictures, right?

Hokay, here we go then. Hi! My name is Jessica and I’ve been overweight the majority of my life. 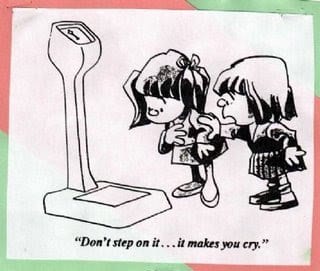 Now, don’t get me wrong; according to doctors I’m very healthy. But despite being an active person most of my life and not being a fan of sweets (although I do like an occasional frosting-less cupcake!), I’ve always been the bigger gal in the crowd.

Middle school was a horrific time in my life and I still hold resentment towards the girls who let the words, “Jiggle, Jessica, jiggle,” pass their lips while I tried out for the school’s basketball team. Luckily middle school was short lived. 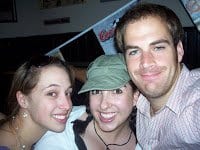 I found true friends in high school who loved and looked past what size I wore; in fact, I’m still best friends with several people I met my freshman year of high school, which I think says a lot about friendships and the character of these people (several of whom are going to be in and at my wedding!)

While I never did the yo-yo dieting, I did become a very unhealthy vegetarian for about a year in high school and even though I lost a lot of weight, I did it the wrong way and gained it all back when I reintroduced beef and fish into my life.

Over the years I learned to dress myself in a way that (I hope) flattered my curves, and I focused on making my personality be the focal point of who I am. Romantic relationships were always a hit or miss with me, mostly because I didn’t feel comfortable enough in my own skin to be comfortable around someone else.

In college, I gained the freshman 15 (eeerrr…maybe it was more like 25), but I was becoming even more at ease with who I was as a person, and on top of that I was working out a lot more, and was once again surrounded by a close group of friends who accepted me for me. 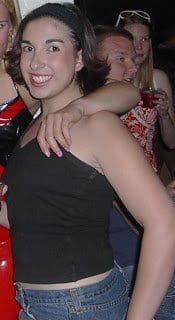 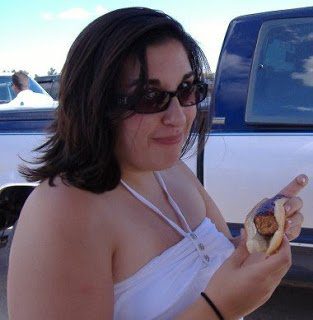 After college I trained for a half marathon (to stay in shape and for personal reason) and I didn’t lose a single pound. Did ya catch that? I ran 13 miles and clocked in hundreds of miles during training and my weight stayed the exact same. Now before you tell me that I probably lost inches, I’ll just stop you right there. Everything stayed the same. 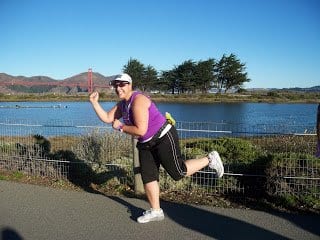 When Kenny came into my life he impacted me in a remarkable way. From the second I met him he’s told me I’m beautiful, sexy, breathtaking, and the most gorgeous woman in any room. And you know what? I actually believe him! He makes me feel like a supermodel, because he treats me like one. He makes me love being in my own overweight, hot and sweaty, sometimes bloated, skin.

On January 15th of this year I finally decided to do something for myself and I joined Weight Watchers with my mom. She had then lost around 20 pounds (now she’s lost 30), and I liked the premise behind the program: it’s not about a quick fix; it’s about a healthy lifestyle. I also signed up to speed walk another half marathon (and this time I did lose weight).

I signed up for WW in January for a few reasons, and I’ll admit that the first one on my list was because I wanted to look good. The second was because even though Kenny hadn’t proposed yet, I knew (okay, hoped!) we were going to get married someday and with marriage eventually comes kids, and I want to be the cool mom who has the energy to keep up with her kids. My third reason for joining WW was to learn a healthy way to live. Weight Watchers doesn’t deprive you of food. You aren’t told, “Step away from the French fries and cupcake.” You’re instead told, “Maybe instead of eating a large fry you can get a kids fry and still be satisfied,” or “If you really want a cupcake, make them yourself with healthier ingredients.” (And my fourth reason is because I want to look amazing in my wedding gown. There, I said it.)

A month after I joined WW, Kenny proposed! I was steadily losing weight from January to April (I lost 13 pounds just by working out and making healthier choices), but for the past two months I’ve been at a complete standstill; I’ll lose one pound and then gain two the next week. Wash, rinse, repeat, and that’s been me for the past two months.

Yesterday I made a decision to kick-start this Weighting Game into full gear again. That means drinking enough water, getting enough sleep, cutting out the booze, which I really don’t drink much of anyway, and making healthier decisions. I’ve been doing Bridal Boot Camp for five weeks (can you believe it’s been that long already?) and I know I’ve gained a lot of muscle, so I definitely want to continue keeping that sort of workout up, but I also need to kick my workouts on y own up a notch, too.

I guess I wrote this (very long) post, because on top of everything else I write about on here, I’m going to start including more of my weight loss journey, all the good, the bad, or yummy recipes I find along the way, because strength in numbers and accountability helps, so what better place to talk about it is there than here?

Whew! Talk about a show and tell. If you read all of this I applaud you, now—so I know I didn’t just write more than 1,000 words for nothing—please do something for me (pretty please?). In the comments below, leave me some words of encouragement, why you think it’s important to be healthy, or anything else you’d like to say.

Oh, and one more thing…Happy Friday 🙂