I want to thank each and every one of you for your kind words about my last post via comments, email, and Facebook. Preparing for the unpredictability with the military is something I may never fully grasp; I can only hope to learn from each experience and handle the situation better each time. Knowing I’m not alone in this, and that people out there are supporting me means so much.

I have so many DIY projects that I want to work on—cake flags, cocktail hour activities, pomanders, invitations, guest book, photo cards, and more—but since I’m dealing with the move, possible deployments and leaving my job, those projects are just getting pushed back a few months. In the mean time, you get to hear more about my ring and a couple vendors we may book in the next couple weeks (I’ll give you a hint: one smells sweet and the other tastes sweet.)

So, here’s the latest with my ring! Last time I showed you my ideas, so here’s the first outcome after seeing the wax mold he made. The wax used, he told me, is a deep shade of purple, almost maroon, and gives the illusion of looking bigger than it actually is. You know how wearing dark clothes makes you appear thinner? Well the opposite is true with this wax – it makes it look bigger…just keep that in mind: 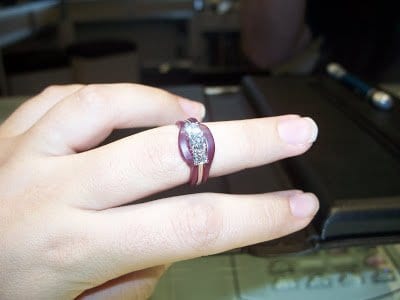 It’s still hard to visualize what I’m doing with this, and actually I’m having him tweak it again, but they’re going to curve in and then go into the band and they’ll both match each other. It’s being made in white gold and he’s making the band closest to the three stones thick enough to put little “baby” diamonds in later if I want. 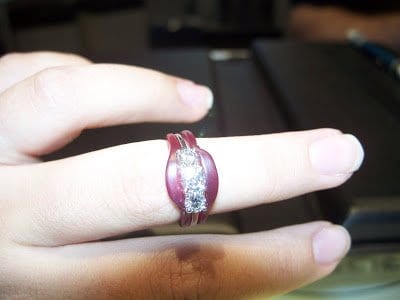 In the picture above you can see the illusion of the wax. The wax closest to the thin part of my band are the same width…but it sure doesn’t look like that.

While we were waiting, there was a man there who was waiting to talk to Paul The Jeweler about designing a custom-made engagement ring. He called Paul the “Einstein of Jewelry,” so I’m pretty confident that it’s going to come out looking fantastic. 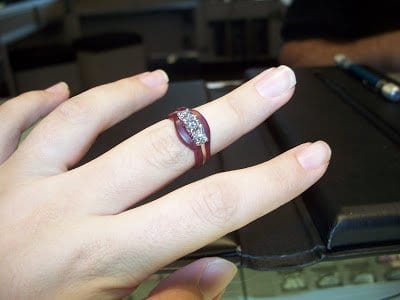 My overall plan with the ring is to just have one ring in the end, so the two bands will be soldered to the e-ring. The next thing I need to decide is this: Do I want to attach ONE of the bands once he’s finished, sport an “unfinished-looking” e-ring for six months and then solder the other side and complete the ring a couple days before the wedding. OR just wear my engagement ring along for six more months and get them both soldered together just before the wedding?