One of my absolute favorite things is cooking with my fiance. (Oh, and by the way, I really can’t wait to call him my husband. This whole “fiance” thing kinda sounds pretentious to me in a way, but more on that in a later post.)

Today Kenny and I woke up early, because we had important things to tend to: there’s a chili cook-off at his squadron today and we are on a mission to win! The prize is bragging rights for having either the spiciest or the tastiest chili. And since we have a love for all things hot, we’re crossing our fingers and toes that we’ll win for the spiciest.

I did the prep work yesterday and this morning we got to work on making Guy Fieri’s Dragon Breath Chili Recipe, with a twist. The recipe calls for three Anaheim chiles, but we took that a step further and used seven HOT Hatch chiles; we upped the jalapeno count and added some extra heat here and there. Let’s just say that we may want to put a “Caution: HOT” sign on the front. 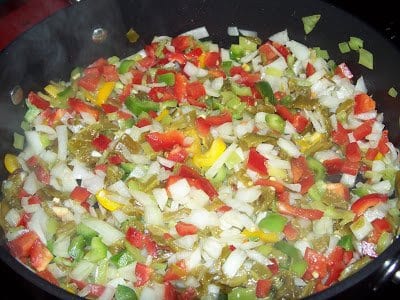 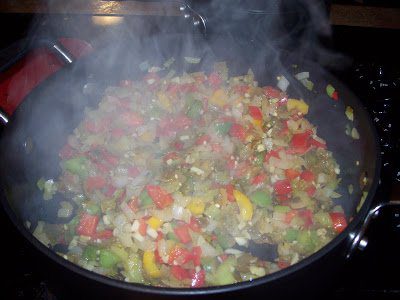 The aroma at this point was so overwhelming that Kenny and I had to break out the Kleenix. Not only were our eyes burning, but we were sneezing (far, far away from the pot o’ chili, I promise!), and coughing…all the signs of some nice flavorful heat.

At this point, my camera decided to not take pictures, so you don’t have any visuals of the Italian sausage, chuck, or beef browning, but here’s what it looks like right now in the crockpot: 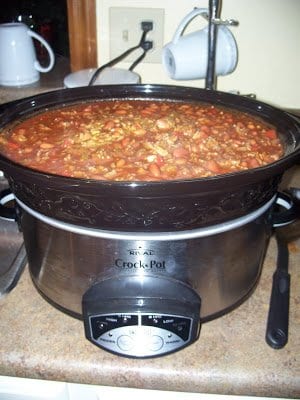 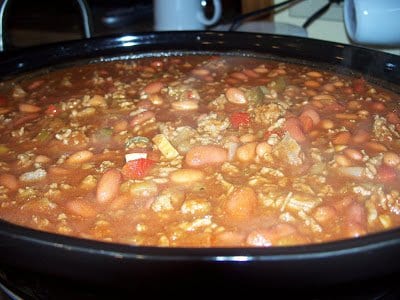 Oooooh yeah, baby; that’s some fine looking chili! The cook-off starts in a few hours, and I’ll be taking my (fickle) camera with me, so hopefully this weekend I can post pictures of all the chili on hand.

Till then, I’ll leave you more pictures of food. This was from our dinner last night, and let me tell you; if Mama Mia herself could have tasted this dish she would’ve given it two big thumbs up.

What you’re about to look at is a plate full of The Pioneer Woman’s Chicken Parmigiana. 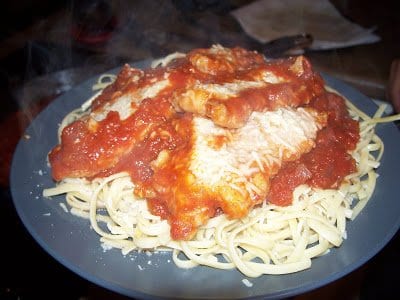 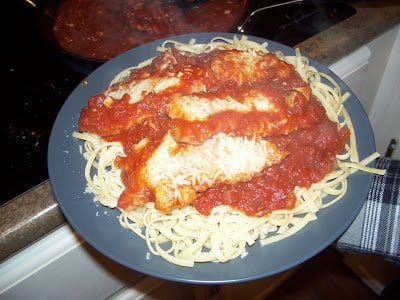 This meal came out so good that I think it was better than some of the chicken parmigianas I’ve paid for in restaurants. Do yourself, and anyone else who likes it, a favor and make it as soon as possible.

Wow. Look at me being all domestic! I love it 🙂

(Oh, and today marks 99 days till the wedding! Yup, we’re officially in the double digits….whoa!!!)