I have a serious problem when it comes to making decisions. Serious as in, I’m a flip-floppin’, topsy turvy, can’t-make-up-my-mind-ever, kind of girl. Not being able to make a clear cut decision was never a problem before I had this whole wedding to plan, but the second he slipped that ring on my finger, all of my decision-making capabilities jumped right out the window.

Every category that needed a major decision (colors, flowers, what the guys will wear, etc.) went back and forth a countless number of times. Not only was I gettting irritated with myself, but Kenny was beginning to feel my frustration—even if he was 1,500 miles away.

So, thanks to Saesame Street (ha! Who knew!), we came up with a solution to bury this problem. A darn good solution, albeit a funny one, too.

We decided to come up with a word—a code word, if you will. This word would be a super secret buzzword, and whenever we (or I) are (am) trying to decide on something, we both say this word and the decision would be finalized. Still confused? Here’s an example of a conversation we had our buzzword about the wedding colors, of all things:

That was seriously the same conversation we had over and over for about a week. It was annoying for both of us and we needed a quick solution. Then Kenny picked a word. It’s such a completely random word, and it makes me giggle every time we say it, but it works. When we’re deciding something and think we have a final answer, I’ll say the word and he’ll say it back, kind of like we’re sealing the deal and confirming the decision.

So are you ready for our word? Okay, it’s… 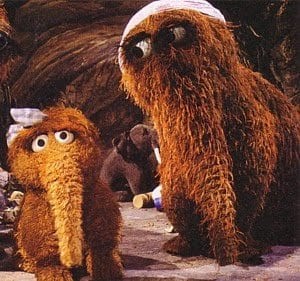 Yup, as in Seasame Street’s Aloysius Snuffleupagus. (And just for the record, I pronounce the word like “Snuff-a-luff-a-gus,” while Kenny pronounces it like, “Snuff-a-luff-bagus.” Typing out the name with it’s correct spelling makes me laugh even more.)

I love our decision-making buzzword! Do you have an inside joke/buzzword to help you decide decisions? Or are we really just that weird?