One thing I love about weddings is how a couple tributes their culture and heritage throughout the event. After all, weddings (and funerals) are usually one of the only times when entire families get together, not to mention, it may be the only time the newlywed’s entire family mingle.

My favorite cultural tradition has to do with a little dancing, a lot of clapping, and a whole lot of fun. If you’ve ever played follow the leader—or been in a conga line for that matter—then you would have no problem dancing in La Marcha. 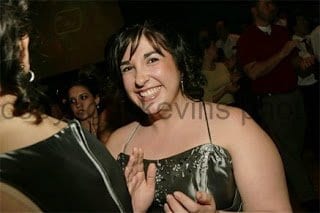 (me clapping along with La Marcha at my cousin’s wedding)

To explain La Marcha I’m going to shamelessly retype part of an article *cough* that I wrote *cough* from Albuquerque The Magazine’s Bridal Guide 2008.

(If you want to hear the song that’s played with La Marcha, click play and listen below as you read about it!)

Where it Originated: There’s no official record of when or where dancing La Marcha at weddings began. But the song most often played for the march is by Genaro Codina Fernandez from Zacatecas, Mexico (and is Mexico’s second national anthem).
Why the Tradition Carries on: La Marcha is often performed at Hispanic weddings as a way to present the new bride and groom to the congregation. Everyone participates—it’s a way of letting the newylyweds know the guests support them in their marriage.
What to Expect: The dance begins with the wedding party following two designated leaders (usually related to the bride or groom) in a procession around the reception hall. Guests then join as couples, and fall in line behind the party. The lines separate, circle around each other, and create “tunnels”—people raise their arms for the newlyweds to pass underneath. The dance ends as a circle is made around the new couple, who then dance alone, surrounded by their guests. 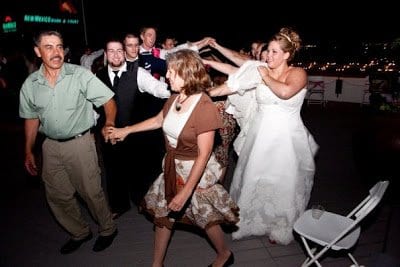 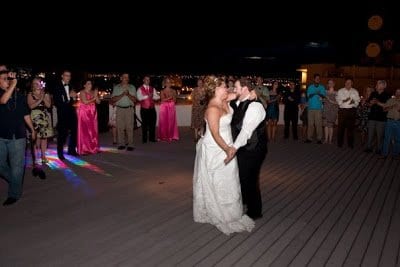 (Pictures from La Marcha at my brother’s wedding)

What Part You’ll Play: If you choose to dance, grab a partner and follow the person in front of you. But even if you sit out, you can participate by clapping along with the music and taking pictures of the elaborate train of people.
The Music: “La Marcha Zacatecas” or anything upbeat that can be repeated—La Marcha can last several song lengths.

That’s all I wrote on the subject, but I also really like what this photography studio down in Las Cruces has to say about the tradition, so here’s an excerpt from Screaming Light Studios (and a photo from them, too).
“La Marcha starts as a long chain of couples of two. To start the dance, everyone dances around the room in a circle, which signifies life. Soon, the couples split apart; the men go to one side of the room and the women to the other. This represents the first fight between the bride and groom. Each couple soon comes back together, representing the bride and groom making up. The dancers next join together in groups of four or more, signifying the growth of the family. 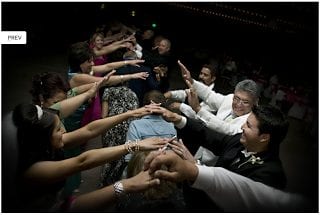 Then, a single line forms and snakes around the room, showing the twists and turns of life. At some time during the dance (the timing varies from family to family), the couples join hands over their heads in a bridge, representing the bridges that must be built in life; this may also signify the Tunnel of Love (since the newlyweds pass under, and then become part of, the bridge of joined hands). At the end, everyone makes a circle around the bride and groom, showing their love and support of the newlywed couple.”

This dance is so much fun that I wish everyone could experience it! Have you ever been part of La Marcha or is there another cultural dance you participate in at weddings?