I know, I know… It’s been almost an entire week since I’ve posted, but I have a really good excuse: The wedding is in 11 days! Whoa! We’re two days away from being in single digits and instead of feeling the pressure to get things finished, I’m starting to get giddy and excited.

The highlight of this week is that my to-do list is actually slimming down instead of growing! My goal is to finish everything—or as much as I can—this week so I can relax and watch girly (aka wedding) movies next week. I have a massage, facial, manicure, and pedicure scheduled for next week, but the thing I’m looking forward to the most is seeing Kenny again on Wednesday.

We’ve gone through four years of being in a long distance relationship, but this last stretch—the last two months—have been incredibly hard on me. He’s been in Georgia studying and flying more than normal for an upgrade he’s receiving at work, and because of that, communication has been a little more limited than normal.

This past Sunday was my bridal shower and bachelorette party, and the best way to describe the day was that it was an absolute blast! I don’t have any photos of the bridal shower (my sister-in-law was taking photos and I haven’t seen them yet), but being surrounded by the women in my life—my family, friends, and coworkers—was a memory I won’t soon forget. I’ll post photos soon, because my friends did an excellent job of throwing a bridal shower 🙂

I do have one picture I can share with you and it’s from the bachelorette party. This pretty much describes my entire day: 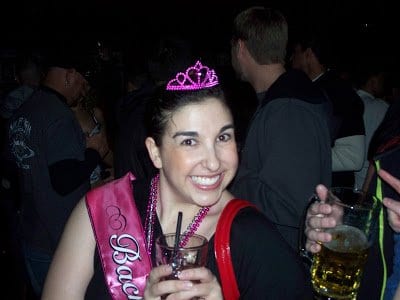 I was constantly smiling from ear to ear!

We started the night opening presents (ahem…lots and lots of lingerie!!!) at my friends’ house and then we went pole dancing. Oh yes, you read that right! We took a two-hour long “Pole Party” class that was so unbelivably fun. There’s nothing like dancing around in platform heels with your favorite girls surrounding you. Not to mention, it was a pretty good workout! After pole dancing we went downtown for some drinks, more dancing, and a whole lot more fun.

We had so much fun that the majority of us were feeling it the next day. I completely missed out on a Super Bowl party, because I was sprawled out on my couch praying that the room would stop spinning. We may be able to party like we’re still in college, but we definitely don’t recover like our former college days.

Okay, it’s time to get back to crossing things off my to-do list!