If you missed my post earlier this morning, my husband and I are conducting our own Pizza Week where we are making—and eating!—homemade pizza for an entire week.

We made our dough for Day Three twenty-four hours in advance, and doubled the recipe so we could have several crusts ready to go for the next couple days. This time around we used The Pioneer Woman’s recipe for a crust. Her recipes, including this one, are simple and some how come out almost exactly the way they’re supposed to, which is one reason I consistently go back to her for recipes (see “Verdict” for what I thought of her crust).

Today was an ambitious pizza-making day, because we didn’t just make one pie. Nope, that’d be way too easy. We made three 🙂

We saw this idea in The Food Network Magazine (*side note: I devour that magazine the second it’s in my mailbox, and highly suggest you subscribe*) and instantly knew we had to give it a try. Basically, you take all your favorite breakfast foods and bake it on a pizza crust.

I cooked some turkey sausage and sauteed mushrooms, onions, and sun-dried tomatoes. Our “sauce” was a very thin layer of salsa (we used Sadie’s “hot,” for those wondering!), followed with our sauteed veggies, a sprinkle of fresh basil, and then some shredded cheese. 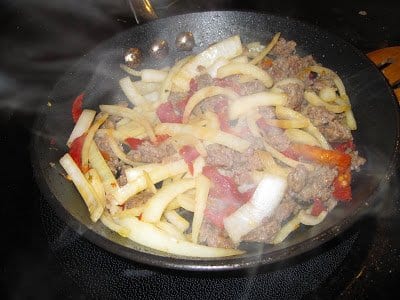 And then came the fun part! We cracked four eggs right on the pizza and slid it back in the oven for a few minutes. 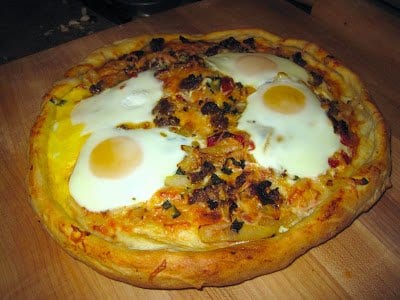 Verdict: The end result was soooooo flavorful. First, the crust. Not only was it perfectly crispy and crunchy, but it was also a little chewy. It gets an A+ as far as crusts go. We’ve been cooking all the pizzas on our new Calphalon pizza pan and then taking it off and letting it cook on the rack for a few minutes to get it nice and crispy. 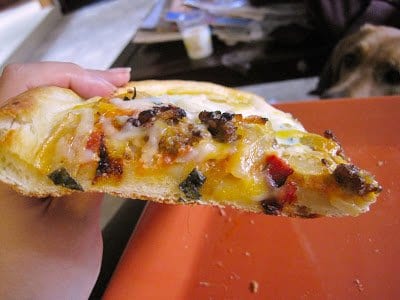 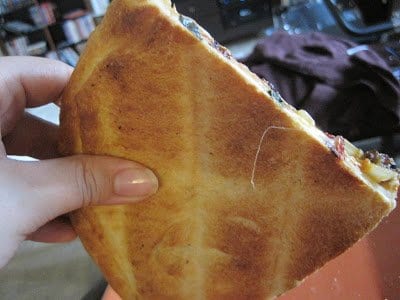 The toppings for the pie all worked great with each other and the salsa added a kick to the whole shebang. The only thing I would change would be to not let the eggs cook quite as long. We were excited for some gooey yolk, but instead they came out pretty hard-boiled.

We may be making this one again with a few tweaks, like making a “well” for the egg and cooking it a little less.

Day 3
Steak and Alfredo AND Pesto

One of Kenny’s favorite meals is Olive Garden’s Steak Gorgonzola Alfredo so we made that our inspiration for this pizza.

Like all the pies we’ve made so far, this one was simple: He put a layer of Alfredo sauce while I sauteed mushrooms and onions, and then put a layer of raw steak strips sprinkled with a little salt and ground pepper. 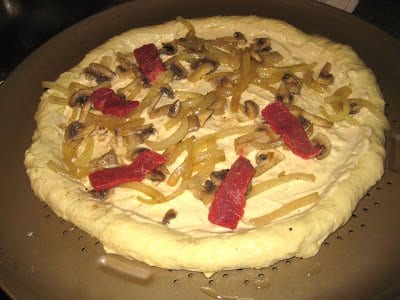 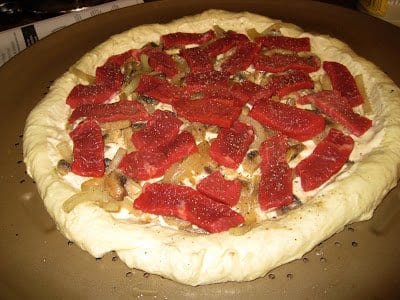 Top that off with a little fresh Parmesan cheese, pop it in the oven, and there you have it! 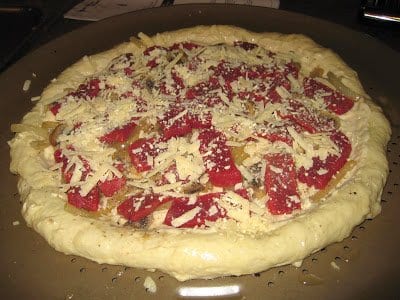 Verdict: In his own words it was “pretty fraking awesome.” 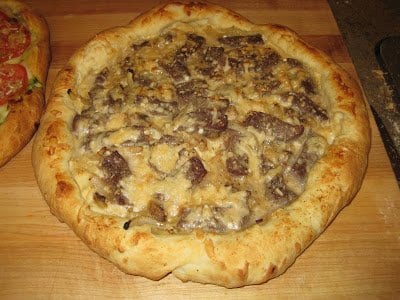 Yup. I completely agree; this one was so delicious I know we’ll make it again.

Inspired by leftover pine nuts and fresh basil I saw at the store, I decided to make my own pesto. Not only was it unbelievably easy to make, but it tasted just like pesto from a jar! Anywho, back to the pizza.

I spread a layer of the pesto on the crust and sprinkled some salt over the whole thing.

And then I put a layer of mozzarella cheese. 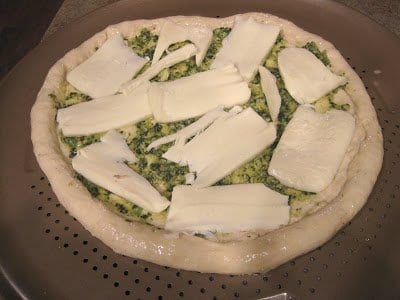 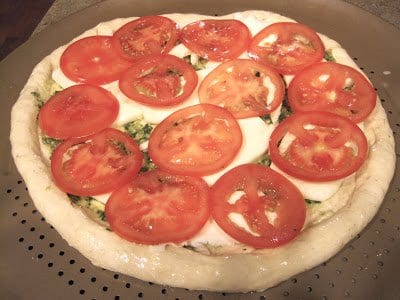 …and a little fresh Parmesan cheese. 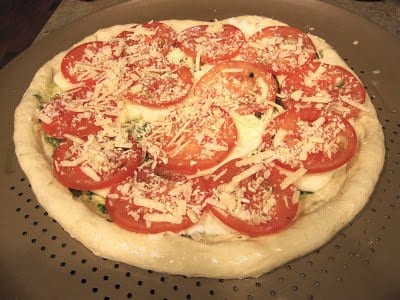 Verdict: Oh. Em. Gee. It was so simple to make, but so flavorful that I can’t wait to eat my leftovers tomorrow. 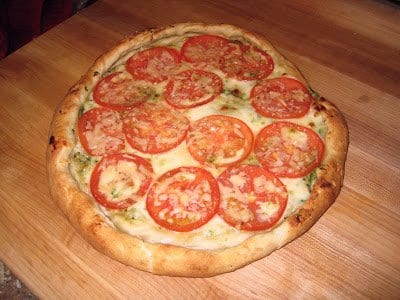 We’ll be making this one again, too.

Our dinner tonight was the perfect combination of a hearty pizza with a fresh and simple veggie pie. We only ended up eating half each, which means we have leftovers! 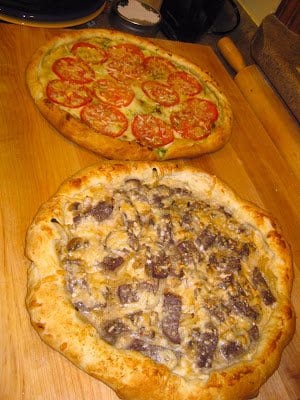