While Kenny and I were on our honeymoon we had a gastronomically genius idea. Are you ready for this? Eat pizza for an entire week. One. Entire. Week.

We’ve been wanting to make our own crust for quite some time and I wanted to get out my usual mushroom, onion, and turkey pepperoni pizza rut. Even though it’s my favorite type of rut to be in, I want to be more adventurous with my pizza noshing.

Pizza week officially began on Friday and will end this coming Thursday, so here’s what we’ve created so far:

We own the Good Eats book by Alton Brown and attempted this recipe for our first crust. We kept the toppings simple—I had my “usual” and Kenny made a white sauce pie with sun-dried tomatoes, artichokes, and green chile.

The dough for the crust was extremely sticky and ridiculously hard to shape and stretch, but since we’ve never made pizza dough before, we weren’t sure what it should be like. (It turns out that we didn’t kneaded it long enough and should have left it in the fridge much longer…) 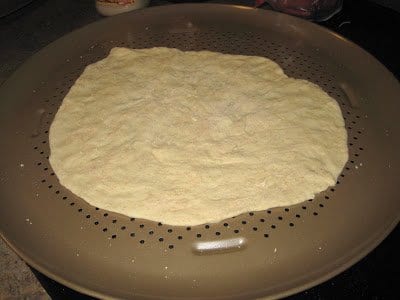 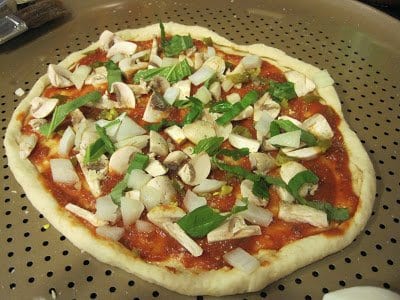 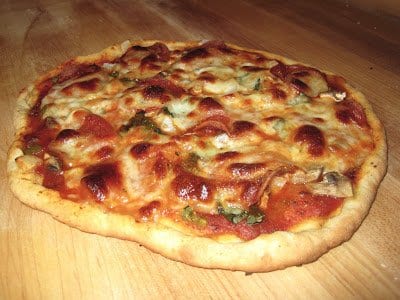 It looked deeeeeelicious when it came out of the oven, but the first bite (for me, at least) was really disappointing. The crust was way too thin, extremely chewy, and although it looked crisp, there was no crunch.

Verdict: It was a decent first attempt at making our own pizza and we’re going to try Alton’s method again later in the week.

Since we didn’t realize pizza dough needs to sit in the fridge for at least 24 hours, we didn’t have any prepared dough for Day 2, so we went with our staple Whole Foods standby.

This is my favorite pre-made crust and I try to have at least one package in the freezer for any night that I’m craving pizza. I was too lazy to go take a picture of the package, so I grabbed this from Google images. I use their white crust, though, because it’s actually a little better for you than their whole wheat (you can find it in a similar package, but instead of green everything is red): 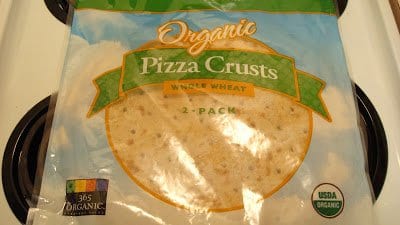 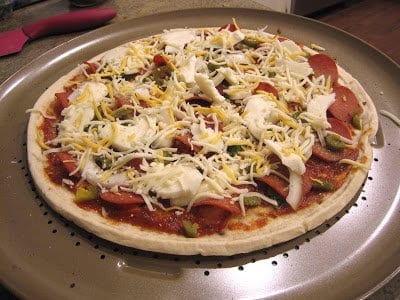 Verdict: It’s a great quick and easy pizza to make when you’re craving a “homemade” pizza and have very little time to make it.

Come back this afternoon to see what we made on Sunday. All I can say is that they were ridiculously delicious. Just sayin’…