My experience with Fleming’s Prime Steakhouse kicked off a couple months before I ever stepped foot in the contemporary steakhouse and wine bar.

One night, while my husband was TDY (basically like a business trip), he called to describe the most delicious steak he’s ever consumed. Ever. He used phrases like “melted in my mouth,” “flavorful beyond belief,” and “I never want to eat any other steak again.” Clearly, my husband was speaking behind steak-scented goggles, right?

Luckily, I didn’t have to wait long to find out this steak was that had my husband intoxicated. He did some research and found out there’s a Fleming’s in Atlanta and suggested we go there to celebrate our sixth-month anniversary. (When you’re in a military couple you celebrate the little things.)

We made plans to make it up there on August 20, but of course the military had plans of their own and delayed our date night two weeks. But boy was it worth the wait, especially because we were able to coincide our night out with celebrating the fact that my husband is putting on Captain this week!

Like I said above, my experience with Fleming’s began before stepping foot inside: First it was when my husband practically drooled whenever he talked about it, and second was when I called to make our reservation.

I’ve made my share of reservations, but this one takes the cake…or would that be steak? The woman on the other line at Fleming’s talked to me like I was an old friend, but still had an extremely professional demeanor to her tone. She asked me several questions in order to make sure she had her bases covered (do I know how to get there, are we celebrating any special occassions, etc.), asked for my email address to send our reservation confirmation, and repeated all the information I gave her to make sure everything was correct.  By the time we hung up I was already swooning over this place.

My husband and I were welcomed and taken right to our candlelit booth. The hostess sitting us made small chit-chat, but it didn’t seem forced and her smile was welcoming. She handed us a gigantic menu—the wine took up the first four pages—and I dove in. I wasn’t sure which wine to choose, but our waitress seemed well versed in vino and helped me pick a delicious bottle of Pinot Noir.

As a starter they brought out a delicious homemade bread with two specialty butters, and I followed my husband’s advice by splitting an order of “The Wedge” for a salad.

Talk about delicious. I’m the first to admit I think it’s highway robbery for a restaurant to charge your arm and a leg for lettuce—especially iceberg lettuce—but combine it with blue cheese, red onion, cherry tomatoes and blue cheese, and make it look delicious and I’m soon hypnotized over the exploding flavor so much that I’m dismissing the price.

For our entrees, we both picked steak for obvious reasons. I opted for what my husband got last time, the “Porcini Rubbed Filet Mignon” and he got the “Main Filet Mignon.” We also selected two sides: Roasted Garlic Mashed Potatoes and Sauteed Mushrooms. 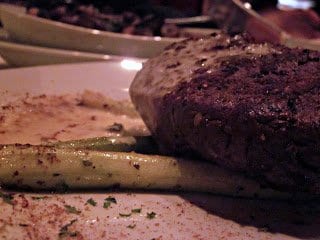 I wish I could let you experience the the first bite of my steak, because it was absolutely perfect. I would actually dare say it was orgasmic, but since my family reads this blog I won’t directly say that. But seriously? It was the most flavorful, tender, melt-in-your-mouth piece of steak I’ve ever had the the pleasure of devouring. And devour we did, bite by bite. Towards the end I noticed my husband and I were cutting our pieces of steak even smaller so we could let the flavor linger just a little longer. We both ordered our steaks medium rare and it was cooked perfectly and wonderfully seasoned, but then again, that’s what you would expect when a steak was aged for four weeks and then broiled at 1600 degrees.

But all good things must come to an end. As much as I told myself I would only eat half my steak, I ate the entire thing and we both may or may not have practically licked the mushroom and potato bowls clean. We were happy campers, but the crazy thing is that we weren’t actually full. Happy, satisfied, and extremely content, yes, but we didn’t have that stuffed heavy feeling. So when the waitress came around and asked if we cared for dessert, we couldn’t resist. 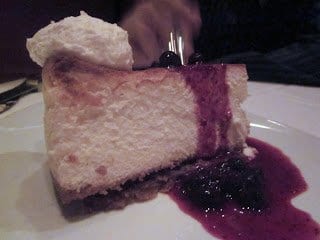 As boring and simple as this may sound, we went with their New York Cheesecake. And like everything else at Fleming’s, it didn’t dissapoint. This cheesecake tasted like it was made from heaven. It was light, fluffy, airy, and full of so much flavor that we found ourselves closing our eyes making “mmmm,” “ooooh,” and “yummm” noises at our table. 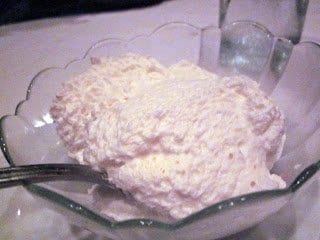 Along side the cheesecake also came a bowl of the best Chantilly Cream I’ve ever had the pleasure of eating. In fact, it was so good that I ate the entire bowl. (Clearly I will not be losing any weight at Weight Watchers this Thursday, but I’m totally and completely okay with that considering how fantastic that meal was.)

Just when we thought the meal and experience couldn’t get any better at Fleming’s, when our waitress handed over the bill she wished us a happy six-month anniversary and informed us that 10% was taken off our substantial bill—delicious cuisine isn’t cheap by any means, but that was an extra special touch that we appreciated.

We’re already saving our pennies (actually, our dollars) so we can experience Fleming’s or another steakhouse of that caliber  for upcoming special occassions. Have you eaten at a steakhouse that left you speechless and completely satisfied?

*My apologies for the awful photos. I clearly need practice on taking pictures in dark, candlelit settings. Maybe I’ll get to go back there sometime in the (nearish?) future and can experiment some more!