Skip to content
Before I tell you all about Italy, I want to share our journey out here. Knowing me, I’d forget to write about it and then it’d be lost forever! I’m sure you all know Murphy (of Murphy’s Law), but just in case you’re not quite familiar, he has a motto that goes something like this: anything that could go wrong, will go wrong. And that is exactly what happened to us.
Our original plan was to drive from Georgia to New Mexico and stop in Florida, New Orleans, and several spots in Texas along the way to see family and friends. We were doing great with our schedule, but forgot to do one little thing before we left: check the weather.
It turns out, Tropical Storm Lee was headed to New Orleans at the same exact time we’d be there. We made the quick decision to skip NOLA and head north until we were out of the storm’s path. My mom was in constant communication with us and kept us informed on the weather. It turns out we were outrunning Lee by just a few miles. Every time we’d leave a town, about 15 minutes later there would be tornadoes or tremendous rain. Whew!

Once in Texas, we thought we were clear from potential danger…until a wildfire threatened to cross the highway in between Houston and San Antonio. We went through a plume of thick, dark smoke, but were safe.

After San Antonio we drove to Austin to see more family. The time there was great, but Murphy must’ve wanted us to stay a tad bit longer. We were an hour out of Austin on a main highway when we were abrubtly stopped by a “Road Closed” sign. We took our second detour of the road trip and went two hours out of our way before we were back on track.

Twelve hours later we arrived in New Mexico and thought Mr. Murphy was finished with his sneaky ways. But, of course, we should’ve knocked on some wood, because he had more tricks up his sleeve. We were giving our car to my brother, but the day before we were supposed to give it to him, the car wouldn’t start. There has never, ever been an issue with this vehicle…until now. Luckily, it was a quick and easy fix (just needed a new battery), but it was still annoying!

We had a great time back in New Mexico. This was the first time my husband and I have ever been home long enough together at the same time to go on a date! We love Albuquerque and soaked up our time there. I have some photos from New Mexico, but I’ll have to post them later.

My parents put together a going away party for us while we were there, which was just fantastic! 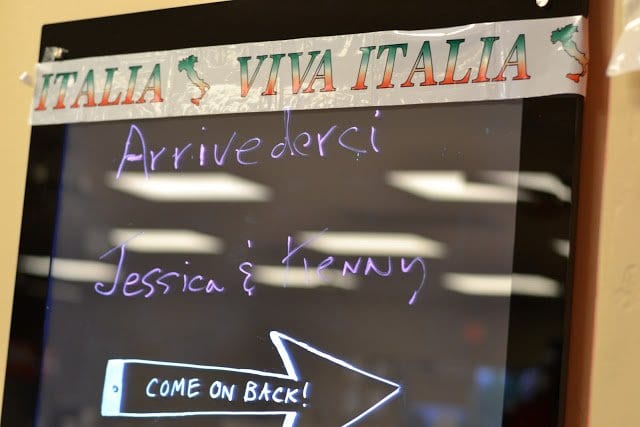 We spent a week in New Mexico, but it went by way too fast, and before we knew it we were at the airport ready to fly back to Georgia. We were minutes away from boarding our plane when I got a call saying that the pet hotel room we booked on base was “down” for maintenance and we’d need to find another place to stay.

Are you freaking kidding me?! The woman suggested I call around to find another place to stay, and I (not-so-politely) suggested that she find us a place since A) she canceled our reservation and B) we’re getting on a plane in a half hour. She called right back and said she found us another place for $40 more a night. Fail, but at least we had a place to sleep that night.

We got on the plane, fastened our seat belts, and turned off our phones when the airline door closed. We were ready to go…but the plane didn’t budge. It turns out there was a problem with the tire and it needed to be replaced. Two hours later, we were finally ready to take off. Unfortunately, we missed our connecting flight out of Denver. And since we missed our connecting flight, we arrived too late to pick up our rental car in Georgia. It was a gigantic mess, but it somehow managed to also be one of the best trips we’ve ever taken.

Not only have I talked your ears off (or would it be written your eyes out?), but I’m pretty tired and will have to continue this tale tomorrow!