Hello! I hope you don’t mind a guest post today, but I can’t hold on to this post much longer—it’s a gem! It encompasses everything I love about traveling, so I hope you enjoy it as much as I did. I’ll be back in a couple days with some pictures of Venice (we took a day trip there yesterday)! Ciao ~Jess

Hello world! My name is Casey and I am a proud Air Force wife currently living in Germany! My handsome hubby David, also known as D, and I moved across the pond just two short months ago. My blog, We Took The Road Less Traveled, is devoted to chronicling my life as a MilSpouse and new our European adventure!

Picture a chilly, rainy night in Germany. Rothenburg ob der Tauber to be exact. D and I drove approximately 3 hours in the pouring rain and stop and go traffic to start a lovely anniversary weekend in one of the oldest, well-preserved walled cities in Bavaria. The red fortress above the Tauber River, as its name suggests. It was completely picturesque. When you think of Germany, this is the kind of place that comes to mind.

Half-timbered houses adorned with boxes filled with brightly colored flowers. Cobblestone streets lined with bakeries, Christmas shops, and charming al fresco dining. I basically melted into my seat as we drove through the fortress walls. We couldn’t have picked a better place to celebrate 4 lovely years of wedded bliss! As we made our way along the cobblestone streets to our hotel, I couldn’t help but notice that both of our tummies were rumbling. Food was going to be at the top of our agenda for the evening, and I knew the perfect place to grab a bite to eat. Little did I know that we’d be getting more than just a tasty Swabian meal…we were about to have one of the most memorable experiences thus far of our stay in Germany. 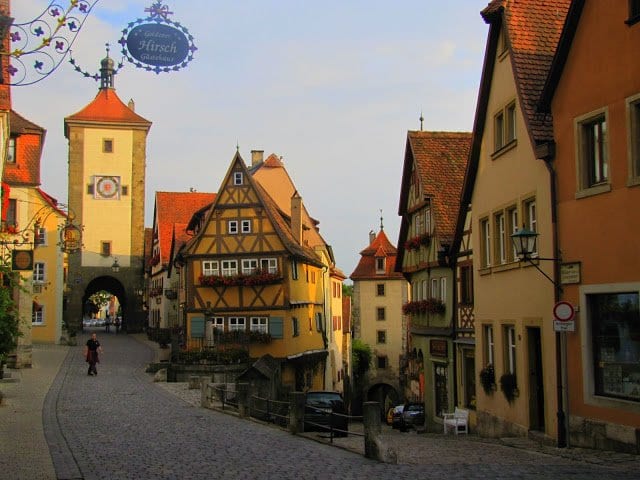 Before D and I go anywhere in Europe, we grab one of Rick Steve’s travel bibles (because they’re pretty much the end-all, be-all of the travel books) and try to take his advice on the top sites to see and best restaurants to dine in. We also take a look at TripAdvisor.com to see what the current top rated hotels and restaurants are in the city we’re visiting. TripAdvisor led us to a place called Burgerkeller. This quaint restaurant was rated #1 and had glowing recommendations for the food and for one other “must-see” attraction…the owner. After checking into the cutest, little hotel I’ve ever had the pleasure of sleeping in, we made our way down the street (literally a 2 minute walk) to Burgerkeller.

As we walked down the stairs to the cellar where the restaurant was housed, we noticed one essential part of the restaurant missing. Customers. The place was absolutely empty, except for one man standing behind the bar cutting radishes. I thought this has got to be the infamous owner, Harry, who I’ve read so much about. Instead of calling him by name (at the risk of sounding like a complete stalker weirdo), I said hello to get his attention and he promptly sat us down at one of the 12 empty tables. We ordered our drinks, a glass of Franconian white wine for me and the usual Hefeweizen for D, and pursued the menu. Everything sounded so delicious, but we finally settled on the traditional Spätzel and Schnitzel for an authentic German meal. Harry came back over, took our food orders and then retreated back to his spot behind the bar. He began by preparing our salads, which were divine, and then he disappeared into the back of the restaurant to make our main course. 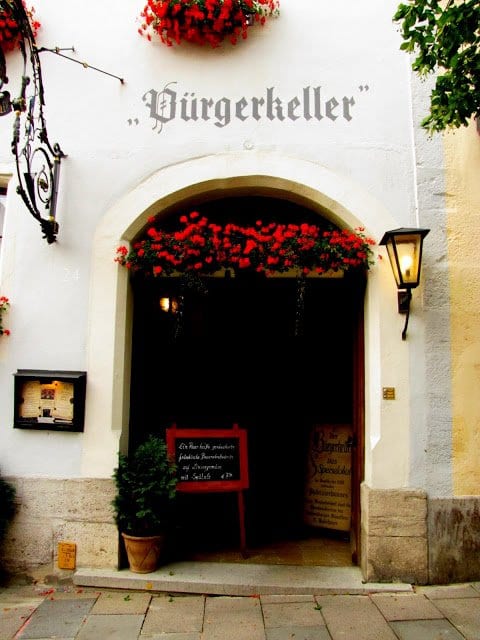 This gave D and I an opportunity to wander around the empty restaurant snapping pictures with our camera. This place was kitschy and it had all the usual German decorations, ranging from the cuckoo clock to the strange medieval mural of various coats of arms. After devouring our salads, Harry finally emerged from the back with our entrees. He sat them down at our table and then looked puzzled. I was immediately confused by his expression. He then asked if we were still working on our salads. I said, “No, they were tasty though.” Then he said, “Oh yes, Americans, how could I forget.” I was a little taken aback by the comment, but my inquisitive nature prompted me to ask what he meant by that.

He proceeded to tell us how German’s signal the end of part of a meal (by placing your fork and knife parallel to each other on your plate) and how basically everyone else in the world doesn’t follow the same tradition making it hard to know when to serve the next course.  I looked down at our plates and we both had carelessly crossed our fork and knife on our plates. We literally never do that. Harry then pointed out that this signaled our intention to take a break and enjoy more salad later. Seriously? What are the odds that we would place our utensils in the wrongest spot possible?  I’m sure my face turned a bright shade of red with embarrassment because Harry let out a boisterous laugh and said he was only picking! WHEW! The last thing I wanted to do is piss off the owner of an empty restaurant in a foreign country. 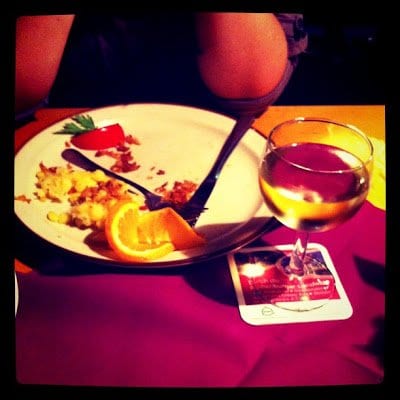 In retrospect, I am so glad D and I placed our utensils in the incorrect positions because it opened up the flood gates of conversation. D and I spent the rest of the night talking and laughing with Harry. He pulled up a chair, poured us glass upon glass of free wine and beer, and we quizzed him on his music knowledge. This guy could not be stumped! Harry is a true music aficionado. He had a CD player behind the bar and an extensive CD collection of artists like Rodney Carrington, Nena, Deep Purple and Marvin Gaye. We listened to 99 Red Balloons until our ears bled. He got such a thrill from popping in a CD and watching us wrack our brains to try and identify the song with only hearing the intro. Of course, the wine wasn’t helping our case. We failed miserably song after song, but Harry would just smile and say, “Guess alcohol does make you dumber!” Touché Harry, touché. 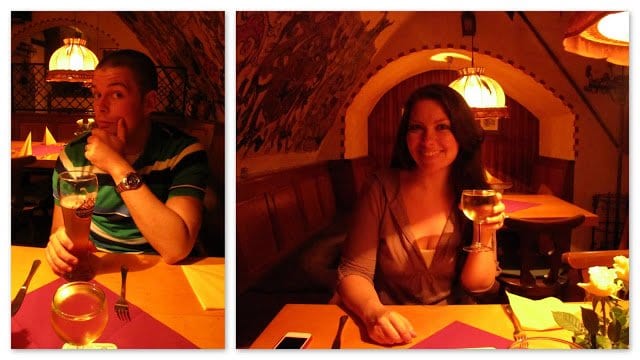 We heard one amusing story after another for almost 4 straight hours. Time was completely lost on us. Harry’s take on the difference between American’s eating in his restaurant and German’s eating at his restaurant were hilarious, and completely on point! He had us in stitches all night. We couldn’t have felt more at home there with him in his tiny cellar restaurant. What’s even more wonderful is that we must have made a good impression, because a couple of hours into our idyllic dining experience, a German family walked in to the restaurant and asked for a table. Without hesitation, Harry turned them away. He said he was quite enjoying the quiet night in with a couple of silly Americans. What a compliment! Turning away paying customers to spend time with a couple of kids who just wandered in for a nice meal. Hands down the greatest, most rewarding experience we’ve had thus far in Europe! Not to mention, the food was fabulous. Best meal yet in Germany, seriously.

My tip to all of you travelers…get in with the locals. It can pay off big and quite possibly be among some of the most memorable parts of your trip abroad. If you ever eat at Burkerkeller in Rothenburg, make sure you ask Harry about his “special stein.” I promise you won’t be disappointed! And Harry, if you ever read this, thanks for the laughs and your heartwarming hospitality. I now love Germany more than ever.