I distinctly remember the first time I saw a movie by myself; I don’t remember how old I was (college, possibly) or what I saw, but I was so nervous I’d look like a loser that I picked a matinee so the theater would be emptier—there was no way I’d want to sit alone in the middle of a crowded theater surrounded by my peers. This was also before I had a smartphone, so there was no distracting myself before the movie by surfing the ‘net. The solo movie experience went off without a hitch. I was absorbed in the film in a matter of minutes and forgot I went by myself.

Next up on the party-for-one adventure was eating a restaurant by myself. Again, no idea when I did this, but it was definitely more awkward than seeing a movie alone. I distinctly remember dining at lunchtime, because it’s usually more casual. I remember thinking every pair of eyes were on me. They weren’t, of course, but it was just uncomfortable. I have no problem sipping java at a coffee shop, but a restaurant was different. You go to a restaurant to socialize and enjoy company. I’ve eaten out alone a few times since I discovered it wasn’t horribly humiliating, but I don’t make a habit out of it or anything. If I’m going to eat at a restaurant alone I tend to go places that are more casual (free wifi, computers allowed, tables for two that aren’t smack dab in the middle of the room, etc.).

I’ve always been a fairly independent woman, but being married makes me extremely comfortable with being part of a couple. I don’t just like hanging out with my husband—I truly love his company. Unfortunately, a deployment means breaking away from that physical companionship and learning to do things on my own. Long story short: I need to start getting comfortable doing things alone again.

Yesterday I was home in the afternoon and started getting restless. I caught up on TV shows and already played outside with Bella, but I was still bored. Instead of spending more mindless time online I decided to do something different. I pondered the idea of going to the bar next door, but hesitated. I’ve been there several times, but always with other people—sometimes places are more comfortable with people next to your side, ya know?

But then I remembered something. Back in the day my friend Jeff and I came up with a saying. While I’m sure we probably wrote this down on a napkin and it probably originally had to do with a boy I liked or something silly like that, this particular quote has helped me through several situations.

Always force yourself into an uncomfortable place. Stay away from your comfort zone in order to develop a new one. Go with the flow.

So with that thought in mind and a book in hand, I walked into the bar next door…alone.

I have no idea why La Dolce Vita intimidates me so much,
but it does. The door is almost always literally open, but it still took
months before I stepped foot in there for first time. I think it’s because I’m still an outsider
here and that’s very apparent when I enter a new(ish) place. 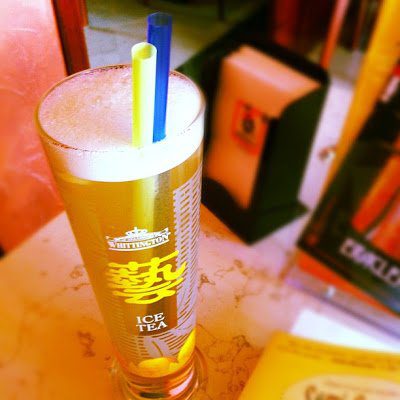 I considered yesterday a baby step. I ordered a mint iced tea and read my book there for an hour. I didn’t strike up any conversations with the locals or anything, but I’m proud of myself for branching out and going there alone. Next time I’ll order my favorite mushroom bruschetta and a glass of wine.

I will not let myself become a hermit during this deployment, so I need to regain my independence by going to places alone and I’m starting locally, even if “local” is in a foreign country. Even if it means taking baby steps. Even it if it means doing something as silly as walking into an Italian bar alone.