Never in a million years did I imagine ever stepping foot in Croatia. I know this is extremely ignorant of me, but I honestly had no idea where Croatia even was before we moved out here! (It’s sandwiched between Slovenia and Bosnia and Herzegovina, and the boarder is a whopping two and a half hours from our house.) After discovering how close the country is to us we knew we had to go there sometime. 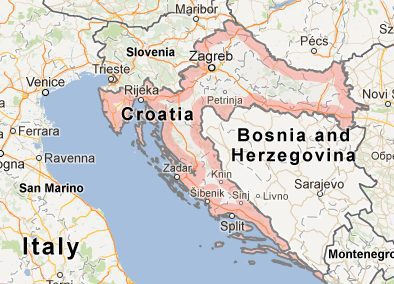 When I made our “Wanderlust” list I was awestruck by a place called Plitvice Lakes National Park (inspired by this pin, of all things). Plitvice (pronounced roughly like: pleet-vee-say) is Croatia’s largest national park with more than a dozen large lakes, rivers, streams, and creeks all interconnected. And depending on the time of day, amount of sunlight, and how many minerals and organisms are present, the color of the water can change drastically. One minute it’s a stunning turquoise and the next it’s a deep blue or stealthy gray. We couldn’t wait to see this place in person, so we made the five-hour drive to Plitvice. (It’s 2.5 hours to the boarder and then another 2.5 to the park—Plitvice is very close to the boarder of Bosnia and Herzegovina, but we didn’t venture there this time.)

We arrived at our hotel on Friday evening/afternoon after almost getting lost. Someone (*ahem* it wasn’t me) forgot to update the maps on our GPS, but luckily someone (*ahem* me) printed out directions just in case something happened. Getting stuck and lost in a foreign country was not something I was willing to chance. Our B&B for the weekend, House Marija, was just what we needed: a clean, safe place to sleep just minutes from the park entrance. We were welcomed with a great view and a delicious treat of juice and homemade crepes filled with a delicious fruit jam!

On Saturday morning we ventured out to the park. A one-day ticket during peak season was 110 Kuna per person (about $18) and included access to the entire park and their transportation (a train and boat) to and from different areas of the park. One cool thing is that there’s a place to exchange your money as you buy your tickets, which made things very convenient.

Before we left Italy I kept an eye on the weather like a hawk. The forecast kept calling for showers the entire weekend, which left me devestated; I willed Mother Nature to change her mind. I was so disappointed that we were going to this supposedly gorgeous place, but that it would look nothing like the stunning photos I’ve seen. It turns out that the showers stayed mostly at bay and the imperfect weather turned out to be a blessing in disguise. The park was almost completely empty, so it felt like we had the entire thing to ourselves. And even though taking photos was more than challenging (I had a plastic bag over my camera and my husband stood over me with an umbrella), I’m thankful the weather let us experience Plitvice in a way most may never see it.

The only way to describe Plitvice is by saying I felt like we entered a place where Jurassic Park met a jungle version of the Grand Canyon. It was majestic and overwhelming, and there was something beautiful around every bend. We had countless moments where we mumbled out loud about how breathtaking everything was. 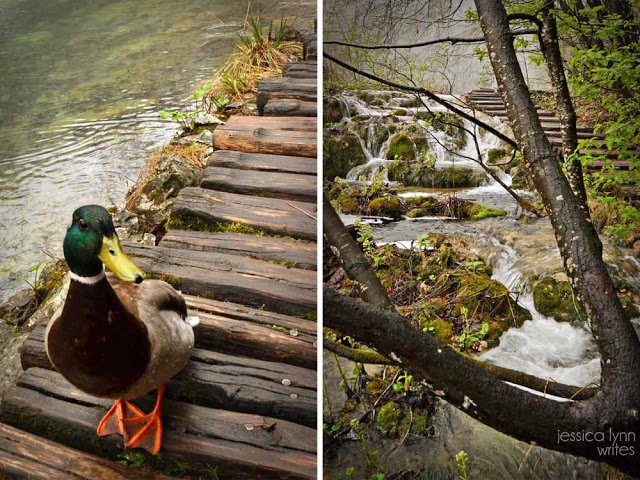 The park is set up to let you feel one with nature. With the exception of a few places, you won’t find guard rails or ropes restraining you. Foot bridges made out of narrow pieces of logs stand in as solid ground to help visitors from place to place—but be careful, because they’re very slippery when wet. Your only defense with not falling into water is by keeping one eye on the foot in front of you and the other on the scene surrounding you. 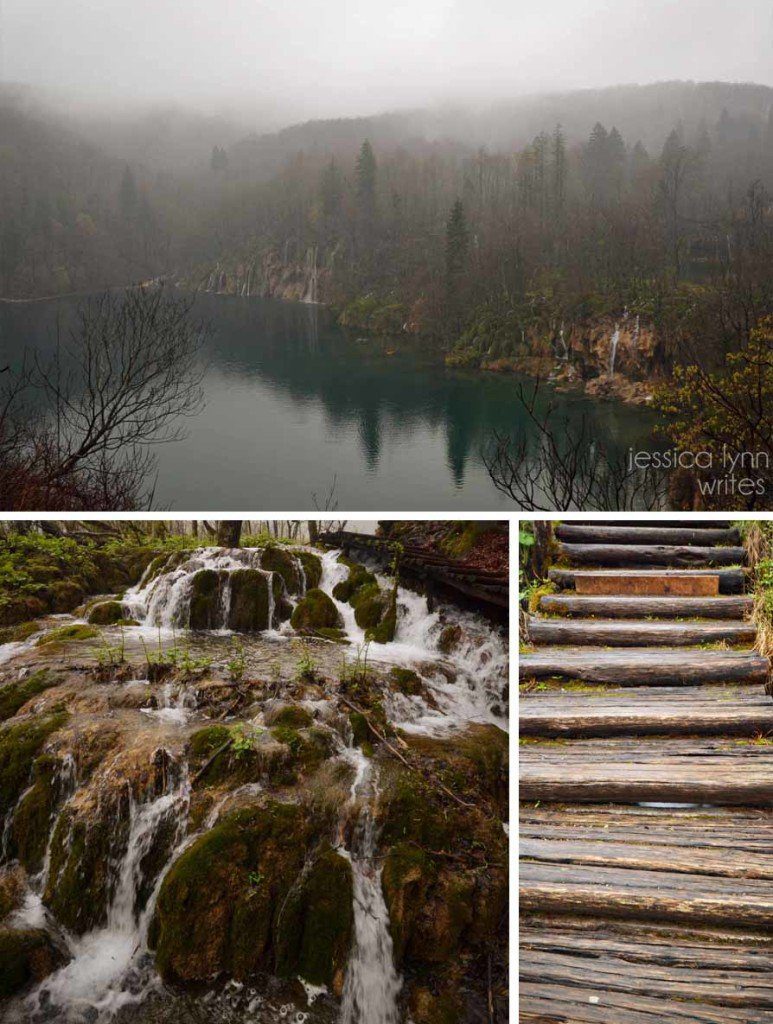 Every time I heard leaves, twigs, and dirt crunch beneath my feet I felt a jolt of energy. I soaked in the soothing sounds from the trickling streams and creeks surrounding us, and I gawked—mouth wide open—at gushing waterfalls above us. 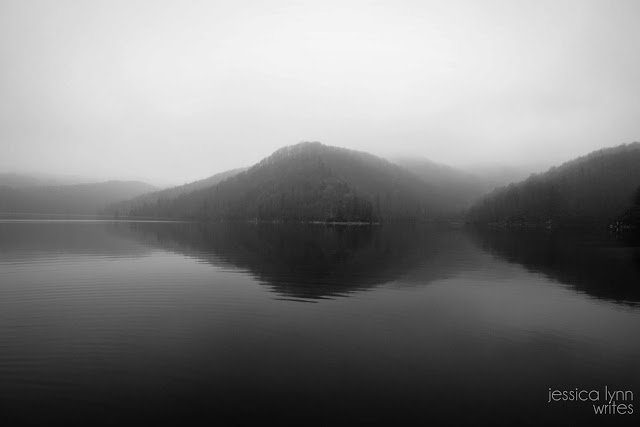 My favorite thing about Plitvice was how peaceful and exhilarating it was all at the same time. Walking around such a gorgeous area with minimal people around took my senses to a whole new level. I didn’t have to worry about running into someone or having people in my way. My husband and I walked in silence most of the time, taking time to enjoy our surroundings and fully embracing the experience. 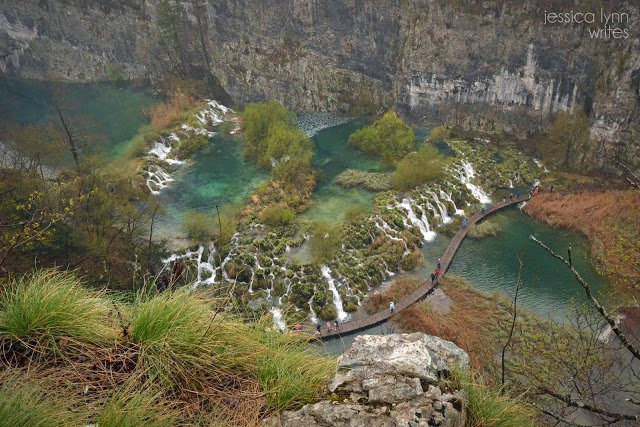 If you ever have the opportunity to visit Croatia I highly recommend spending a day at the lakes. I also suggest going in the off season (or the beginning/end of peak season) so you can experience the park without throngs of tourists! Plitvice is easily one of Europe’s best kept secrets. 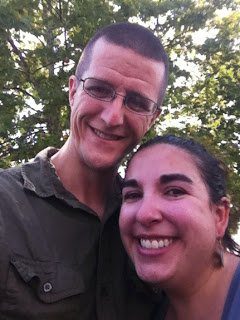 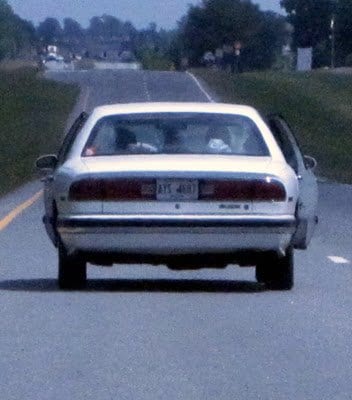 If you can look past the crappy, zoomed-in photo with the poor cropping job, which probably only decreased the look of the picture, you’ll see both the front driver and… 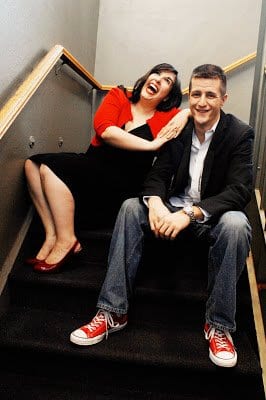 I’ve seen “Wordless Wednesdays” floating around the blogosphere, so since today’s Wednesday and I don’t have much to say, here are some photos in honor of the fact that four…

previous fridays 1. Personal Space Bubble Time! A hilarious game you like to play with Bella, only I don’t think she understands how to play. 2. You change the color…

I don’t know if you follow Ugly Betty, but if you do then you know three years ago, when the show first aired, she graduated from college and ventured out… 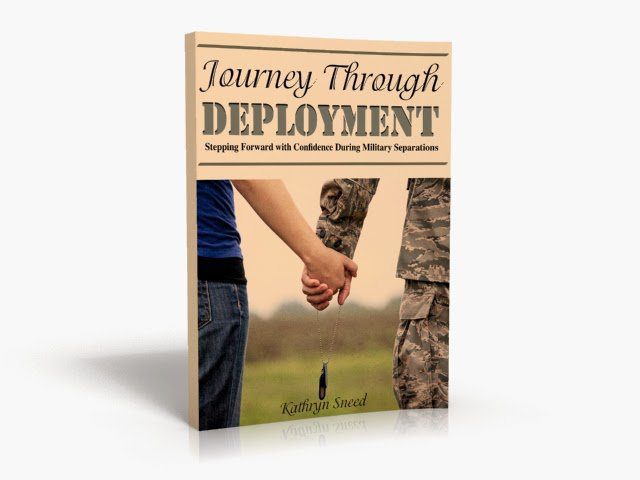 I remember the first time my husband (then boyfriend) told me he’d be deploying. We were long distance relationship at the time and I was at work. He told me…