Seven years ago I studied abroad in Bournemouth, England, and I made some amazing friends while I was there. One of my friends, Kat, even came out to visit us in America several years ago (oh, how I wish I blogged more back then!). Then, I met her and Dave three years ago in London when I went back for Katie and John’s wedding, and was on pins and needles waiting for him to propose to her! He finally did, and I was thrilled when they invited us to the wedding. 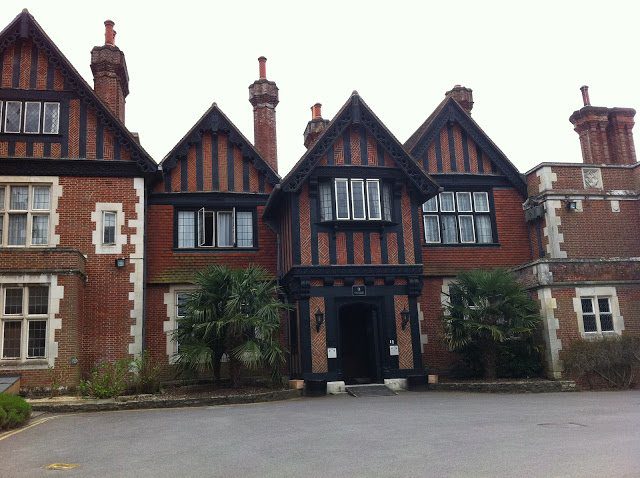 To make things simple, we stayed at the same hotel as the wedding, Macdonald Elmers Court Hotel and Resort, so we wouldn’t have to deal with transportation. And luckily, the hotel was steps away from the train station. I really wish we saw more of Lymington, but we were on time and budget constraints. The hotel was so pretty and so…British! 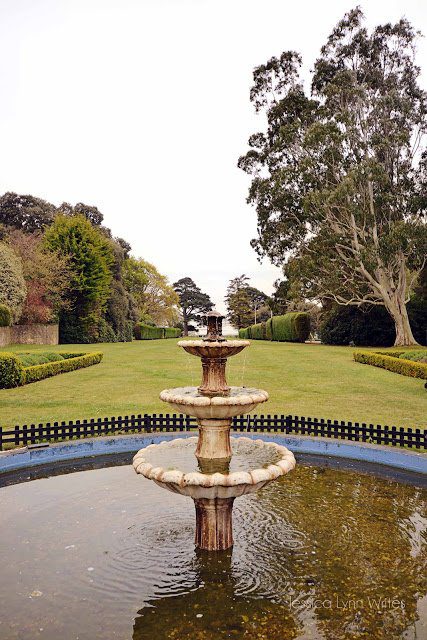 And speaking of Britain, the weather that day threatened to rain. That’s typical for the UK, but not so ideal for an outdoor wedding. The property has a beautiful courtyard, complete with a fountain overlooking a lush green lawn that continues down to the sea. It was so pretty! Luckily, in case of bad weather, the hotel had a back-up plan, but I’ll get to that later.

Since we stayed at the hotel we got to lounge around right up until the wedding. And by “lounge around” I mean take quintessential pictures pretending I was British. (All Brits take pictures of themselves drinking tea, right?) 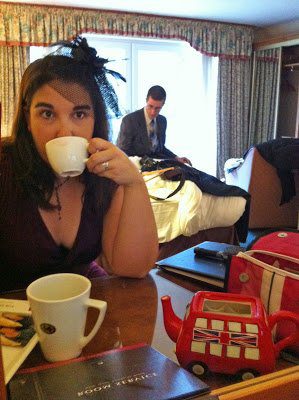 And now for a few somewhat closer pictures of the fascinator (aka “hat) I picked out the day before! I’ve always LOVED birdcage veils, and since I didn’t wear one at my wedding (I wore an even cooler veil!), I jumped at the chance to wear something similar to this wedding. 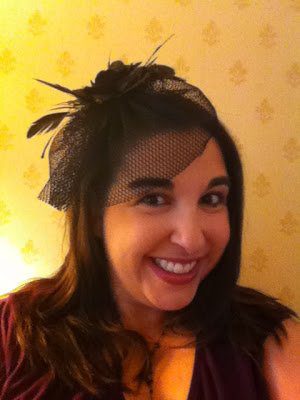 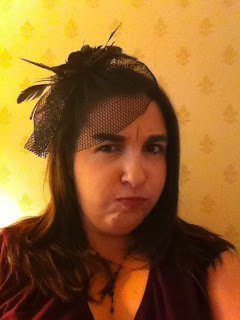 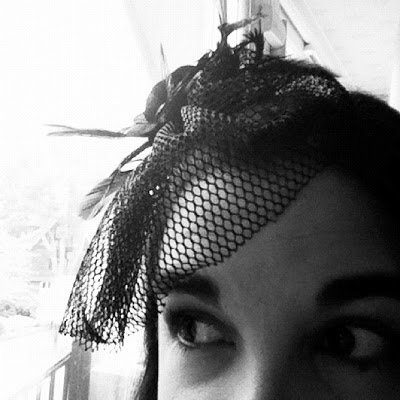 It was so much fun to wear! Not to mention, this one had feathers on it—hello, Kate Middleton! I just hope I’ll have another opportunity to wear it again sometime soon.

Like I mentioned earlier, the wedding was held just a hop, skip, and a jump away in the building next to our room. It was a small and intimate wedding and I was so honored to be there. I don’t have a great picture of Kat walking down the aisle, probably because I was literally speechless.

She was easily one of the most beautiful brides I’ve ever seen and I was caught off guard. I mean, just look at the back of this dress: 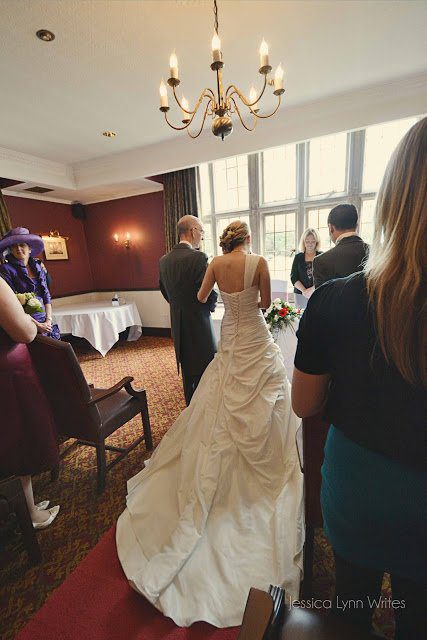 And that’s just the back! She reminded me of wedding-day Barbie. I wish I was kidding. (Oh, check out the mom of the bride on the left in the purple. She had an epic hat! I tried to take a picture several times, but none of them came out good. You should’ve seen that hat box for it—it was HUGE!)

Several weeks before the wedding, Kat and Dave asked if I wouldn’t mind doing a reading on their big day. Of course, I happily obliged! 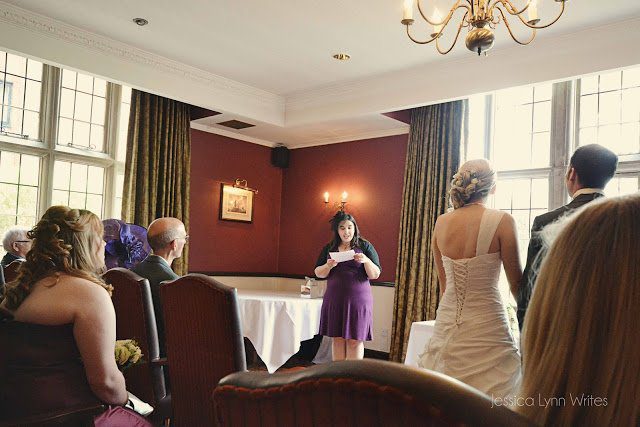 Truth be told, I get self conscious about my American accent when I’m in Britain, so I was a little extra nervous, but I think I did okay.

The ceremony was pretty quick, but one thing they did (I think it’s normal at a British wedding?) was allow guests to take pictures as they signed the marriage license. I know we can take photos whenever we want, but people got up and out of their seats for pictures! I got a kick out of how all the cameras. And then I decided to get a picture of the happy couple, too! 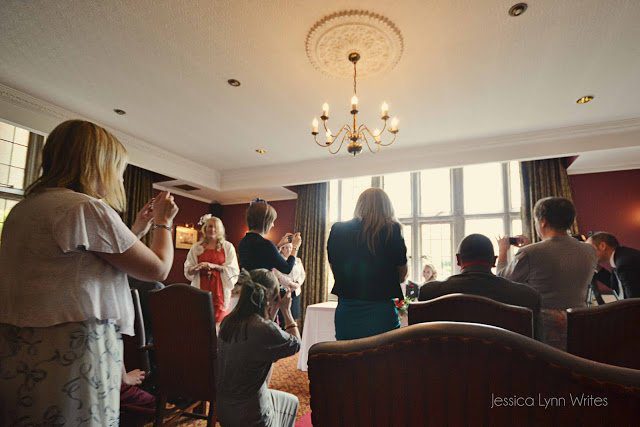 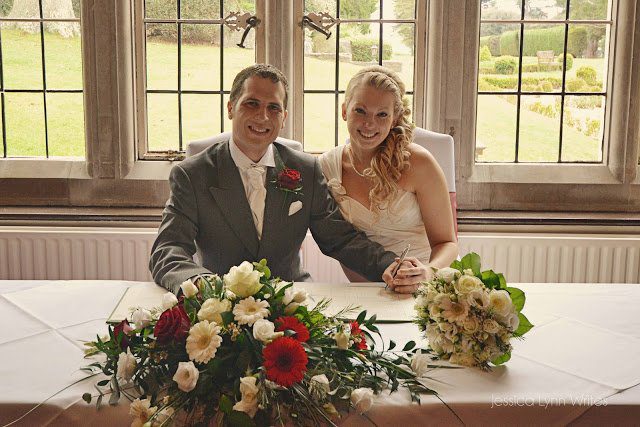 Before I knew it, the ceremony was over! Here’s a picture of the dashing bride and groom on their way out to the courtyard: 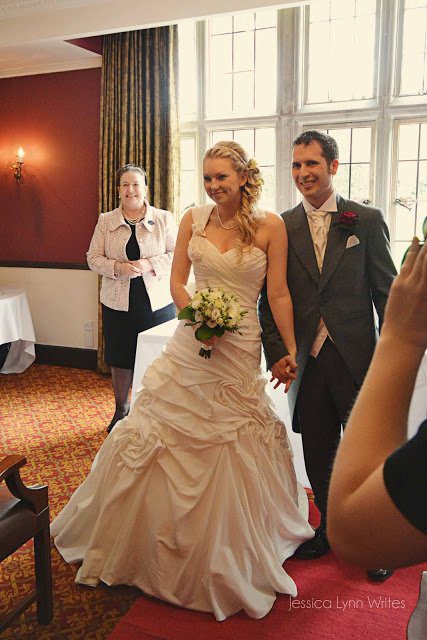 After the ceremony we moved outside to the courtyard for a cocktail hour. It ended up not raining, but it was better to be safe than sorry. 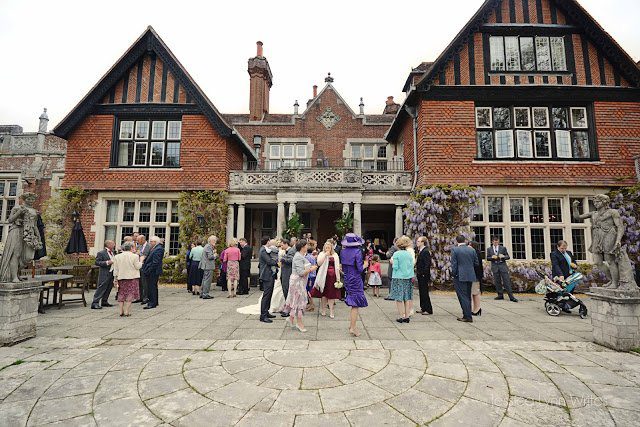 I don’t know why I always forget to take pictures of my friends. Friends, if I’m with you and one of us has a camera let’s take our picture together, please!!! I’m really sad I don’t have a good picture with my friends Chrissy and Katie. Although, I do have a good picture of me and the husband! 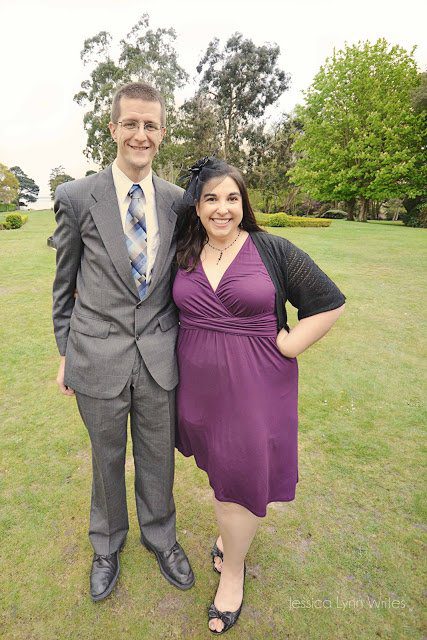 The wedding party took advantage of the pretty surroundings as the guests continued to mingle. 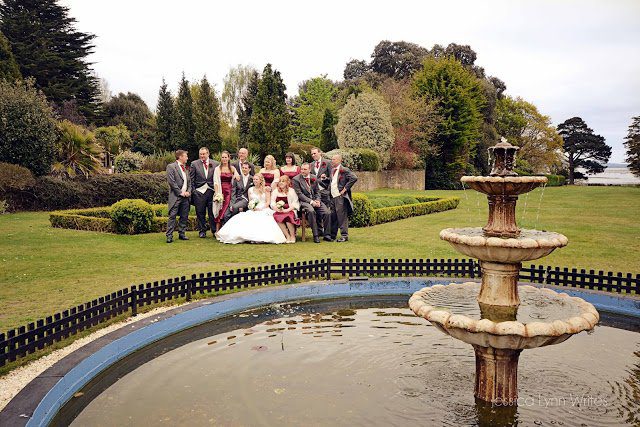 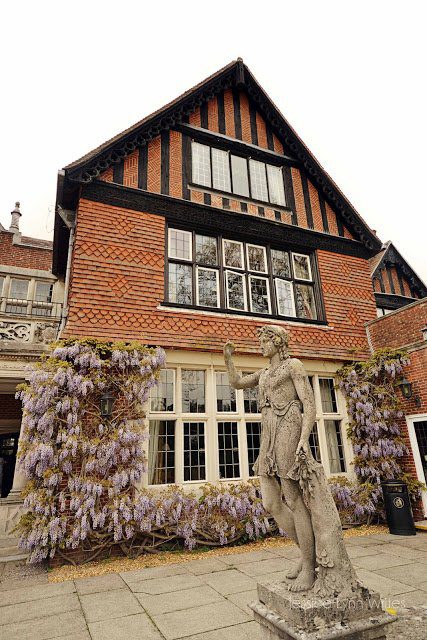 Another one of my husband, because I think he’s pretty darn handsome and I seriously miss his face. 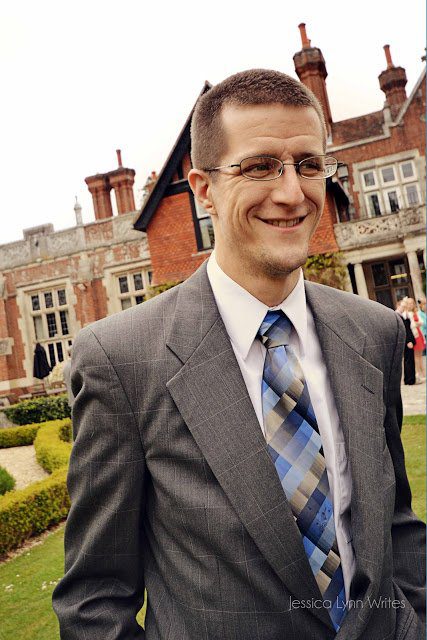 A little while later, we moved inside for dinner. A funny thing happened when we went back in. Not funny ha-ha, but weird. I came down with a crazy case of allergies. I couldn’t stop sneezing, my eyes were burning and very watery, and I just felt crummy. It was like a cold hit me within seconds and I was immediately sick. I don’t know what I was allergic to, but halfway through dinner I went back to the room and tried to rest a little bit. 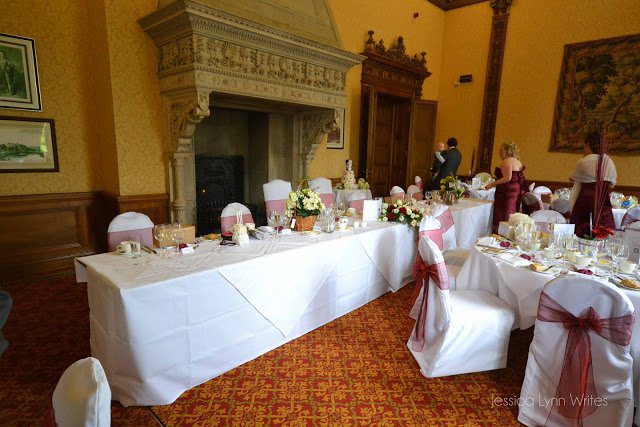 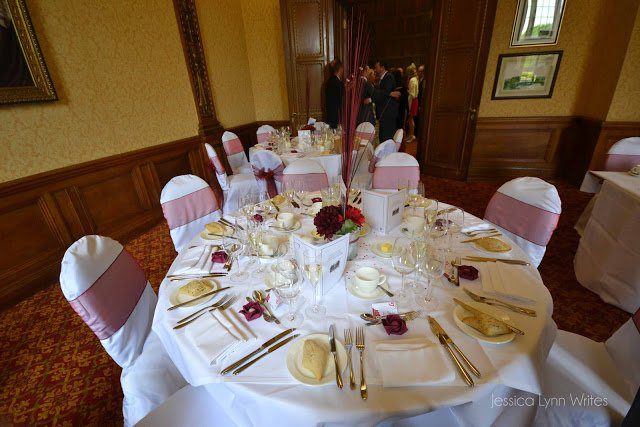 I made it back around the cake-cutting time (my husband
took those pictures, because he knew I’d want a photo of that moment)
and I managed to make it through the rest of the evening, but it was
rough. 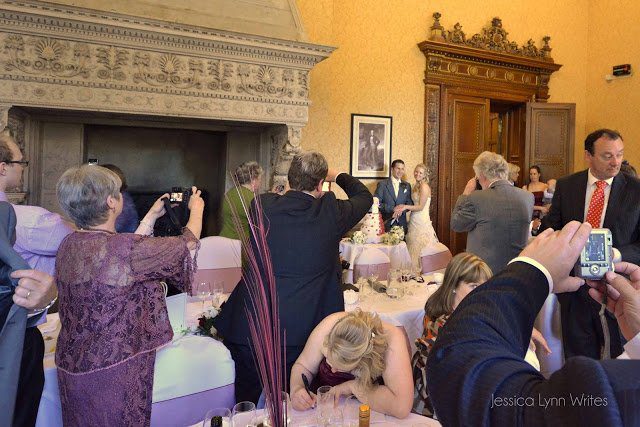 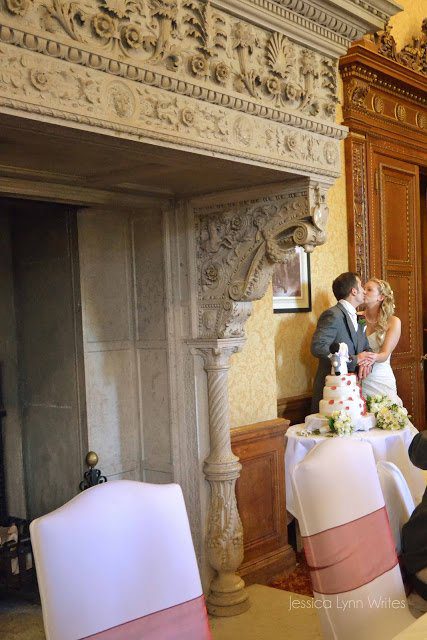 I have no idea what came over me, but I’m still mad about it. I only see these friends once every few years and I missed out on more quality time with them.

The rest of the evening was a lot of fun. I danced with my friends until I couldn’t keep my eyes open any more (which, admittedly, was a lot earlier than I planned because of the allergies…or whatever it was).

I’m so thankful for picking Bournemouth as my study abroad choice seven years ago. I love the friends I made and I just think it’s so cool that we still get together! Thank you, Kat and Dave, for letting us be part of your special day!