I meant to share this project/care package with you throughout the month of December, but I ran into a little snafu, as you’ll see below. I was going to throw in the towel on this post all together, but figured sharing it a little late was better than nothing!

I had this care package idea wedged in the back of my mind for a several years. I saw a blog post with something similar (this was before Pinterest, and I don’t have it bookmarked anymore), and then I combined it with another idea (from Pinterest).

Putting the whole thing together took weeks. I started culling all the materials and gifts back in October so I could mail it out around the middle of November. The result was something amazing. It was so amazing that I took tons of photos showing all the different steps I took to put it together. And then I did something extremely crazy and stupid. I deleted them allllllll off my camera without triple checking (like I usually do) that they were on my computer first. I literally cried when I discovered what I did. Hello, pregnancy brain.

The gist of the package was that I wanted my husband to have something to open every day of December, all the way up to Christmas day. Two years ago he didn’t have a single thing to open on Christmas and it broke my heart. I know Christmas isn’t about the stuff, but when you don’t have any family around, the stuff can be pretty darn uplifting and nice. He also didn’t have any decorations, so I knew I wanted that to change this year, too. 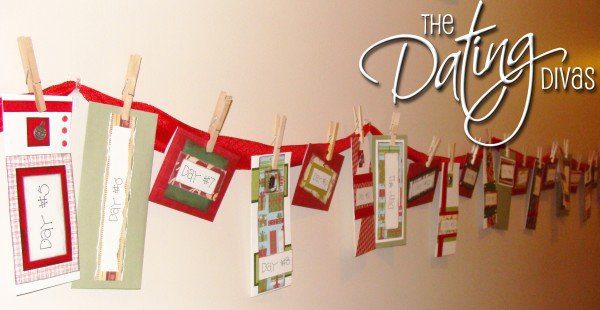 I loved this idea from The Dating Divas and took it one step further. This woman wrote out 25 cards and on each on card she either wrote: A compliment (something she loved about him) a service (something she’d do for him) or a fun Christmas activity. Their project is fantastic on it’s own, but I wanted him to have physical gifts to open—15 gifts, to be exact!

In his box I sent a long piece of red ribbon, 24 clothespins (that’s my bad…thought the pack had 25, whoops), the 15 presents all wrapped up, and 26 envelopes for him to open. The extra envelope explained what was going on and had directions for him: Put all the envelopes on the ribbon, only open one envelope a day, and follow the directions on each paper.

I took pictures of all the envelopes and what I wrote on them, along with photos of all the gifts in case you want to do this so you can have some ideas, but since those photos are long gone, here’s the written version with what I can remember: (I was much more elaborate and fun with how I worded it—below is just the super short CliffsNotes version.)

Were these the things I’d give him if he was home for Christmas? Probably not. But I knew whatever I sent, he’d have to mail or bring back with him, so I didn’t want to go too crazy, which is why a lot of it was candy or little toys. Keep in mind that I was also limited with where I could shop in person. I bought most of these things on base and the rest from ThinkGeek.

I had a lot of fun shopping and figuring out what to write on each paper, and I really hope he had fun opening something every day. He said he loved everything I sent and had fun with the whole thing. Mission accomplished!

Have you ever sent out an elaborate care package or present like this before? On a different note, have you ever accidentally deleted all the photos off your camera? (I’m still clearly very sad and bitter about my mistake.)