Skip to content
***As of 11 am today there is absolutely no sign that this little girl has any plans on coming out to greet us anytime soon. That makes me four days overdue—I apparently have an extremely comfy womb and she’s just taking her dear sweet time. We have an induction scheduled for Friday at 6:30 am if she doesn’t make her appearance before then. And before you suggest something that may trigger labor, trust me, we’re doing everything under the sun to help get this party started! In the meantime, we’re doing our best to be patient and wait for her.***

You know what’s pretty fantastic? Having a group of women you love and who love you back, throw a party for the new little life you’re creating. That, my friends, is fantastic! When I was home this past December my sister-in-law, mom, and mother-in-law threw little Pickles her very first party! (I need to mention that my brother helped out just as much as these fine ladies did, but since baby showers—or this one at least—is primarily for the gals, I didn’t want to include him in that line up, so he gets his very own shout-out right here. Also, a HUGE thanks to Amanda, my sister-in-law for taking the pictures!!) 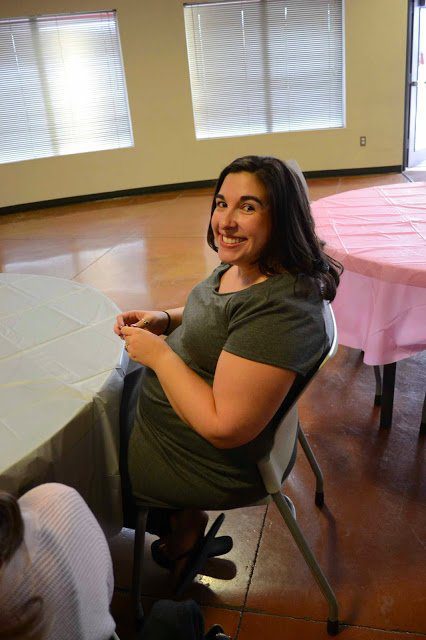 I had no idea what to expect from this shower since they kept everything a secret, but I absolutely loved it! It all started with this adorable invite my brother created: 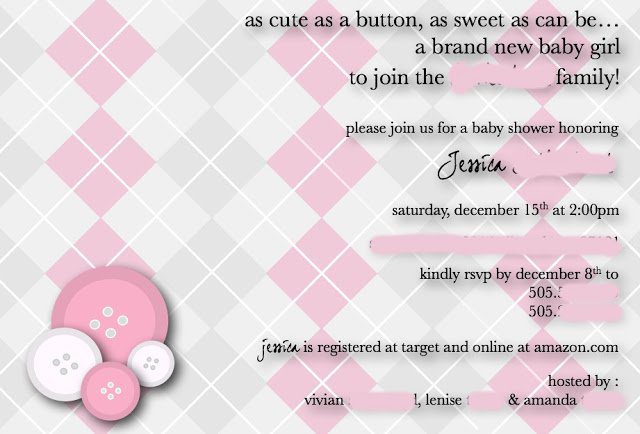 I actually don’t think that’s the final version, but it gives you a pretty good idea of what it looked like. Little did I know that they’d take the pink and gray scheme and button theme and run with it! They’re so clever! I’ve been smitten with pink and gray ever since I knew we were having a girl. It’s so soft and feminine.

The tables either had baby pink or gray tablecloths with pink carnations in mason jars, then they alternated with shades of gray (ha!) and pink buttons around the flowers. It was adorable.

The carnations totally took me back to my wedding (we had carnations as centerpieces and in my bridesmaids bouquets). (Interesting fact: in Italy, carnations are considered funeral flowers…how depressing, especially because I genuinely like them!) Another thing that took me back three years ago? One of our flower girls (in the photo below) came to the shower; it’s amazing to see how much she’s grown!

The rest of the decor was just as great. My sister-in-law got super long sheets of fabric (pink and gray again) and hung them up as a backdrop. She also made giant pom-poms out of tissue paper and hung them up everywhere. I so wish I could’ve brought them home with me to put in the baby’s room. 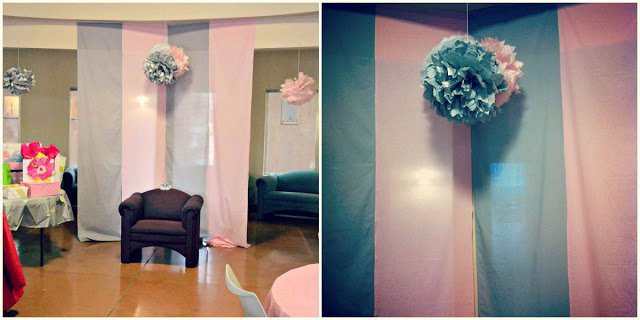 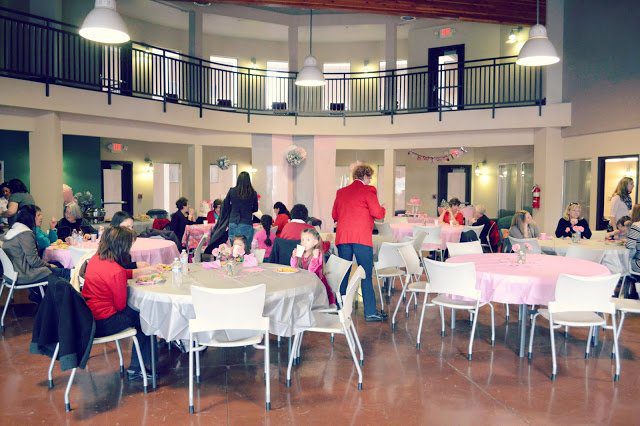 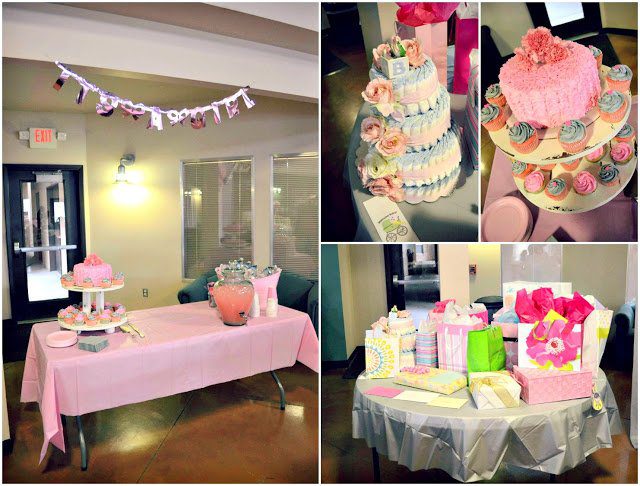 When the guests entered there was a family-tree guest page for them to sign. I pinned this awhile back and Amanda remembered seeing it, so my brother created one! I love it and plan on framing it to go up in her room when/if we move back to the states (I didn’t have room to bring it back with me and the walls here frustrate me too much to hang things on them). The guests all put their thumbprint in either pink or gray ink and then made “leaves” to sign their name. 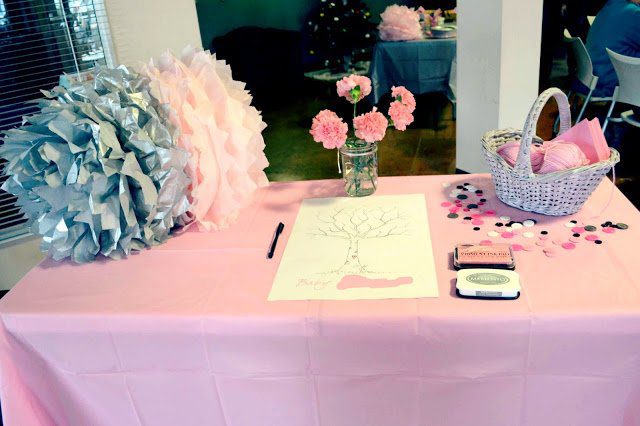 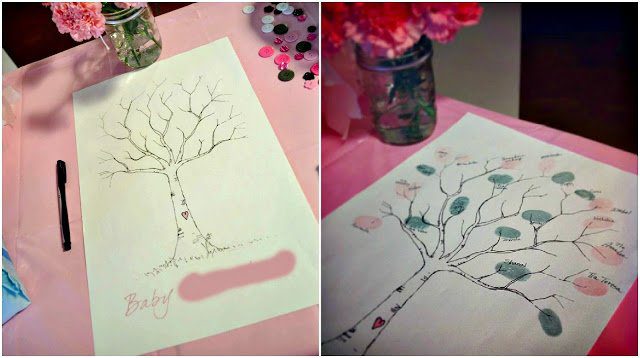 They went with the “baby” theme and got mini versions some of classics: small croissant sandwiches with deli meats, mini quiches, tiny pigs in a blanket (I had like 100 of them), fruit salad (cut up small…so that counts as “baby,” right?!), chips, salsa, and green chile dip (nothing “baby” about them, but that’s a staple at any New Mexican party), and one of my favorites: tater tots on toothpicks. 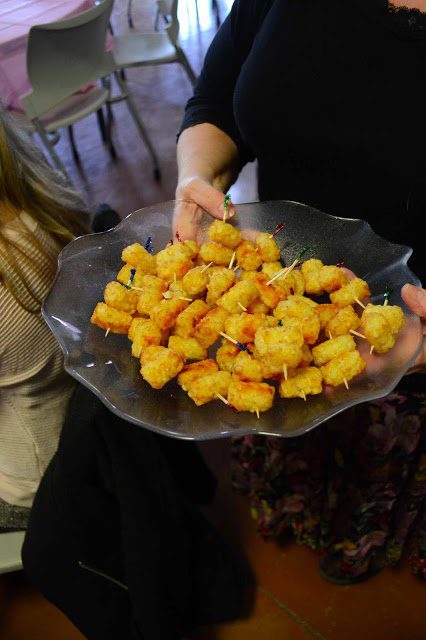 A few weeks before the party, my mom and I went to a bowling event when she was out here and they had tater tots on toothpicks. I’m pretty sure I ate at least a two dozen of them. My second-trimester self just couldn’t stop popping them in my mouth, so my mom made sure they were at the baby shower!

Since we’re on the topic of eating, let’s talk about the cake! You guys, I still dream about this cake; it was that good. (I wish I was kidding, but just writing this is making me drool a little.) Knowing I have a thing for funfetti AND cupcakes, Amanda made strawberry funfetti cupcakes as well as a seriously scrumptious and super girly cake. Pre-pregnant me would’ve had a bite or two of the cake and been done with it, but since I’ve had a wicked sweet tooth this time around, let’s just say that I indulged in a lot of the cake. 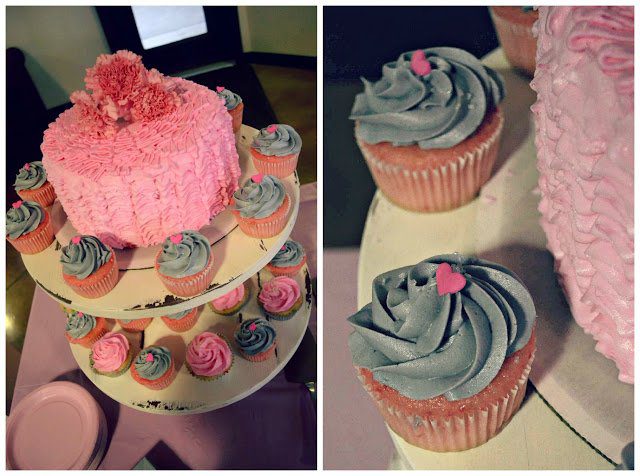 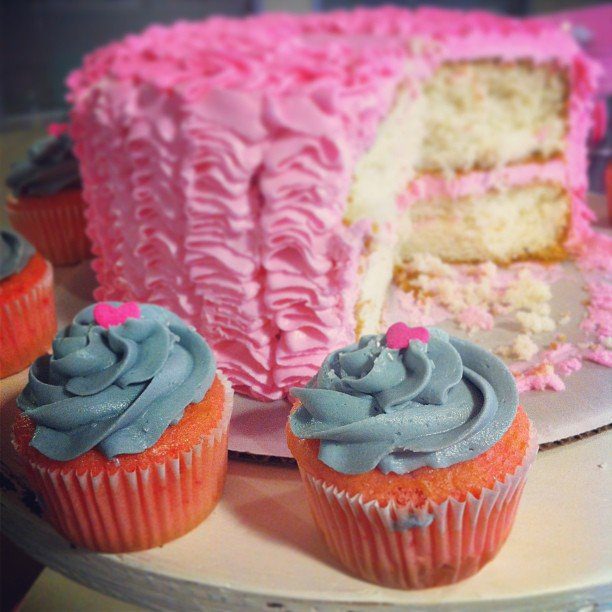 Also on the subject of cake, I got a pretty sweet diaper cake! I’ve always seen these at showers and secretly hoped I’d have one at mine. As luck would have it, my mother-in-law had a gorgeous cake sitting there for me! 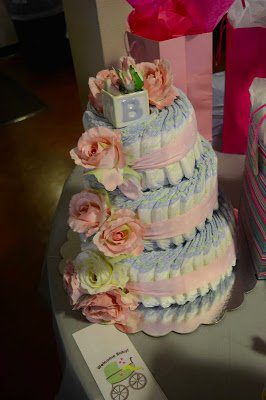 After we filled up on sweets it was time for some games! I know a lot of people think baby shower games are stupid, but I love them. There were three games at this shower: the belly/string game, the purse game (looove this one!), and a new one I’ve never heard of called How Sweet It Is.

In How Sweet It Is you have to pair up pregnancy words with the candy that matches it. For example:

Twins = Twix
Triplets = 3 Musketeers
Conception = Skor
Breast feeding = Milky Way
and so on and so on. There were some pretty hard ones!

After the games it was time for little Pickles to open her presents (I helped). Since I was only home for a short time and only had a suitcase with me, the invitation specifically requested that gifts at the party be small or mailed to Italy. I know that may sound tacky, but the majority of the guests were very close family and friends, so we felt comfortable with the decision to include it with the invitation. While I would’ve loved to open the pink baby bath tub and bumbo at the shower, I was extremely grateful when it arrived in Italy via mail. 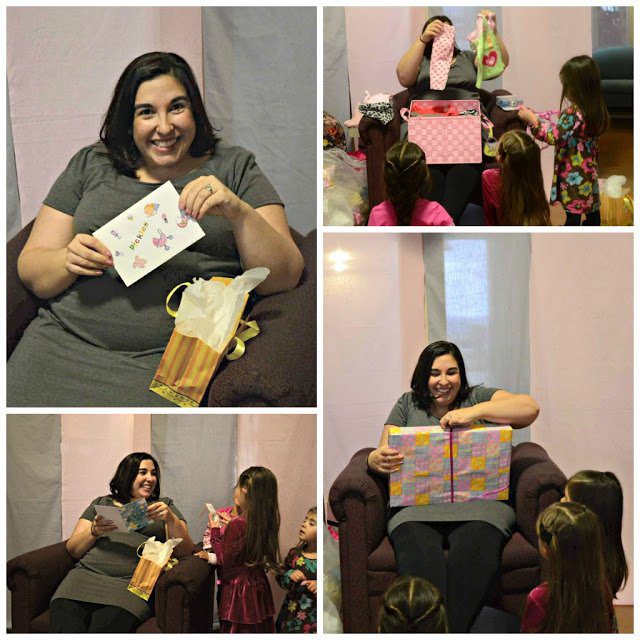 The gifts I received were SO much fun. There were a lot of ridiculously cute outfits, itsy bitsy socks, teeny tiny shoes, stuffed animals, and gift cards so we can purchase what we need and have it sent out here.

One of my favorite aspects of the shower were the blankets my little girl now has. Each grandma (her great-grandmas) gifted her with a handmade blanket or quilt. 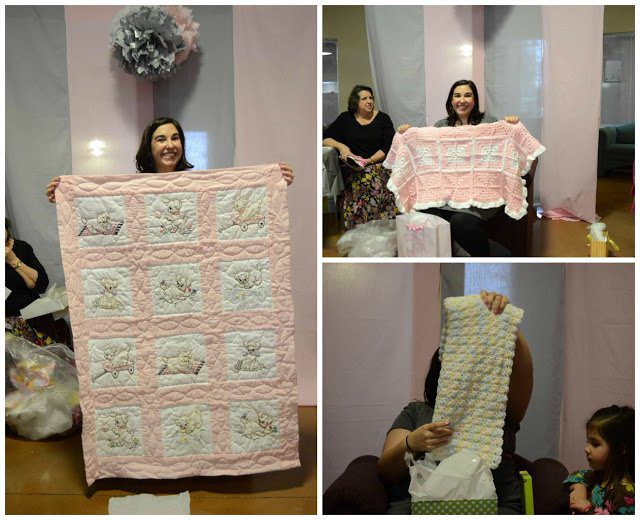 I still have the quilt my grandma made me (it’s now draped over her
crib), so I know Pickles will cherish these as well. Plus, how wonderful
is it that they made them? Such incredible talent!

One of the best parts of the shower was being surrounded by everyone. Living so far away makes me miss them all so much; it hurts to know that they won’t get to meet the baby until she’s much older, but I’m thankful there are so many people already in her life anxious to meet her. There were aunts, cousins, second-cousins, grandmas, in-laws, and old friends. It was fantastic. 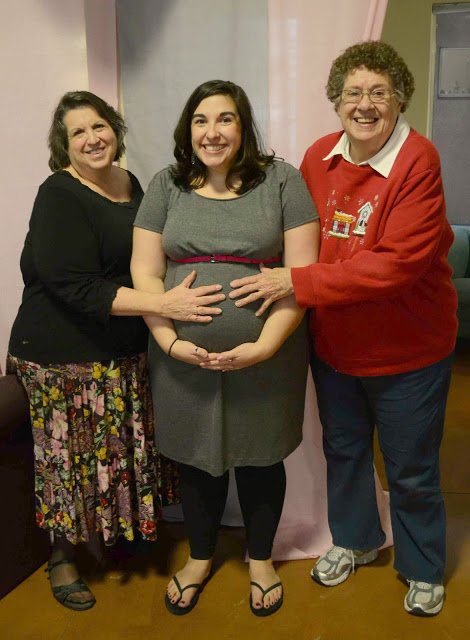 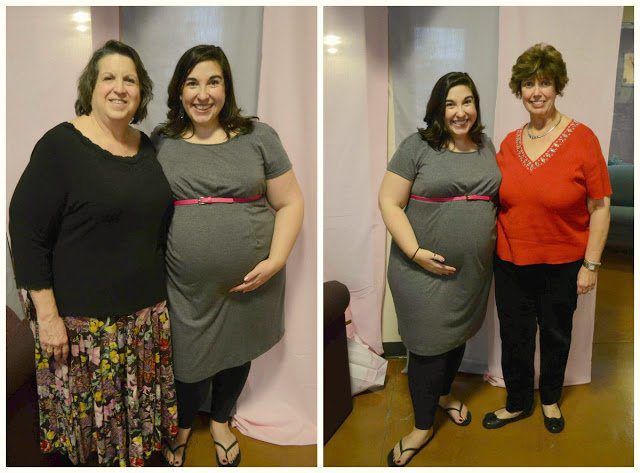 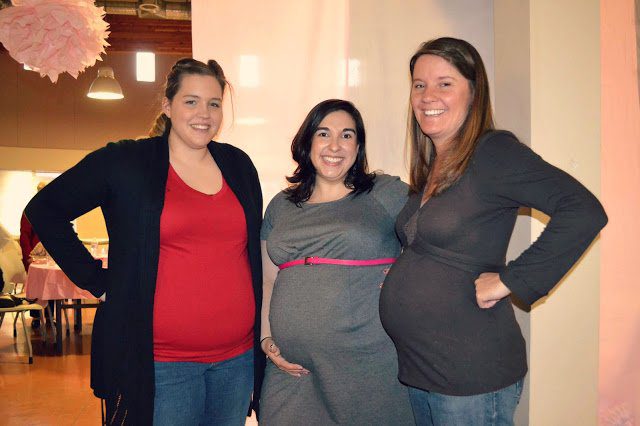 Another cool thing? Little Pickles will have cousins just three months behind her! My sister-in-law and cousin are both pregnant and due within days of each other!!

Looking back on my baby shower makes me realized how truly blessed we are. It was fantastic and I appreciate all the hard work that went into it! 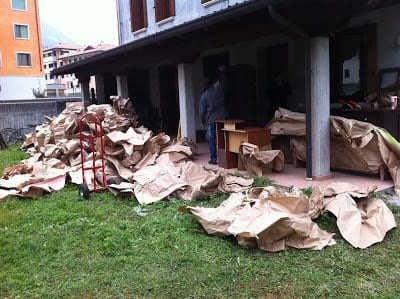 What good is taking a picture if I just hoard it on my computer? Here are a few I’ve taken over the past week from my iPhone. You may have…

previous fridays 1. You were just as excited about our night away in Atlanta as I was. 2. You bought me a gift (Photoshop!!) for no reason *insert happy dance…

I’ve noticed a lot of new readers recently (Hello!!), so I wanted to explain Five for Friday in case you’re wondering what the heck this is—it’s not your normal blog… 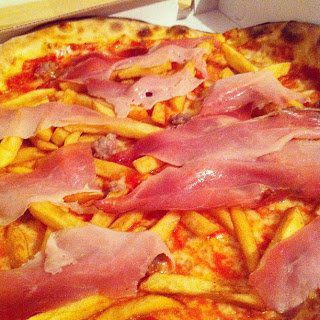 Back home I would never dream of eating an entire pizza. Maybe a “personal pan” or one of the giant slices from Costco, but otherwise I usually keep it to…

previous fridays 1. We have conversations via Stumble 2. HUGS! 3. I had another migraine and you went above and beyond the call of husbandry by taking care of me…. 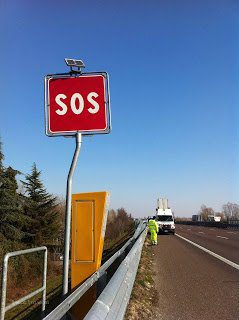