Skip to content
My parents came out to visit for three weeks! Catch up on our adventure:
Driving through Austria and a Meal in Mittenwald
Harvesting Grapes with the Parents
An Italian Market and Unexpected Detours
Dachau Concentration Camp
McDonald’s in Munich
The Sound of Music Tour in Austria

A few days before our cruise set sail, while we were in Austria, my mom double checked the confirmation for the next leg of our trip. “Hmmm…that’s interesting,” she said. “It says we’ve been upgraded.” Say whaaaat?! Armed with that info, we were anxious to get home and compare what the computer said next to the info my mom had for the cruise.

My parents originally booked us a nice balcony room (junior suite) on Royal Caribbean’s Splendor of the Seas ship. (If you’re going to cruise I HIGHLY recommend spending a little more money and booking a balcony room—it’s essential on a cruise, in my opinion.) The plan was that I’d sleep on the pull-out couch and they’d take the room. So when we got home and saw what room we were randomly upgraded to, we were floored. Seriously, my jaw is still dropped from our digs that week. They put us in the Royal Family Suite aka the (second) best room on the ship! (The first was the royal suite, and I’m pretty sure you had to be part of the royal family to stay there. Kidding. Kinda.)

We were greeted with fresh fruit when we walked in and saw a huge (by cruise standards) living room area. That room had two chairs, a coffee table, and couch (with a pull-out bed. It also had a TV, iPad, mini fridge, and access to the private balcony where a table and two chairs awaited us. 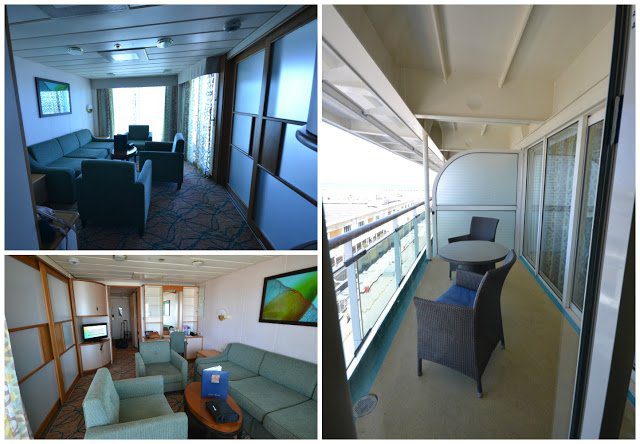 Our suite had not one, but two bedrooms. The “master” bedroom had another TV and a queen-sized bed and had a bathroom with a bathtub attached to it. A bathtub on a cruise ship!! The other room technically had three beds—two twins and a hide-away bed that came down from the ceiling if you needed it. There was also another bathroom (not attached, but just outside the door to the bedroom), but it was just a standing-only shower. Seriously, those showers are teeny tiny; I used it for half of a shower and then went to the bathtub shower and never looked back. Pure shower-taking bliss on a cruise! 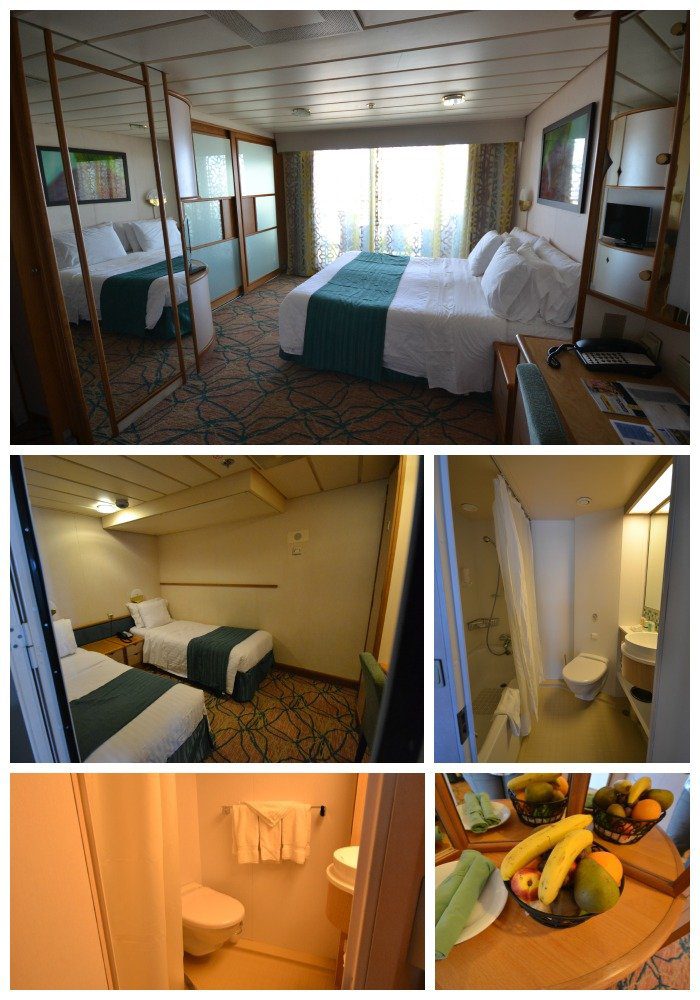 The room could sleep up to eight people and also came with daily fresh fruit, room service 24/7 (as opposed to a set time for room service), our own concierge, and several other amenities. It. Was. Beyond. Awesome.

So how did we get this fantastic room? We still don’t really know. My mom and dad are regular cruisers with Royal Caribbean and are part of their loyalty program, but when we asked about the upgrade RC said it was really just luck. Works for us!

There was one slight problem where luck was definitely not on our side: none of our keys worked…for the ENTIRE trip. Literally, any time one of us wanted to go into the room, we had to go to customer service (on a different floor) and have someone make us a new key or meet us at the room. Every. Single. Time. We ended up becoming very familiar with several of the employees who helped us out, and Royal Caribbean corporate became aware of the issue by the time we disembarked at the end of our trip. Still, it kind of took away from the relaxation aspect of a vacation.

That was really the only negative from our trip..well, except for when I slipped, fell, and had to visit the medical center on board for an X-ray, but more on that in another post!

We started our cruise in Venice, which is conveniently about an hour away from my house, so we drove and parked my car in a lot right next to the ship. Cruising out of the city was so much fun! I’ve been to Venice several times before, but I’ve never seen it like this. I soaked it all in…and took pictures as we sailed out to sea: 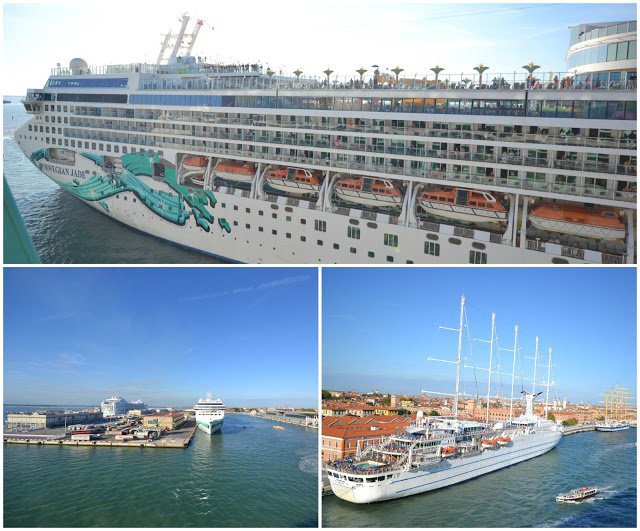 That was the boat (top pic) parked next to ours. As we left everyone on the ship waved to us and cheered! 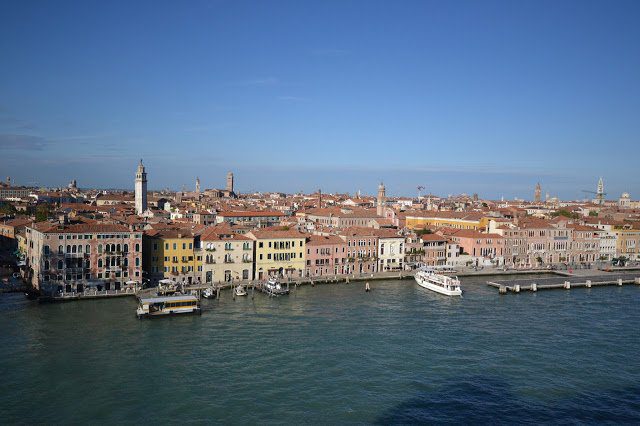 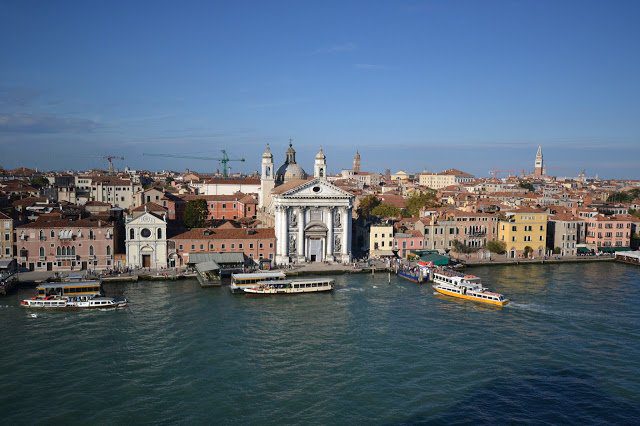 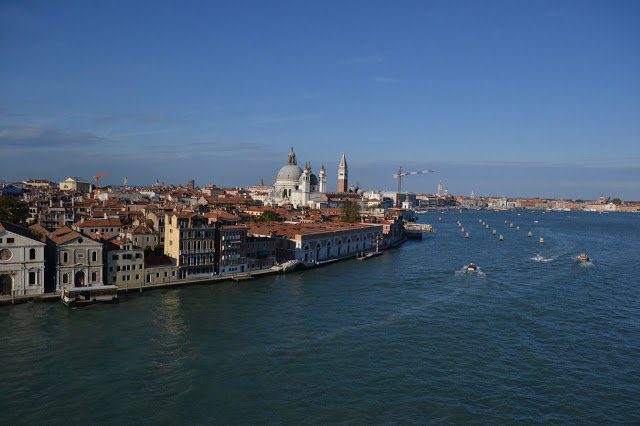 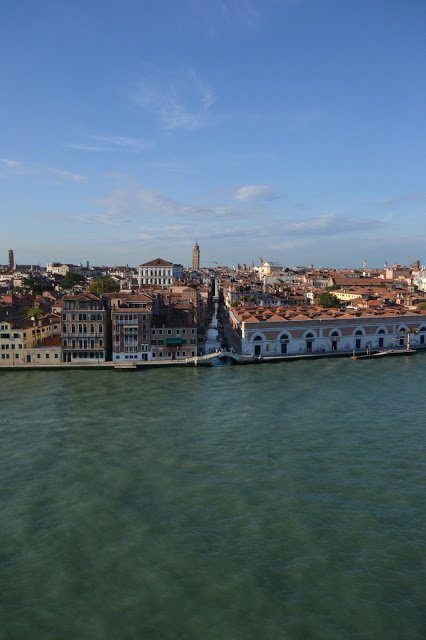 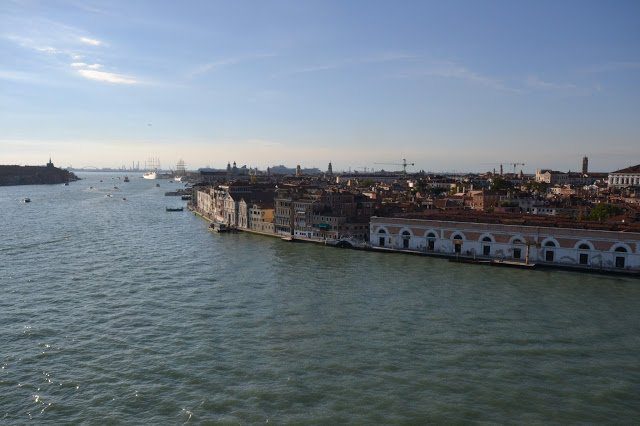 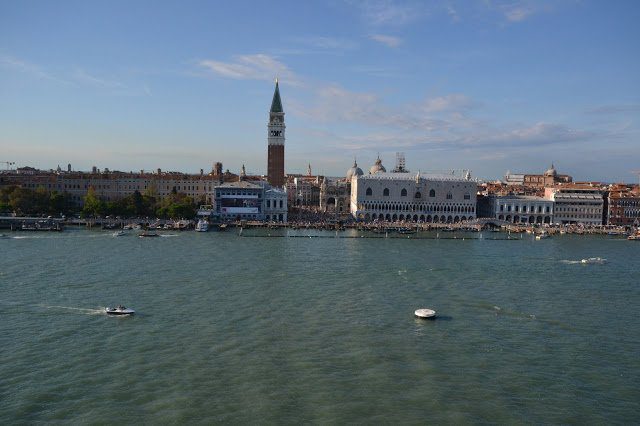 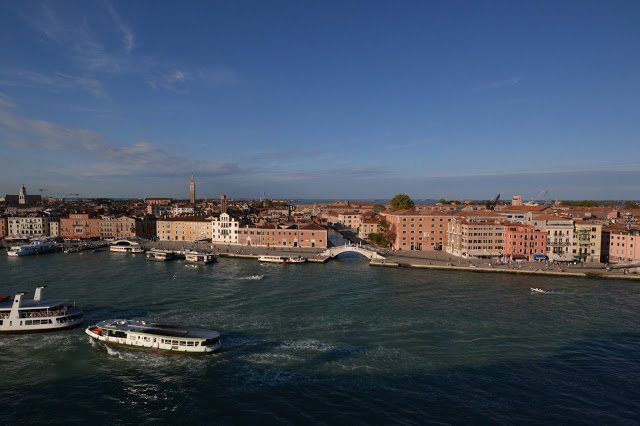 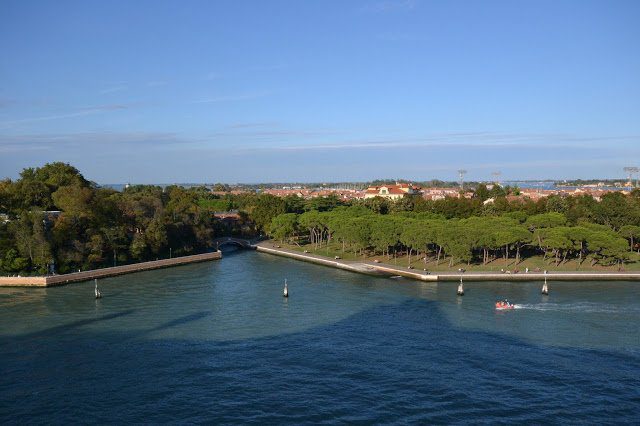 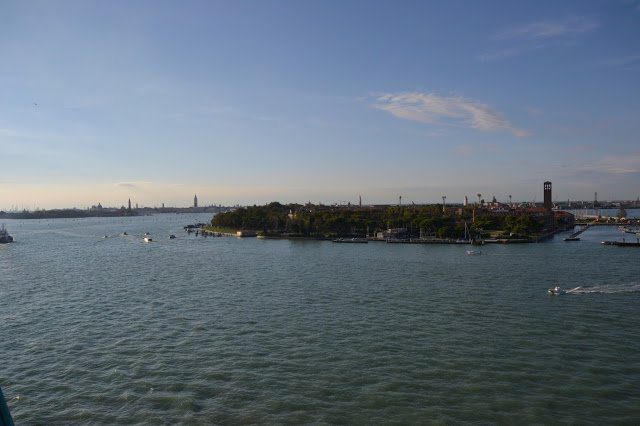 And then, with Venice behind us, we were off! 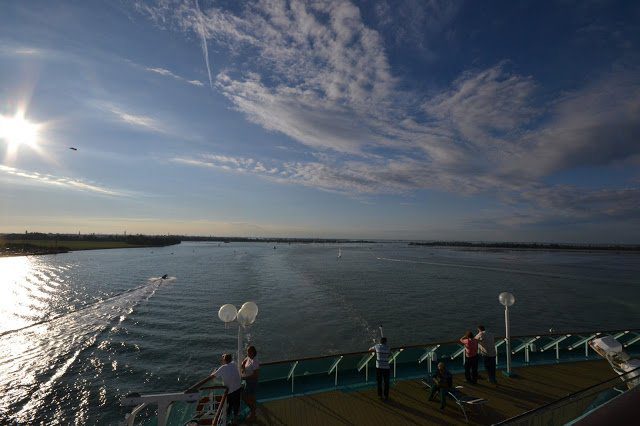 I hate that it’s taken me this long to recap our trip, but I’m determined to finish. Photos will most likely not be edited, but at least they’ll be somewhere besides taking up space on my computer! Here’s what’s coming up as far as cruise posts go:

Bari, Italy
Corfu, Greece
Santorini, Greece
Ephesus, Turkey
Buying a Rug in Turkey
Olympia, Greece
Our last day/night at sea
*linking up with Helene in Between