Skip to content
My parents came out to visit for three weeks! Catch up on our adventure:
Driving through Austria and a Meal in Mittenwald
Harvesting Grapes with the Parents
An Italian Market and Unexpected Detours
Dachau Concentration Camp
McDonald’s in Munich

After we had our share of American food, we hit the road and drove to Austria. It was POURING rain, which made driving in a different country interesting. I don’t mind the rain, but it was hard to distinguish what the signs meant since I don’t know a lick of the language. It took us a little longer to get to our hotel in Salzburg, but when we got there I was happy I booked with them. 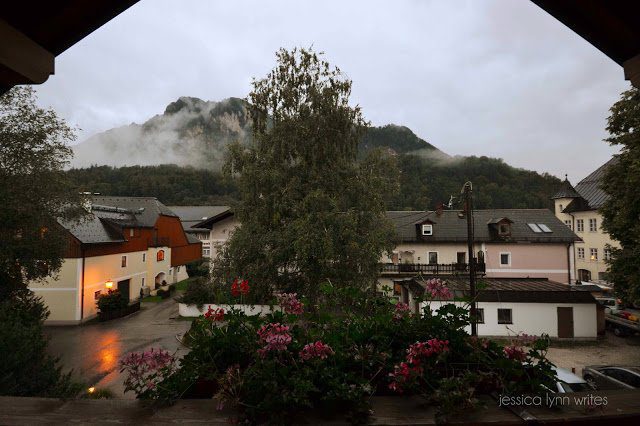 Picking a hotel in Europe isn’t as easy as getting a room at the HoJo or Marriott. You have to really dig and poke into the reviews to see exactly what you’re getting out of the place where you’re staying. Luckily, Hotel Sallerhof turned out to be fantastic and I highly recommend it if you’re staying in or around Salzburg. The room we had was the perfect size for the three of us, there was an elevator (huge plus), the breakfast was REALLY good, and we could book our Sound of Music tour with them!

Oh yes, The Sound of Music tour! It was one of the things my mom and I planned on doing once we found out how close we are to Austria. I grew up watching the SOM, so I couldn’t wait to go on the musical tour. When we checked in I told the receptionist we wanted to go on the tour the next day and he booked it for us. The best part was that the tour company picked us up from the hotel! (The only bad part is that they don’t take you back. You get a free public bus pass to get back.)

I looked into the different SOM bus tours offered in Salzburg before we arrived, but the one the hotel uses wasn’t on my list. I immediately went to TripAdvisor once we got to our room and looked them up, and that’s when my hopes got shut down. People didn’t have very good things to say about it, and it looked like it all depended on who your guide was. I started crossing my fingers our guide the next day would be good, since this was our only shot to take the tour.

The next day we woke up to pouring rain, which is a bummer to begin with when you’re going on a sightseeing tour. Hoping the rain wouldn’t ruin our tour, I kept those fingers crossed for a good guide…and then crossed my toes for extra good luck.

Luck was on our side! We stepped onto our bus and a very energetic woman decked out in rain garb greeted us. She told us that since it was raining we’d have to sing extra loud. All of my worries about the tour faded; I knew we were in for a fun day!

My mom was all smiles as we started on our way 🙂 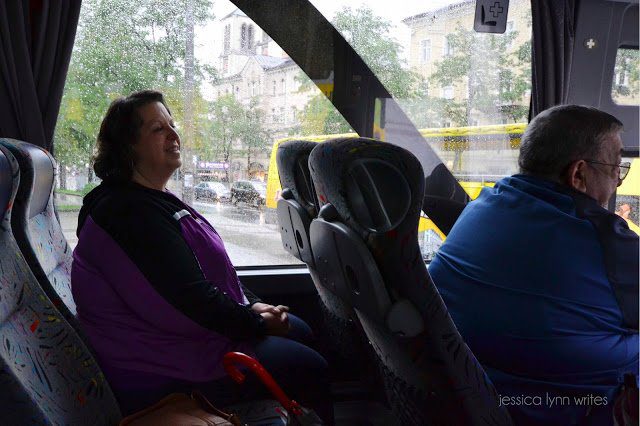 I wasn’t kidding about the rain, and I’m really glad we brought umbrellas with us. 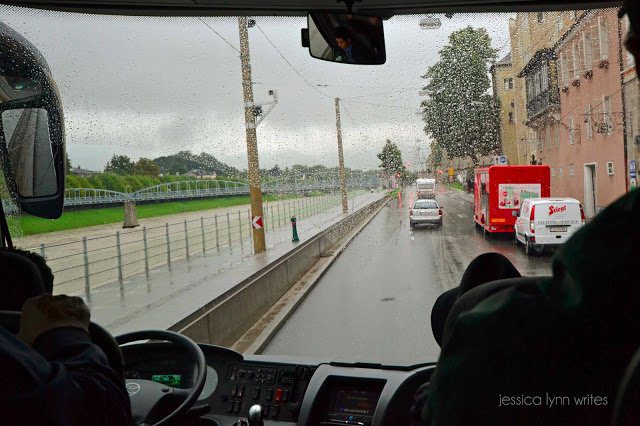 As we drove around, the guide pointed out different sites from the movie. Like that bridge up there? It’s the Mozart Bridge (Mozartsteg) and was used in the film when Maria sings “Do Re Mi”.

Next it was time to see one of the most iconic sites of the film, and the one I was most excited to see: The Gazebo! 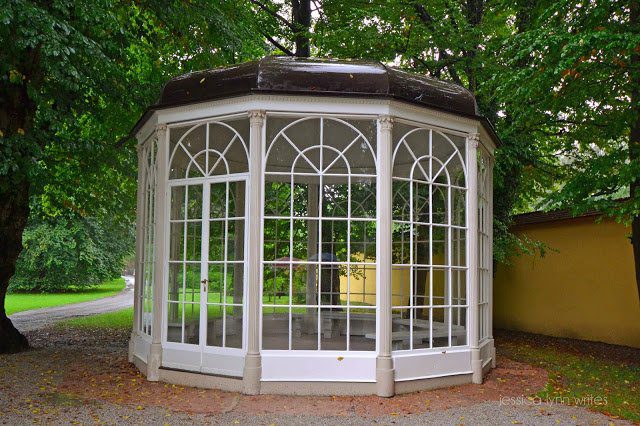 I used to love (okay, still do) watching this scene and I still wish I owned a dress like Liesl. It was so pink, soft, feminine, and it flowed and twirled just perfectly. I knew if I could just get my hands on a dress like that I’d have a moment like she had…in a gazebo…in the rain…with an older guy, singing about being carefree and in love. 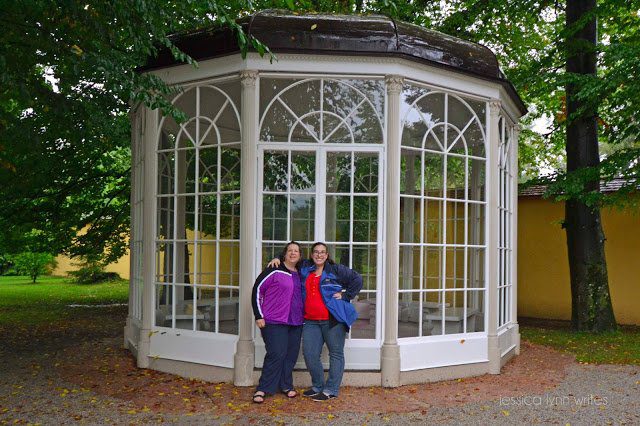 So the gazebo we’re standing in front of is what they used in the film for the outside shots and they moved it from it’s original location to this place. The inside scenes—like with the two lovebirds dancing on the benches—were actually filmed in a studio in Hollywood. Kinda a downer, right? They also don’t let you go inside…or at least, we couldn’t. It was still fun to stand outside and see it. I may or may not have sang “I am 16 going on 17” while twirling around with my umbrella. It was pretty awesome. 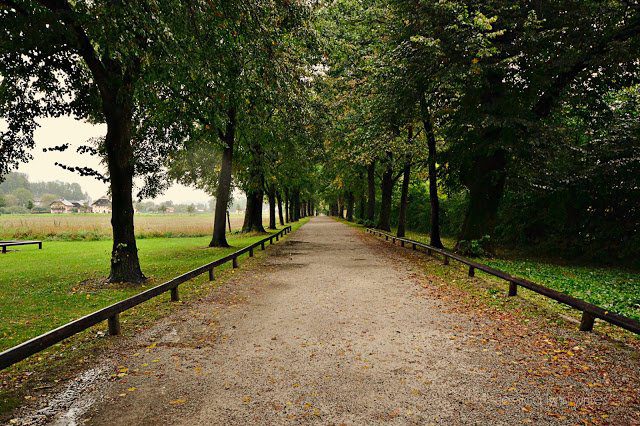 Okay, the photo above may look like the scene where the kids are hanging from the trees in their new, fancy clothes, but it’s not. It’s from the scene where Maria is going to the Von Trapp’s house for the first time. I believe she’s singing “I Have Confidence.” I’d have confidence walking there, too—so pretty!

Speaking of the Von Trapps, I bet you want to see their house (from the movie)! I wanted to see it, too. Unfortunately, you can’t actually see it up close. This was the best shot I could get…and it’s zoomed in a lot. 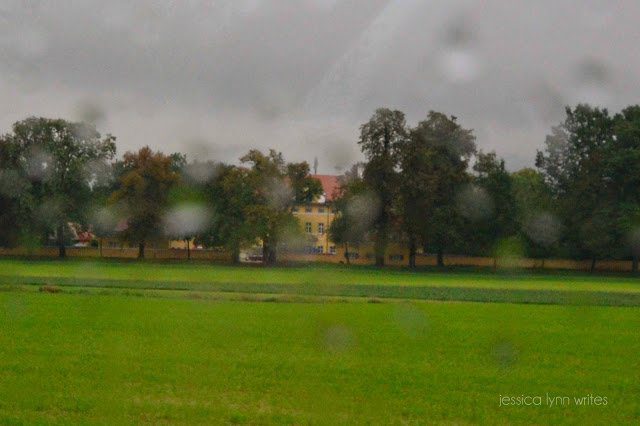 I was a little disappointed that we only got a brief drive-by look at the house, but the next stop made up for it. You know the scene where the kids are coming back from their trip to town, all dolled up in their new clothes, and they’re in the boat that tips over? That happened at Leopoldskron Lake: 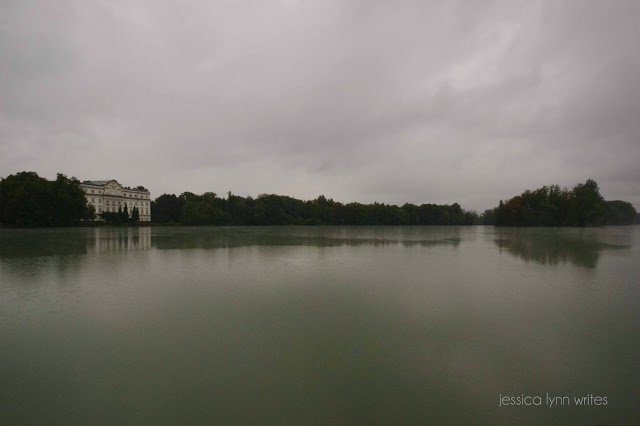 I hate to be the bearer of bad news, but that’s not a shot of the house, either. Well, not exactly. It is a view of the Leopoldskron Palace (where the gazebo was originally), and the scene where Von Trapp and his family are arguing and drinking lemonade was filmed at another nearby house. They kept the patio/deck that’s there and then did some Hollywood magic with putting in the rest of the house. So tricky, those movie people!

The next stop on our tour involved a decent amount of driving to get there, but luckily, driving in Austria is more than a treat. It’s an absolutely gorgeous country! While we drove there, our bus participated in a lot of singing. I bet you can figure out what song we started belting out just by looking at the next two photos: 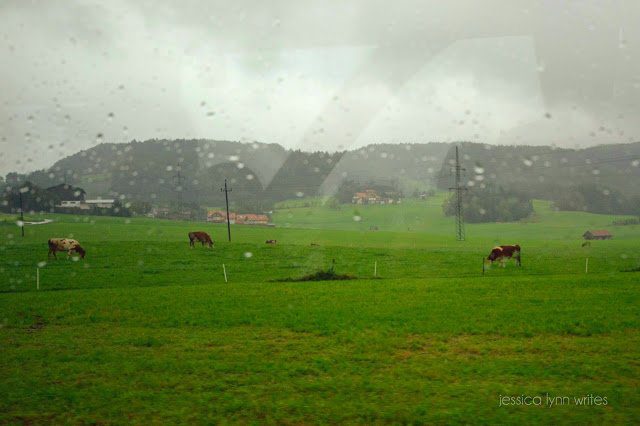 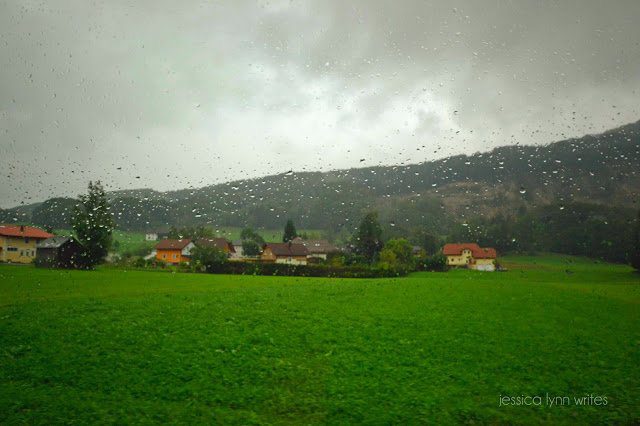 The hills, my friends, were most definitely alive with the sound of music! Seriously, despite the gloomy, yucky day, it almost made this part of the journey more fun because everything was so much more vibrant and green. 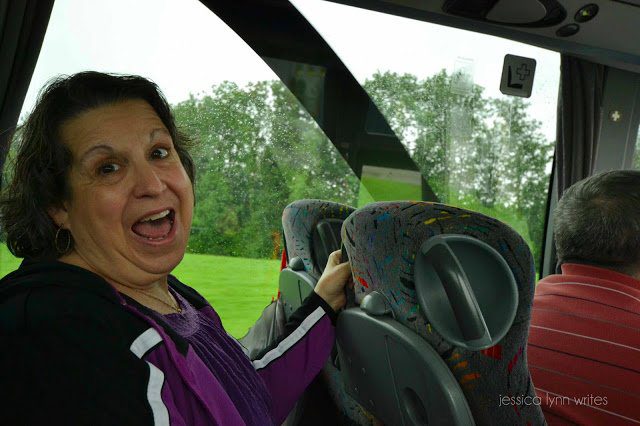 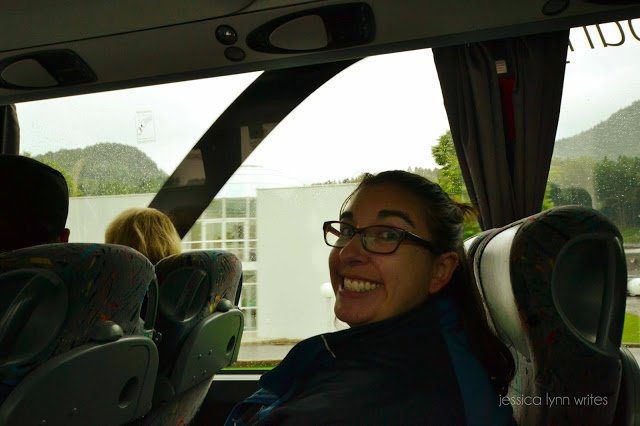 My mom and I had a lot of fun singing along with the soundtrack, and even though I didn’t get a picture of him, we caught my dad singing along more than once! 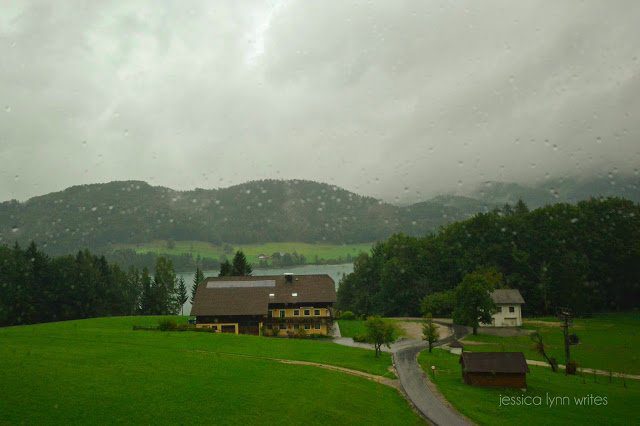 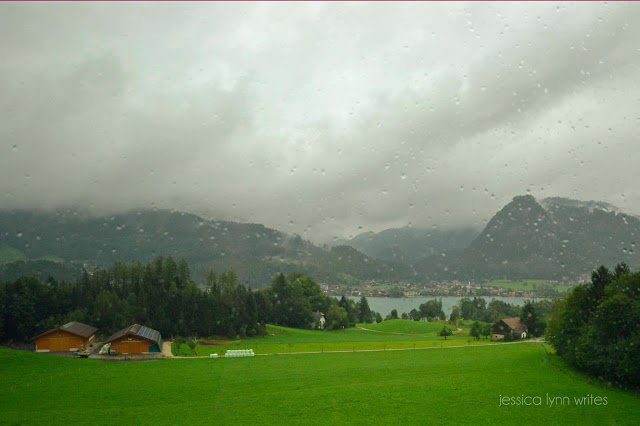 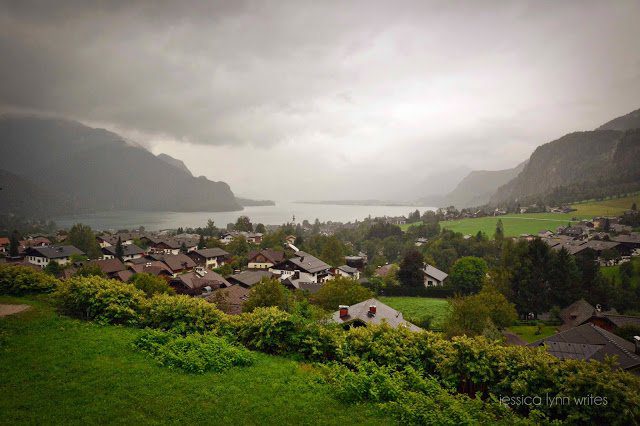 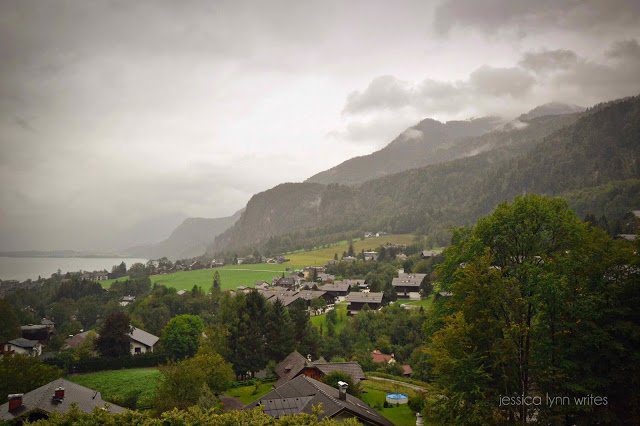 Our final stop was to see the place where Maria and the captain were married (in the movie). (In real life they were married at the Nonnberg Abbey in Salzburg.) When we got there we discovered that the tour buses weren’t allowed into town, so they parked outside of town. Our options to get to the church were to walk or take a little train. It was FREEZING and we didn’t know when the train would get around to showing up, so I decided to walk. The town, Mondsee, was adorable and I wish I took pictures (I was too cold!).

While we were walking, the guide pointed out a tree-lined street that looked familiar: it was where they filmed the scene with the kids up in the trees wearing the clothes made out of curtains. I was going to take a picture on the way back…but it started raining again and since the TOMS I was wearing aren’t good around water, I took the train back. Sooo…no pictures of that, sorry!

Once we got to the church I was blown away by the ornate decoration inside, but I was also astonished at how many people were there and how disrespectful the entire thing felt to me. This gorgeous cathedral was nothing but a tourist trap, and it felt so wrong to only be in there to take pictures because it was in a movie years ago. People were talking—loudly—and it was elbow-to-elbow wherever you turned, with cameras out everywhere. I was just taken back by the whole thing.

With that said, I did take a few pictures (like the one above), but I almost wish I didn’t, because I just contributed to what bugged me while I was there.

All in all, I really enjoyed the tour. They also showed us a few more sites in the city (the Abbey, the
fortress, and the gardens), but the pictures I took didn’t come out well
since it was raining so much. I wish the weather was nicer, but I don’t think it would’ve mattered much except for better photos. Since it was a bus tour, I knew we’d be seeing most of the sites from behind the big glass windows. I also knew, from researching before the tour, how most of the sites from the movie aren’t available for public access. I believe there’s a SOM bike and/or walking tour you can take, which would be great on a sunny, warm day, but this particular tour worked out perfectly for us.

Up next on my adventure with my parents: We start our cruise!
*linking up with Helene in Between