Skip to content
My parents came out to visit for three weeks! Catch up on our adventure:
Driving through Austria and a Meal in Mittenwald
Harvesting Grapes with the Parents
An Italian Market and Unexpected Detours
Dachau Concentration Camp
McDonald’s in Munich
The Sound of Music Tour in Austria
Our Family Suite and Venice
Bari, Italy

I’m typically a morning person, but pregnancy had me waking so much earlier than any person should ever be awake. I was bright-eyed and ready to start each day at 4 am. Seriously, even for a morning person, that’s too early! Luckily, I took advantage of the peaceful hour and lounged on the balcony, watching the world float right on by me.

Greece, it turns out, looks delicious at dawn. 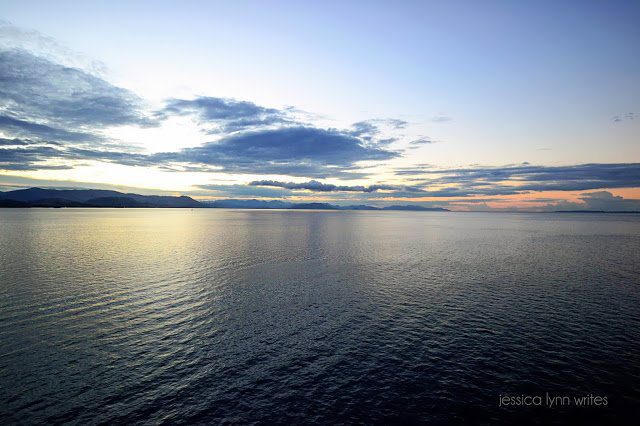 Just as the day before, we picked an easy, panoramic excursion of Corfu. The thing about excursions is that you kind of want to do all of them, so picking just one is a hard task. I went on this trip with my parents, so we picked more relaxing excursions that still allowed us to see each new place. As someone who plans all of her trips, it was nice to sit back, relax, and have someone else take us around this time.

That morning, just after the sun rose above the sorbet-colored sky, we loaded into the bus and hit the road to Paleokastritsa Bay, a place referred to as the “Capri” of Greece. As someone who’s been to Capri, Italy, I was definitely excited to check this place out. But more than that, this area supposedly has Greek mythology ties. There’s a huge rock that apparently resembles the petrified ship of Odysseus. Now that was something I wanted to see with my own eyes! 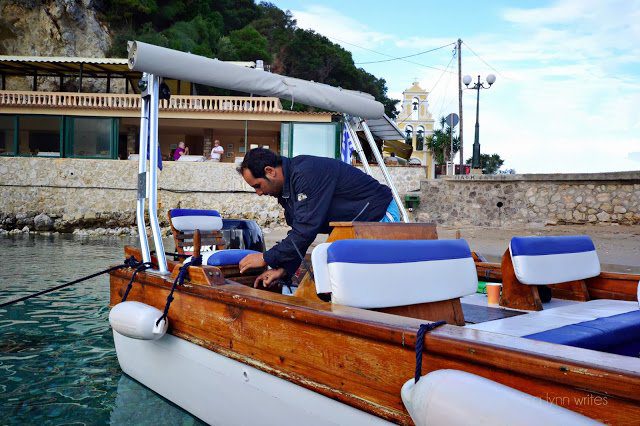 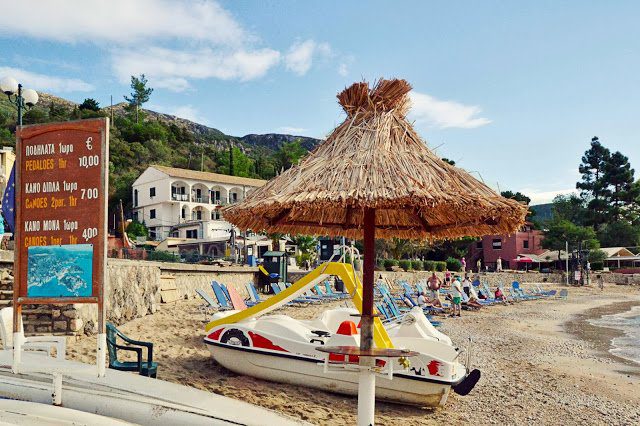 Once we made it to Paleokastritsa, we had the opportunity to hop aboard a boat and take a ride around the bay. You didn’t have to ask me twice; I climbed aboard that boat with my camera strapped around my neck and got ready to set sail. The views from sea were amazing and since we were there early in the day, everything felt so serene and peaceful. 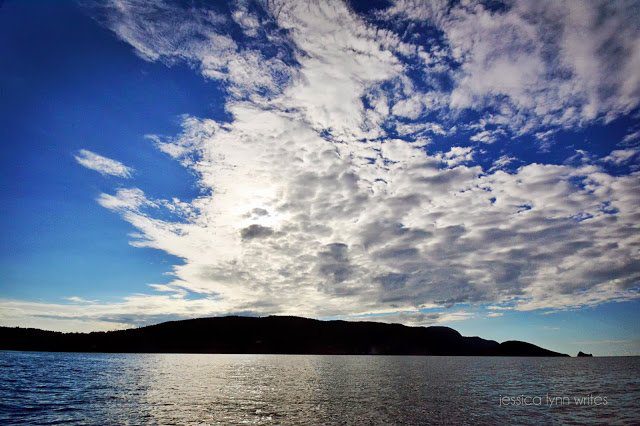 I loved the enormous rock creations jutting out across the water. We
sometimes rode so close I felt like I could touch them. They all had so
much character etched into them that it made me feel extremely small
and so young compared to how many years they’ve been there. 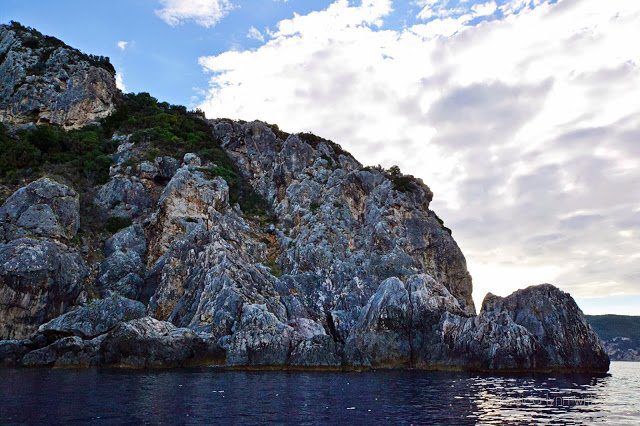 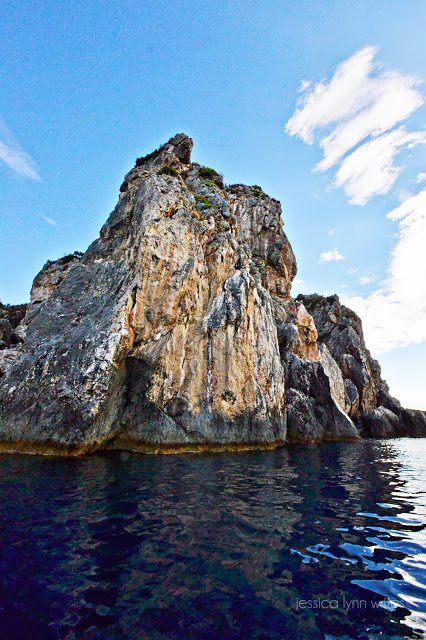 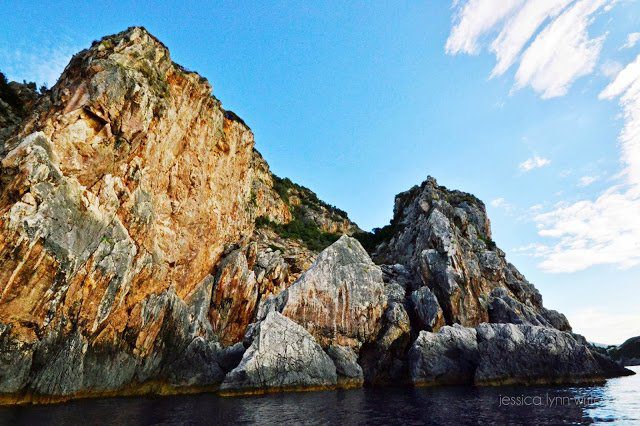 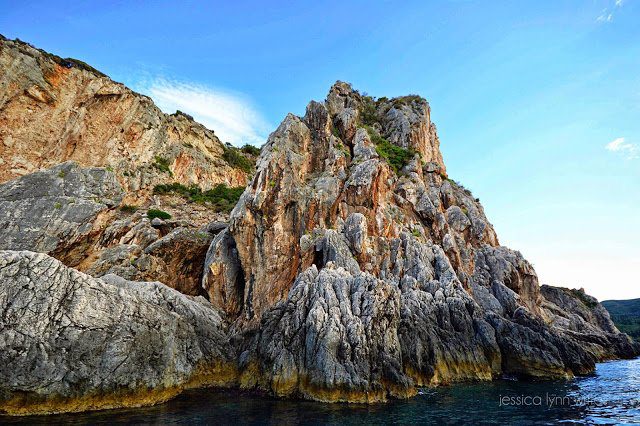 We went into a few caves and saw gorgeous natural colors forming above and below the water, including vibrant shades of pink. 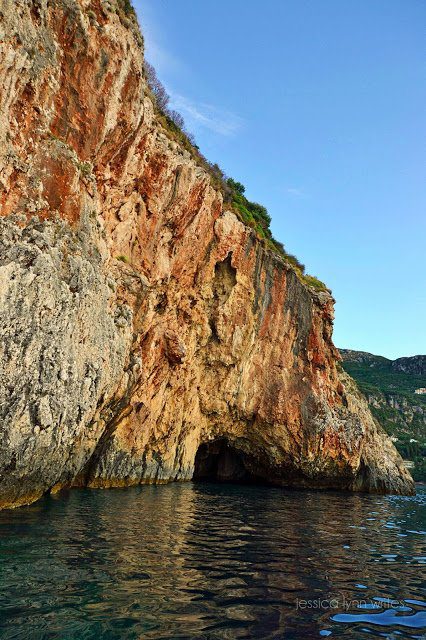 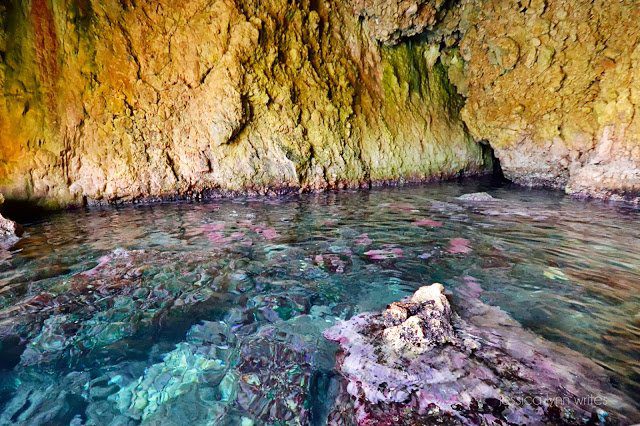 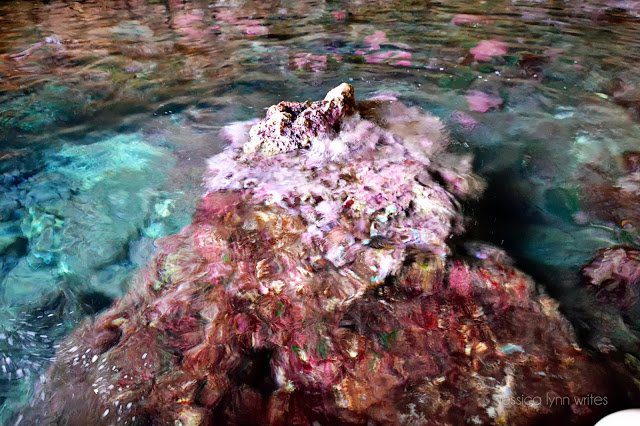 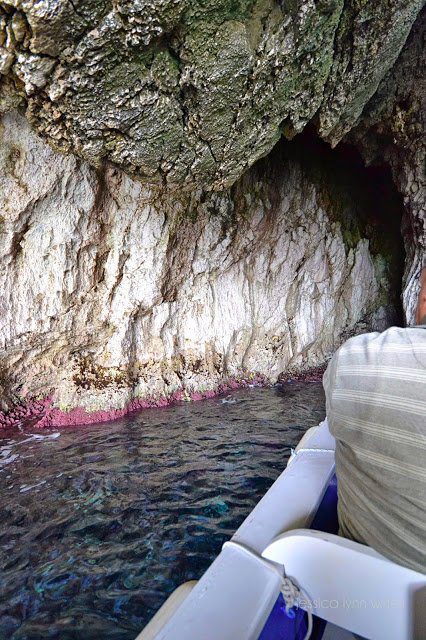 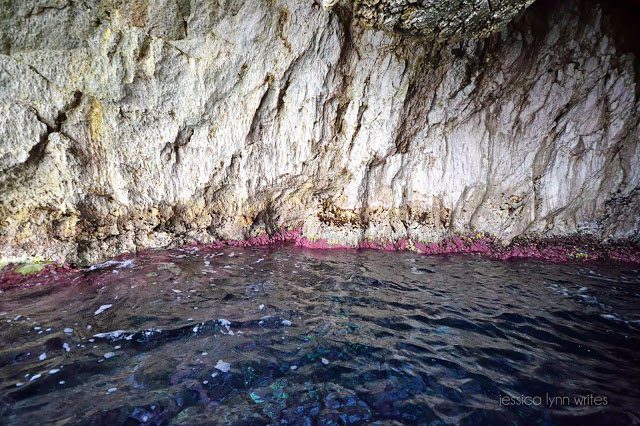 To be honest, the only similarity between Paleokastritsa and Capri, was when we saw their version of the Blue Grotto. When the light hit this area, the sea looked like a stunning shade of turquoise. The blue-green hue was so bright it looked like there was a light under the water, illuminating everything within reach. 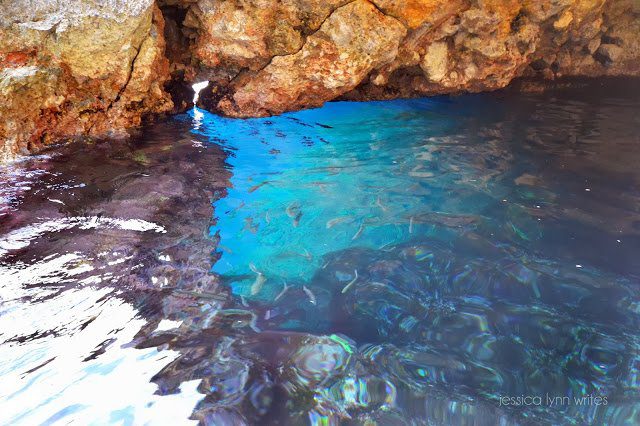 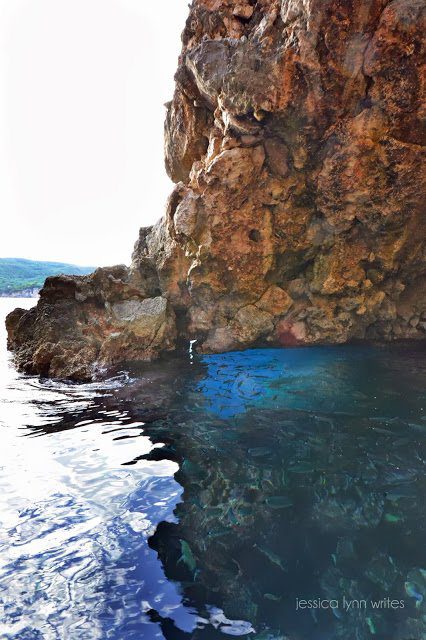 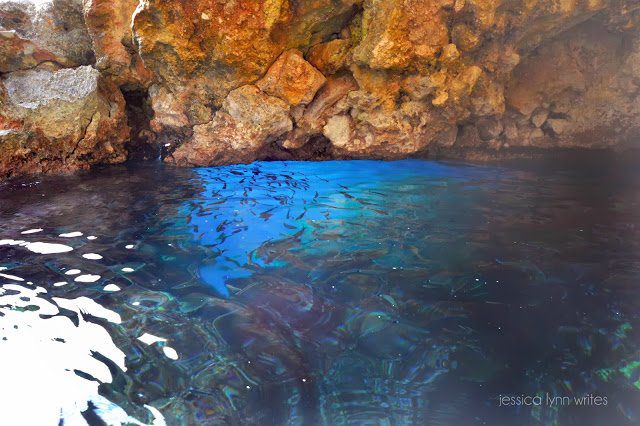 Then, before we headed back we saw a glimpse in the far-off distance of Odysseus’s mythical ship. I guess if you squinted hard enough and tilted your head in just the right way it could look like a ship? Either way, it was neat to see. (You can also see it in the third picture in this post.) 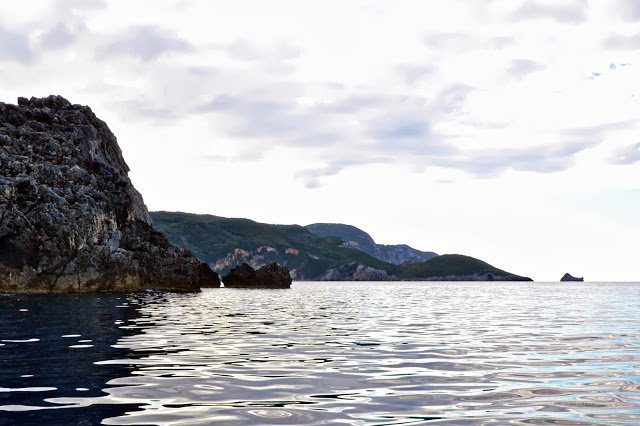 The actual town of Paleokastritsa had a few huts with touristy trinkets inside, but I didn’t have much time to look at them since I opted for the boat ride. Before I knew it, we were on our way to our next stop: Lakones.

Getting to Lakones was outrageous! We’ve driven on some pretty twisty tiny roads here in Italy, but the road we took to get up to Lakones was Crazy (well deserved of the capital “C.”). I literally thought we were going to tip over the edge of cliffs, and I honestly don’t know how the bus fit through the narrow passage ways. I was sitting next to the window and I swear the buildings were scraping against the bus. Whew! Somehow, though, we made it to the little town. 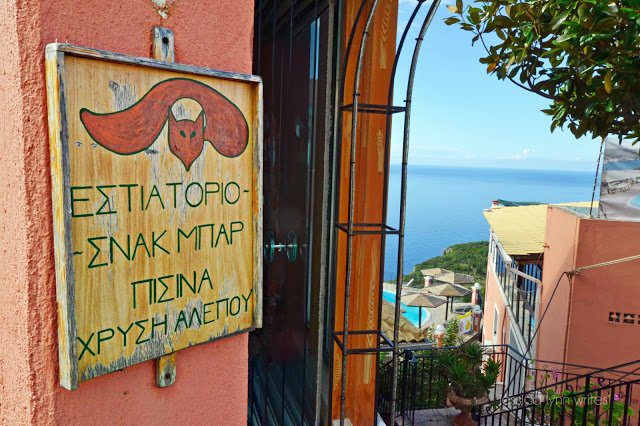 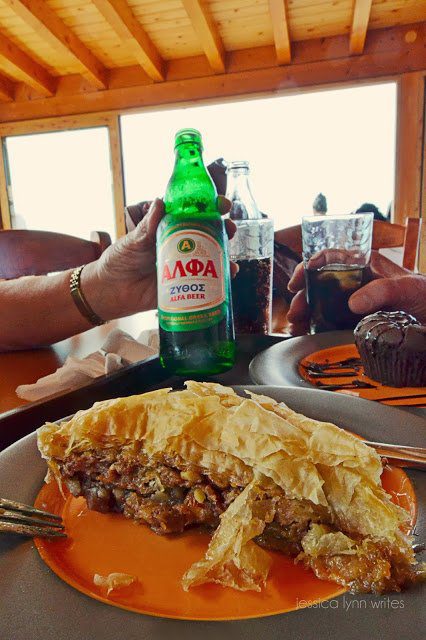 This stop was essentially a food, photo, and shopping break. We had some traditional baklavah, my mom had some Greek beer (I savored a sip—goodness I missed beer while I was pregnant!), and I snapped some photos. Locals call Lakones “God’s Balcony,” because of the gorgeous panoramic scenic views of Paleokastritsa Bay, the crystal blue water, lush olive-groove hills, and the surrounding island. 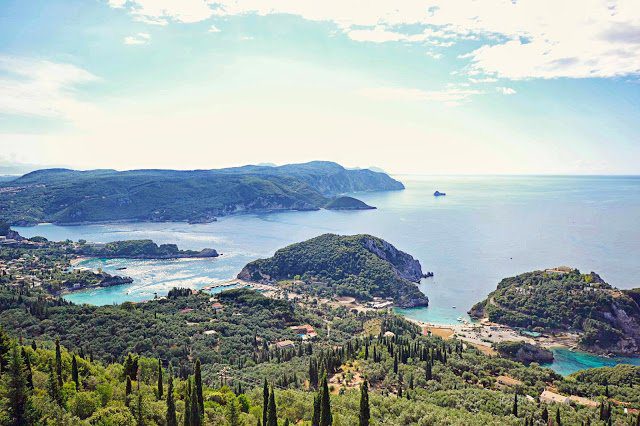 After our quick break we were back on the bus and headed back into Corfu. We saw a whole bunch of historic sights along the way, but to be honest, I think I took a nap. In fact, I did take a nap, because I woke up to discover that the bus was stuck in the middle of a Greek road, during rush hour, no less! A tiny car parked illegally, which didn’t bode well for a big bus, a corner, and a tiny road. 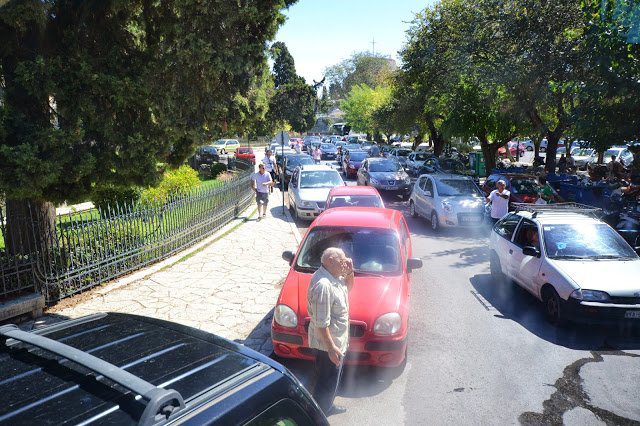 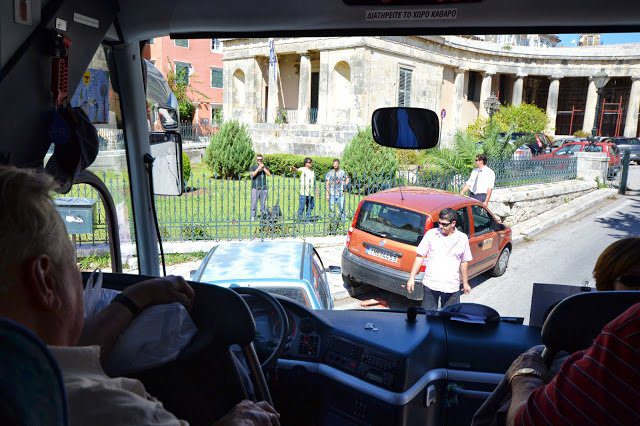 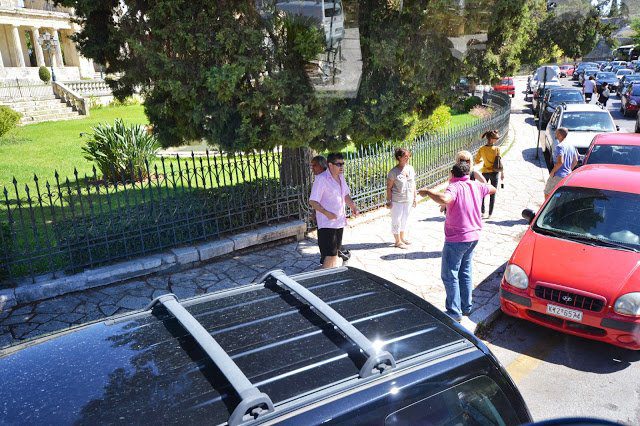 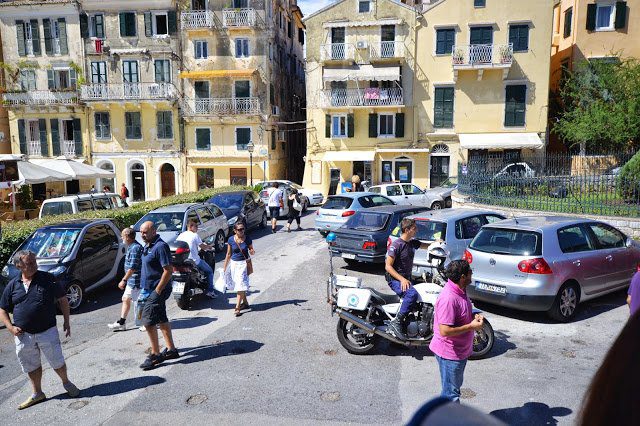 It caused a pretty big hullabaloo with the locals; most drivers got out of their cars and started using very large gestures to show just how mad they were about this situation. The Greek police even showed up when a group of men got together and started moving the blocked car! Luckily, the owner appeared just in the nick of time, acting like nothing was wrong, and moved his car.

I really enjoyed our day outside Corfu and traveling around Greece’s seaside. Our next stop was Santorini, a place I couldn’t wait to see with my own eyes!