Skip to content
So, if there’s one thing I learned from my post last week it’s that y’all thought I was lying about going to bed so early. Heh…that was no lie, folks. In fact, it’s 8:50 pm right now and I’m exhausted and want to be sleeping. Why am I awake then, you ask? Because “Cutthroat Kitchen” is on in nine minutes and the crazy chick from one of the past “The Food Network Star” is on this particular episode, and I really want to watch it.

But back to my pathetic awesome bedtime…

You know the phrase “sleep like a baby”? Well, my daughter really needs to get the memo that sleep is good. No, not good; sleep is the most marvelous thing in the entire world and should happen for much longer stretches at a time. 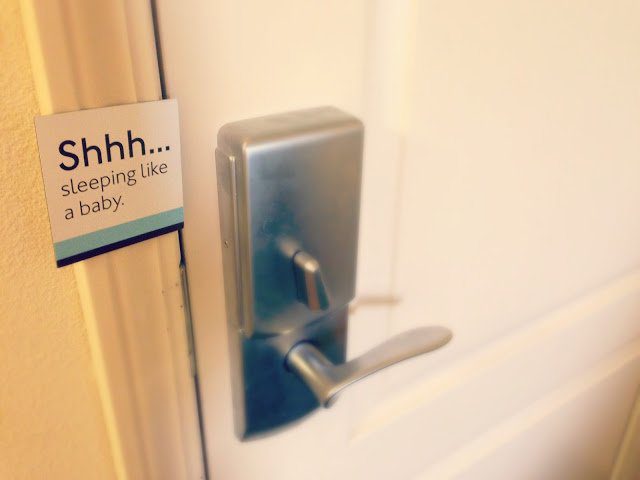 A couple weeks before we left Italy (around four months) she started sleeping through the night. Life was fantastic and I was actually a little tired during the day because I was getting so much extra sleep; my body just wasn’t used getting more than a few hours rest each night. The first time it happened I woke up in the middle of the night freaked out that something was wrong, but once I knew she was still breathing, I went on in a sleepy haze and had the best pumping session ever. The good sleep streak lasted about a week and then came to an abrupt stop.

We chalked her restless nights up to the transatlantic flight to America. Getting used to the time change is rough on everyone, plus she had a lot of stimulation from seeing so many people during those first couple weeks, but then her frequent wake ups became the norm. We tried everything: supplemented more milk, gave her less milk, put her down earlier, put her down later, gave her a lovey, gave her a bath, rocked her, sang to her; you name it, we tried it.

I hear of other moms who get up once or twice a night to feed their babies (and maybe I’m wrong for assuming), but I’m wondering if their kids scream when they wake up or if they’re able to just gently wake them, feed them, and then they go back to bed easily. Julia cries and grunts and screams and then won’t go back to sleep at all. This happens about three times a night (11ish, 1ish and 3 or 4ish), which just makes me exhausted. During the day for nap times I usually sway/bounce her to sleep—I have that regime down to about 5 minutes (oh how I long for a rocking chair), but doing that at night when I’m half awake is next to impossible.

Just when I think she’s asleep in my arms, I’ll put her down only to have her wake up a few seconds later, screaming her little baby head off. I know the situation is a little more unique since we’re in a hotel room and she’s literally two feet away from us (I don’t want to wake up whoever is on the other side of the wall with her crying), but add in the fact that I still try to pump in the middle of the night (I have a low supply and that’s when I get the most milk…post about that coming soon), and I feel like I never sleep.

We’ve actually moved to co-sleeping part of the night. She starts out in her pack ‘n
play and then after it’s obvious that I’m not getting her back to dream land, I move her into our bed. That’s where she at least stays quiet and still because she side nurses the rest of the night (aka treats me like a pacifier). Enter the reason why I typically try to go to bed at 8 pm: It’s where I’m almost guaranteed to get my longest stretch of sleep, a whopping three hours. I may go to bed at 8 pm, but I never said I sleep the whole night long!

I’ve started dreading the night, because I know I’m not going to get more than a couple hours of sleep. When I hear someone ask “Oh, is she sleeping through the night?” I basically want to punch them in the throat. Instead, I put a sleepy smile on my face and say, “No, not quite yet.” They never really know what to say after that.

I’m hoping that once we move into our house (19 more days), and into her crib in her own room, things may be better, maybe. Until then, I’ll keep my 8 pm bedtime.