Soooooo…..my baby is officially cutting a tooth. I’m not gonna lie: I cried when I saw—and felt—the little little slit where her tooth is starting to poke out of her gum. Was crying over dramatic of me? Maybe, but my little baby is on her way to growing up, and I’m going to desperately miss her adorable gummy smile. The next thing I know is that she’s going to need braces! Poor little thing, both her mom and dad both sported wires on their teeth for far, far too long; she has no chance at having straight teeth. But I digress.

Teething equals crying and tears, and I’m not just talking about for me. Julia’s been teething like crazy lately, which makes sense now that we can actually see the culprit. We’ve been covered in drool, dealing with fussy nights, and she even sported a fever one day (or that could have corresponded with the shots she got earlier that day). Needless to say, we’ve had our share of teething apparatuses floating around the house and I’m here to share our favorites with you. 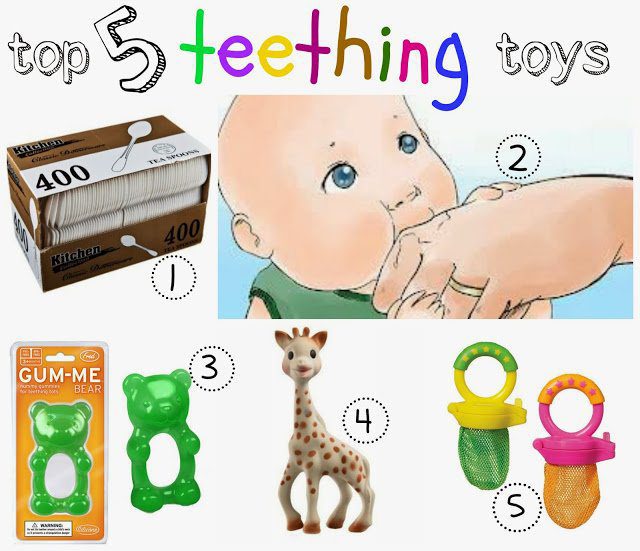 1. Spoons. Forget paying a lot of money on a teether; just grab a box of spoons! She LOVES holding a spoon. Another benefit? She’d rather spoon feed herself sometimes instead of us feeding her. And one more selling point? You can find plastic spoons just about anywhere. We joke that it’s her “security spoon.”

2. A (clean) Finger.
This is probably her favorite toy out there. Best of all: it’s free!
Worst part: She chomps down pretty hard and it hurts! Now that she has a
little razor tooth starting to poke through, I’m scared of letting her use my finger as a toy.

.
I bought this on a whim when I was killing time in a store one day
because it had an awesome name. I mean, it’s a bear and she gums it, and
it looks like ginormous gummy bear. That’s a pretty great name,
right? Well, she likes this thing a lot. I put a little link on it and
can attach it to things so it doesn’t constantly fall on the ground.

. A friend gave us Sophie before she was born and I’m so thankful for it. We gave it to Julia when she was a newborn and I didn’t get why it was so amazing. I think I literally said this out loud multiple times: “Why does everyone swoon over Sophie? She hates this thing.” Then, one day, a light switched on and she stuck it on her mouth; she’s loved it ever since. If your little one doesn’t like it right away, just wait a few weeks/months and give it to her again later.

Someone gave me these at my baby shower and I found them while unpacking, just in the nick of time. They’re designed to put food in them, but that gets pretty darn messy. I fill it with ice chips instead, and she LOVES it. The cold feels good on her gums and the ice chips are hard enough to help her teeth. The only downside is that she gets pretty wet since the ice melts, but she’s usually already drooling so it doesn’t really matter that much.

So there you have it: our fab five teething toys. What are you favorite teethers out there? Have you tried any of the above?