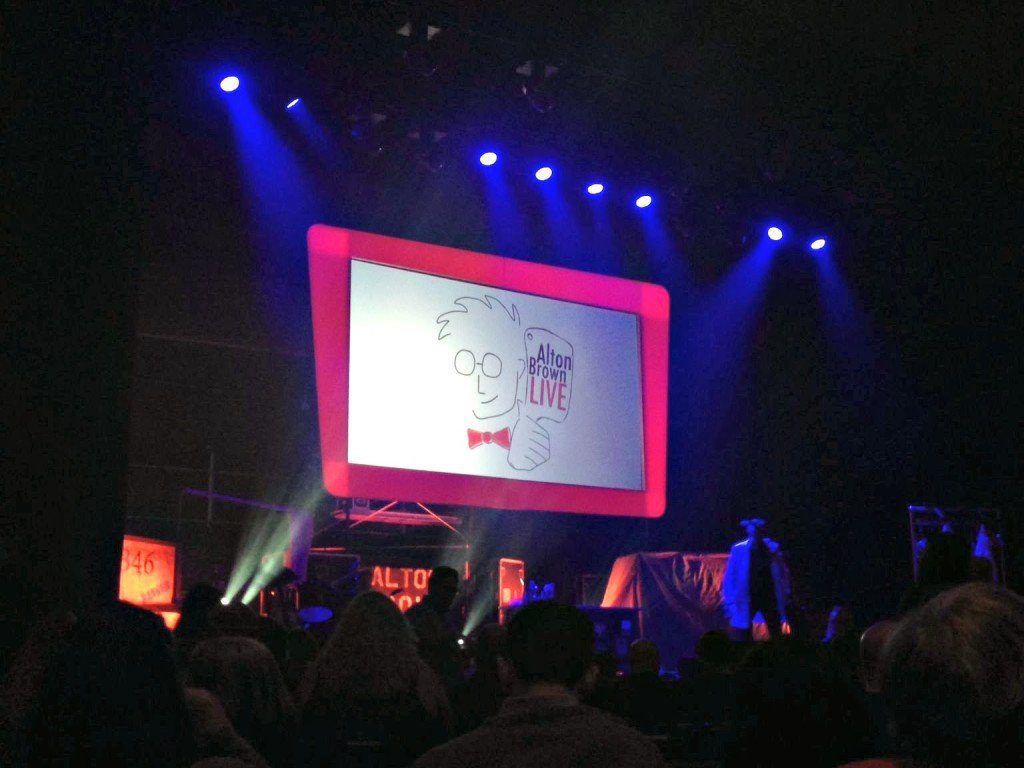 Let me back up, though. My husband has been a long-time fan of A.B. (and yes, we call him “A.B.” around the house). We’ve used his recipes dozens (hundreds?) of times, have seen pretty much all of his “Good Eats” shows, my husband reads his blog, and we listen to his podcasts as they come out each week. It’s very safe to say that my husband has a very large man crush on Mr. Brown.

So back in June, when we were still living in Italy (my husband was actually deployed at the time), we saw that he was going on a live tour across America for his Edible Inevitable Tour. We thought it’d be awesome if we could see him, but of course, we had no idea if our schedule would allow for such a thing. I mean, we’re talking about buying tickets like eight months in advance while living in a different country, which is crazy talk, especially if you’re in the military! But we saw that he’d be in Atlanta and couldn’t pass up the opportunity. I knew the show would sell out (he lives in ATL), so I splurged and bought the tickets, figuring I could sell them if need be.

Fast forward to the actual show. My parents flew out to babysit Julia for the evening. (Just kidding…they didn’t come out only for that. Her birthday is tomorrow, so it was perfect timing all around.) We got to the Fox Theater and knew we were in for an excellent night. Seeing as how this was our second date in a matter of months, we were pretty darn excited. 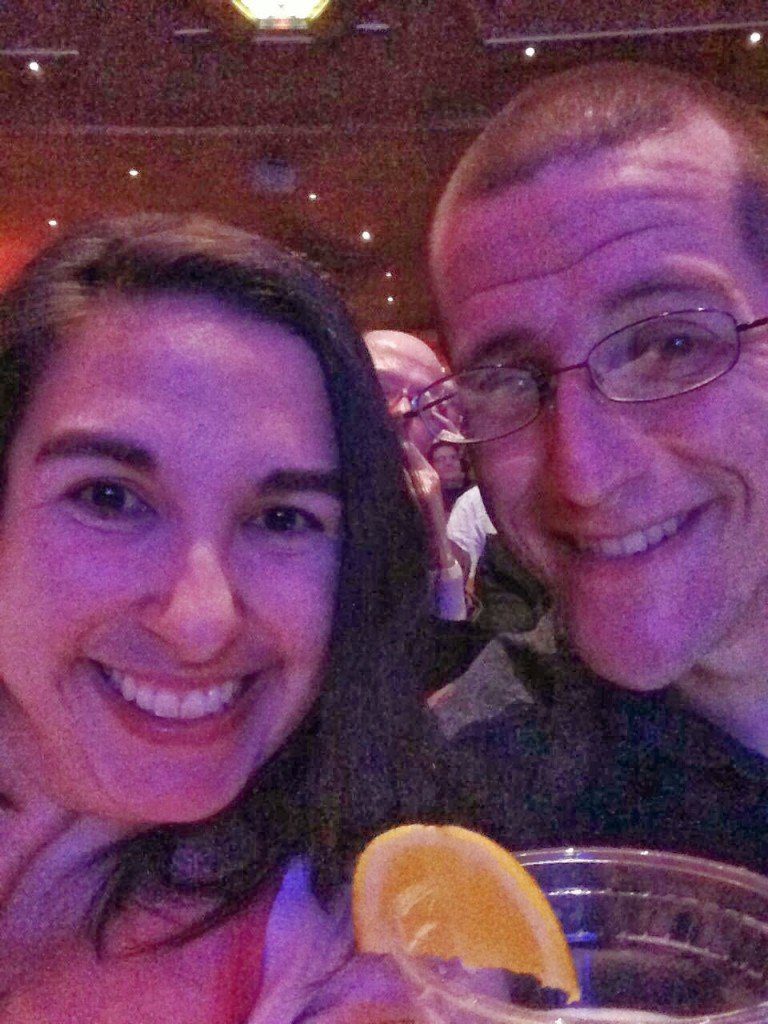 You can’t see it from my photos (note to self: don’t drop your phone in the ocean, because it will ruin the camera), but the Fox Theater is awesome. I’m already looking into more shows to see there (and for babysitters in the area since grandparents can’t come out every time we want a date.) Once inside the theater, we grabbed a hot dog and a beer—good, good eats—to keep it classy, of course. Then we went to our seats.

Now if you remember (from three paragraphs up), I bought these tickets eight months in advance, so I didn’t have a clue where they were located. Well, it turns out I did a great job with seat selections, because we were just spitting distance from A.B. Okay, we were a bit further than that, but still really really close.

So, Alton Brown. Oh me, oh my. You know how people always ask what celebrity you’d want to invite over for dinner? My answer—hands down—would be Julia Roberts and Alton Brown. (Julia Roberts, because {duh} she’s Julia Roberts) and A.B. because he’s absolutely fantastic! He’s an amazing entertainer, storyteller, educator, musician, scientist, foodie, and I’m sure the list could go on.

He started the show off by running on stage dressed in casual attire—fitted jeans, white button up with a vest over it, and his signature bow-tie. He sported a beard, and a raspy voice, from one performance too many, I’m sure, and a promise that we’d all have a great evening. He was right. 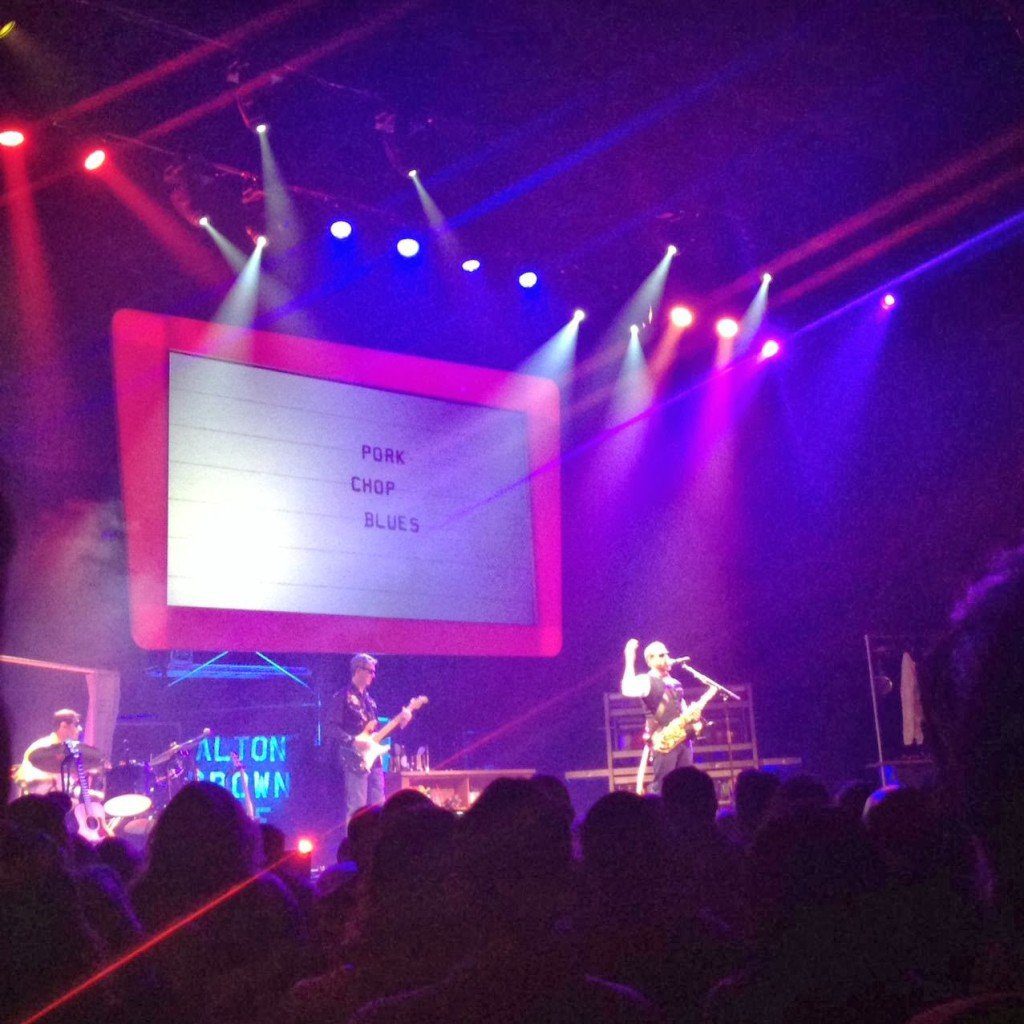 Did you know Brown’s a musician? I didn’t either, but he is, and he rocks. He plays the guitar, saxophone, and he sings. His band consisted one of the guys who played the lawyer on “Good Eats” and the guy who did all of the music for the show. Naturally, all of their songs were about food. They performed hits about pork chops, shrimp, a lullaby about how to cook, and hard rock tune about an easy bake oven. Funky food songs are where it’s at if you’re A.B.!

I practically had a smile plastered on my face during the entire show, as did my husband, and it only got bigger as the night went on. Alton discussed—in hilarious details—10 things he was sure he knew about food. Take for example, the fact that chicken fingers aren’t actually chicken fingers. (Yeaaah, chickens don’t have fingers, they have feet, and he had the keen idea to share that fun fact with his daughter…and four of her friends during a slumber party…after they requested “chicken fingers” for dinner. He gave them chicken feet instead; I bet you can figure out how well that went over with five little girls!) Like I said, he’s a hilarious storyteller. 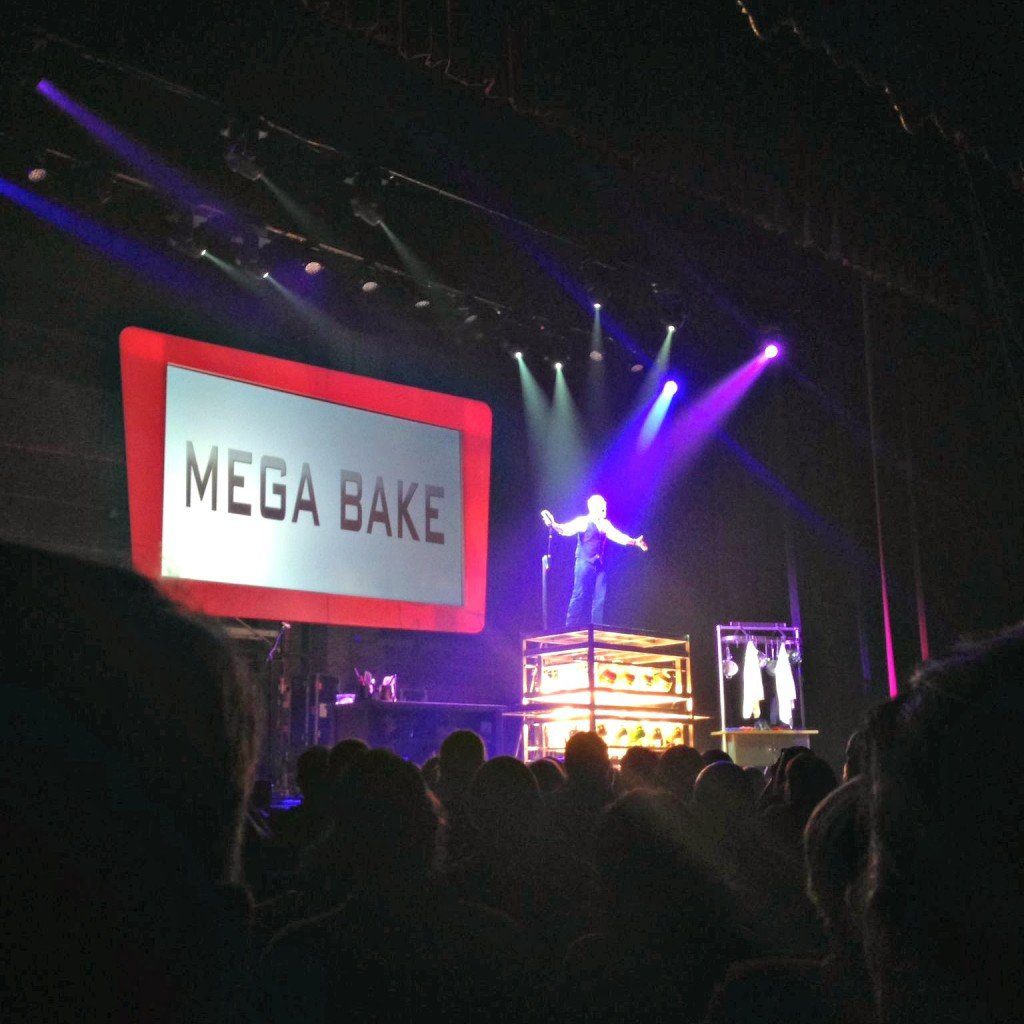 Alton Brown is definitely the master of culinary creativity and that was proven with his hands on food experiments. We’re talking about making ice cream out of water coolers and a fire extinguisher, and making pizza out of a ginormous easy bake oven, aptly renamed as the MEGA OVEN. Sadly, we didn’t get to taste either of them, but they looked and smelled delicious.

All in all, I would absolutely see this show again. I even commented that I wish they sold it or would air it online so we could watch it one more time—it was that entertaining. There were burping (yeast) puppets, music, food, hilarious tales, educational tid-bits and so much more. Plus, I saw it with my husband by my side and a hot dog and blue moon in my belly. What’s not to love about all of that?