It’s ironic that, out of allllllll the costumes out there for little munchkins, I picked out a pumpkin. The irony is found in the fact that I don’t like pumpkin-flavored things, and I truly think the pumpkin craze is more than a little out of control this year. But that’s besides the point, I think. 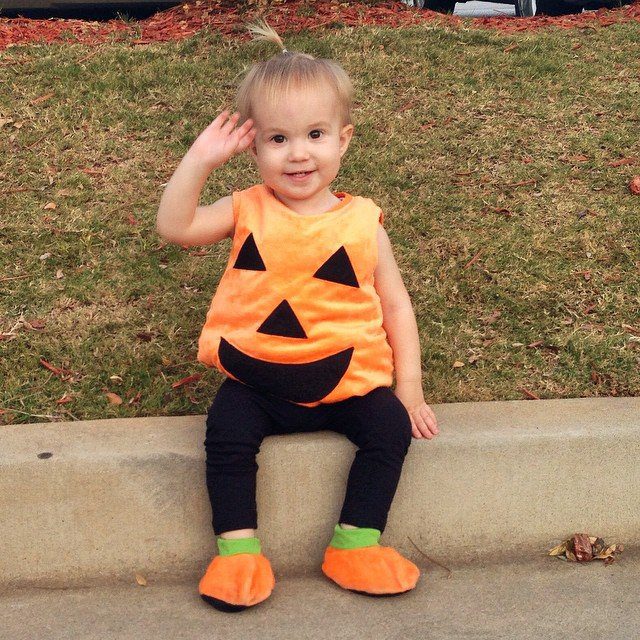 I saw costumes on sale back in July at Costco* and I snatched one up right away, just in case I didn’t come across anything better later. I love the little animal costumes, but sometimes it’s hard to tell what the kid/costume actually is, so I went the safe route: an orange pumpkin. There’s no fooling that. Only the hat that came with it doesn’t fit her head, so we scratched that idea. Besides, her little piece of hair that sticks up (and is now in a pony tail sometimes) sort of looks like a pumpkin stem. I suppose if I were really on top of this thing I could’ve found a green bow somewhere and that could’ve been a “leaf.”

I also figured that if she was a pumpkin, I could wear the same “costume” I wore the last time I was pregnant...because I’m cheap and had no desire to actually come up with something to wear with this pregnant belly of mine. I’m hoping to get a photo of me in it today since I’m seven weeks further along than the last time I wore it.

Anywho, whether she’s literally stuffed inside a pumpkin or wearing a pumpkin costume, it turns out that I make a really adorable pumpkin.

*I didn’t actually get her costume back in July. It was actually in August, but seriously? What’s with holidays starting earlier and earlier in stores these days? I was trying to find Thanksgiving decor and several stores told me that they weren’t even getting any in. It’s like the next holiday after Halloween will be Christmas! Let’s give each holiday its own time to shine, yes?