This post is honestly just a brain dump, if you will, of stuff going on around here. I know, so eloquent of me to say “brain dump,” but really, it’s not all that cohesive and I ramble far too much to just make simple bullet points for each one. So here, read all about our current happenings…and stuff.

It’s amazing how the days can linger during a deployment, but once they’re home, that two weeks of leave flies right on by. We’ve been making the most of our time by traveling, naturally. Last week we went up to Atlanta for a few days, and yesterday we drove home from Charleston, South Carolina. We’re not just stopping there—next week we’re off to one of my favorite places in Georgia: Pine Mountain for Callaway Garden’s Fantasy in Lights, and then the week after we’re going to Helen, Georgia, for their Christmas market.

See, traveling doesn’t have to cease to exist just because you don’t live in Europe anymore or because you have kids! What does sometimes end are the insane amounts of photos I take so I can share our trips with you, and for that, I’m sorry. Instead, you get a picture of food here and there on my instagram account, or a random picture of my daughter gawking at an albino alligator. But I’m not sorry for hanging out and spending time with my family. So, #sorrynotsorry. You understand, right?

We bought a double stroller (a City Select Baby Jogger) from Buy Buy Baby (it came with a second free seat and we dig the color, so we bit the bullet and bought it), and we’ve been taking it for a stroll with Julia in tow. I like the fact that there are a lot of different options as far as seat placement, and that both kids will be able to see out (instead of one being stuck behind another seat). It’s also a beast, drives (steers?) really smoothly, and seems incredibly sturdy. Other bonuses: it folds up smaller than our single stroller (that we’ll be selling) and it’s light—all things considered. Downfall: in order to close it up with two seats installed, I have to take off a seat. I’m hoping the pros will outweigh that particular con. 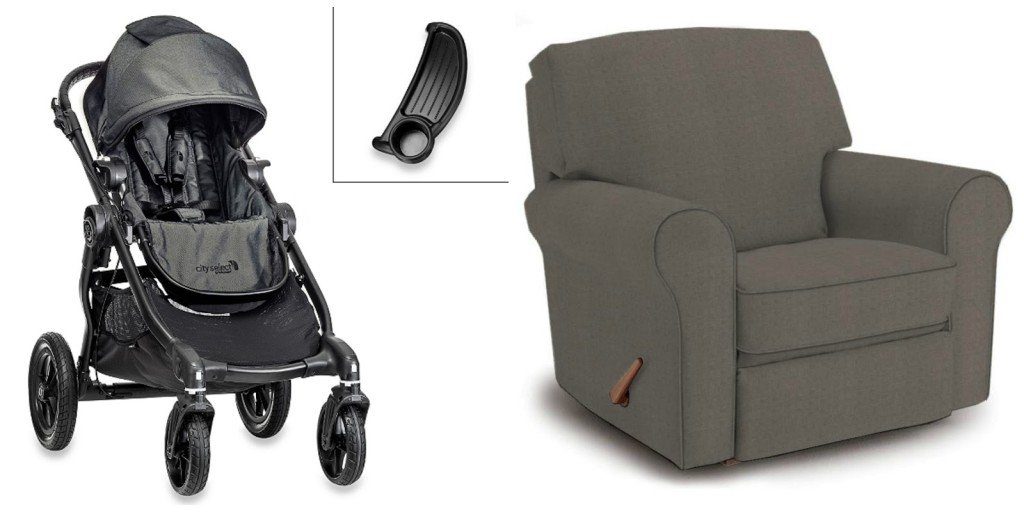 We also bought a rocker/glider/recliner and I’m beyond excited to get my butt in it. It’s a “Best” Chair called Irvington, and we also got it from Buy Buy Baby. I probably tested around 50 chairs and that was the one that won. I like that the seat is roomy enough for me to sit cross-legged (how I prefer to sit when breastfeeding) and it’s big enough for Julia to sit in the seat next to me. The recliner is also super quiet, instead of loud and mechanical-sounding (like a La-Z-boy). This should come in right around Christmas and I’m so, so, so excited to relax in it before the baby gets here!

I think we made a decision on her nursery. She and Julia will possibly, maybe, share a room together. The baby won’t even sleep in a crib until she’s around four months old and hopefully sleeping through the night, so we still have a little more than half a year to figure out all the details, but I love Julia’s room and can’t imagine making another nursery. Plus, there’s more than enough room in J’s room, and now we won’t need to buy any more furniture other than a toddler bed in the future.

As for a name…that’s still up in the air. We have a few on the table, but we’re trying to work out the spelling. I always said I wanted a name that would be easy to spell, but we have two names we love and as luck would have it, there are a few variations of spellings. Grrr. Decisions, decisions.

On the bright side, we have a middle name picked out. My husband’s loved this particular name for awhile, and I’m pretty positive he was ecstatic to hear we’re having a girl so he could use it. Not spilling the beans on that particular name yet, though…

Health wise, we’re both doing well so far! Feeling some aches and pains, mostly in my back after a lot of walking or a lot of sitting, but that’s all “normal.” I went in for the routine glucose test (the one-hour one) on Monday and ended up failing it by four stupid points. Since I didn’t pass, they had me do the three-hour test, and I decided to rip off the band-aid and do it the next day.

How’d it go? Well, long story short: I passed (YAY!) and don’t have gestational diabetes. Long story not short: it sucked and I will not be doing it again if I have any more babies. I’m mad I didn’t look into alternative ways to test before I agreed to do this, because I absolutely hate the fact that I drank that drink multiple times, and put my body through a fasting like that. I’m all for fasting and cleanses when you’re not pregnant, but not now. The drink (I’m pretty positive) tasted twice as strong as the other ones, and it wasn’t cold at all. Usually you get five minutes to drink it, but this time the lab tech made me literally chug it. Needless to say, I felt extremely sick for about an hour after inhaling the sugary drink.

The place I did the test at was also horrible. It was literally freezing outside the day I did the test and there was zero heat in the waiting room. They also had wifi, but refused to give me the password; luckily I brought my laptop and a movie to watch, but it would’ve been a long three hours if I didn’t. The woman taking my blood also had zero idea where New Mexico was, or that it was even part of the United States. Fail, fail, fail. On the bright side, she was one of the best lab techs I’ve ever had and I barely even felt it when she stuck me all four times. But all of that aside, at least I passed!

Here are posts you should read if you need something to browse/pin over the weekend.

I’m super, ridiculously excited for family pictures this year! My friend, Brooke, from Brooke Ashley Photography recently moved from California to Georgia (she lived here when we lived here the last time, which is how we know each other), and she’s graciously coming over to our town to take our pictures! If you know anyone in the Savannah, GA, area definitely check out her work and get in touch with her!

These will be our maternity/family/Christmas (or New Years) pics, and I’m going with a gray, black, and red theme for our clothes.

This is the plan for right now at least. I’m still debating about my shoes. Should I go for the gray boots or maybe black ankle boots (if I can dig them out of my closet), or some red heels I have (but those shoes have a peep-toe, so the tights would show through). At least I have one version of this outfit ready to go! Now I just need to make me look somewhat pretty…and not look like a whale. I’m excited for Julia’s outfit, too. She’ll look adorable, and my husband will look hot.

I originally planned for this to go up yesterday morning, but then the hotel’s wifi went out (bummer, dude). Then I was going to post it when we got home yesterday, but traffic accidents (not us) and construction on the road delayed us by a couple hours and I was zonked by the time we got home. Then I was going to post it this morning, but I caught up with Grey’s and went shopping at Old Navy’s 50% off sale instead. So here I am, posting this at 8:30 pm on a Saturday while my husband and I watch old episodes of Alton Brown’s Good Eats (the Romancing the Bird episode, if you’re wondering) to get us in the mood for Thanksgiving.

I hope you all have a wonderful weekend 🙂