This year is winding down quickly, which means I need a new planner in my life STAT.

I’ve had an Erin Condren for the past three years, but I’m just not feeling it this time around. I think my money could be better spent elsewhere (hello Caramel Brulee Latte), and it’s a little too bulky to carry around with me every day. However, there are things I really like about it: I like the full calender spread, and I like a weekly view separated with each day. I don’t necessarily need a daily planner since I don’t have too many activities going on each day, but I do need to keep track of things. I like the stickers that come with the EC planner, but I honestly don’t use them. My favorite thing about the EC is the zippered compartment in the back. I LOVE it, but is that feature alone worth all the money? I think not.

A couple weeks ago I asked about planners on Facebook and got some excellent responses. These were the most popular planners mentioned (in case you’re in the market for a new one, too, and want to look into them a little further):

So which one did I get? None of the above, actually.

I liked them all, but either the price swayed me away from seriously considering them, or they just weren’t in a style/format that I liked. I was frustrated and internally freaking out over not having a planner for the new year, so I took myself out for a Starbucks drink and a Target run to clear my head.

And that’s where I found it—my new planner. Or I should say, my new planners, because I’m trying to decide between two of them now, and I just don’t know which to pick! 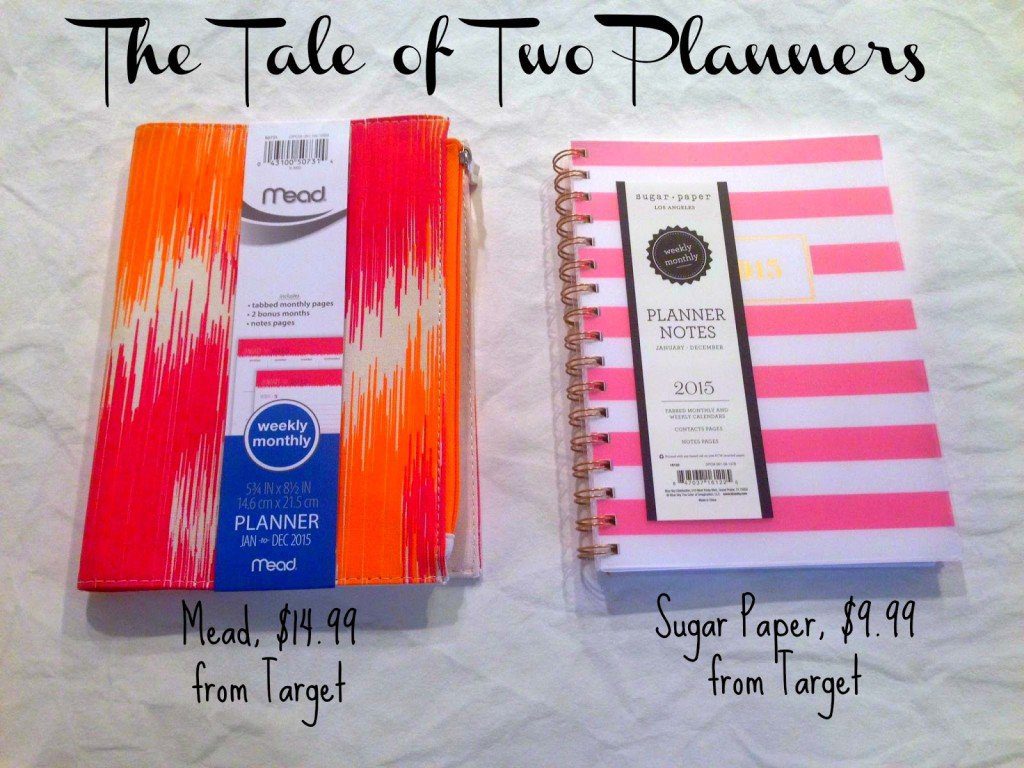 Here’s the first one:

(Mead from Target, $14.99)
Go figure that I’ve searched the Internet high and low and I can’t find this one online anywhere. (Talk about frustrating when you’re writing a whole post on planners and you can’t find it to link to.) It’s by Mead and it’s a weekly/monthly planner. They come in several different designs, and my favorite part is that the cover (which is canvas) also includes a zipper compartment. (I heard angels sing when I stumbled upon it…) It’s definitely not as big as any of the planners listed above (around 6″ x 9″), which is perfect since I can pop it into my purse and it won’t weigh my shoulder down. I have enough crap in there on a daily basis anyway. 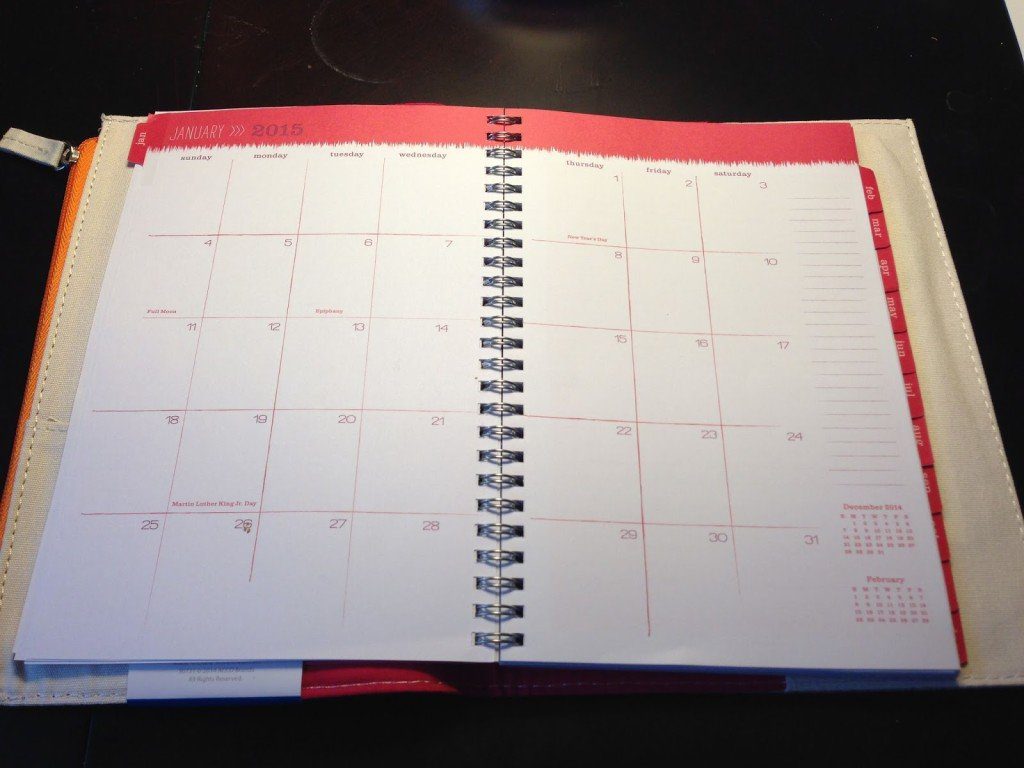 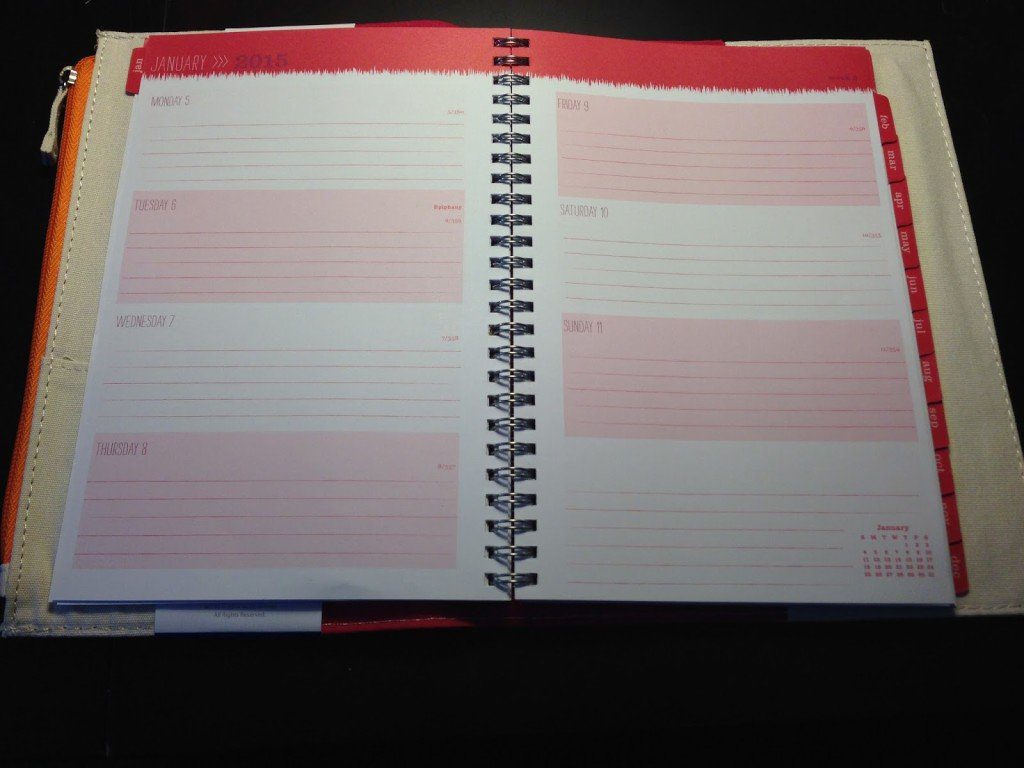 This one has: a monthly calender spread (over two pages), and each week has a two-page spread, as well. I love that this still has the monthly tabs and a place for a few pages of notes at the back, too. There’s also a “future planning” spread at the beginning, but it’s sort of stupid (and not worthy of a picture), and I don’t see myself using it. This particular planner starts with November and December (2014), so I could start using it today. 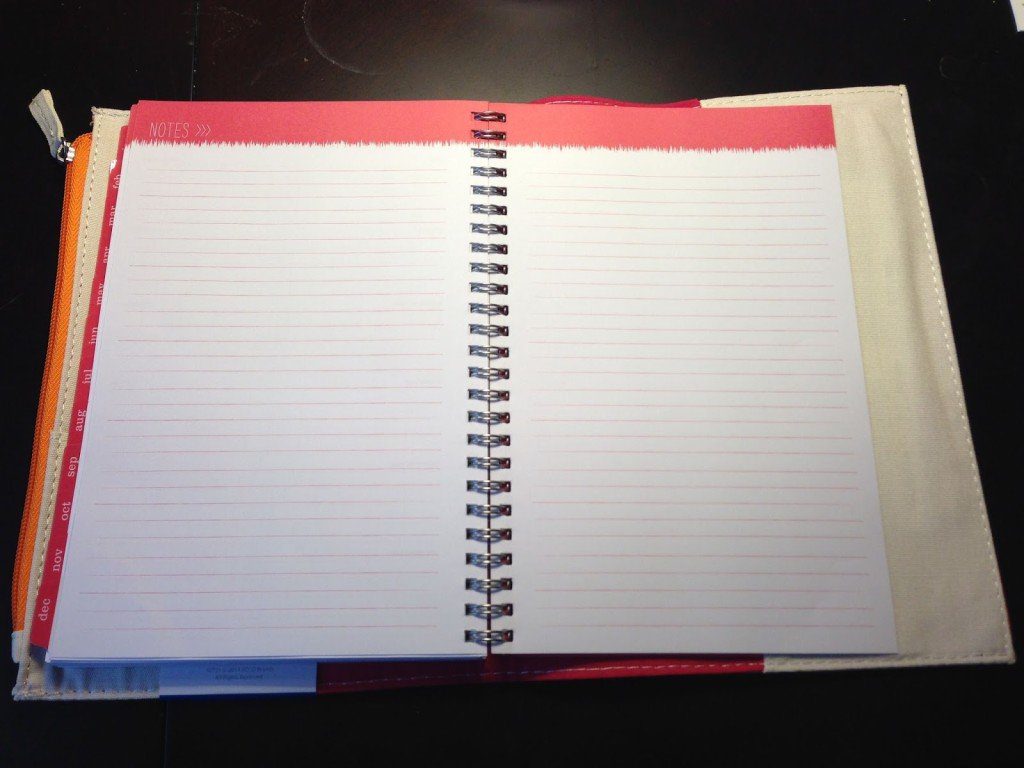 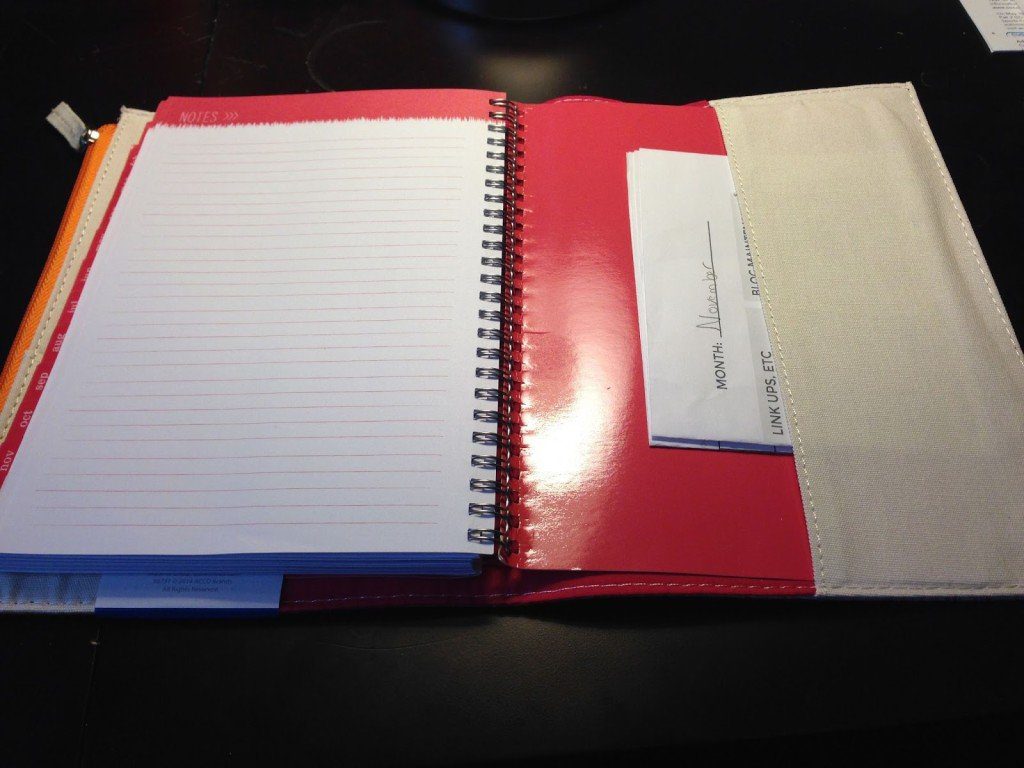 I used to keep my monthly blog plans from Freeborboleta in my EC “keep it together” folder, and this doesn’t have a folder, so I’ll need to figure out another place to store it. (Possibly inside the back cover?) But other than that, I’m thinking this could be a keeper.

And the second contender: 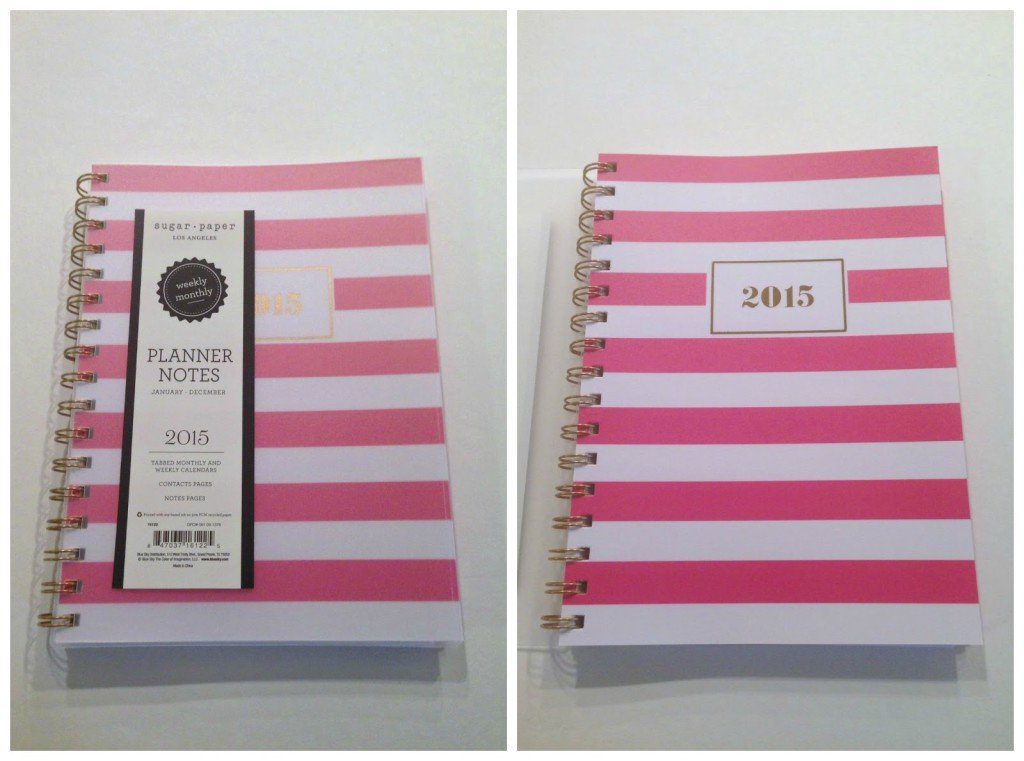 This one is more…how should I say it…trendy. I saw it a few days after I picked up the first planner (above), and it was on an end cap. The planner is by Sugar Paper, Los Angeles, and I’ve already seen a few blog posts about how they’re somewhat hard to get your hands on, because people are snatching them up so quickly.

Like the Mead planner, this one has a lot of similarities, but a few differences that could set it apart. I like that it has some info pages before the whole shebang actually gets started, though. It kicks off with some a year-at-a-glance, a quick reference page, and a couple contacts pages, which are both helpful. 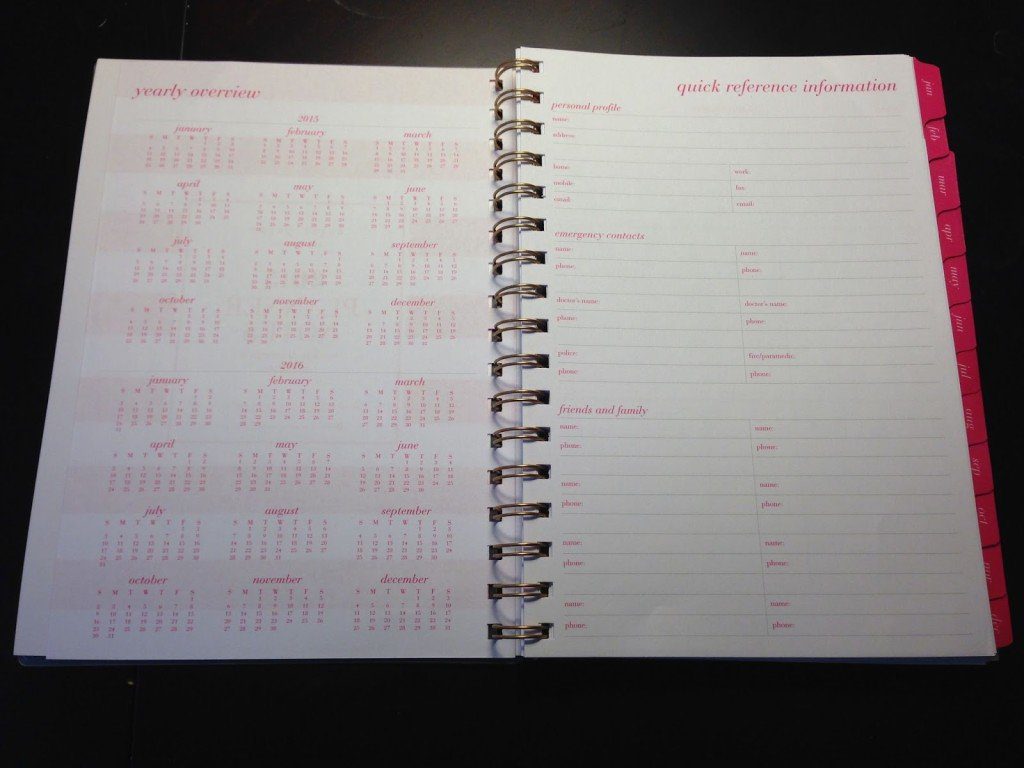 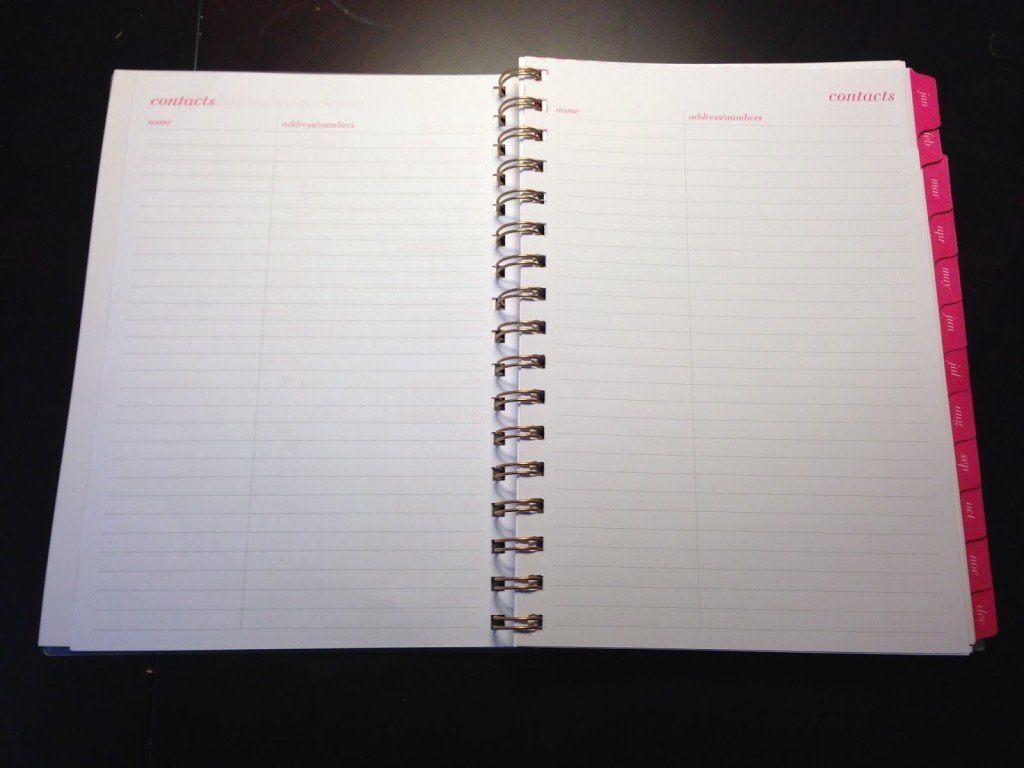 The rest of the planner includes monthly two-page spreads, weekly spreads, a lot of pages for notes and tabbed pages. BUT, it doesn’t have a folder or a zippered compartment. 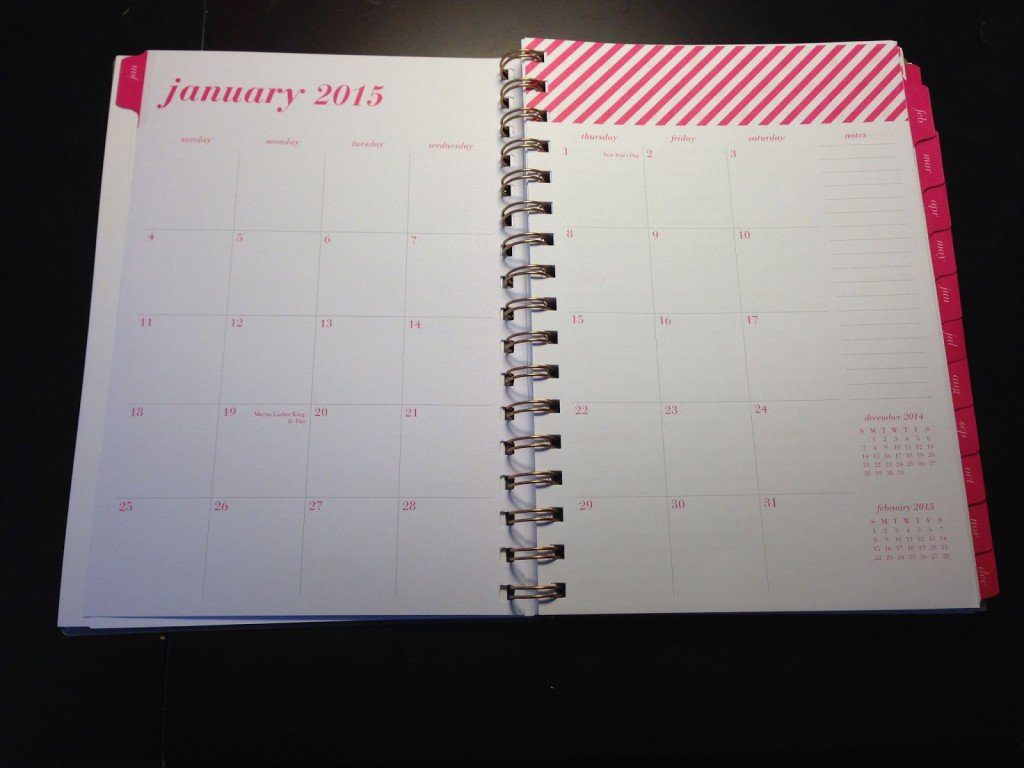 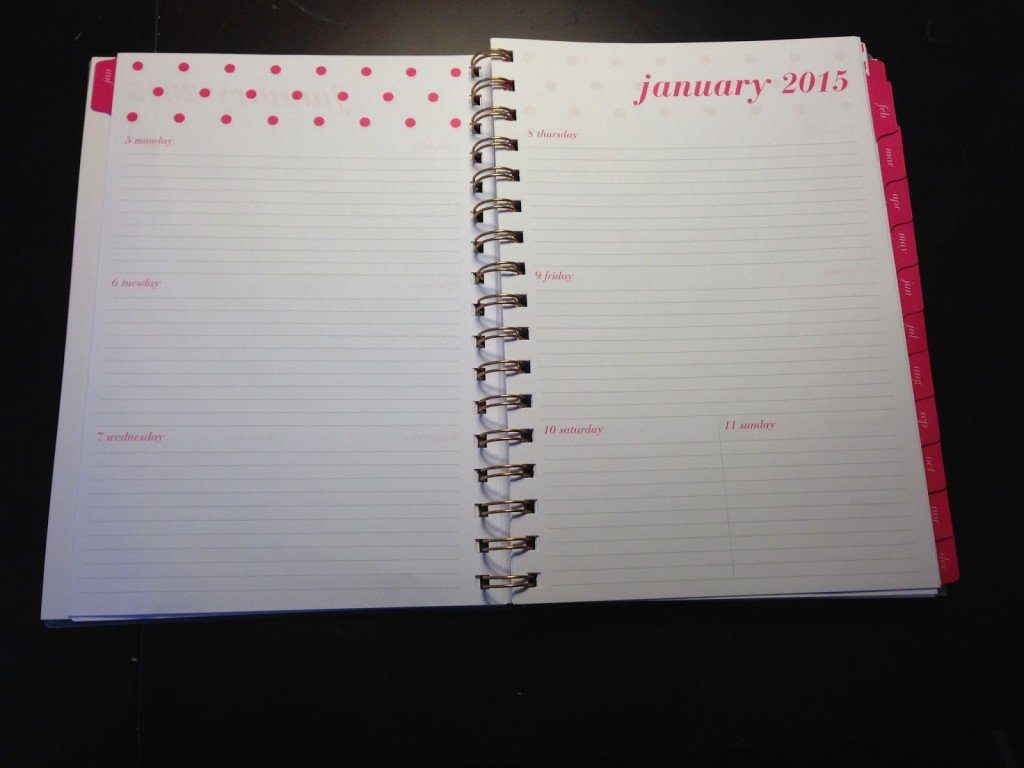 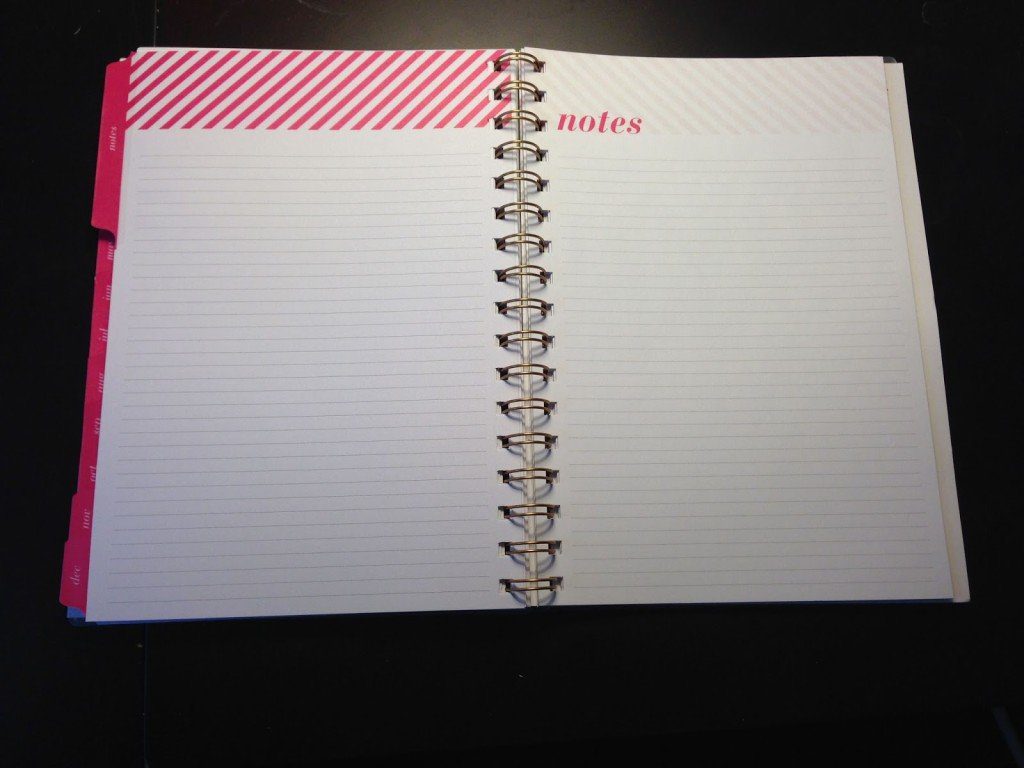 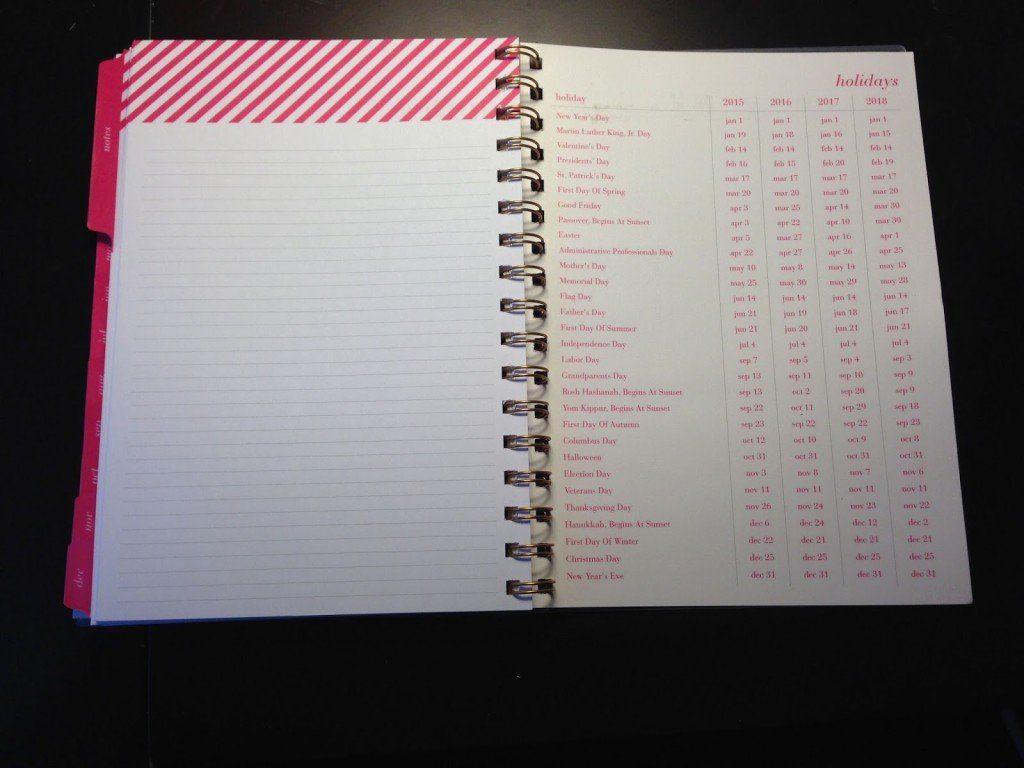 I should mention that the Sugar Paper planners come in several different sizes. Four, I think, but possibly five. (This is the same size as the Mead— 6″x9″.) I stood there thanking Jesus that my daughter was a sitter the day I stumbled on them, because I must’ve looked at each for about five minutes (which adds up in time, and any mom knows that you don’t have time to just linger in one place for that long if you have a kid with you). I also really like the covers (they also come in more designs than the one I’m showing here), because they’re modern, clean, and pretty.

Oh, and the price! This one was only $9.99, which is a complete score. But, it doesn’t have that darn zipper compartment. I’m so torn.

So there’s my planner dilemma. I’m trying to pick between the two and I have no idea which one will win. What I do know is that one of them is going back to Target sometime next week. Either way, both planners were under $15, and for that price I think they’re both awesome.

Are you searching for a new 2015 planner?
Which one do you have your eyes on?
(And while you’re leaving a comment,
tell me which one you’d keep if you were me!) 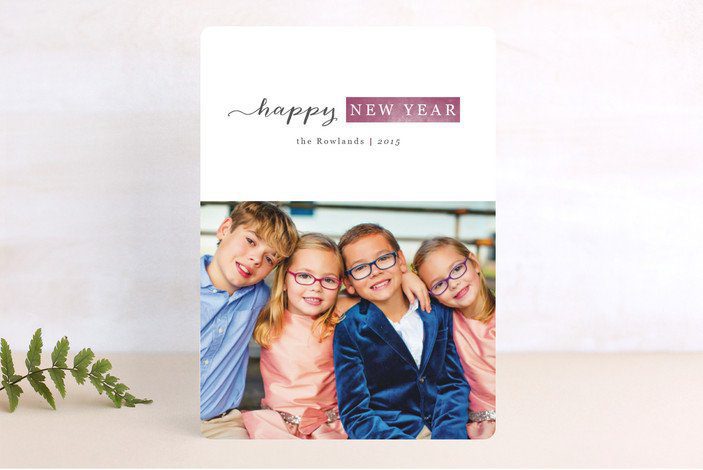 You guys, I’m notorious for procrastinating when it comes to sending out holiday cards. Early in our marriage we started sending them around New Years, which wasn’t horrible, but then… 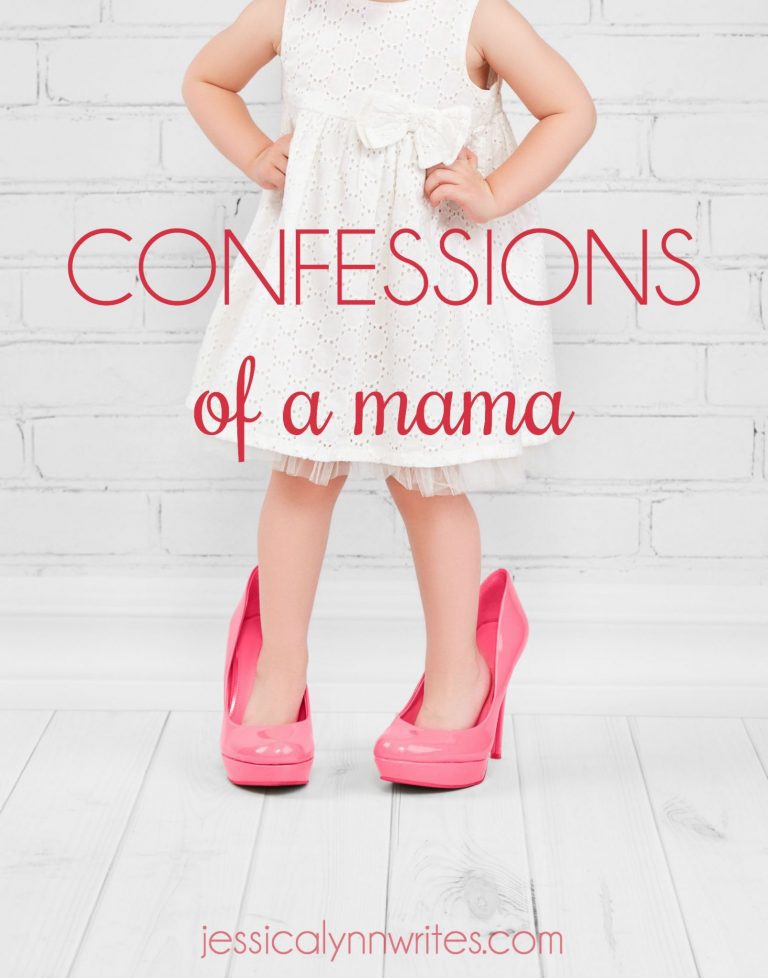 It’s time to get a few things off my chest, because my life is far from perfect. I actually think “Confessions of a Mama” would be a pretty fun series… 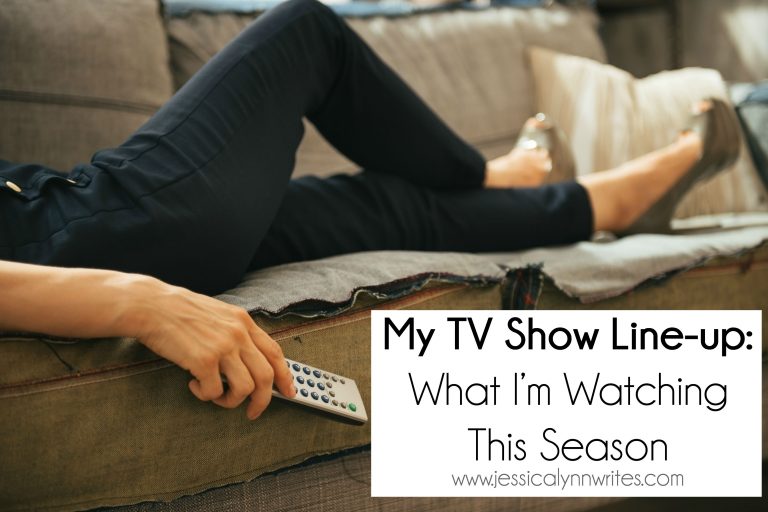 I’ve been waiting weeks—weeks—for this week to arrive, and it’s finally here: it’s time for new TV shows! The summer can be such a lull since there aren’t any new… 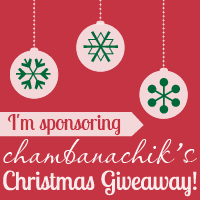 Because it’s Thursday and because it’s been ridiculously gloomy over here lately—buckets of rain just keep pouring down from the sky—I want to give something to you. Well, one of… 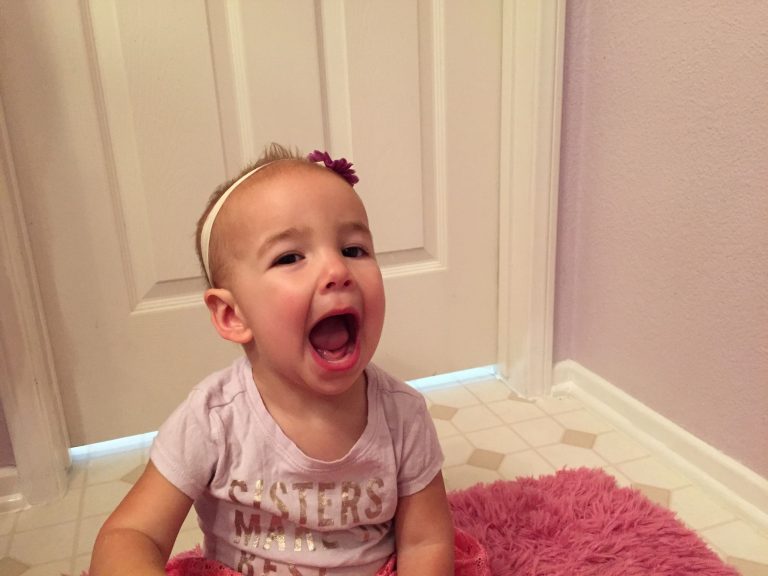 “Ah, finally.” Those are the two words I say every.single.time I see a brand spakin’ new razor sharp white tooth poke through my daughter’s swollen gums. It’s true what they…

Have you seen the dialect vlogs popping up around the blogosphere lately? Essentially, there’s a list of words to read and a set of questions to answer out loud, and…