Oh boy, this is certainly not a post I ever intended to write. My daughter—my newborn baby—and I just spent the past week on an unexpected “vacation.” Although, I use the vacay term very, very loosely, because spending night after night after night in a hospital is anything but a vacation. My heart seriously goes out to any parent who has had their child in a hospital for any amount of time. I also need to give a huge thank you to everyone who saw/heard what was going on and prayed, sent us messages, and/or offered to help us in any way. 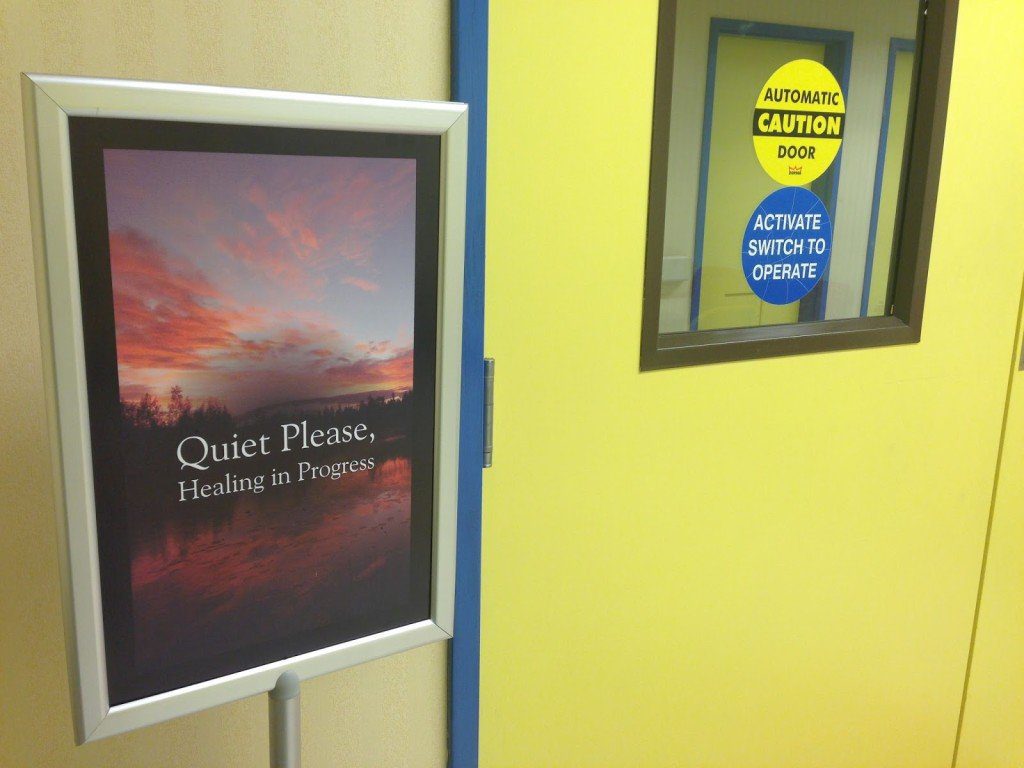 It all started last Saturday when she was a mere eight days old. Her breathing looked a little labored, like she was having some difficulty getting air in and out. I wasn’t too concerned, though, because she had been congested since day one, and babies typically breathe through their nose, so I figured she was just compensating for her stuffiness. We brought it up to everyone we saw (in the hospital before being discharged, and to her pediatrician), and they said it was normal for congestion to take over their little noses right after birth.

When I woke her up to nurse her on Sunday morning she felt warmer than normal. Figuring it was just swaddled up and super comfy all night, I left it at that. We were also doing her newborn photos that morning, and figured she was a little warmer since we bumped the heat all the way up in our house to keep her nice and comfy and sleepy. But a few hours later, she was just as warm, so we took her temp. We don’t have a rectal thermometer, but her underarm was registering in the low 99s. Before we left the hospital after she was born (and the pediatrician’s office for her three-day check), they said that we needed to take her in if her temp ever got up over 100 degrees, and since it wasn’t that high yet, we just continued to monitor her.

But then my mama gut got the best of me since her temp never really went back down, and it still looked like she was having a hard time breathing. We handed Julia off to my parents (who came into town the day before to help out and see the new baby) and took Maddie to our ped’s office after hours clinic.

They took her temp (rectally) and it registered at 100.8. Seconds after that number registered, the three doctors on staff practically all came in to asses her. My husband and I sat back and watched, feeling helpless while they tended to our baby. Before we knew it, they brought in a little oxygen tank and strapped a tiny mask to her face. Apparently, her oxygen numbers were in the 60s—normal is in the 90s or 100. I was too scared and nervous at this point to cry, but the tears started welling up.

Once they got her breathing somewhat stable, a tear started escaping my eye when one of the doctors came back and said that they wanted to admit her into the children’s hospital in the next town over (where I delivered). She proceeded to say that if her oxygen levels stabled over the next few minutes, they’d consider letting us drive there on our own, otherwise they’d call an ambulance to transport her.

Her levels didn’t bounce back up. An ambulance was requested, and before I knew it, my nine-day-old baby was in her car seat and being strapped to an ambulance bed, and I was stepping into an ambulance while my husband followed in our car. 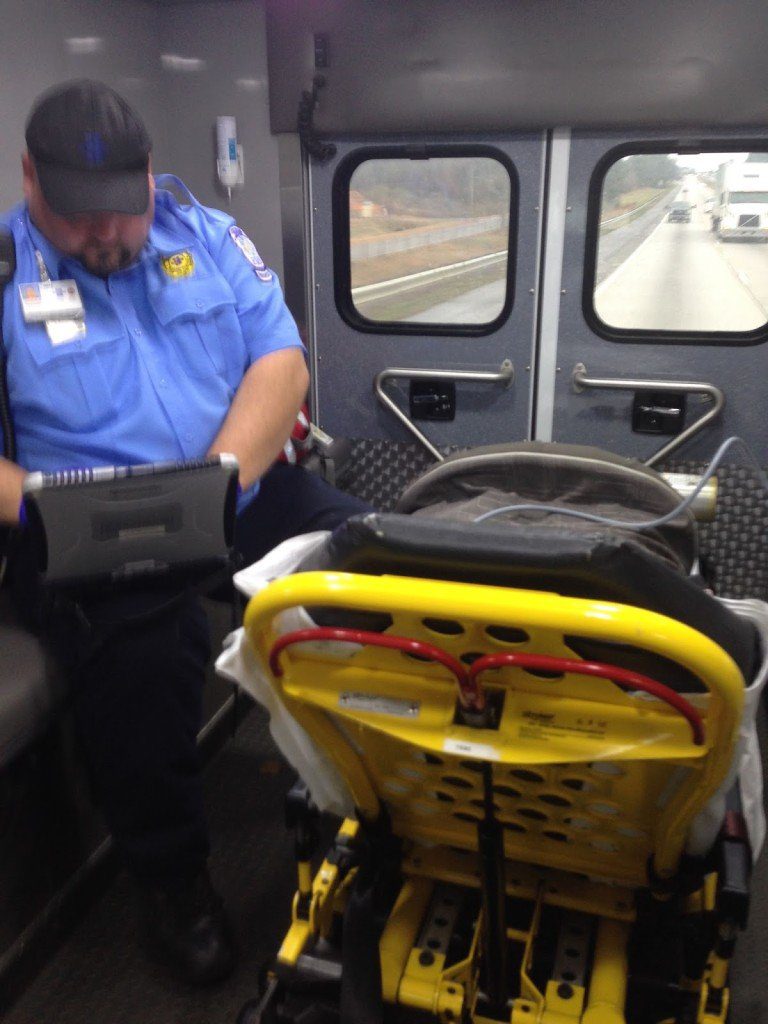 Once we got to the hospital, it was a whirlwind. They had a room waiting for us and there was a team of doctors and nurses ready for her. I should’ve taken a picture, but I was in a little bit of shock: six people were hovering over my little girl, all trying to do one thing or another to get her stable. They couldn’t get an IV, and ended up trying not once, not twice, but three times to get one in her head. I looked over at the wrong time and noticed her entire head was red…from blood. I lost it then and let the tears flow. It turns out that it’s hard to find a good vein on a baby, because her hands, arms, lets, and feet all have stick marks on them, too. They finally—finally—after an hour, got an IV in her on her foot. 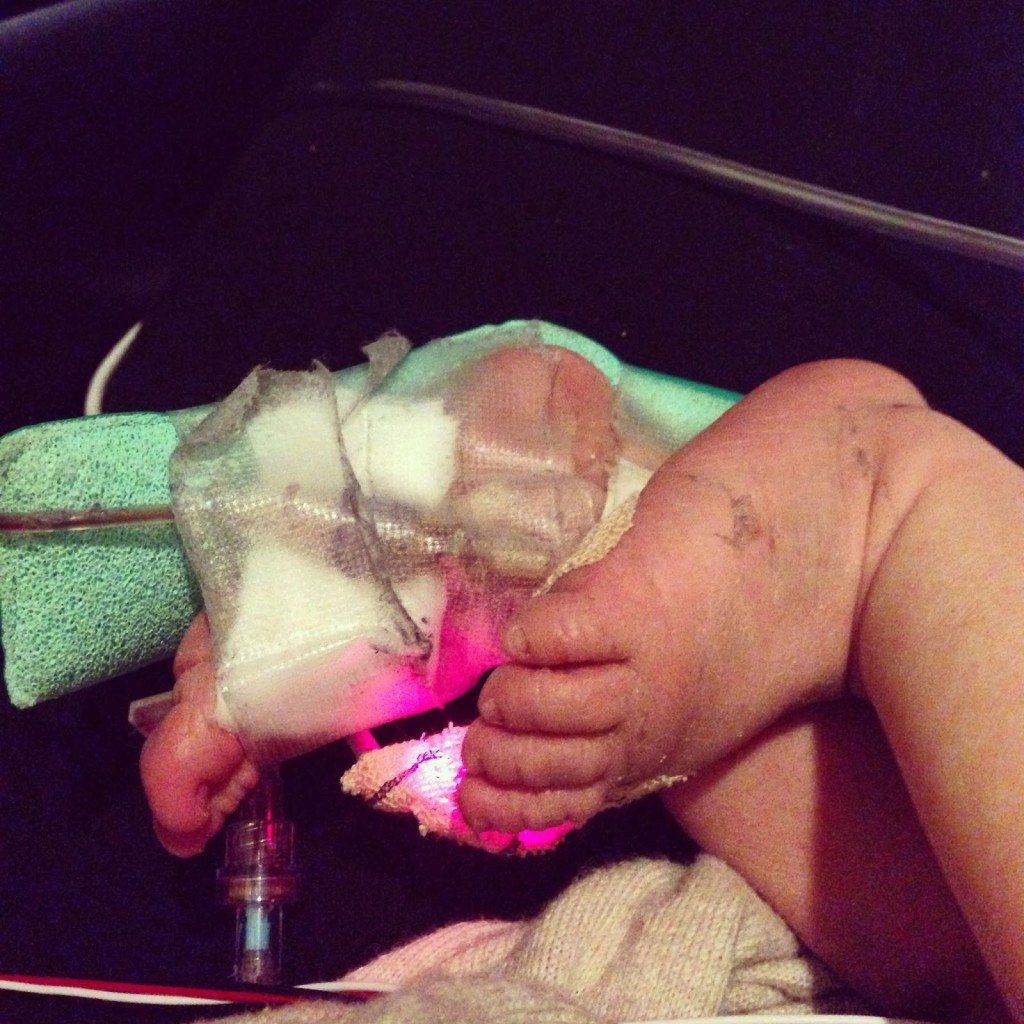 The main doctor on duty tried to keep me calm by explaining what was going on—they needed the IV so they could get blood and start running tests to figure out what was going on. But hearing your baby scream her head off with blood saturating her small little body, and when there are so many people surrounding her, it’s hard not to get worried and scared.

Thankfully, they finally got the IV in and the cultures they needed and the team of medical professionals in the room finally disappeared; all who were left were me, my husband, and Maddie. We changed her diaper and I kissed her blood-stained head, and rocked her. The doctor came back a little later to inform us that one of the tests came back positive: she officially had RSV (Respiratory Syncytial Virus), basically she had a baby cold.

Since she’s so little, though, and since she had only been in the world for such a short time (and even though we’re breastfeeding), she hadn’t had enough time to build antibodies. With a virus, antibiotics won’t work, so the only way to treat it is to monitor oxygen levels, suck out the congestion in her nose, and sometimes do extra breathing treatments. So, on Sunday (at nine days old), she got hooked up to some oxygen and started using an inhaler to open up her airways. 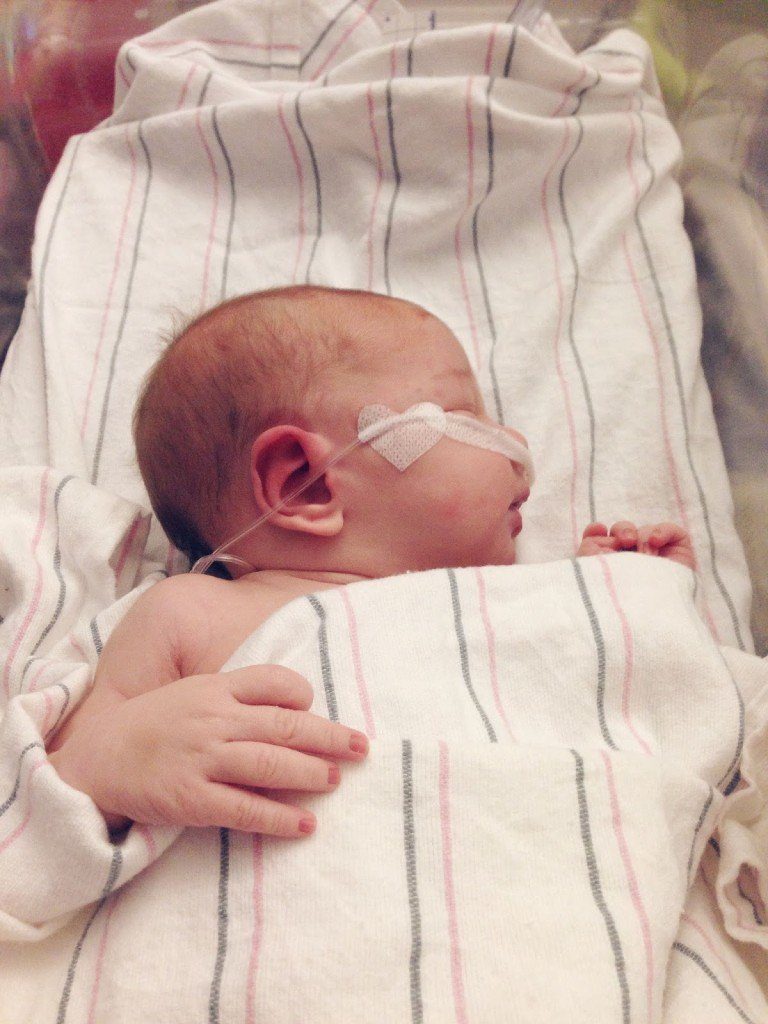 We were in the hospital for a week. I say “we,” because I stayed there with her the whole time, only venturing out for about a half hour at a time every couple days to go scrounge up some food. My husband and mom thankfully came over to keep me company and to see the baby. They were amazing. One of them would stay with Julia and the other would bring me breakfast or lunch and be up at the hospital keeping me and Madilyn company. Since I’m breastfeeding, and because we live 30 minutes from the hospital, it wasn’t feasible for me to go home. We also had no idea how long we’d have to stay.

RSV typically lasts 7-10 days and ebbs and flows. One of the first nurses I had told me she’d get better, then worse, then better again, and that the worst day is typically day five. We definitely dealt with the roller coaster aspect of RSV and it tested my patience greatly. It was hard to see her improving only to have her take two steps back the next day, because her lungs weren’t quite ready yet.

The hospital where we’re at wants babies to be off oxygen for a full 24 hours before they’ll send patients home. She made it around 15 hours the first time before we had to start the whole thing over again, because a trigger-happy nurse came in to restart it. (The doctors wanted to see if she could come back and breathe on her own before starting her on oxygen again, but they forgot to communicate that to the nurse techs on duty—hence my use of the phrase “trigger happy”.) I had to play Mama Bear while making sure everyone (the doctor, nurse, techs, etc.) were all on the same page, because there was a lot of conflicting info being tossed around from shift to shift. Luckily that method worked, and the next night she sailed through the night without needing a smidgen of O2, allowing us to go home the next day. 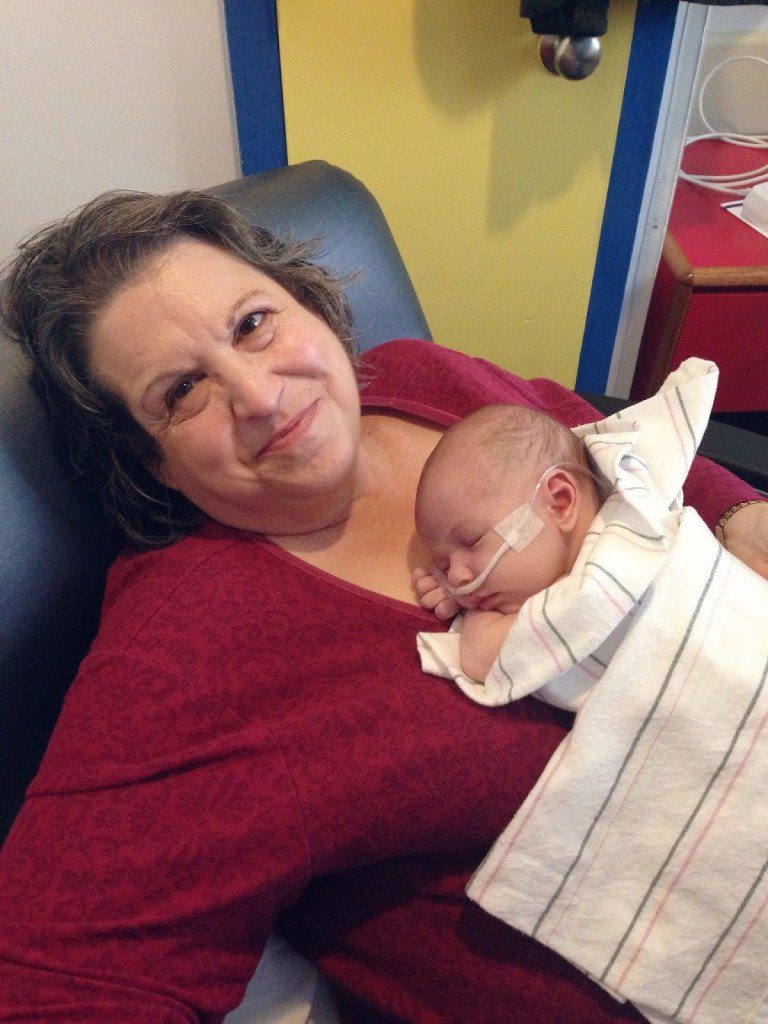 While it was the absolute last place I wanted to be with my newborn, I was a little thankful I had some serious one-on-one time with just her. With the exception of leaving updates on Facebook for family and friends, I stayed off the Internet (or browsed instead of being an active participant). I also focused on breastfeeding and tried to nap when I could. I missed Julia dearly, but I knew she was in good hands with my parents and my husband, and I saw her several times during that week. 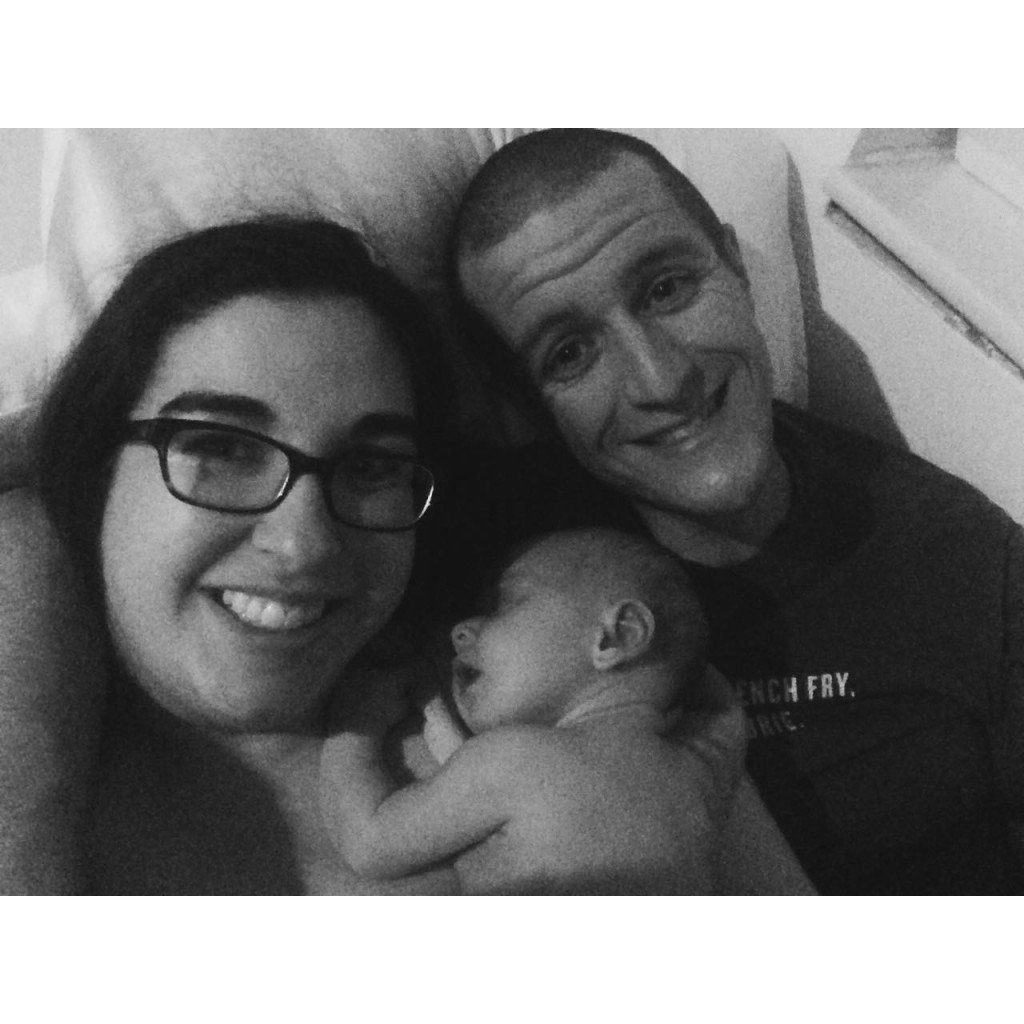 Maddie’s still on the mend (they said it’s like an adult cold where symptoms—like a cough—could linger for awhile), but she’s expected to make a full recovery. I’m just excited that we’re home now and can settle into our new life as a family of four.