Skip to content
Alternate title:
The Time I Accidentally Attended a Breastfeeding Support Group
(And why I Don’t Think I’ll go Back)

So there I was, enjoying a cup of coffee at a local cafe. I was fresh out of a well-baby check for my two-month old (an appointment where my newborn screamed her little head off after getting her first round of vaccines), and was “wearing” my little one, when someone came up to me from the room next door.

She noticed I was wearing Madilyn and wanted to see if I cloth diapered her. I told her that I didn’t, but she handed me an invitation to a cloth diapering event. “That’s cool,” I thought, and already decided in my mind that I wouldn’t be attending (not because we don’t cloth diapers, but because it was in the next town over and I just didn’t feel like it). I put the invitation in my purse and then she lingered around for a second too long. I could tell she had more to say, so I looked up at her. She asked me if I breastfed by chance. “By chance, I do!” I told her, and that’s when she invited me into a meeting currently going on—it was a La Leche League Breastfeeding Support Group. My ears perked up, because I’d actually been curious about attending one for awhile, but never got around to it.

The meeting was almost over, but she said it was okay if I popped in. So with my baby strapped to my chest, I packed up my things and went into my first breastfeeding support group. 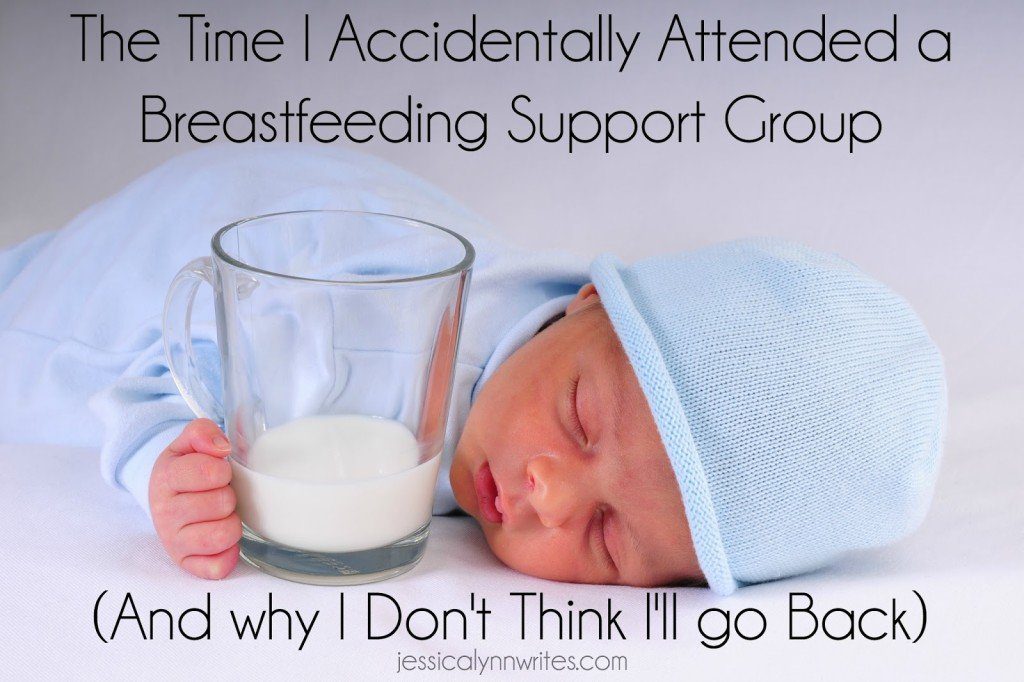 At first, things were cool. I introduced myself and shared a quick version of my breastfeeding history, and felt welcomed. I looked around and quickly realized it was a somewhat diverse group. There was someone asking about mastitis, another lady was nursing her newborn with a boppy, there were several women openly breastfeeding their little ones of all ages, and a few women wore their babies in cool carriers that I can’t afford quite yet. I felt welcomed…like these could be my people.

The hot topic of the meeting was about wearing a cover while breastfeeding in public. I personally don’t wear one (you can read about that here), but if others do, that’s cool. I was excited to hear what other women had to say about that topic since I know levels of comfort vary. It was positive at first and people offered suggestions on what to say if someone suggested you cover up while breastfeeding in public. But then the conversation got awkward.

Someone said (I kid you not, and I’m sorry for even writing this “out loud”) that she was at a pediatrician’s office and was breastfeeding her daughter in the lobby when someone sitting across from her (who was bottle feeding her child) asked her to cover up. Now, I get it; I’d be slightly annoyed if someone asked me to cover up, too, but what she said next was uncalled for, completely inappropriate, and utterly distasteful. The breastfeeding mom told this other women: “Well, I’m more offended that you’re putting a [insert type of sex toy here] in your child’s mouth.” Excuse me? Say what again? I didn’t even have time to get over the shock of what I just heard when the actual leader of the meeting said, “Yeah, I’m way more offended by bottle feeders than I am with seeing someone’s breast from breastfeeding in public.”

What just happened? Was that real life? I was in total shock!!!

First of all, how dare anyone equate a bottle to a sex toy? That’s completely and extremely irrational. Second, not that it matters in the slightest, but you don’t know that mom’s story or reason for not breastfeeding at all—it’s not anyone’s place to judge her. You don’t know that it’s not breast milk in the bottle. The baby may be adopted, or the mom may have tried and tried and tried her absolute hardest to breastfeed and just couldn’t. Or, you know what? She may not have wanted to even bother with breastfeeding, and that’s okay, because she’s the parent of her child and she’s the one making her own parenting decisions. Third, for it being a “support” group, that was the absolute least supportive thing I’ve probably ever heard. There were first-time moms there who may have been struggling—who were struggling from the conversation I heard when I walked in. Now if they ever contemplate or need to stop breastfeeding, there’s a really good chance they’ll feel even more guilty, and trust me, there is nothing like the guilt you feel as a mom when you don’t think you can provide the “most natural thing on earth” for your child. Been there, done that.

Moms: feed your baby however you want. Yes, scientifically speaking, breast is best, but you know what? It’s not the only way. Before I had my second baby I was mentally prepared to give up on breastfeeding. I wasn’t sure if I’d be able to handle going through what I did with my first, and for my sanity, we even had formula on hand just in case. And on top of feeding your baby however you want, please surround yourself with uplifting people who are positive and support your decision. There are too many things we’ll feel guilty for in our parenting season, and the trip down guilt lane shouldn’t start here.

I was honestly extremely ashamed to be a breastfeeding mom in that moment. There’s this whole “normalize breastfeeding” movement happening nowadays, but it can’t happen with the I’m-better-than-you stigma that some women have. Yeah, I’d be slightly upset if someone asked me to cover up, but there are a million and one other responses instead of what she said. And to be offended by bottle feeders? No way, jose. Without the bottle and formula, so many of us wouldn’t be here today.

Whew. So. That’s my story about how I accidentally attended my first (and last) breastfeeding support group. I just really hope I went to a fluke of a meeting and that there are other groups out there that are actually helpful, considerate of their members, and more uplifting than the one I attended. And if you bottle feed your child and have ever felt put down by a breastfeeding mama, I’m so sorry for your experience; not all of us think formula is the end of the world!