I lived a pretty normal childhood. I grew up in the same house, played at the same play grounds, went to the same schools just down the road from my home, and I grew up with the same friends I had since kindergarten. More importantly, I never moved; staying in one place was the only way of life I knew. Everything was consistent, and except for when my friends and I all split off to go our separate ways to college, I never experienced any big goodbyes.

But now things are vastly different. We move homes every few years, I have no idea what city, state, or country we’ll live in by the time the girls start school, and we’re constantly making new friends while simultaneously saying bye to people all the time. As a military family, my daughters are going to grow up with a completely different childhood than I experienced. My oldest daughter is only two and a half, but she’s already lived in two countries and two different states, but today she experienced something I didn’t have to deal with until I was a grown adult: she said bye to her best friend. The military often sends out short-notice orders, and that’s just what happened in this case. Her very first friend is moving up north, and I have no idea if the girls will ever see each other again. (In the Air-Force world we joke that it’s “a small Air Force,” because you usually end up getting stationed together at some point, but this family is Army, so things are different.)

I guess it’s a good thing we’ve been teaching Julia to say “See ya later,” instead of goodbye, because that’s what she told her friend today as we all parted ways.

Isa and Julia became instant BFF’s last year, and even though Julia understands that she’s moving away, I don’t think she actually comprehends that she’s not coming back, and that they won’t get to play ring-around-the-Rosie or hang out at play dates together anymore. As a parent, watching the last few times they played together practically broke my heart. A couple of weeks ago we received a few Snuggle Bears to celebrate National Teddy Bear Day this coming Wednesday, and from the second she saw the teddy bear, Julia’s been totally smitten with her new stuffed animal. She calls it “Snuggles,” and it’s her new favorite thing. She takes Snuggles on walks in her stroller, carries Snuggles with her in the car, and even tucks Snuggles into her bed during nap time. When I asked her who we should give the extra Snuggle Bear to, her eyes lit up, she broke out into her high-pitched squeal, and screeched out, “ISA!”

Snuggle sent us the bears to help spread #ShareABear—a movement to show the world that something as simple as giving a teddy bear to someone can completely brighten their day.

On the drive over to Isa’s house the other day, Julia kept repeating: “Isa moving. Isa can have my teddy bear. Isa will move with my teddy bear.” I love seeing how her thought process unfolds. Julia insisted that we wrap up the bear, so Isa could have a present to open, because according to Julia, “Presents are fun!” Knowing that she’d probably like to remember her friend she gets older, I filmed the girls’ interaction: 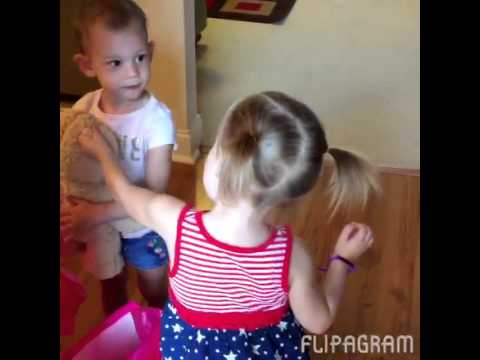 Seriously adorable, right? Isa had just returned from a trip, and while she was on vacation she got Julia a best-friend bracelet. I just about died when her mom told me about it. These first friendships are so genuine and real, and it’s breaking this mama’s heart!

Sharing is Caring with Snuggle Bear Snuggle is currently making the world a softer place by giving away 5,000 teddy bears to kids in need. But, since the Snuggle Bear can only spread the teddy-bear magic so far, they needs your help:

During the entire month of SeptemBEAR (see what I did there?), Snuggle’s asking you to share your favorite teddy bear memories through pictures, stories, and videos with the hashtag #ShareABear on social media.

[Tweet “This SeptemBEAR, @Snuggle_Bear is making the world a softer place by giving away 5,000 teddy bears! #ShareABear here:”]

I’d truly love to see your little ones and the #ShareABear that they decide to gift someone else, so if you put a picture or video online, please tag me (@jesstagirl) in it so I can see, too!

Have your little ones had to say “see ya later” to any of their friends yet?
Did they give them anything special before they went on their way?