Come in close, because I’m going to give you some real talk for just a minute: we haven’t made a big deal about Julia’s teeth brushing habits, and I’ve felt totally guilty about it. She brushes her teeth occasionally, but up until recently it hasn’t been part of any routine. Last month we decided to make a real effort to change that, so we started making brushing her teeth a top priority, and I came up with a few ways to make brushing teeth fun. (By the way, I fully recommend not starting a new routine right before you have a big life change—like moving—because then you have to make an even bigger effort to keep it up while you’re int the midst of the change!)

Honestly, I think it was harder for me to make it a routine than it was for her—she was totally on board from the beginning. Whenever we get the toothbrush out, she (literally) jumps at the opportunity to brush ’em. As part of the Orajel™ Smilehood community – a group of moms promoting healthy smiles and oral hygiene, I’m excited to share tips, tricks, and our personal experiences relating to teething. If you missed my last post, I talked about tips to help a teething baby, but now I’m here to talk about different ways to make teeth brushing fun for your toddler! 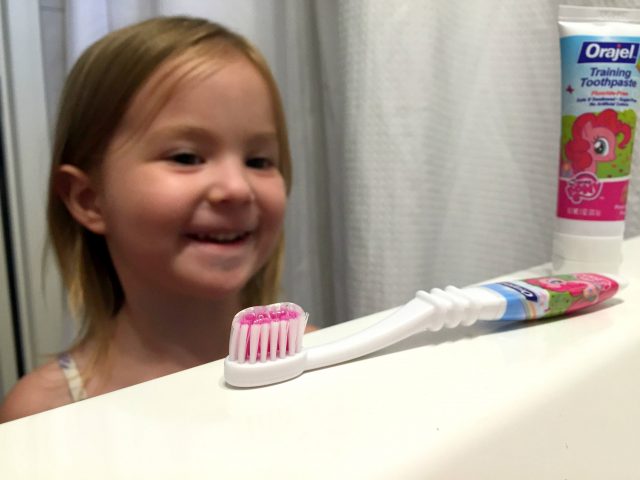 I don’t know about your toddler, but my little girl can’t wait to grow up and be a “big girl.” She sees me put deodorant on in the morning and asks for some, too. She calls my chap stick “lip gloss,” and then attempts to smear it across her face. And whenever she sees me brushing my teeth she begs me to let her brush hers, too.

Our little ones are so impressionable at this age that they follow and do whatever we do, and brushing our teeth is no exception. When she brings her brush over, we usually show her what we’re doing, and then do it once for her on her teeth, then we set her loose and let her mimic us. 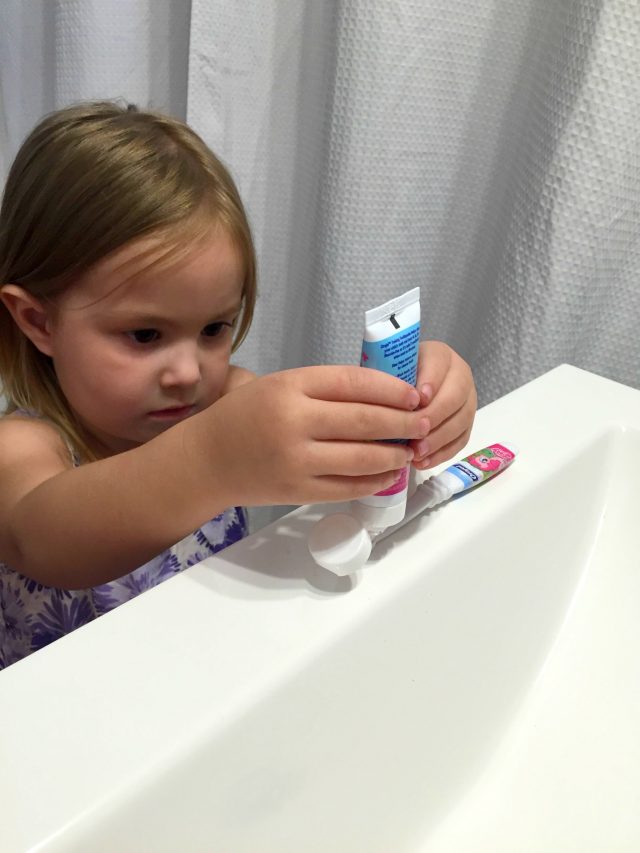 Sometimes it’s hard to let them grow up, but there’s a certain point—around two or two and a half—where they start wanting to do everything all by themselves. And honestly, it’s hard to relinquish that control, but as a mom you know you have to let go at some point. For a little while we were kind of hiding Julia’s toothbrush, because I didn’t want her playing with it (or didn’t want her putting it somewhere and having it get all gross), but then when she started imitating us, we realized she could do it herself.

Her brush now lives within arms reach by her sink, and she will get it and bring it into our bathroom where we’ll all brush our teeth together. I’ve even let her start putting the toothpaste on all by herself.  I know she feels grown up by getting her brush, rinsing it with water, brushing, and then “spitting” (i.e. drooling) it out after.

Check out this video of her doing it all by herself, and being a good role model for her sister at the same time. 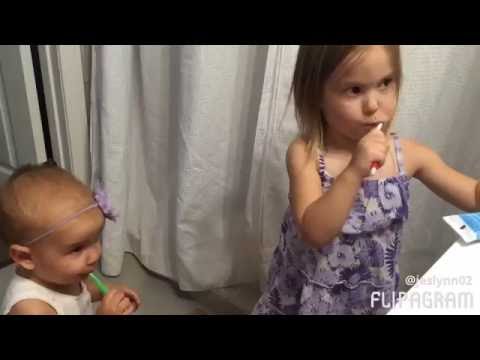 Julia has a slight obsession with Paw Patrol, and recently, My Little Pony, so the fact that her tooth brushes have those characters on them makes her want to use it more often. She got a huge kick out of picking them out herself. Actually, I’m pretty sure this is one of Julia’s favorite reasons for brushing her teeth. It also helps keep the toothbrushes separate; Maddie’s brush has Elmo on it, so Julia knows not to use that one. 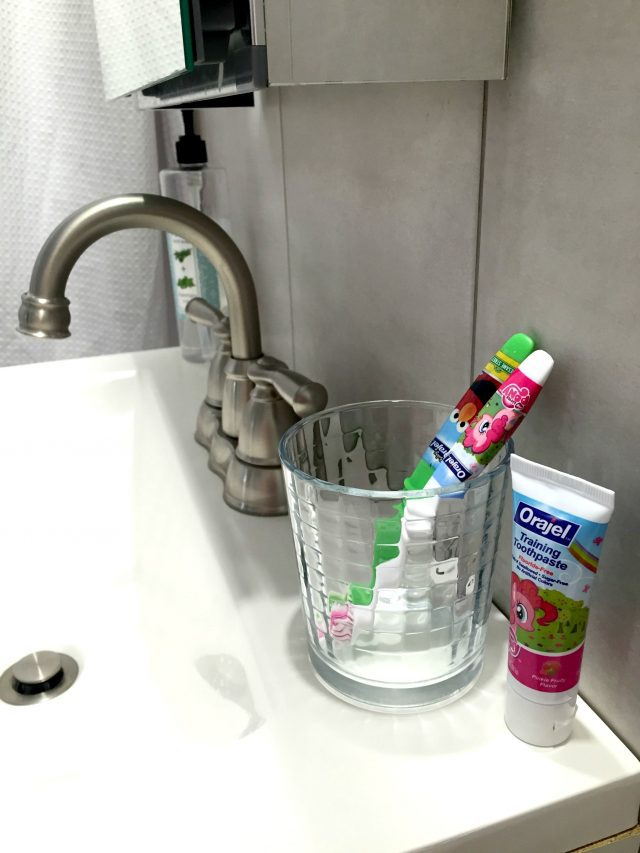 Since Julia actually enjoys brushing her teeth we haven’t had to do this, but I’ve heard singing a silly song works wonders on some kids, because it makes the act of brushing fun and game-like. It’s recommended that you brush your teeth for a full two minutes, which is basically an eternity for little kids, but if you have a song playing, that time will go by much faster. We listen to a toddler station on Pandora and this song by Raffi Raffi always comes on, and Julia gets a kick out of it. It’s not quite two minutes, but it can make that minute and a half go by pretty fast.

In order to make better habits (for myself and for Julia), we’re planning on using a sticker chart to keep us accountable for both morning and nighttime brushing once we get settled in California. Girlfriend is in love with stickers, so I know she’ll love this idea. Except for that first month when I was a new mom, I absolutely always brush my teeth in the morning. Brushing at night, on the other hand, is a challenge for me, so this will be a good challenge for me, too. It kind of goes back to the first tip about being the example. I want her to know that sometimes I need to learn new things, too! 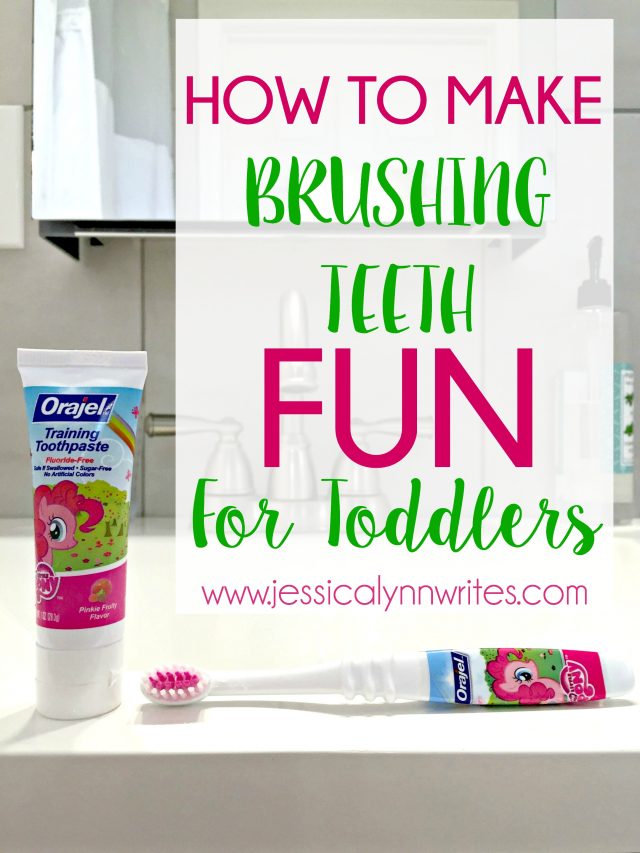 I’d love to hear about your toddler’s teeth brushing habits and how you make it fun for them!

This post is sponsored by Orajel but all opinions are my own.