Tortillas are a staple in our home; they always have been, and they always will. Which is why this New Mexico tortilla recipe is so special…and downright delicious!

I know “storytelling” is frowned upon with recipes, but hear me out with this one, because it makes these New Mexican tortillas even more special.

When I was younger—much, much younger—I remember standing on my tippy-toes on a yellow stool out in Tome, New Mexico, watching my Nana and Tia make homemade flour tortillas.

I was amazed that these small, but mighty women. They’d toss some flour out onto their counter, and then they’d knead and roll out dough with such intensity with their tiny hands.

Their process was like a dance; perfectly practiced over decades and executed with precision and ease.

I also distinctly remember never seeing a recipe in sight (a hard concept to grasp since I sometimes have to quadruple-check the directions on how to boil water. Kidding. Kinda).

The following is what my mom and aunts use to make homemade flour tortillas. I’m certain my aunts got their recipe from my Nana after watching her make and creating them alongside her.

They’re legit and so, so, so delicious. 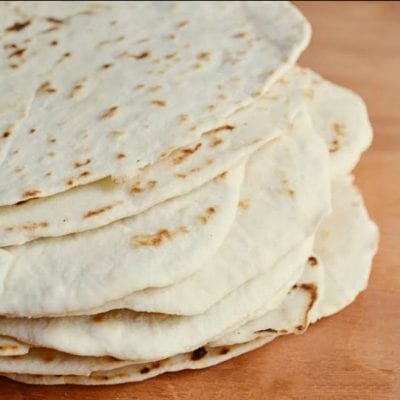 My Nana and Tia always had homemade New Mexican tortillas on hand; no matter what time we’d visit their house it was a given that fresh tortillas would be there for us.

And whenever we went on vacation they’d give my dad a dozen or so to take with him so we could have tortillas, no matter where we were around the world.

Y’all, we even buried him with some of his beloved tortillas. Crazy, I know, but it’s true.

When my dad was going through chemo a decade ago, he lost his sense of appetite, big time, and certain foods made him really sick, but tortillas were something he always enjoyed eating.

My mom jokes that when she made them they come out looking like the shape of the United States instead of a circle.

But honestly, that’s what makes them homemade! It doesn’t matter their shape—they still taste delicious.

The most important ingredient for this new Mexican tortilla recipe

Fair warning: there’s one “ingredient” that’s not mentioned, but absolutely necessary. This is going to sound completely cheesy, but I swear it’s true.

You have to make these when you’re in a good mood because they need to be made with love. We make these quite often, and any time we make them and we’re just not in the best mood, they come out different (and not a good different).

We’ve learned to only make these when we’re really feeling the love. Trust me on this and really put your heart into making them.

What to do with your homemade flour tortillas

We don’t just make one batch when we make these. Nope. We double or triple it and then keep the extras Ziploced in the fridge.

They’re delicious to eat plain, or you can use them to make a burrito, dunk it in taco soup, or scoop up some enchiladas.

There’s really no wrong way to eat a tortilla.

Have you tried these yet?

If you try your hand at making these homemade New Mexico flour tortillas, let me know!