One of the things I was most excited about when I found out we were moving to California was planning an outing to go whale watching in San Diego. Whale watching has always been at the top of my bucket list, but I figured I’d have to either go south to Mexico or way up north to Alaska to see them. So the fact that they’re practically in our backyard now is ridiculously exciting. 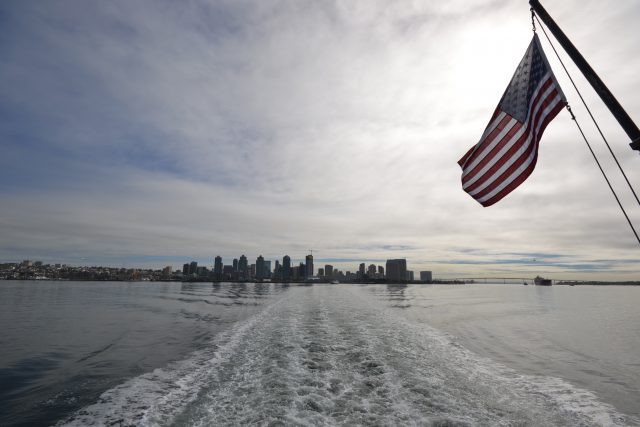 I’ve gotta start by giving a huge shout out to Hornblower Cruises and Events for working with me for this post; we really appreciate the tickets and the wonderful experience. I picked Hornblower as the company I wanted to go with for whale watching in San Diego, because I heard wonderful things about their tours. 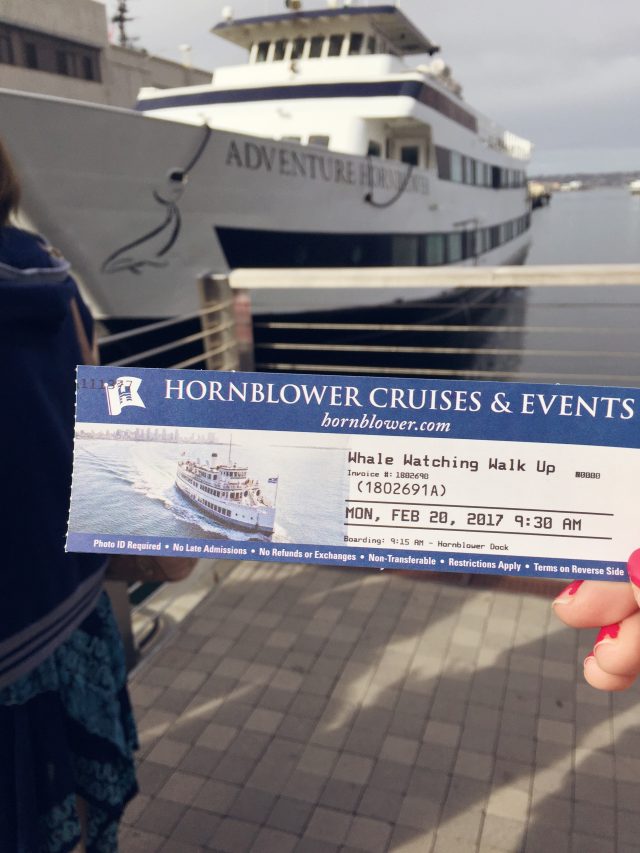 But what really sold me is that they offer a “whale check” in case you don’t see any whales. You’ll get a voucher to go on another Whale Watching Cruise or a one or two-hour harbor cruise around San Diego. I think that’s just a really kind gesture. They also offer dining cruises around the bay, and as much as I want to do that sometime, seeing whales was higher on my list of priorities. 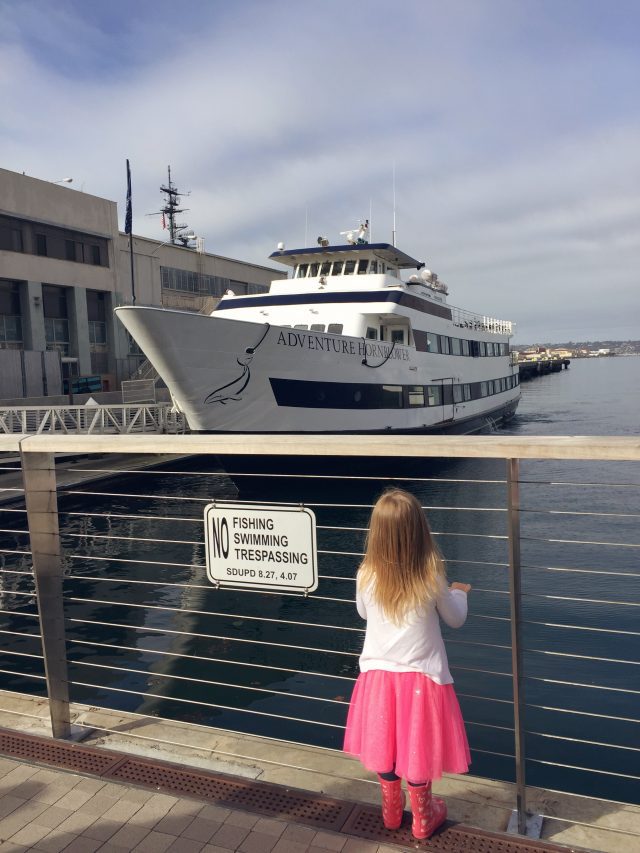 Hornblower allows any age on their boats, but we made the executive decision to leave our little one (2 years old) at home…and it was the best decision ever. She would’ve enjoyed it, but we would’ve spent all of our time chasing her around. If you want to take a rambunctious toddler, then I suggest bringing a carrier or strapping them in a stroller (although, that wouldn’t have worked for our youngest since she would’ve wanted to see the action). The boat can be very rocky at times, it’s a fairly long tour (for a tiny tot), and you have to be patient when you watch for the whales to emerge; typically those things are recipes for disasters with little ones.

Julia (4 years old) did great on the excursion. I think she was just around the perfect age to sit and wait, and then be excited when she’d see a whale. (She kept laughing, thinking that the whale’s butt was coming out of the water. Oh, kids!) 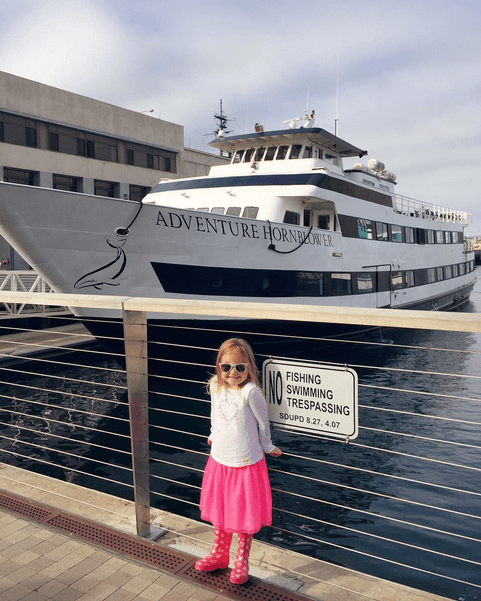 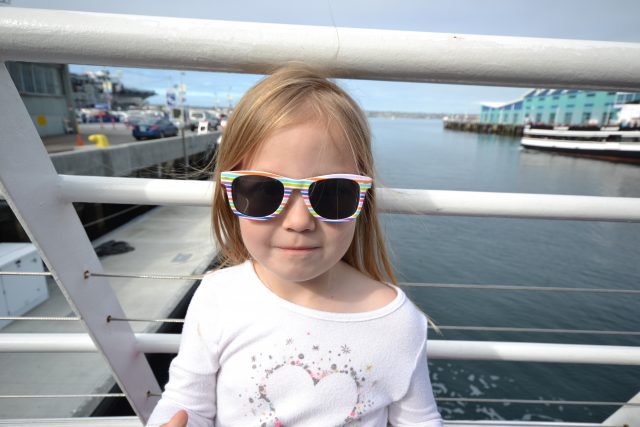 We picked the morning time slot for our tour, because it’s cooler in the morning; I like doing as much as possible before it warms up in the afternoon, and warm up it did. Even though we went out to sea in February, and it was cool and overcast when we left the port, it was very sunny and in the 80s when we were actually out there. 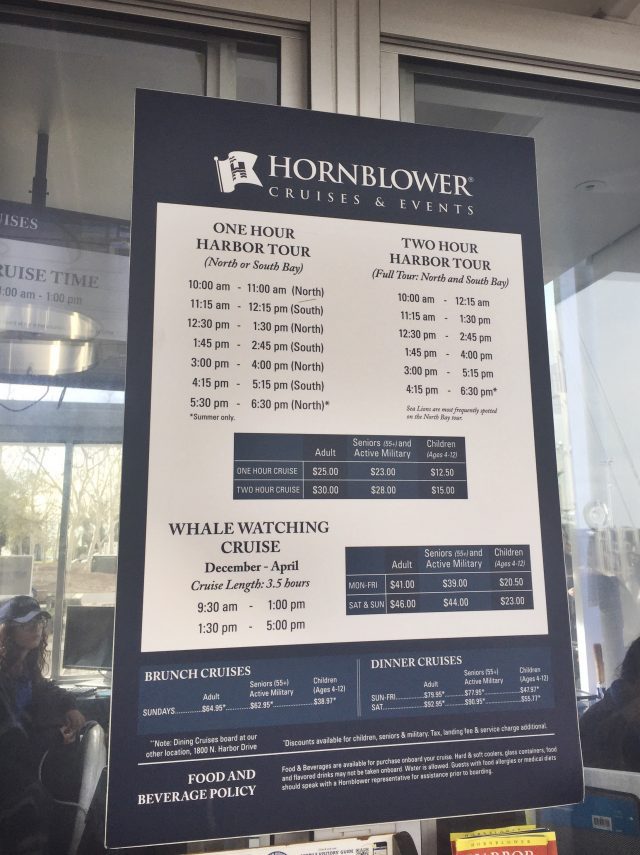 Also, I mentioned that the boat was rocky, so if you get motion sick bring some medicine or take something before you board! My husband had to grab a handy puke bag because of how rocky it was. And I would’ve taken pictures of the snack bar they have on board, but there was a little boy not feeling well at the time I was there, so I skedaddled out of that area. 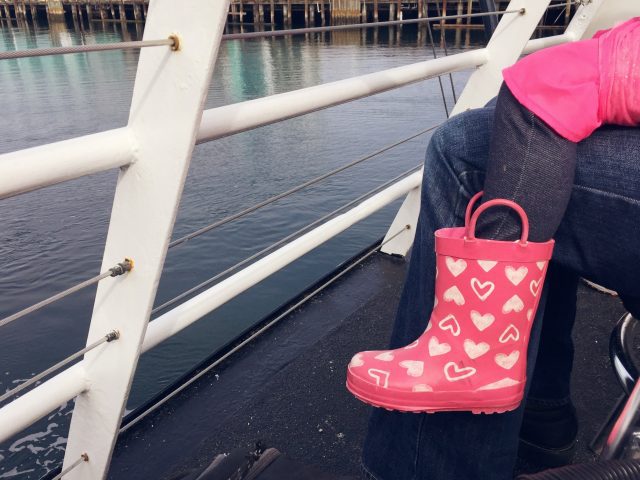 You are out on the open water, so some days may be better than others; on our particular morning at sea the swells were on the moderate side of things, so it made for a little more rocky than usual. Hold your little ones if you bring them with you!

But enough of the details…let’s get to the whales!!

I was so worried we weren’t going to see any. Obviously these are wild animals, so it’s not like you can just pinpoint a place to meet them! The captain and first officer explained that they’d keep an eye out for signs of whales in the area—you can see when they come up for air, it kind of looks like a puff of smoke. Just as we got out past the bay and into the open water, they said they thought they saw some whales, so we (they) started chasing after them…keeping a safe distance, of course. 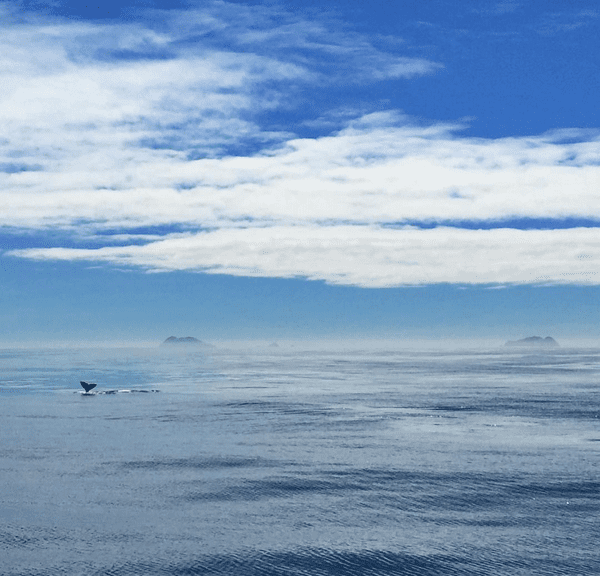 Everyone scurried over to the side where they were spotted, and then we watched and waited. Sometimes whales will dive down for around nine minutes, so it was pretty unpredictable. 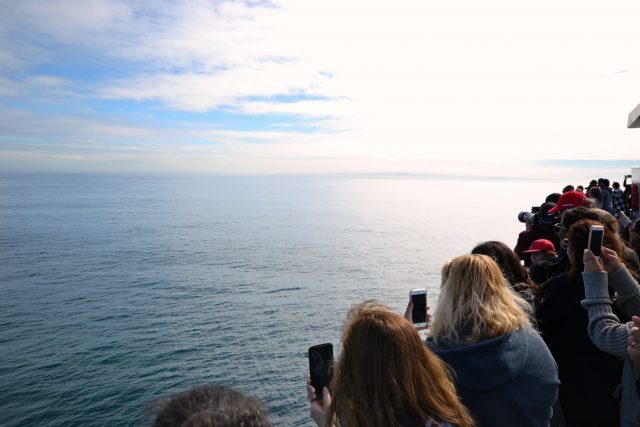 Luckily, the whales felt like putting on a show for us, because they kept “breaching” (jumping out of the water) pretty often. The captain was extremely impressed that we kept seeing them breach as much as we did. 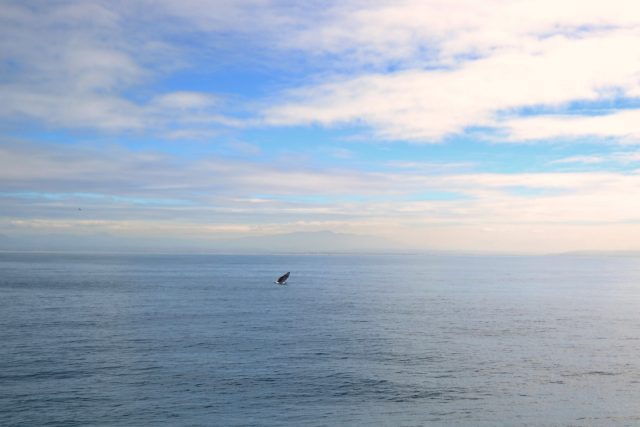 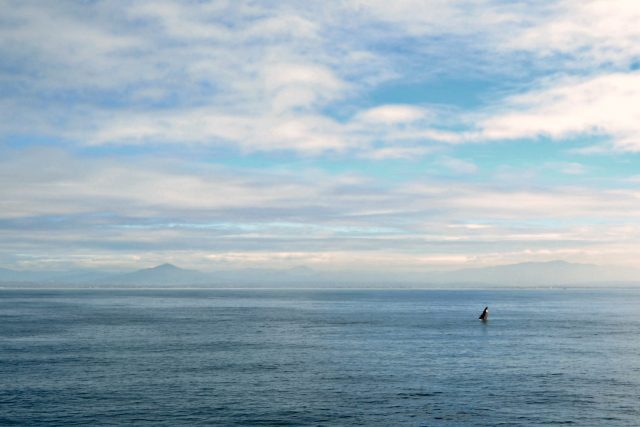 See the video below to watch them breach!

Watching these gigantic, magnificent creatures was astonishing. We were quite a distance from them, but  you could still tell how huge these whales are. Plus, the excitement radiated throughout the boat every time a whale was spotted. The captain said he even thought there was a mom with a calf, and that a couple of the whales may have been mating. Talk about rocking the boat! 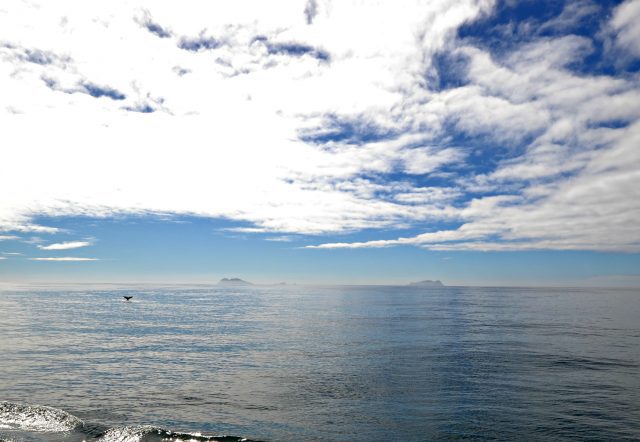 According to the captain’s log (aka the Whale Watching Report), “It was a beautiful morning with moderate swells. It was an exciting trip where we saw eight Gray Whales with lots of breaching, spy hopping, and some mating behavior. We also saw Common Dolphins and Pacific White Sided Dolphins. It was a very special morning!”

We also saw some sea lions lounging on the marker buoys out along the bay. Julia got a kick out of seeing them. 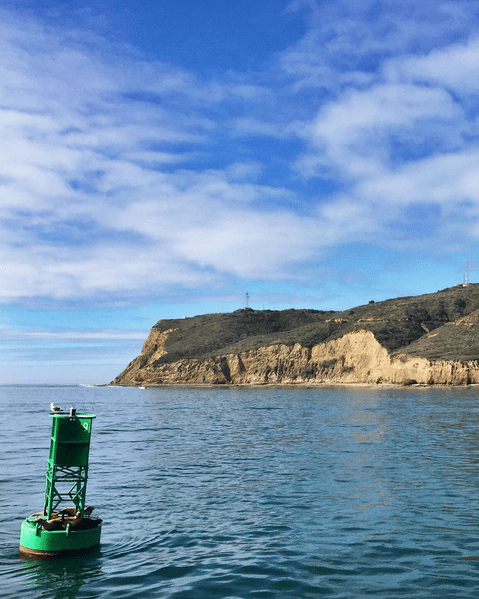 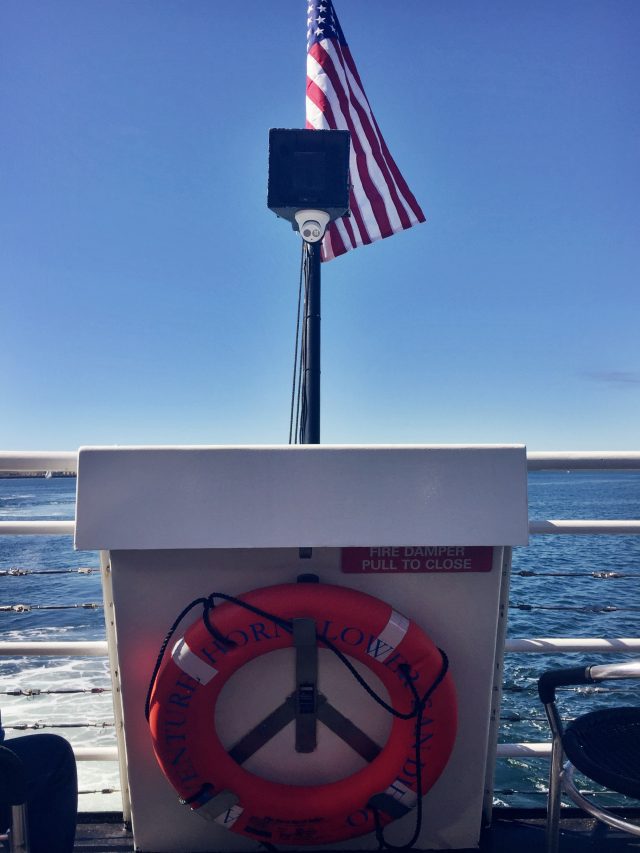 Whale Watching in San Diego: What to Bring

I think it’s safe to say that we highly enjoyed our whale watching experience. I was so worried that we wouldn’t see anything, and I know we’re lucky that wasn’t the case. The whole trip totally wore us out, so keep that in mind if you go. My daughter—who stopped napping several months ago fell asleep the second she go strapped into her car seat, and then continued sleeping for two more hours when we got home. My husband and I also took advantage of nap time; it’s crazy how a day at sea can wear you out. 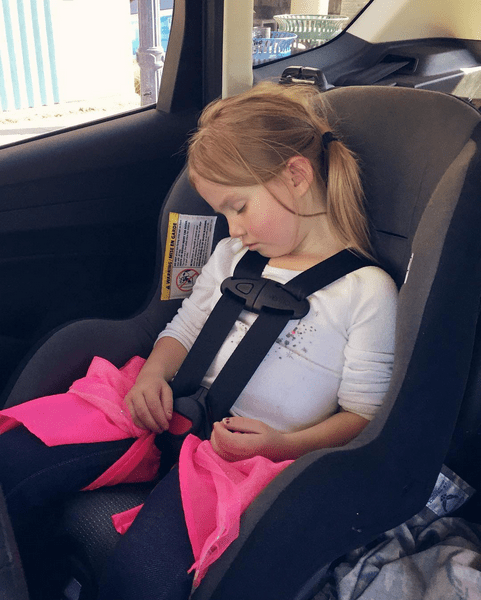 If you ever have the chance to go whale watching in San Diego, do it. It was exhilarating, and could be a once-in-a-lifetime opportunity! 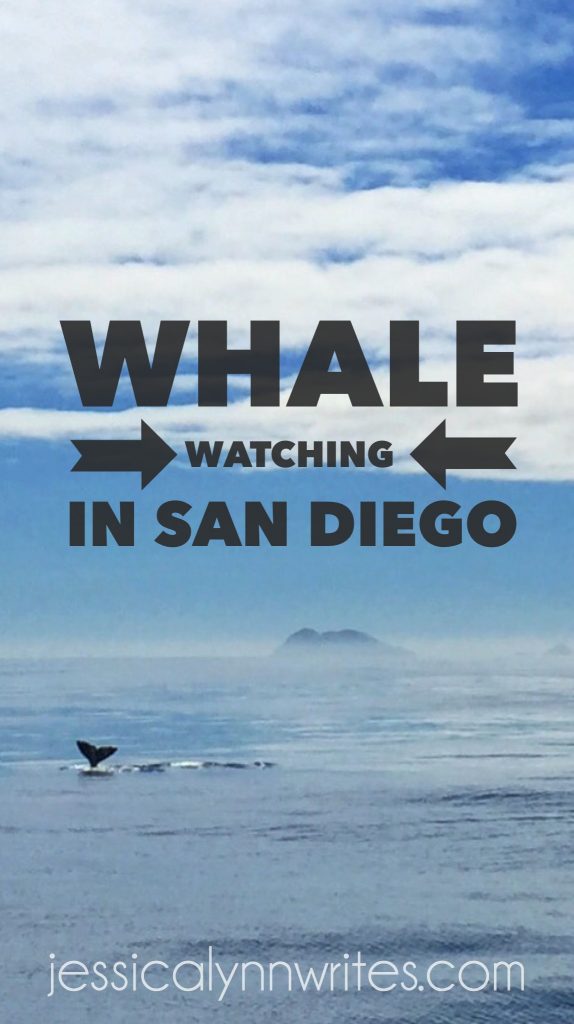 Special thanks to Hornblower Cruises for providing my family with the whale-watching tour. I can’t wait to hop on a dinner cruise next time!

Have you been whale watching before? I’d love to hear about your experience!