I was sold on visiting the Donut Bar in San Diego before we even arrived in California. I mean, any place that claims they have the best donuts in the world needs to be taste tested, right? So naturally, it took a spot on my San Diego bucket list, and I couldn’t wait to try it. We attempted to go a few other times this past year, but because I heard they run out of donuts if you get there too late, and since we live a little too far north to make it there before mid-morning, we always skipped it.

This time, though, I planned it out. Or so I thought. 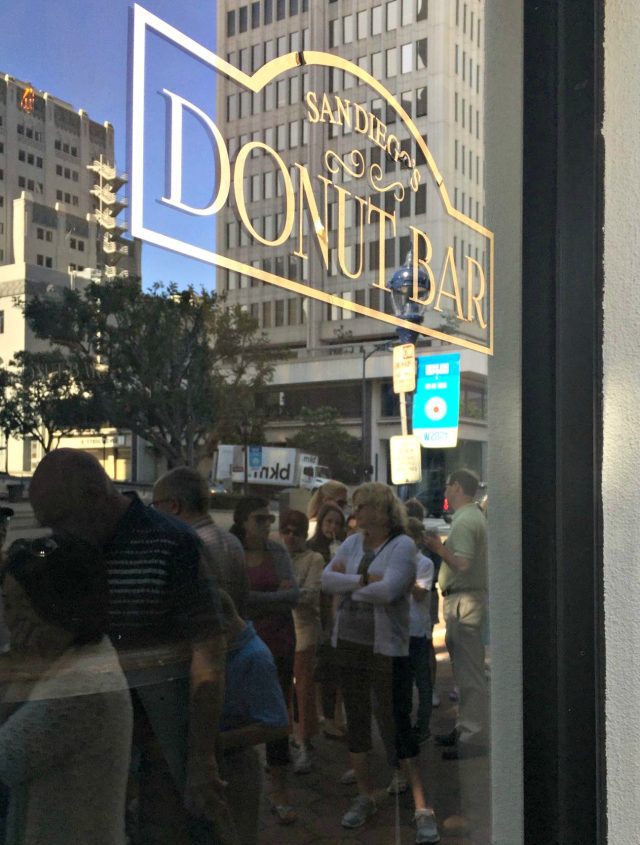 I decided we’d stop by for Father’s Day weekend, because dads like donuts, right? Well, my husband is a fan of all things sweet, so that was enough for me. They opened at 8 am on Saturday, so I figured if we showed up around 8:30, we’d be just fine.

I was right and wrong. I was right because they still definitely had donuts, but I was oh, so wrong, because there was a line out the door. We weren’t the only ones with donuts in mind that morning. I’d like to say it was because of Father’s Day that it was busy, but one of the workers confirmed my suspicion: they’re always busy…especially on the weekends. People walk out the door with dozens at a time. 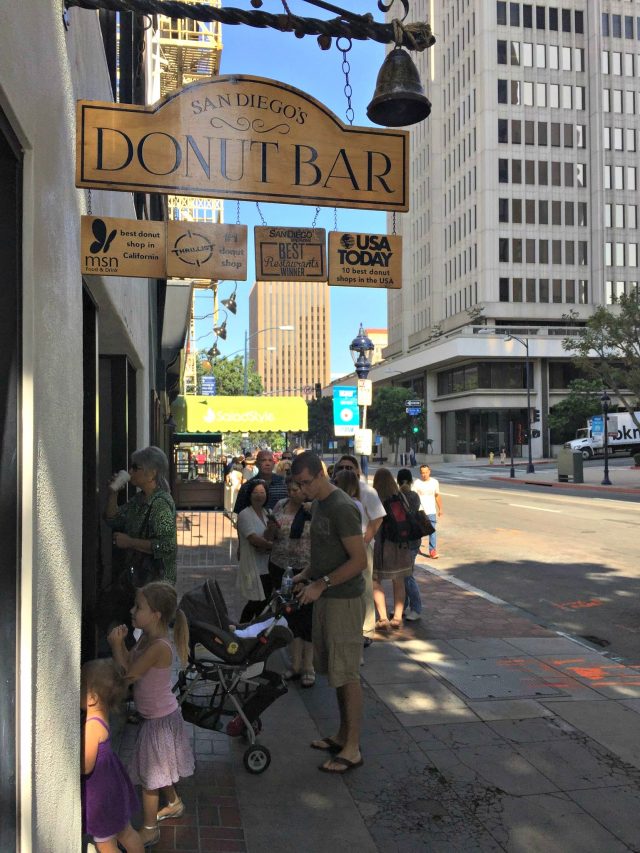 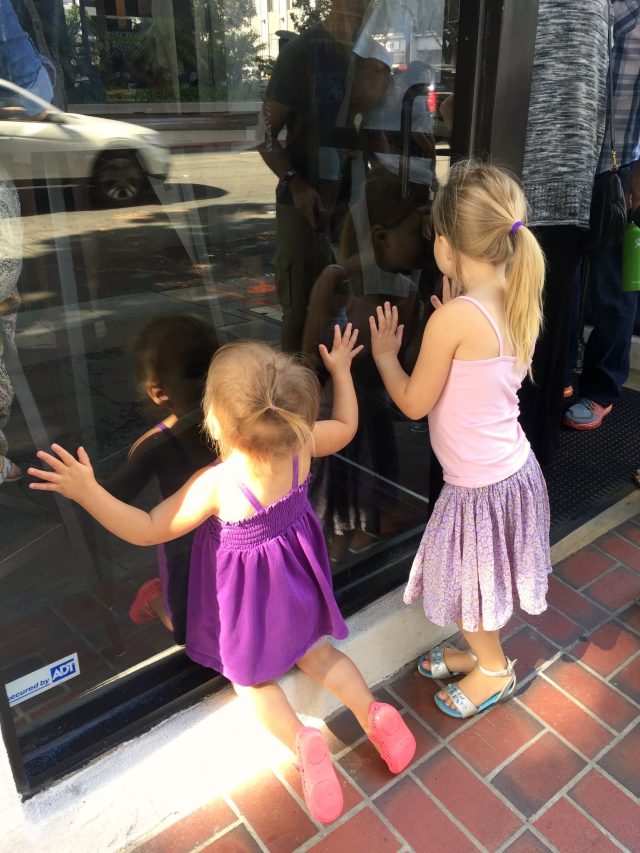 But seriously, the line. There were like eleventy and a hundred people…according to Julia, at least. 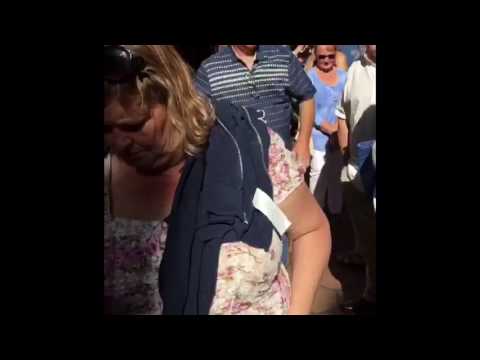 So why is this place so popular? Well first, I think they’re hip. Is it cool to say a place is hip? They have bright colors everywhere, a funky industrial vibe going on, and they’ve made the donut into its own crazy cool character.

I really like that they’ve really played into people’s love of donuts and made it exciting. 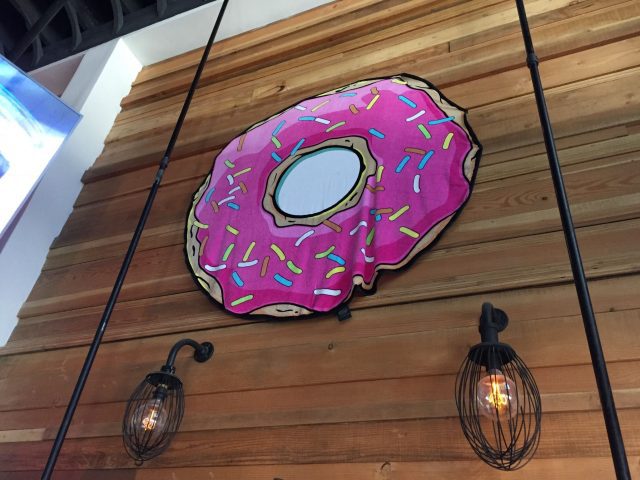 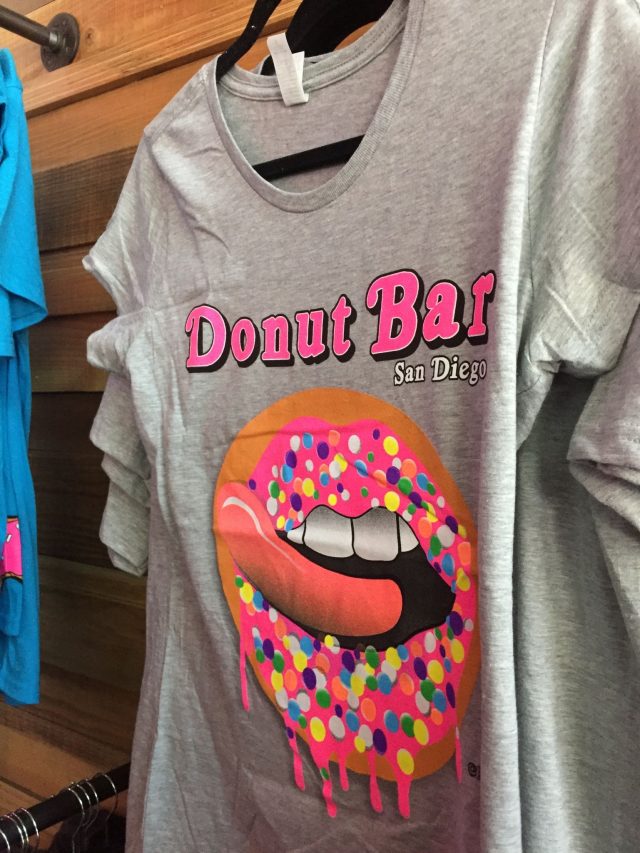 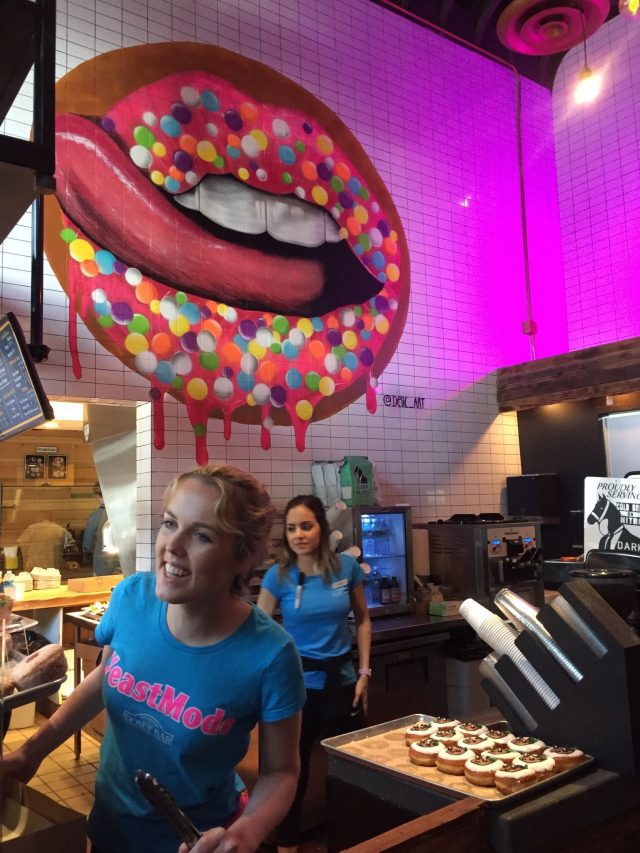 Besides making thousands of donuts every morning (they close whenever that last donut is sold), they’re also open on the weekend evenings for Donuts and Beer! Yup, they have an actual bar with local beers on tap. (I really want to check that out sometime, so hopefully I can give a full—yet probably tipsy—review on that before we skedaddle out of here). 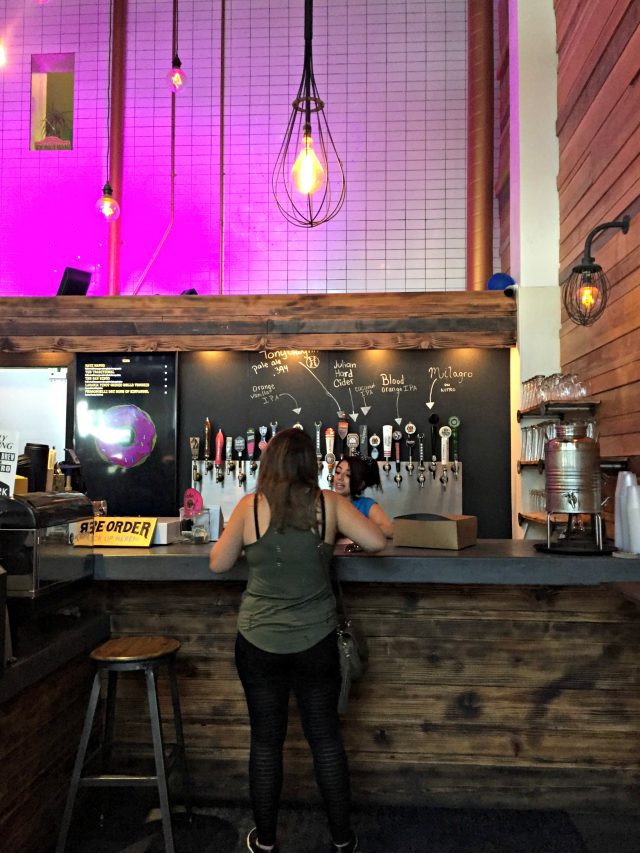 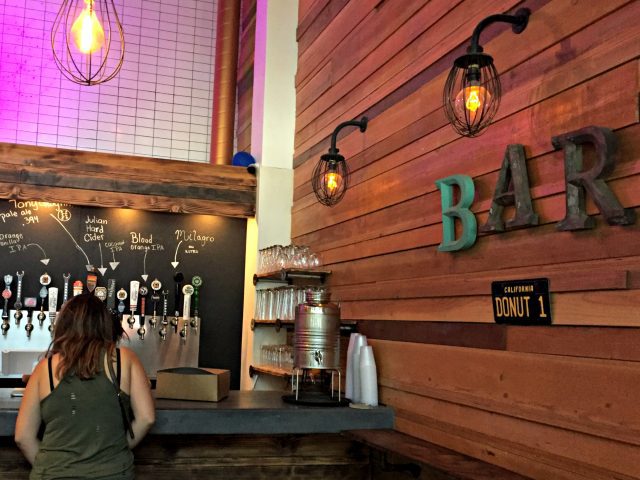 O course, the reason this place is on the map are the donuts. They have at least two dozen varieties of fresh donuts out every day, and they’re all fancy schmancy. Seriously, they almost look too pretty to eat. Almost.

The day we were there the lady at the register said they just had someone pick up 80 dozen donuts. Eighty DOZEN! I did the math for you: that’s 40 short of 1,000. I’d like to go to that party! 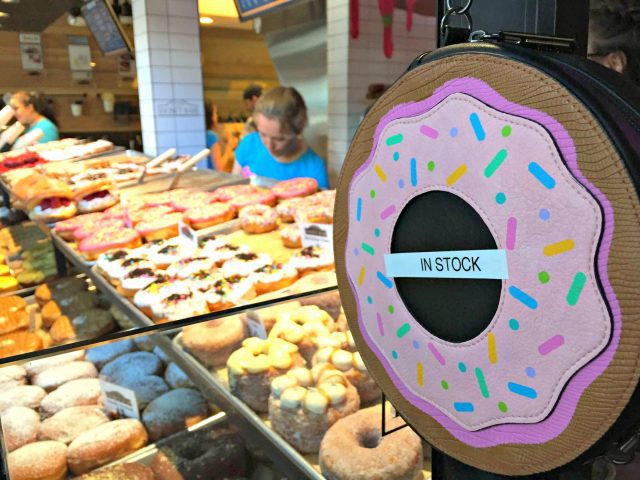 Even though the line was long, by the time we got near the front we got a little treat.  An awesome man (he worked there, don’t worry) walked out with samples of their made-to-order French Toast donut. I was pretty much sold on that after one taste.

So what did we end up picking? 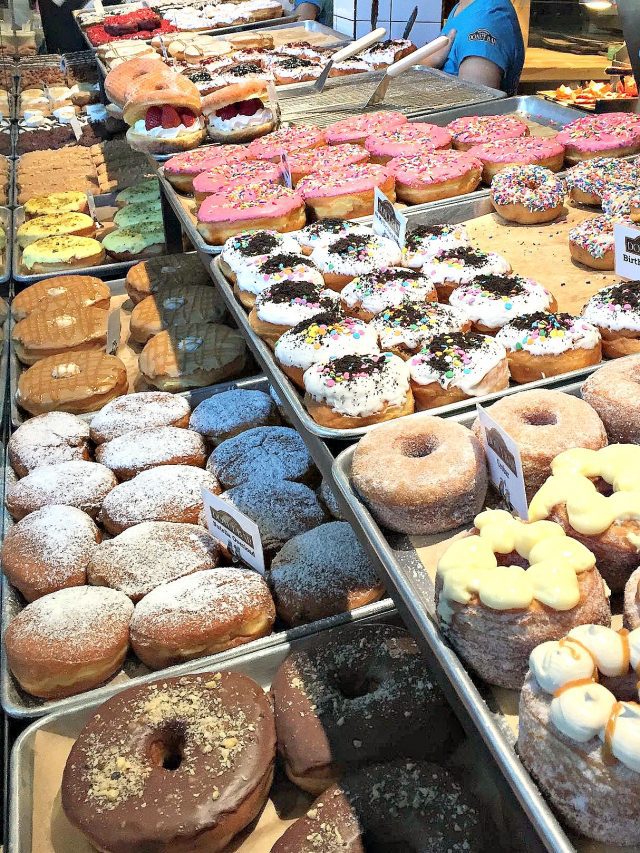 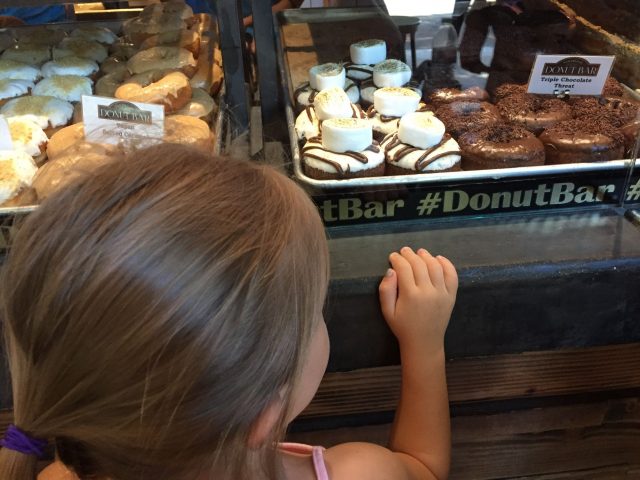 It was a hard choice, and I wish I could’ve tried all of them, but here’s what went down. My daughters both wanted something pink with sprinkles, so the Strawberry Cream Cake was an obvious choice for them. 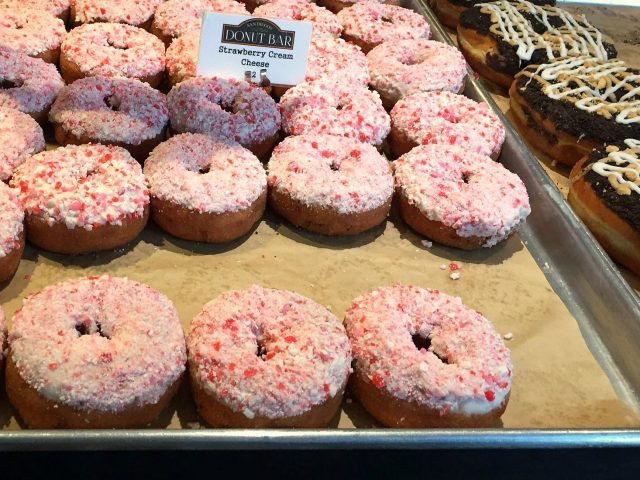 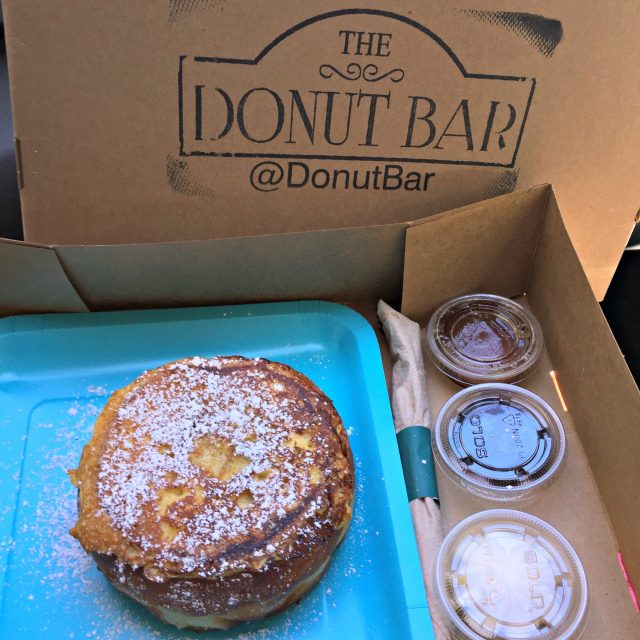 I picked the French Toast donut, because after that one little taste, I was sold. It was made to order, and worth every calorie.

We also picked out several others (because when in Rome…): Red Velvet, Mud Pie, Triple Chocolate (which my husband devoured), and a Strawberry Shortcake.

One really cool thing (that we didn’t find out until we were up to pay) is that all kids get a special free donut on Friday and Saturday mornings! Since we had our three little ones in tow, they gave us three free Groot donuts (from “Guardians of the Galaxy”). 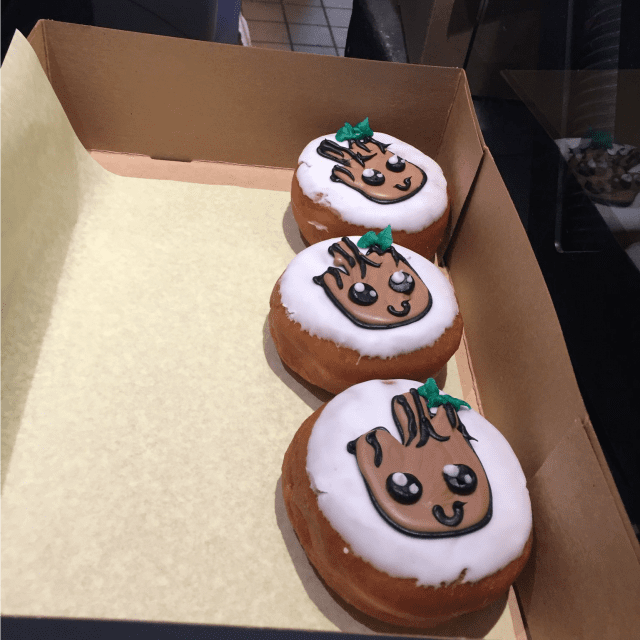 Oh my gosh, and speaking of little kids and donuts: thanks to our middle one being in the middle of potty training, I got to see the bathroom while I we were there.

The girls wanted to know who the silly yellow man was with his belly hanging out, so while I chuckled out loud, I got to explain that it was a grown up cartoon. 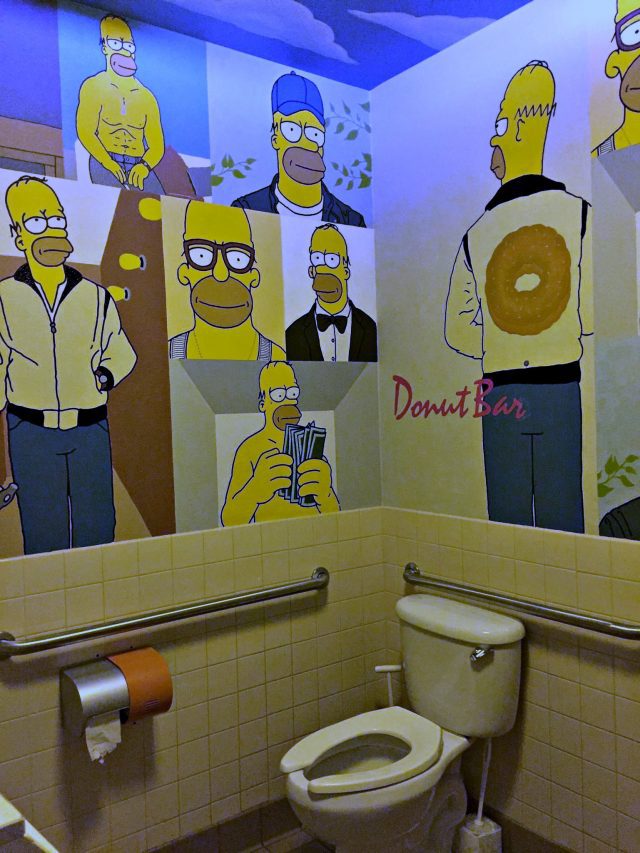 If you’re a Homer fan, they have a donut with his name on it, literally. 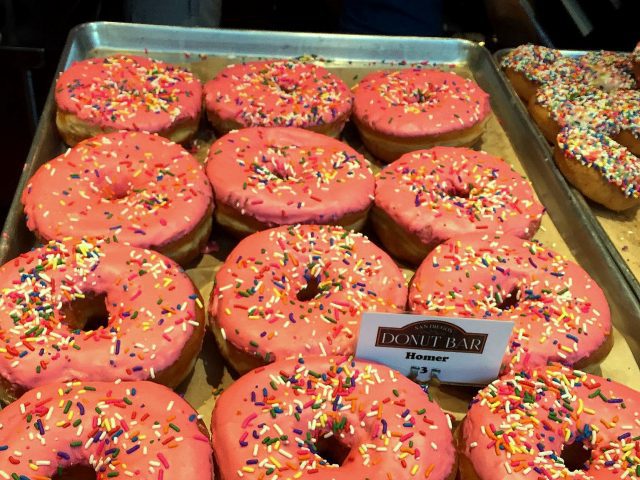 So did it live up to its hype? Kinda. It’s fun to check out a spot that everyone talks about, and the actual shop itself was pretty fun and trendy. But while the donuts were big and had a great variety on hand, I personally found them a little on the dry and almost flavorless side (for the actual donut part). The Mud Pie, for example, looked like it would have an awesome filling in the middle, but nope.

My French Toast donut was AMAZING, and my husband liked his chocolate one, but the others were slightly just lackluster. I actually prefer the little donut shop around the corner from our house a lot more (the red velvet there makes my mouth water). If we go back I’ll definitely try some other ones and give them a shot—like the maple bacon or the Oreo donuts.

On the flip side, the Donut Bar in San Diego is conveniently located near the airport so you can pick some up before your flight or right after you land, and your sweet tooth will thank you for that. It’s also just plain fun to experience, so even though it’s not the best donut in my personal book, I’d go back in heartbeat.