It’s hard for me to grasp the fact that this time last year we were brand new residents in San Diego. It was just the four of us back then, and I didn’t have a clue how drastically my life would change in just a matter of days.

My blog’s tagline is “Life, Love, and Everything in Between,” and I feel like this past year has really put that to the test. I have so many posts in my head and on top of that I have dozens of half-written drafts to publish, but the only thing that actually seems to come full circle are my thoughts on processing this grief. With that said…more not-so deep and depressing posts are coming sometime soon.

Everything was great—hunky-dory even. We had a new address in San Diego; a dream destination not just for those in the military, but anyone who loves near-perfect weather year-round. We also just wrapped up a wonderful cross-country road trip with my parents, and my husband and I finally decided we wanted our family to grow a little more. Plus, I was excited about finding my groove, and growing this blog more. Life was, in fact, pretty great.

And then this week a year ago happened. We didn’t even know my dad was that sick. We thought his lack of hunger on our road trip was just from some random bug since we had been on the road for a while. And when he complained of a back-ache while he was out here helping us move in, we figured it was just because of the new, cheap Ikea mattress he was sleeping on at night. A year ago, pancreatic cancer was the furthest thing from our minds.

But my mom had a feeling…or at least some sort of instinct to call the cancer center where he’d been treated for with his Non-Hodgkins Lymphoma before. Thank God she called there instead of having to jump through appointment after appointment with just a regular PCP. Since they were still out in San Diego visiting, they got him an appointment for the day after he returned back home. 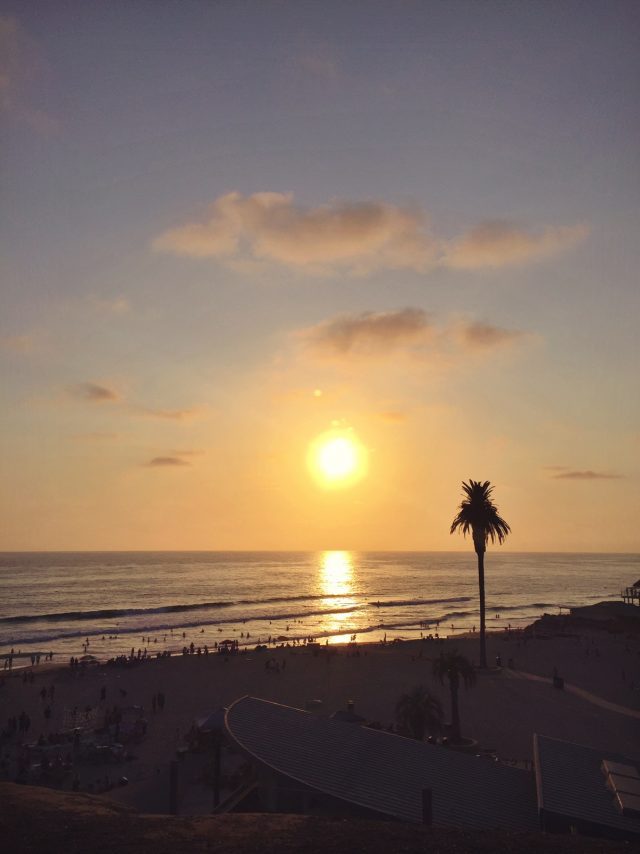 The day before he left San Diego last year was actually his birthday. And looking back on it now, that was the day before everything changed. I wish I could recall all the specific details from that day, but thanks to baby and mom brain, I can only remember what I have saved from a video and pictures. Since he was never hungry, I made him his favorite birthday dessert, and hoped he’d eat it. I’m still happy that he had more than a few bites of the banana cream pudding trifle I made.

I have no idea what we had for dinner that night, but we did go to the beach; I remember, because I can still see him standing there gazing out at the ocean. He was at peace. He always loved San Diego, and even though I don’t know if his toes ever actually touched the sandy beach, he always loved going to the edge of the coast.

So for his birthday this year I made a banana cream pie, and we went to the beach. I thought about how much he would’ve been in people-watching heaven with how many beach-goers there that evening. And I imagine that he would’ve been sitting there with his new grandson, telling him the ways of the world…or at least looking at all the pretty girls. He also would’ve loved—just absolutely loved—watching his “Fruit Loop” and “Cream Puff” running around, splashing in the water, and playing in the sand.

I hate that life’s moved on. I hate that everything about the next several weeks (a year ago) were a blur. I hate, hate, hate, HATE cancer for taking him from our family. I hate that he’s not here, and that I didn’t realize how short my time was with him when I had all the time in the world to spend with him.

But mostly, I’m sad that he’s not here anymore, and that it all happened so unbelievably fast.