Oh, boy. This month I dropped the ball on keeping track of my third baby’s stats. It was bound to happen, and it makes sense since he was more on the move. Seriously, he’s always moving. He reminds me of his big sister. Julia was never still as a baby, and he’s the same way. 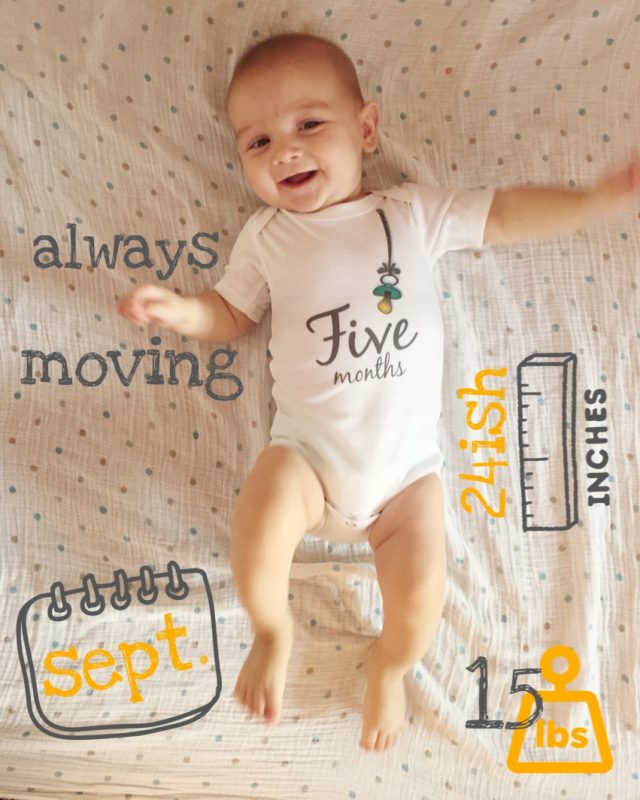 Likes: Nursing, watching his sisters, watching everybody, making eye contact with people, rolling over, and trying to crawl

Dislikes: not having anyone around him (he gets lonely), having a dirty diaper, being over tired

Milestones: He moves around allllll the time. Scooting and pulling himself to where he wants to go. He discovered his feet, which is one of my favorite things, because he tries to eat them, and sometimes holds them while he sleeps. He also looks longingly at food.

Clothing Size: 6 months…unless it’s from Walmart, and then he’s still in 3-6.

Sleep: So, we moved him to his own crib and ditched the swaddles and the Dockatot. I loved all of those things, but I also wanted him to learn how to sleep on his own sooner than later since we waited too long with the girls. He definitely doesn’t sleep as long in there as he used to in our bed, but it’s getting better, maybe?

Random Tidbits:  Um..I’m about a month late with doing it this month, so I honestly don’t remember. Whoops.

How are Mama and Papa Doing? We’re good. He’s a pretty chill baby, and if he’s crying or upset, there’s a good reason as to why (pooped, hungry, or tired), so once we figure out what’s wrong, he goes back to being a happy camper.