I feel like tooting my own horn since I actually took his picture on his six-month birthday this month. If only I managed to get this up at the same time!

This little boy of ours is growing up too fast. I know everyone says that, but seriously. He’s crawling already! And (as of writing this post), he’s pulling himself up to a standing position all.the.time. He’s also totally interested in eating, but we haven’t really introduced that yet. One huge milestone at a time; plus, we needed to get new straps for the high chair…

Unless he’s hungry or over sleepy, he’s pretty much a delight to be around, and the way that he looks at his sisters just melts my heart. They love playing with him, and it’s very comforting to see how they interact with him. 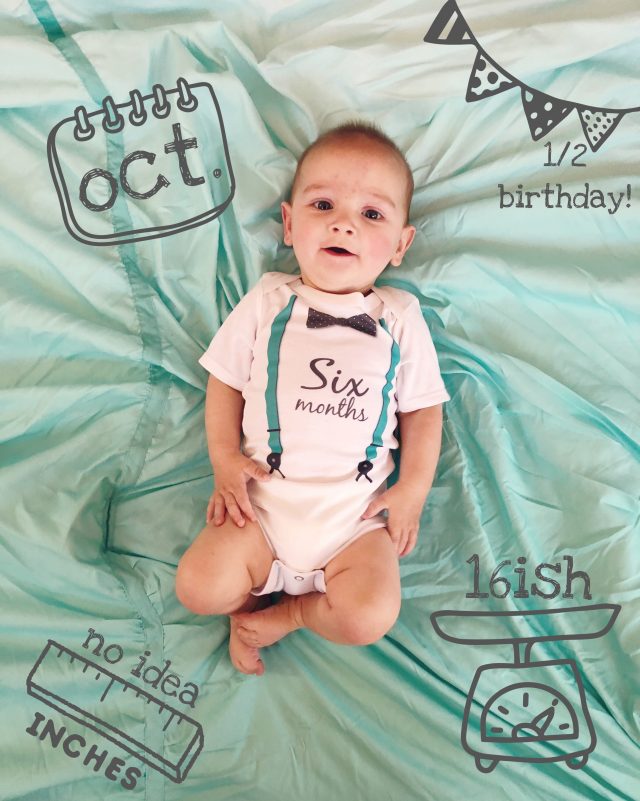 Likes: Nursing, watching everybody, crawling, trying to pull himself up, attempting to eat, sleeping in mama’s arms

Dislikes: not having anyone around him (he gets lonely), having a dirty diaper, being over tired…the usual

Milestones: He’s officially crawling…like, everywhere. It started as an army crawl, totally on his belly, but then he realized he can also move on his knees. He’s pretty darn fast when he army crawls, but kinda flops a little bit on his knees. Still, the boy knows how to get from point A to point B rather quickly.

Weight/Height: 16ish pounds and around I don’t know how long. I’m actually really curious about his stats; last month his doc said he’s on the shorter, skinnier side, but I feel like he may have gotten a lot longer this month? His doctor’s appointments are off, so we have to wait and see.

Clothing Size: 6 months, and more 6-9 months. I’m so thankful for everyone who’s let us borrow or who have given us clothes for him!

Sleep: He either has stretches of days where he wakes up every hour, or a few days in between where he’ll get like 4 hours at a time. The thing is, he legitimately eats at most of those wake ups, so he’s not just comfort nursing.

Random Tidbits:  As much as I’m sad to see him grow up, because he’s my last baby, it sure is fun to watch him develop and grow.

How are Mama and Papa Doing? A little on the sleepy side, and definitely a little more stressful now that he’s on the move, but he’s delightful to be around.