We hit milestone after milestone this month, and as much as I want to keep him a tiny baby forever, it sure is amazing to watch him grow. I don’t know if it’s because he’s our last baby, or because he’s actually doing things ahead of the game, but it really feels like he’s reaching these milestones so much faster than the girls did. I should go back and look at their posts to compare (but comparing kids when it comes to growth isn’t very wise…so I’ve learned).

So, despite his desire to grow up so quickly, I’m smothering him with too many kisses, and trying to hold him close since I know the cute, squishy baby days are fleeting. 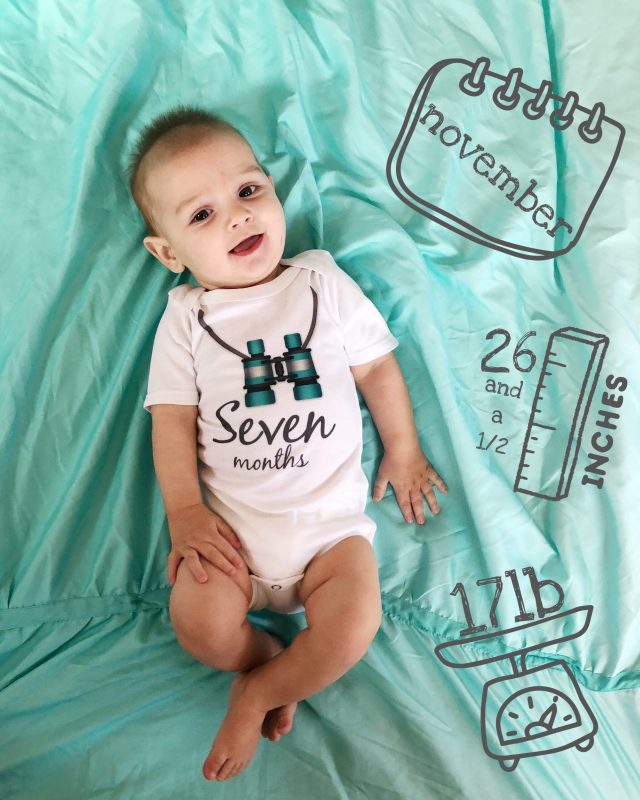 Likes: Standing, crawling, laughing, watching everybody all the time, playing with his sisters, kisses on his cheek and neck from mama, sitting with papa at night.

Dislikes: Being over-tired, standing in his crib and not having someone rush to pick him up, being hungry and wanting more (real) food, not having people around him (he gets lonely)

Milestones: He’s crawling all over the place, and standing and creeping around. He also started solids this month: his first food was sweet potato, followed by green beans, and applesauce. I also made a rookie mom mistake and gave him some of the girls’ oatmeal one morning, not thinking about the cinnamon and peanut butter in it. He rubbed his face and had a topical reaction to it. So, we’ll hold off on mixing foods for now. He also loves puffs and those mum-mum crackers. Oh, and there are two teeth about to sprout through any day now.

Weight/Height: 16.14 ounces, so basically 17 pounds; I should’ve fed him one more time before they weighed him. He’s also 26.5″ (two feet and 2.5-inches in case you don’t want to do the math. He’s on the short, skinny side of the growth chart, so I’ll be curious to see if he hits a growth spurt anytime soon!

Clothing Size: 6-9 months, but most of the pants we have in that size are too long for him.

Sleep: He’s still not the best sleeper, BUT, I think I’m getting more sleep. We discovered that my husband can actually get him to go back to sleep, too, so the pressure isn’t all on me this time. He gets up at least once a night to help put him back down, which is amazing since the girls never let him do that. He also stands and kinda whines, but it’s not loud or annoying enough to wake me up.

Random Tidbits:  Just going with the flow for this little dude. He’s a delight and I love seeing how the girls interact with him. Life is definitely getting a little crazier as he gets older, but I think we’re doing okay for right now.

How are Mama and Papa Doing? We’re good? Yeah…we’re good. It’s fun with three, except for when two out of the three (or all three) are losing their $hit. Then it’s not fun. But 90% of the time it’s pretty great.