This little busy boy is just growing up right before our eyes. He’s at a pretty good age right now. Full of wonder and curiosity, but still a little baby. I love his snuggles—LOVE them—and I’m treasuring our alone time together, because I know how fleeting it is.

He has two new teeth, and is already gnawing on things again like he has more ready to pop through. I’ll take all of the toothless grins I can take, though. The girls are still smitten with him, and I envision what it’ll be like to have all three of them laughing and running around. Chaos. It’ll be like chaos, but hopefully fun chaos. 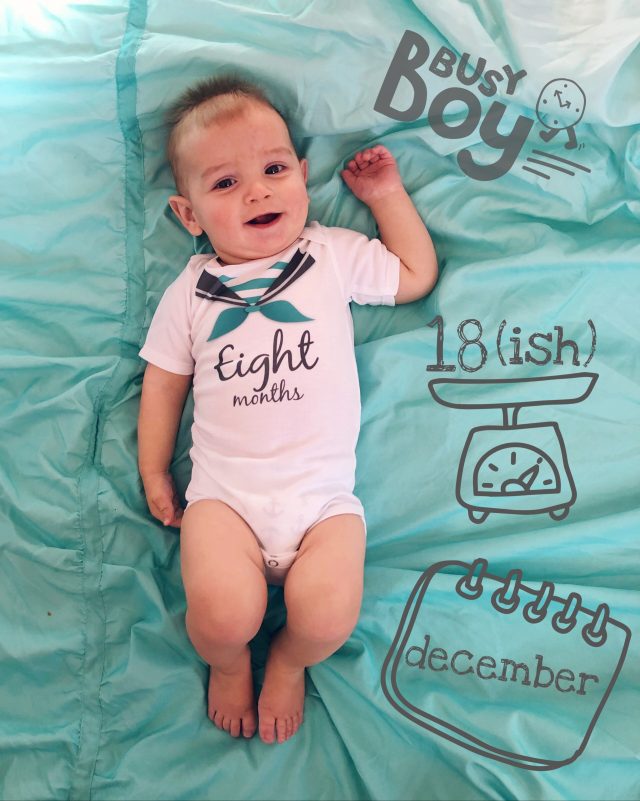 Likes: doing ALL the things: eating, standing, crawling, creeping, sleeping, snuggling at night with Papa, milk time with Mama (if they’re away from distractions)

Dislikes: not having food to eat the second he’s out of food to eat; being alone

Milestones: We have teeth! His two front teeth popped through within days of each other. He also (praise the Lord), can put himself back to sleep now (sometimes).

Weight/Height: 18 pounds…and I’m really curious if all this extra eating is giving him anything on the height chart.

Clothing Size: 9ish months. He’s still short, so pants are long, but 9 months are a safe bet. I’m a few days away from moving out all of his 6-month stuff, and I’m in denial that 12 month clothes are next.

Sleep: Nap times were on the verge of being horrible, but then I put a couple of toys in his crib with him (a lovey and a soft book), and he’d actually play with them, and then go to sleep. Don’t worry; I have a monitor on and I’m keeping an eye on him when he’s in there with those things. We never put anything in with the girls until much later. But, he puts himself to sleep! I think it’s helping in the middle of the night, too; he hasn’t been up as much…or if he wakes up, he’ll go back to sleep.

Random Tidbits:  His smiles melt my heart, and he does this thing when he sees someone new: he’ll smile at them, and then rest his head on my shoulder…almost like he’s shy. It’s adorable. He also loves food. I can’t feed him enough or fast enough, which is hard when you have many other mouths to feed.

How are Mama and Papa Doing? We’re doing good!