Imagine this scenario: You’re a busy mom to three kids under the age of five, and have a husband who’s gone off and on, because duty calls. For the past five years, you’ve literally dreamed of what a trip alone with absolutely nothing to do would look like.

Well, I somehow stepped into that dream when an email landed in my inbox inviting me, on behalf of Warner Bros. Pictures, to the 12 Strong movie press junket in Hollywood. The movie, by the way, will be in theaters everywhere January 19—get your tickets now! 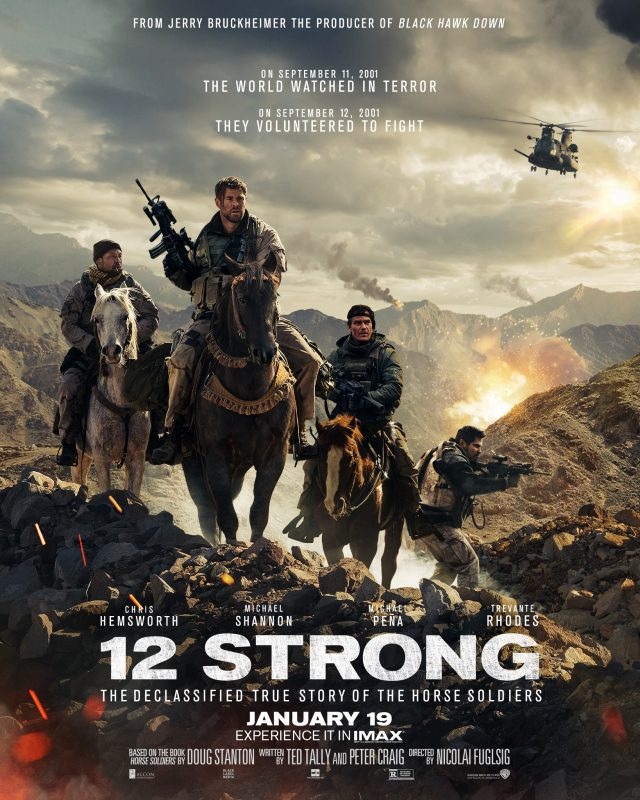 After I verified that the email was, indeed, legit, I started freaking out—in a good way, of course. Nine other milspouse bloggers attended the press junket with me, and I was so honored to be in their presence. Plus, as a woman with eyes, I was beyond giddy at the chance to glimpse Chris Hemsworth in real life. 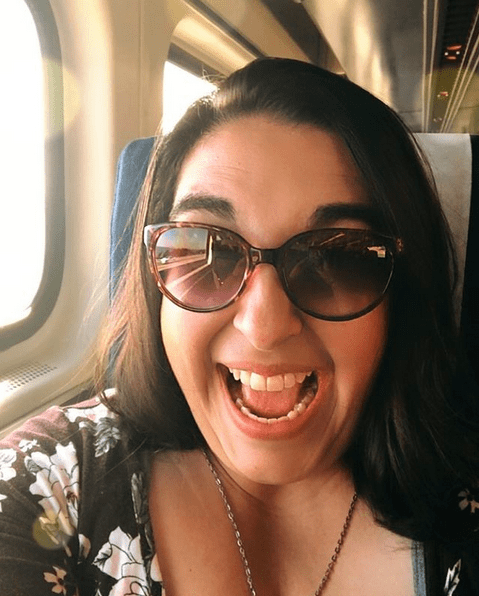 By the way, that’s my excited face, because I was so excited! If you’re wondering what a press junket actually is (because I had no idea), it’s a screening of the movie followed by press interviews with the cast and filmmakers.

Basically, remember the scenes in Notting Hill when Hugh Grant’s character goes to the hotel to try to see Julia Roberts, but gets thrown into interviews instead? It’s just like that. 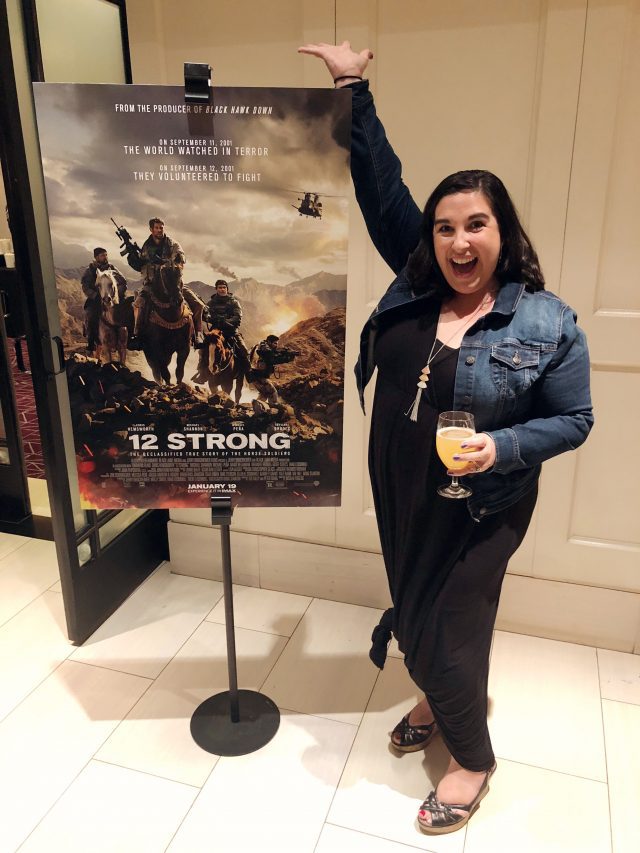 First and foremost: 12 Strong is a true story. Not only that, but it’s a true story depicting the days immediately following September 11 that were classified…until now.

You may know him as a superhero, but Chris Hemsworth leads the 12 Special Force troops as American hero, Captain Mitch Nelson.

We throw around the word “voluntold” in the military community (a joke about when our spouse is “volunteering” to do something that they absolutely have to do), but these dozen men truly did volunteer for the job. They were also, quite literally, the first boots on the ground in Afghanistan for an extremely dangerous mission.

Because of the treacherous conditions, the troops had to adapt and fight on Afghani horses while fighting more than 50,000 Taliban soldiers. 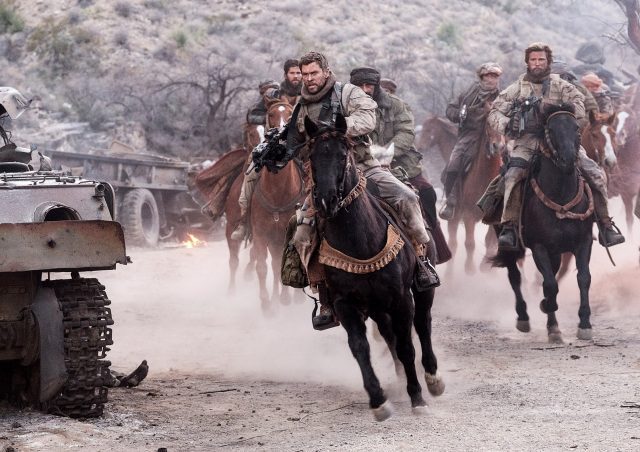 Clearly outnumbered and outgunned, these 12 guys on horses, joined forces with the Northern Alliance to take down the Taliban and its al-Qaeda allies, all while fighting against a ruthless enemy that prides itself in taking no prisoners.

It’s enough to make even the toughest soldier crumble, but Nelson and his team literally went all in, going face to face in a covert operation in an unthinkable battle of war and courage.

Take a look at the trailer to literally see this in action: 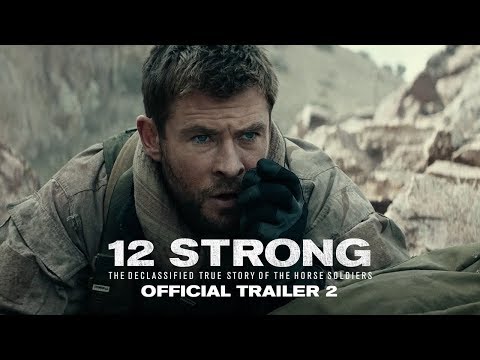 I’ll share behind-the-scenes details of the trip later, but I have to tell you about the actual press junket, because it was so empowering, eye-opening, and even humbling.

The press conference started with the talent and filmmakers walking to their seats. It was surreal to see household names sitting in front of me in real life. Producer Jerry Bruckheimer, for example, and of course, Chris Hemsworth. But to see Doug Stanton, author of Horse Soldiers, the book 12 Strong is based off of, sitting next to actor Trevante Rhodes, and Navid Negahban (“Homeland”) sitting at the other end of the table, really put the experience into perspective. 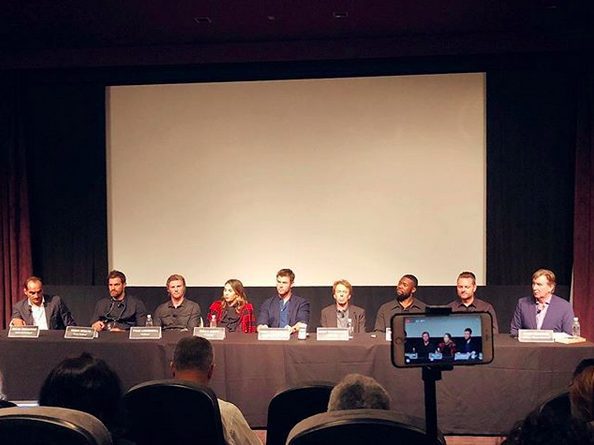 I have to jump in with my favorite part of the interview, because it made me choke up a little bit. The filmmakers really cared about the real-life troops portrayed in the film.

Bruckheimer said it best when he said that the real men the actors were portraying don’t see themselves as a hero. 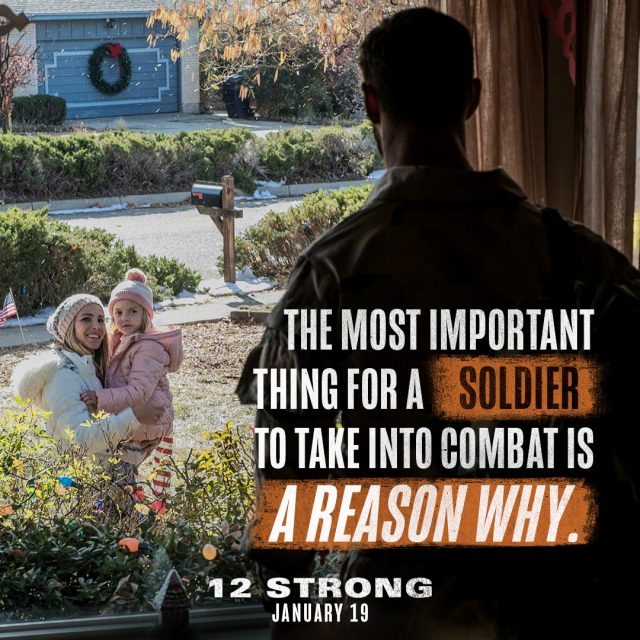 Director Nicolai Fuglsig went one step further, calling 12 Strong an homage to the human spirit, and he couldn’t be more spot on. “They all rose to the extraordinary,” he reflected. “Both on the Afghan and American side, all these heroes were just ordinary people.”

And speaking of ordinary people, some of the Afghani extras who worked on this film were actually there, literally from the same villages during the time of these battles.

It turns out that there’s a rather large community of Uzbek families, Tajik families, and Hazara families living in Albuquerque, New Mexico, where they filmed the movie. But instead of just casting them as extras, they actually sat down and heard their story.

“There were soldiers who are right now refugees, and they live in Albuquerque, and I think they really helped us by telling us exactly how they were feeling,” commented Fuglsig. He went on saying, “It was crucial just to sit there and listen to them.”

And listen to them they did.

Negahban actually visited families who were interested in being extras, sat down with them, and explained the movie and what they were doing. You could tell that he felt humbled and proud that the film took that extra step in getting to know them.

“I think this was the first film that truly shows what Afghans went through, and how we united with them and to achieve our goal,” Negahban said.

Hemsworth also chimed in, marveling that several Afghani refugees living in Albuquerque came up to him, appreciative for telling this story. He recalls one man in particular, sharing his story.

“I fought with the Americans,” the refugee told him. “But the whole world thinks I’m a terrorist. I think it’s so important that…people know that we are on the same side, and the invading forces—the Taliban, the al-Qaeda—that they’re the ones who are coming in to take over and to restructure the place.”

Knowing that little fact, truly made a big impact on how I viewed the film. I love that the filmmakers and actors took the time to make this as authentic as possible. 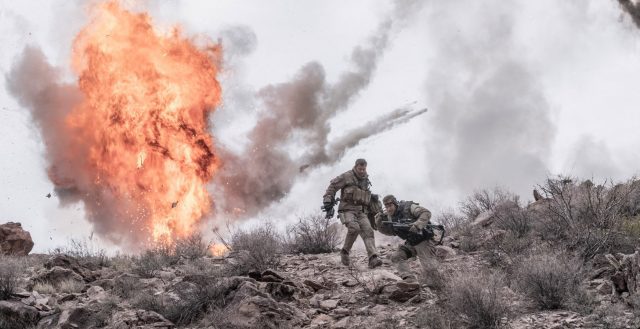 The actors spent around a month doing military training, and they had military advisors on the ground while filming. They also wanted the scenery and the ambiance to look as realistic as possible.

Shot entirely in New Mexico, Fuglsig reflects on the importance of immersing themselves into the scenes. He wanted the viewer to feel like they were in an epic war paint—uncomfortable, and in a hostile environment. He even describes the New Mexican desert  landscape as a character in the movie.

“It was always important for me to try and portray Afghanistan in the most accurate way,” he says. “We’ve seen so many movies that we, you know, try and get the terrain right. And I really feel we did it. We really took pains to go to very remote areas.”

(Almost) One-on One with Chris Hemsworth

Which leads me to the second part of our press junket: a round table, 15-minute discussion with the one and only, Chris Hemsworth. Okay, so it wasn’t exactly one-on-one, since there were 10 of us there, but Hemsworth did sit right smack dab next to me (swoon!), and I even got to squeeze in a question. 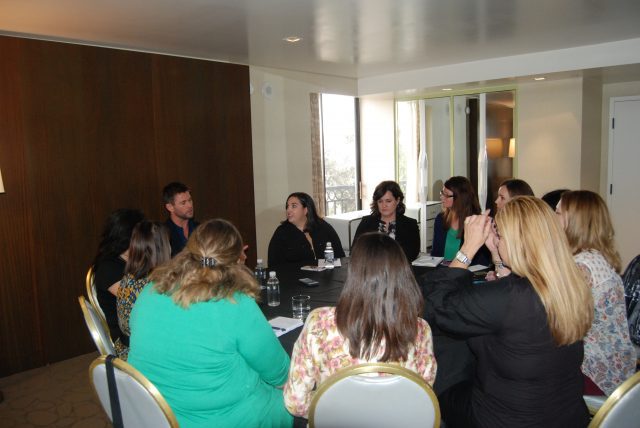 Of course, I couldn’t let him get away without asking something about New Mexico. He’s no stranger to filming in the Land of Enchantment, but this was a little more remote and rugged than when he portrays his Thor character. I asked him what it was like filming in the middle-of-nowhere desert for this movie.

In his perfectly dreamy accent, he explained the conditions and how it related to his character:

“We shot day and night scenes, and you’d be sort of sweating all day in all your gear…and then it gets to night time, and you’re like, ‘I think my character wants to wear that jacket.’ [But] It’s a continuity set, buddy. So you have to kind of think in character and out of character a fair bit about with what you’re wearing and how you can adjust it.”

It was so welcoming sitting around the table with fellow military spouse bloggers, because we get it. These seasoned spouses, who’ve been around the block a time or two, had excellent questions. 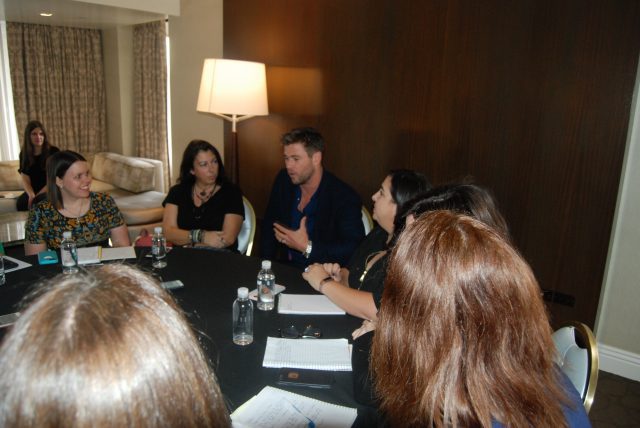 Someone asked Hemsworth how he found courage while portraying this character. He recalled talking to Mark Nutsch, the man his character is based on, and Nutsch was completely nonchalant about the incredible mission they accomplished.

“There is a no sort of bravado or sort of ego in the presentation about what he’s achieved,” recalled Hemsworth. “It’s just, ‘It’s my job.’ He could be talking about doing the grocery shopping, like it’s that sort of matter-of-fact and honest and truthful. And that sort of humility and that integrity, that was something that I’ve noticed in all of the military guys we were interacting with. It’s just this complete, selfless sort of attitude, and I think we were all trying to embody and grab a hold of and imbue into the characters.”

Hemsworth also commented that he admires the role we, as military spouses, play. As he was leaving for the press junket, his daughter was sad that he was leaving again. He admits that it brings him to tears to leave his family, but then he put things into perspective.

“To be walking out the door going to war—what you guys deal with—I mean, I cannot imagine. And again, it takes a certain person to be able to do that. And I don’t think I have that strength. So yes, it’s incredible.”

To close out our intimate time with Hemsworth, Sharita Knobloch from Army Wife Network asked if he had a message to military members and their families, and he did.

“Thank you, thank you for what you guys do and the commitment…so that we can live our life in peace, and enjoy the freedom that many people don’t get,” he said. “We are fortunate enough to receive [freedom] due to all of you guys, and all the military.” 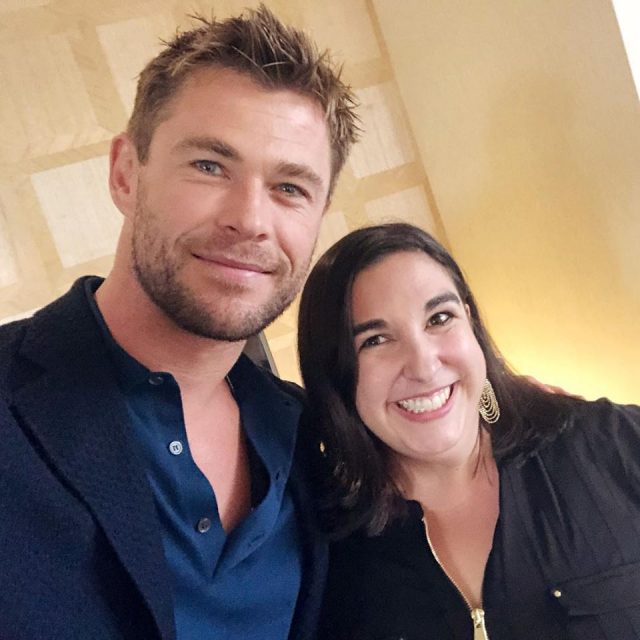 For those of you who know me, you probably know that I couldn’t let him leave without asking him New Mexico’s state question about his preference for chile.

Crossing my fingers and hoping he’d know what I was talking about, I just went for it and asked him, “So…red or green?” It took him a few seconds, and then he said, “You mean chile?!” A smile broke out across his face as he said, “Whatever is less hot. Green. I like green.” (For the record, there’s no wrong answer.)