Ten months. We’re already in the double digits, and I just can’t slow him down if I tried. In the past month, he’s started communicating more in his own little baby way. He lifts his arms, and he’s started signing back a little bit. Oh, and he waves to people, which is just the cutest thing ever.

He’s also still very much a people person. If we’re out and he’s grumpy, all I have to do is get him out of his seat (or wherever he is) and let him see people. He almost instantly gets happier. 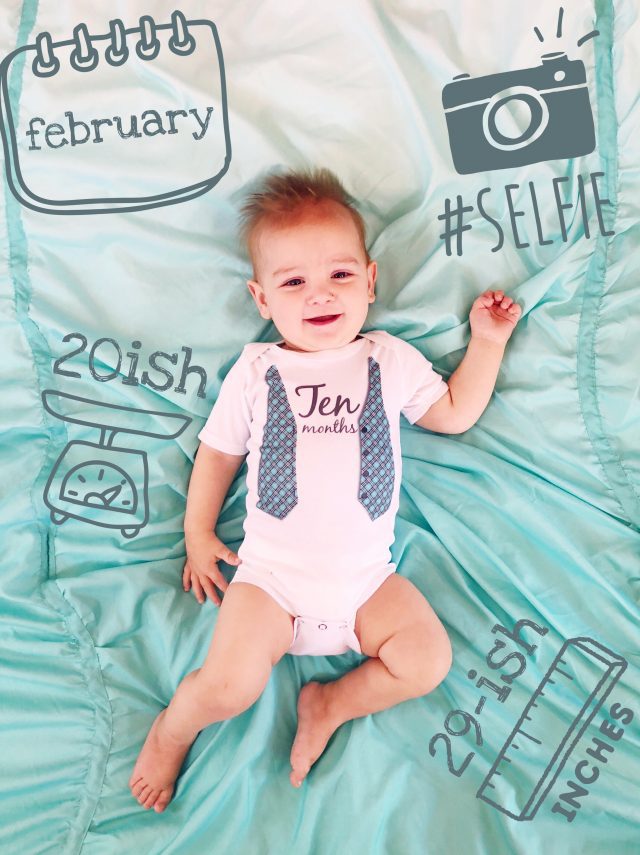 Nicknames: Logan Bear, Wee Man, Stinky Butt, Boop or Boo-boo (what Maddie calls him), and Ju-ju or Lu-Lu (what Julia calls him).

Likes: his sisters—watching them, being around them, playing with them; eating pretty much everything, standing, crawling, sleeping (for naps, not at night).

Dislikes: being over tired, when his sisters leave, and if he doesn’t have food to eat when he’s hungry.

Milestones: he started lifting his arms to be picked up at the beginning of the month. It’s a small, but favorite milestone of mine. He also started to sign back “milk,” and “all done,” and he waves and gives people high fives if they ask.

Weight/Height: close to 20 pounds! He also looks longer to me, so maybe he’s had a little growth spurt?

Clothing Size: 9 months for the most part, but still some 6-9 (only because i need to put them aside), and some 12 month here and there.

Sleep: let’s not even talk about sleep. A couple of weeks ago I was averaging 3.5 hours of sleep a night.

Random Tidbits:  he’s just delightful, for the most part!

How are Mama and Papa Doing? Well, I survived a couple of weeks of solo parenting, and have a few more weeks go to. Being the sole caretaker of three kids under 5 is ridiculous, but I’m doing it, and the finish line is in sight.