Whew, this month was exciting! Not only did I wrap up another stint of solo-parenting, but right after my husband got back, I jetted off to Florida for a work retreat with my favorite Pampered Chef people. I always tell my husband after one of his work stints that I’m going to go check myself into a hotel alone, and just relax. Well, I finally got my opportunity! The place we stayed at had a lazy river, a pool in the backyard, and I didn’t even have to cook for myself. But I digress since this is about Logan and not me. Logan did great while I was away. I saved up sopme breast milk, and he drank it like a champ—so different from his sisters who wouldn’t touch a bottle with a 10-foot pole! It truly made all the difference in being able to leave him.

We dealt with some fussiness that comes from teething, but once those two big front teeth popped through, he was back to his happy self.

I’m in denial that he’s so close to being a year old. Where did this year go? 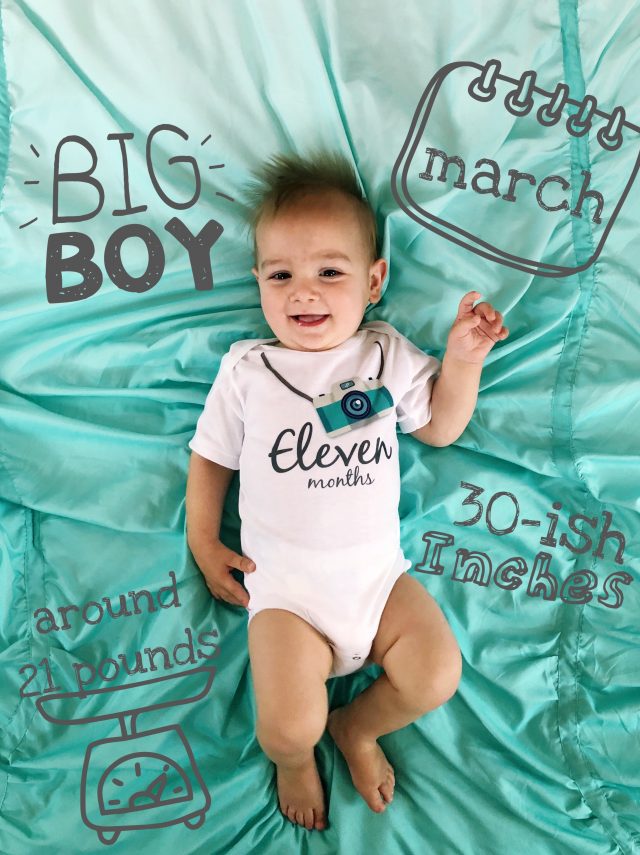 Likes: food, drinking water, playing with straws, trying to make “cars” out of anything, playing with his sisters, being around people,

Dislikes: being over tired, when his sisters leave, sitting in the stroller for Stroller Strides, me leaving him at MOPS childcare, and being hangry.

Milestones: HE SLEPT THROUGH THE NIGHT FOR FIVE DAYS STRAIGHT! That was pretty exciting. And then it stopped, but at least it happened. He also got two more teeth, for a total of four.

Weight/Height: 21-ish pounds, and around 30 inches? We actually have no idea.

Clothing Size: I can squeeze him into most of his 9 month stuff, but I’m starting to move to more 12 month clothes. He’s literally made little holes in the toes for his 9-month sleepers.

Sleep: Well, sleeping through the night was awesome, but then he started teething again and went back to being awake. He’s definitely not nursing as much these days, though, so it’s just snuggles as he tries to get back to sleep.

Random Tidbits:  He survived (and so did I) four days without me around. I went to Florida without him, and it sounds like they all did just fine. I love that I can leave him with my husband and not have a second thought about it.

How are Mama and Papa Doing? I wrapped up the solo-parenting gig, and I’m thankful that immediately after he got back, I got to go away for a little R&R (for work…so there was work involved). He’s pretty delightful, so he’s actually the easiest part of parenting these days. With the exceptions of his blowouts, because all the boy does is eat!