Last weekend we set out to start crossing things off of our summer bucket list, and since it was a gorgeous day out (as most are in San Diego), I suggested we go strawberry picking at Kenny’s Strawberry Farm in Fallbrook, California, about 30 minutes from our house. 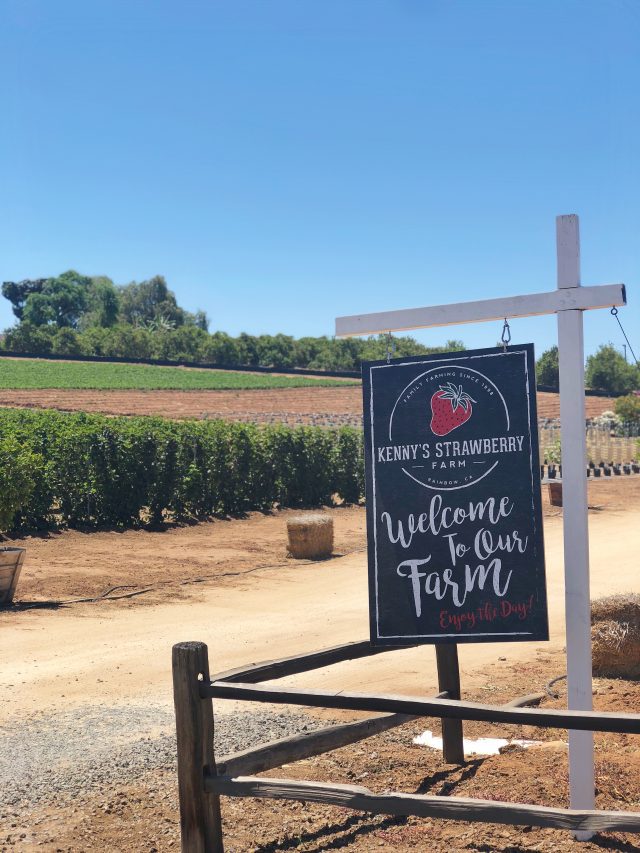 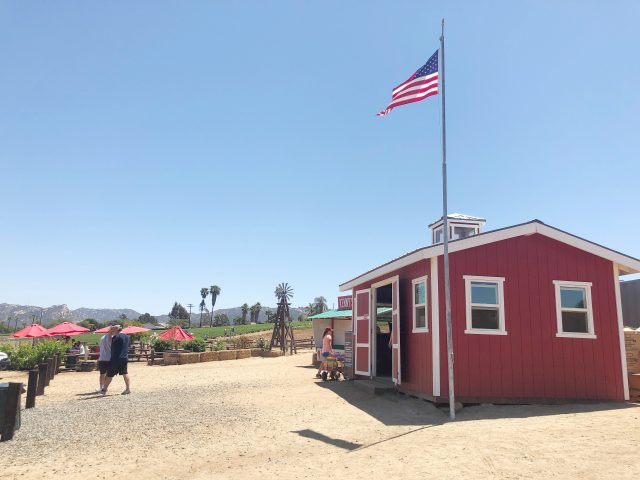 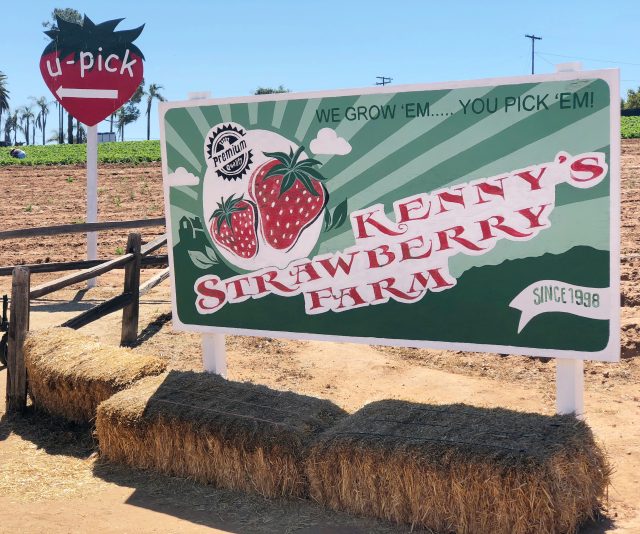 First, just to clear up any confusion: My husband’s name is Kenny, but no, it’s not his farm; it’s some other awesome man named Kenny who named the farm after himself. Sounds like a pretty smart man. Also, you can get more than just strawberries throughout the year. In July, for example, they’ll have watermelon available. 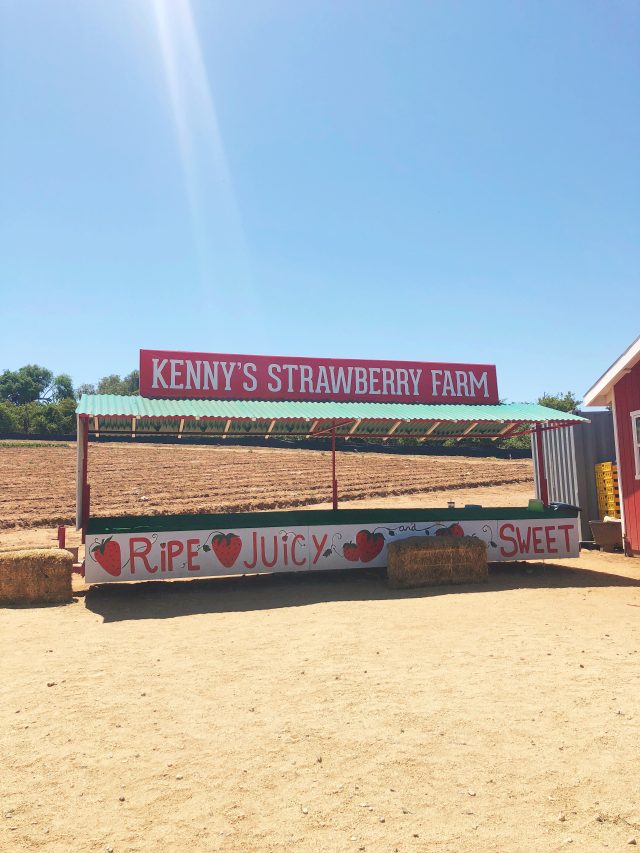 I saw a sponsored post pop up for them Saturday morning on Facebook, and it was perfect timing to pack up and head up north for a bit. 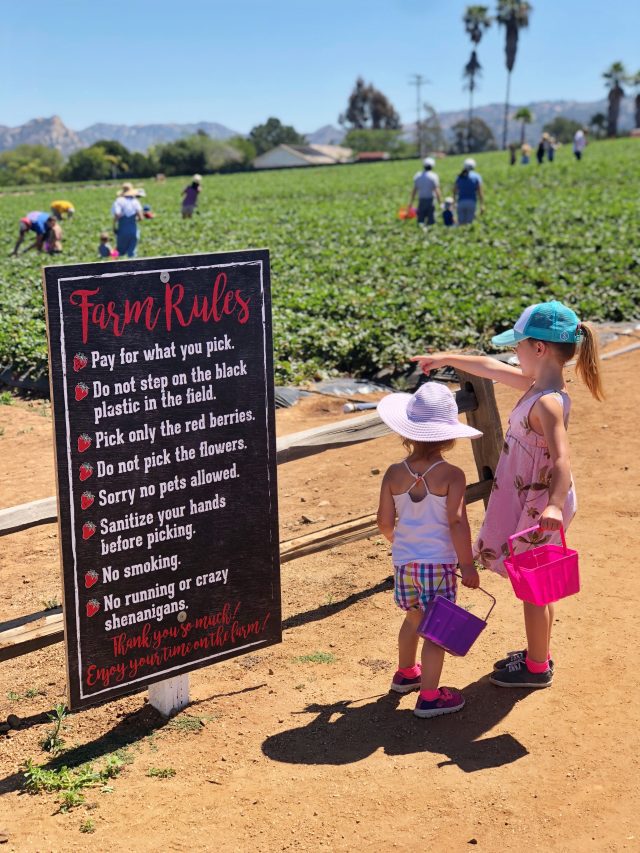 We’ve been strawberry picking before in Georgia, but that already feels like a lifetime (and two kids) ago, so it was fun to go back now that they’re older, and now that we have another kid in tow.

Logan did awesome, by the way, and the girls had no problem picking the juiciest, ripest, bright red strawberries that they could find. 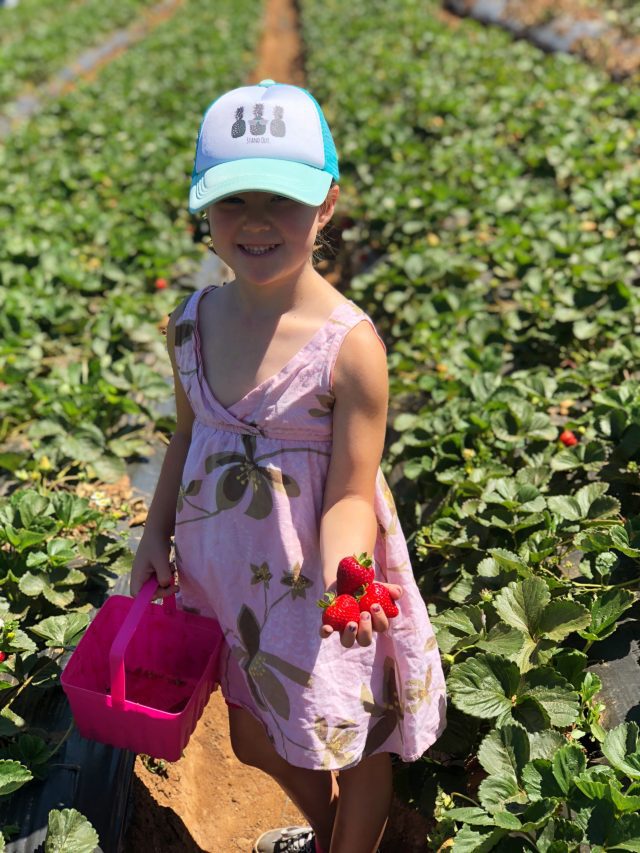 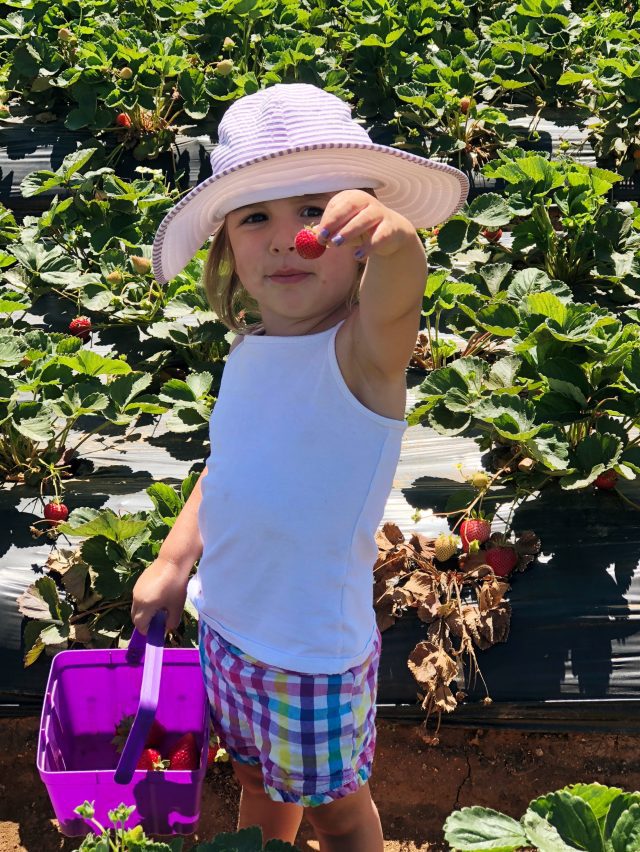 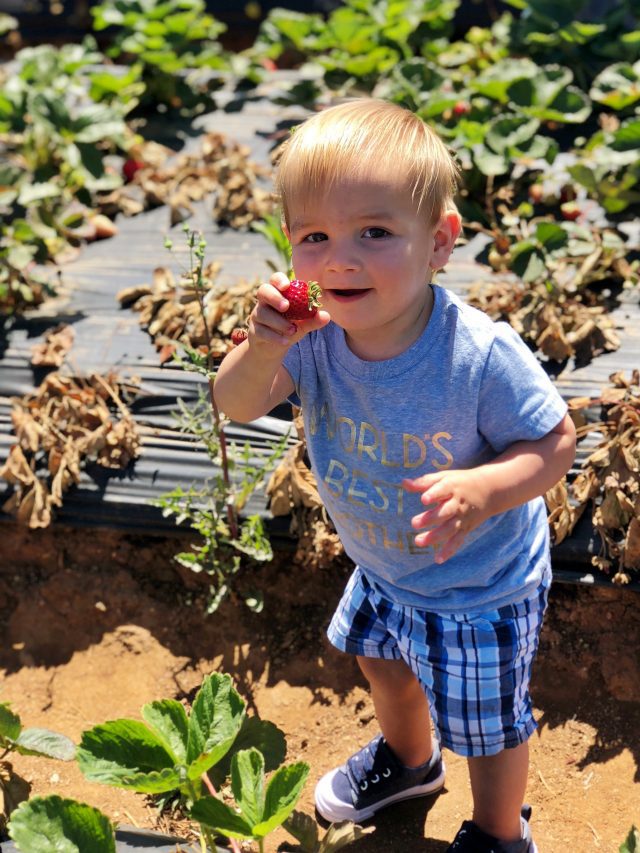 Julia actually commented that one of the berries she ate tasted just like candy. Madilyn chimed in, agreeing that it was sweet, “Just like chocolate,” she said.

Oh, Maddie. She desperately wants to be just like her older sister. 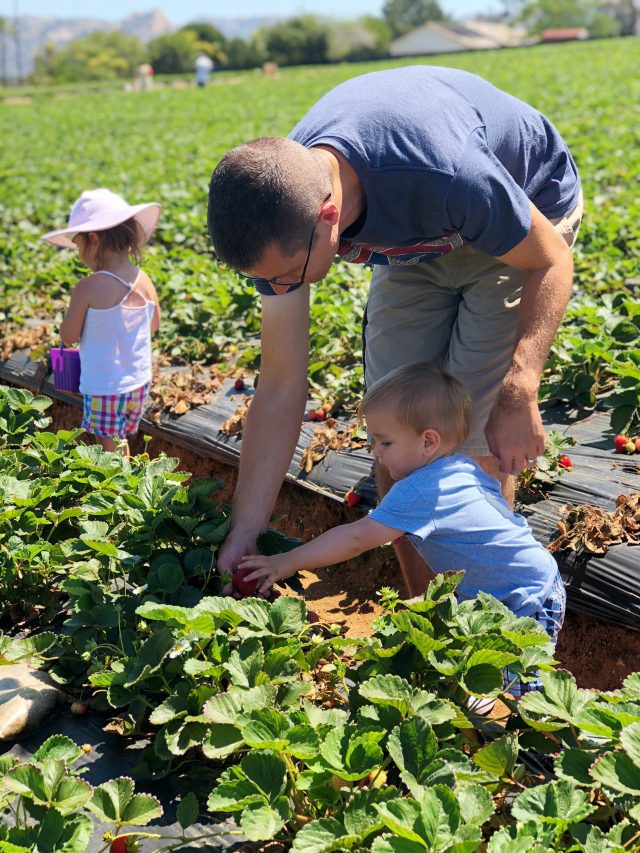 All three kids picked berries as though it’s something they do all the time; they were totally at ease with it, and I was pleasantly surprised with how many ripe strawberries there were. 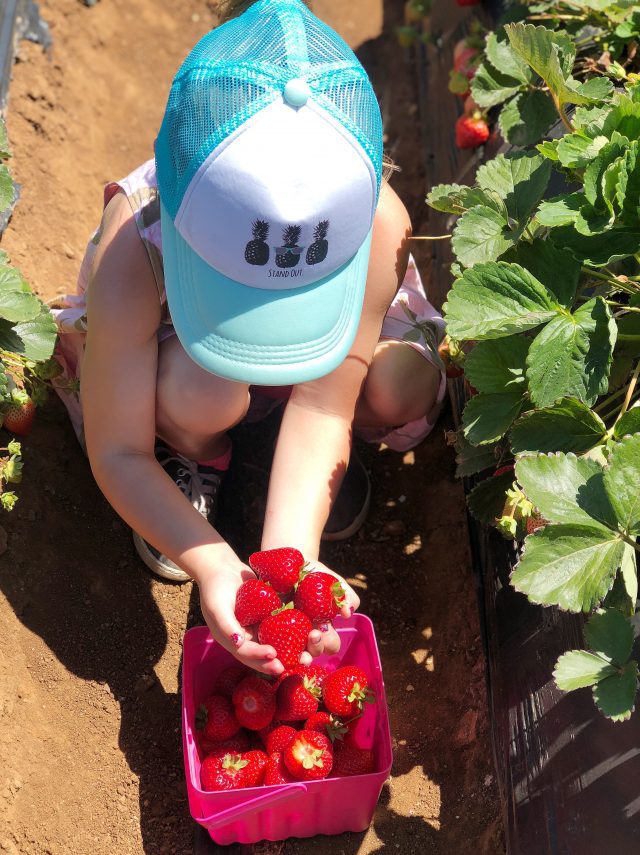 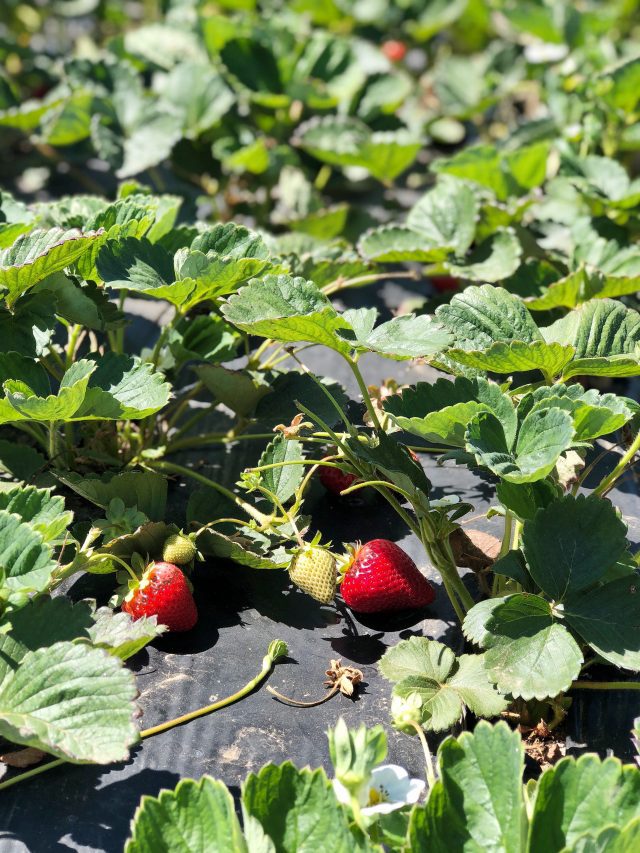 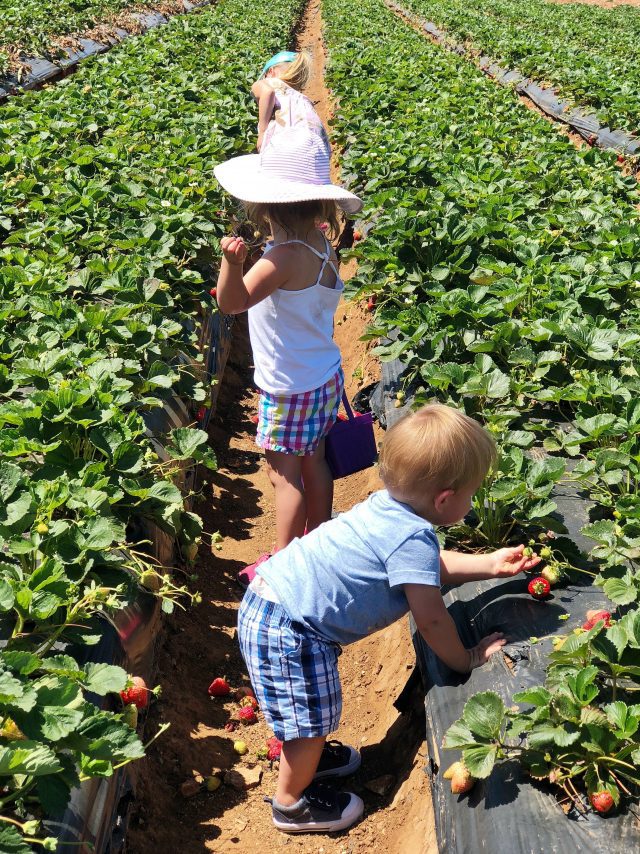 Since we’re nearing the end of the season (apparently the fields at Kenny’s Strawberry Farm opened up in February!), I was expecting the rows to be barren. Instead, they were bursting with fruit, with tons of baby unripe berries still popping up.

What You Need To Know Before You Go 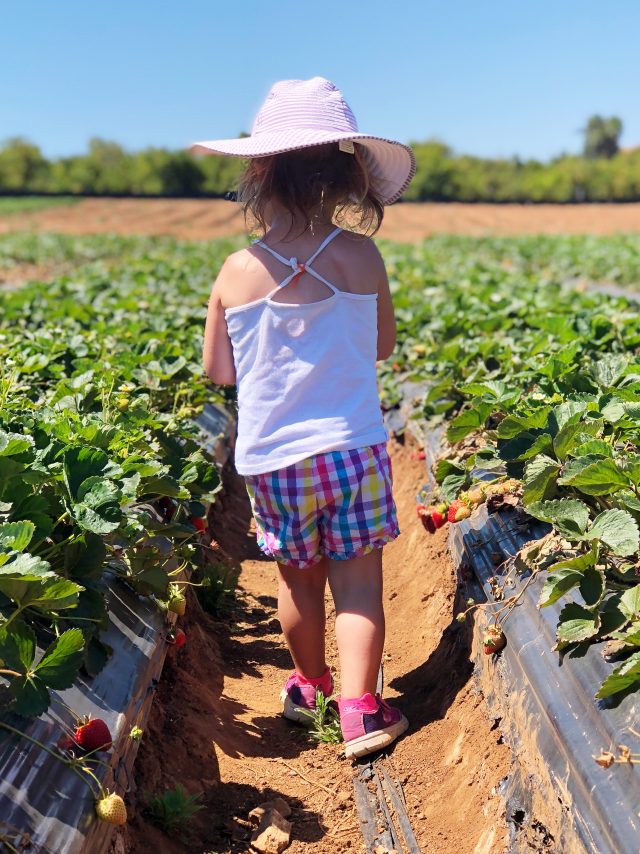 Make sure you’re dressed appropriately. Yes, it’s going to be hot, but that means the sun’s directly on you. Bring the sunscreen, and don’t forget hats.

Also, this is an actual farm, and that means there are bugs and possibly critters. 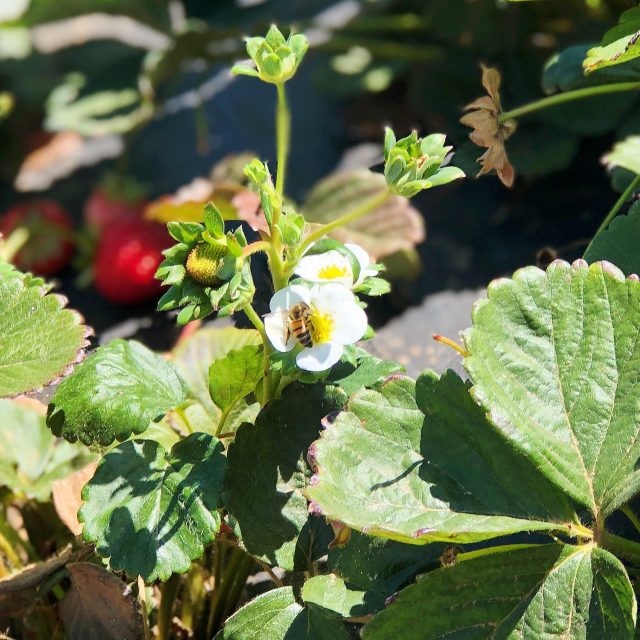 Closed-toe shoes are a very good idea, especially for little ones. 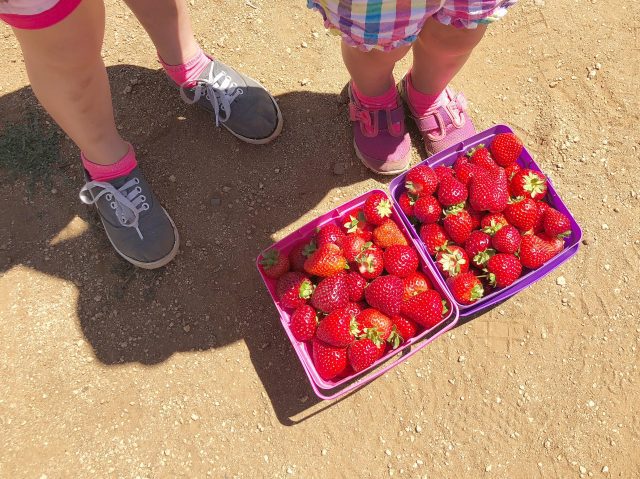 You pay for what you pick by the pound, and they have baskets provided there, so you can leave yours at home. Keep in mind that it’s berry easy to fill those baskets to the brim, but that adds up.

So if you still want money to buy a pie crust (to make an awesome pie with all your fresh fruit, of course), just keep an eye on how heavy your basket is getting. 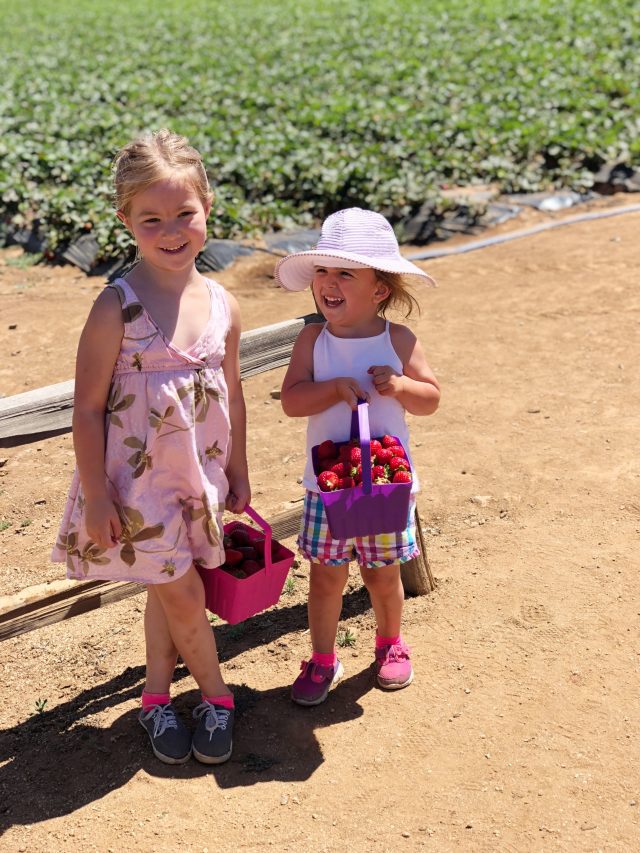 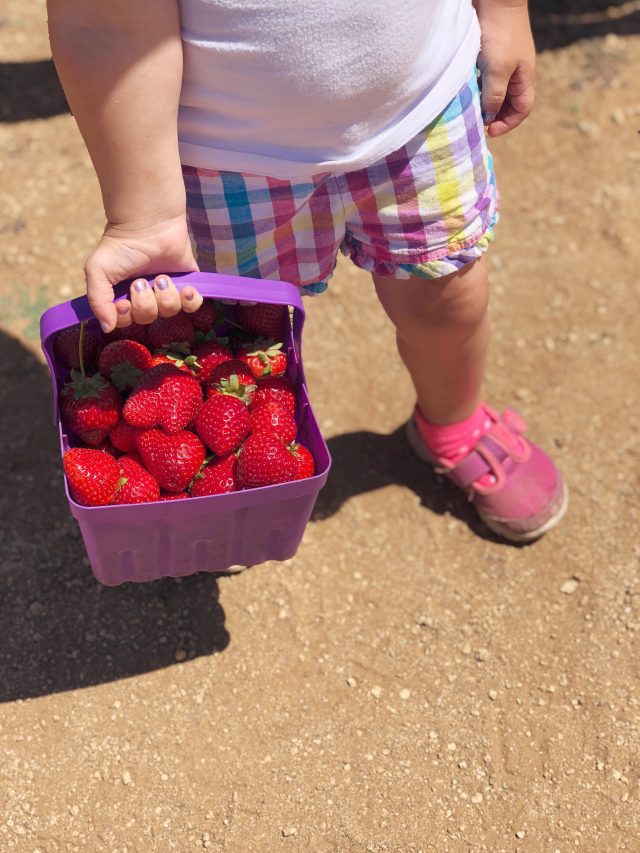 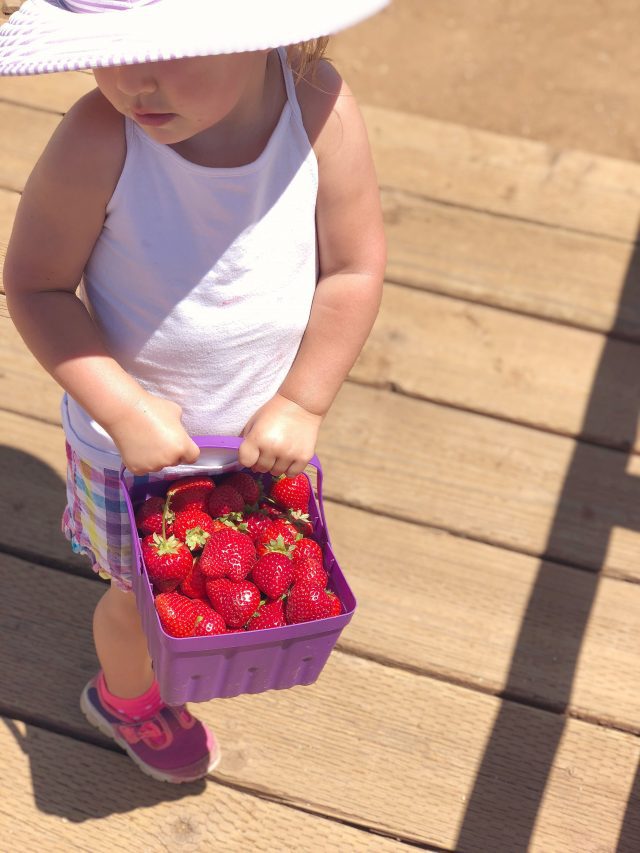 They do take credit cards, and there’s a little shop there with jam, mugs, and shirts, just in case you want to take home more than you fresh pickings.

If you’ll be there around lunch time, bring some food. There are picnic tables with umbrellas, so it’s the perfect setting for a quick meal. They also have a water spout to clean off your fresh berries and eat them right then and there.

Talk about from farm to table! 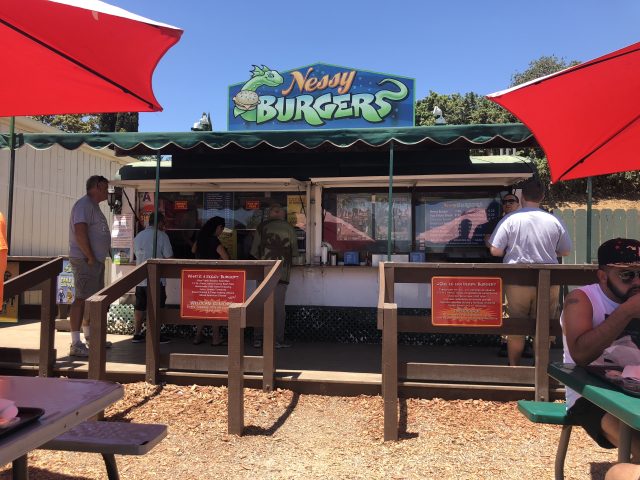 If you forget to pack a lunch, have no fear: about 10 miles south of Kenny’s Strawberry Farm, there’s a little hole in the wall called Nessy’s Burgers. Do yourself a favor and stop there for lunch.

The line was about 10 people deep (with no end in sight) on a Saturday afternoon, which was a-okay in my book; it meant that the food was so good people literally line up for it. 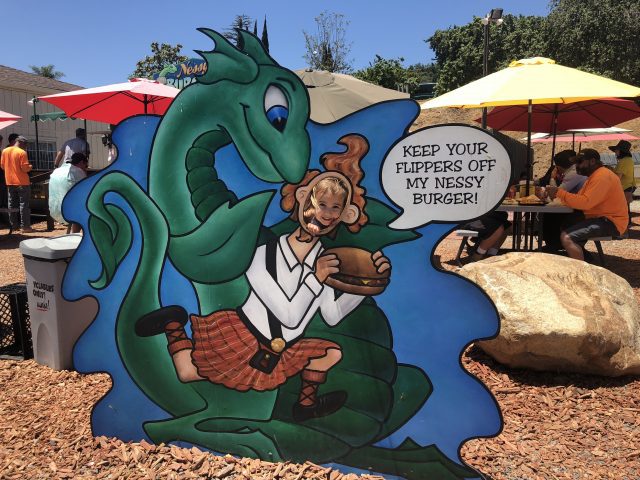 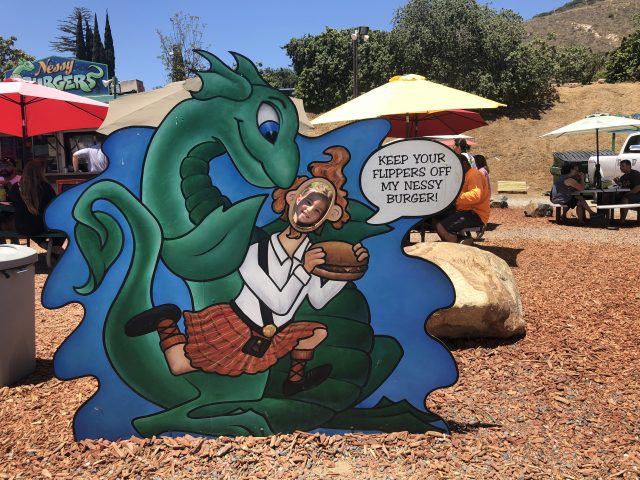 We got a Breakfast burger (with two fried eggs on top), a Nessy Burger, a Nessy Dog (hot dog my daughter devoured), and two grilled cheeses (made with hamburger buns, and so, so good…based on the bite I had of my son’s sandwich).

Do you Pick Your Own Berries?

Do you know of other fun spots to go berry picking in southern California? Share them below!