So here’s the thing: I swear we’re not crazy for taking three kids under the age of five on a cruise. There was a somewhat planned out method to our madness, and it started one day when I looked at my San Diego bucket list and remembered I wanted to go on a cruise while we’re stationed here. I thought about how fun a Disney Cruise would be, so I looked it up. 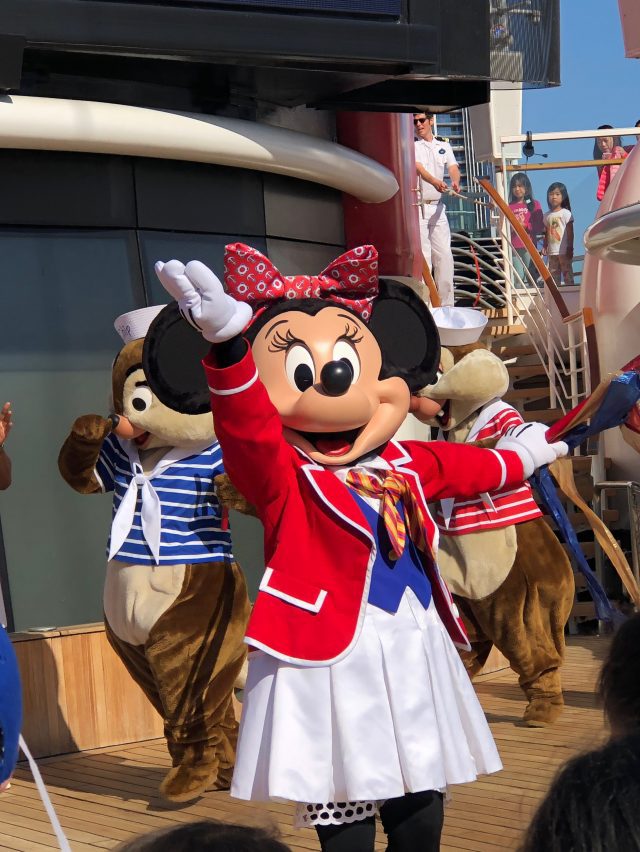 Lo and behold, there were a few that fit the bill (not literally, though; I’ll talk about how much they cost in a bit). There were several traveling down to Mexico, and then one caught my eye that made me book a room on the spot.

Literally. I called Disney to talk to them about it, and about 15 minutes later I had a placeholder for not just one, but two rooms…without talking to my husband first or my mom first. (But I promise I’m not crazy).

How I Booked the Cruise (Without Actually Booking it First)

The voyage I found was a “repositioning” cruise from San Diego to Vancouver, BC. The Disney Wonder—that’s the ship we went on—was wrapping up it’s southern trips and heading up north to start its Alaskan trips, so it had to get up there somehow.

This was a one-way trip up the Pacific Coast, and it was absolutely perfect for us. 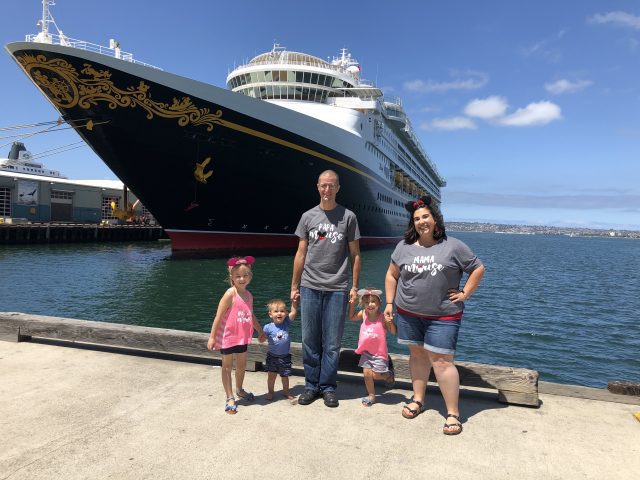 We wanted to see as much of California as we could before we move again, and I’ve always wanted to visit Washington and Oregon, so like I said…it was perfect. So perfect that I called my husband after I “booked it,” filled him in on the magic we were getting ourselves into, and held my breath as I waited for his response.

(I’m not gonna lie; I didn’t think that would be his response.)

And thus began our excitement for our Disney Cruise.

We actually had 48 hours to decide if it was really something you want to do. When you call Disney you can have a placeholder on a room(s) before actually booking it. No money down or anything like that—they didn’t even take my credit card number. They simply gave me prices and I gave them my name and email to hold everything.

Get this, we booked it through Disney, but then actually transferred our reservation over to Costco Travel, so we ended up getting Costco’s travel incentive (a gift card to Costco). 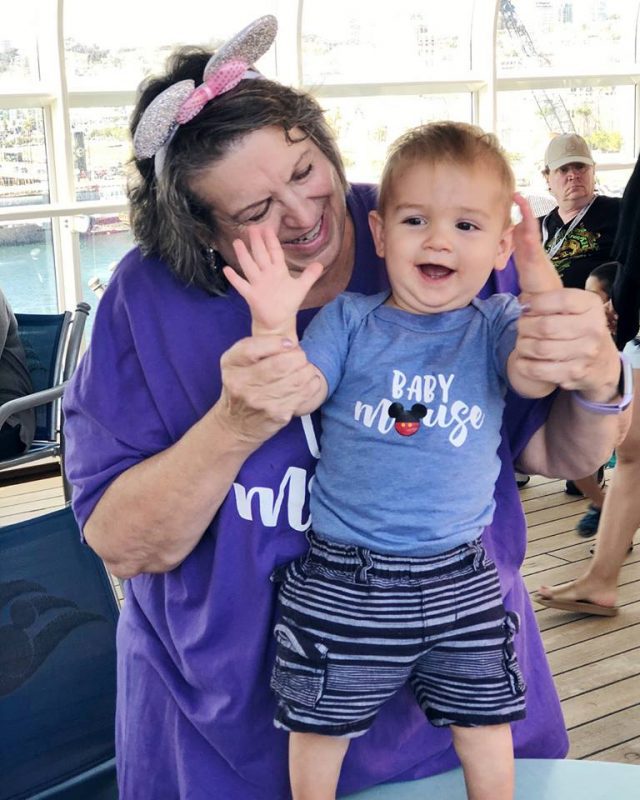 I mentioned my mom earlier, and she’s an integral part in this, because we have three kids under five years old, and cruise rooms are teeny tiny. Of course, we love having her with us, but it’s also always especially nice having extra pairs of hands and eyes for the little ones.

We booked two verandah rooms on our Disney Cruise, which is a fancy word for the fact that our rooms had balconies. We also made sure that they were connecting rooms so we could meander between both. Not only did they connect on the inside, but we could also take the partition down on the outside to make the balcony into one long deck instead of two. 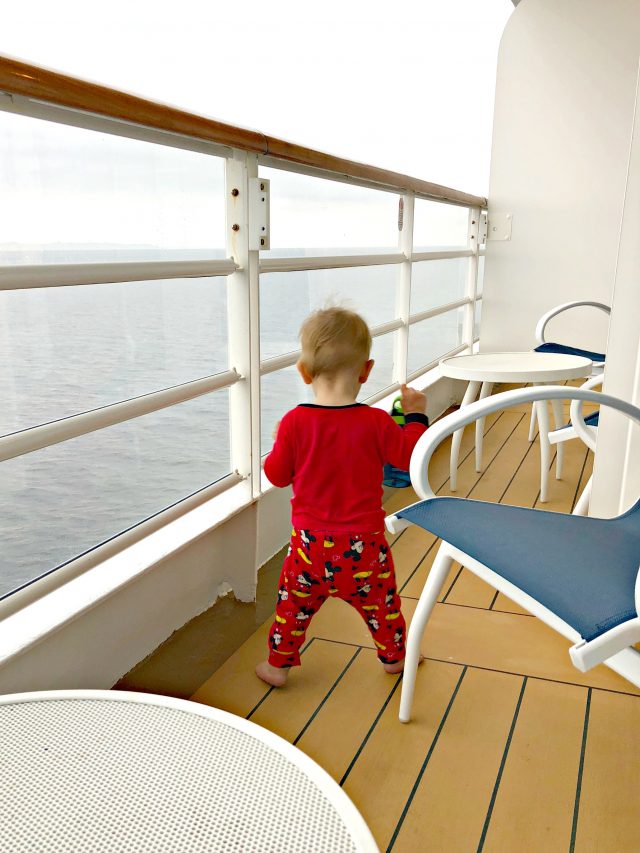 Another bonus to having a second room? The girls slept in my mom’s room, and then we had Logan in our room. It worked out perfectly.

Too Much Fun for the Kids

Speaking of the kids, they had a blast. I’m going to dive into what they did in a future post, but until then, here’s a quick look at the kids’ scene on board a Disney Cruise. 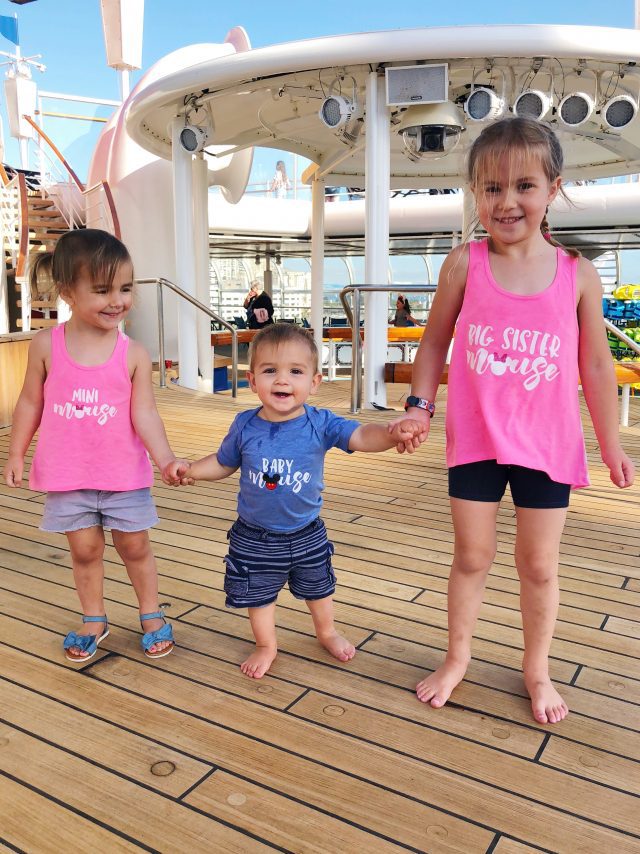 We called it “kids’ club,” but it’s officially called the Oceaneer Club and the Oceaneer Lab, and it’s for potty-trained kids ages 3 to 12 years old. They do have really cool looking places for the older crowd, too (Edge for tweens, and Vibe for teens). Essentially, they can stay and play in there from 9 am until midnight, and they’ll even feed them lunch and dinner. This is all included in the cost of your cruise.

Beyond just playing in there, they have classes, activities, and even story time for them, and Disney characters make appearances often throughout the day.

Getting them in and out of their kids’ club is really secure, so it was like a breath of fresh air to have them play in there and not have to worry about them. 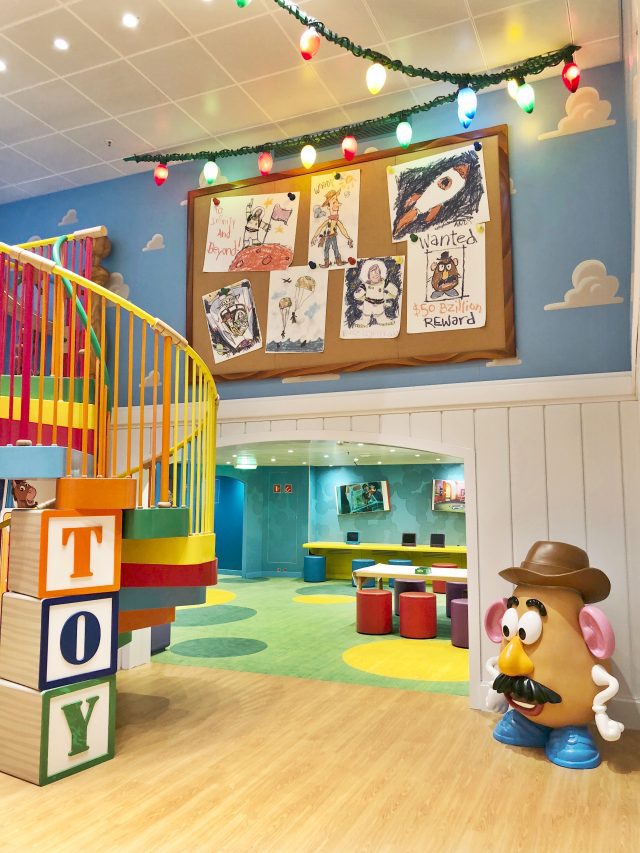 As for Logan, since he was only a year old and definitely not potty trained, he stayed with us the majority of the time. Since there were three adults, this was never a problem. We still gave him naps in the room during the day (thanks for watching him then, mom!), and he went with us to different activities.

We used their “It’s a Small World Nursery” two hours every night after dinner for him to sleep there while we did the nighttime activities. They were delightful and so thorough with watching over little ones.

How Much it Costs:

As for the cost, let me first share what’s included so that the sticker shock isn’t as jaw dropping. 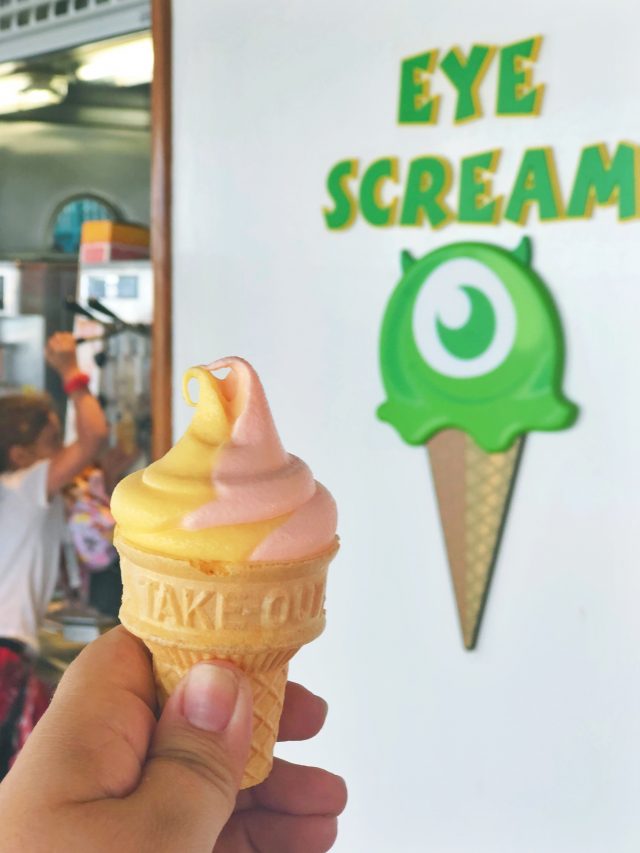 First: all the food you can eat. Seriously. With the exception of alcohol (which you can BYOB, by the way), and a fancy restaurant on board, everything you want to eat is free. Room service is free. Ice cream or pizza at all hours? Free and free. Three appetizers and dessert for dinner, or two main courses and all the dessert you want? Free, free, free, free.

You’re also paying for transportation and a place to sleep. Most cruises are round trip, so if you live near a port you don’t even have to think about renting a car or transportation. In this case, our Disney Cruise took us one way up to Canada, and then we rented a car and drove down the coast back home.

As for our room and board, we were there for five nights, so that was five nights of a “hotel” included in our price. 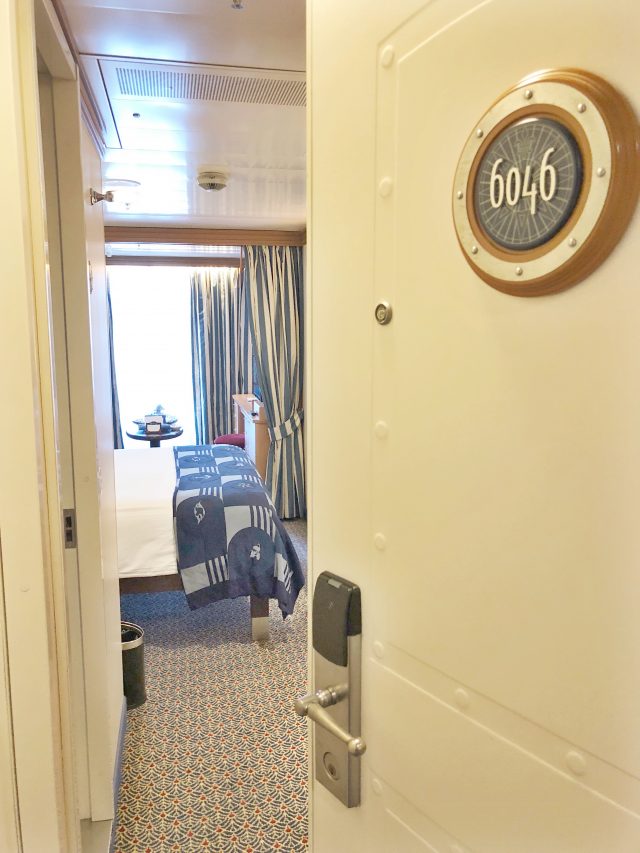 And by the way, the housekeepers clean up your room twice a day, which was one of my favorite parts of cruising. They clean it in the morning, and then again for the turndown service before bed. Talk about a dream come true!

If you go on a Disney Cruise your cost also covers entertainment like outstanding live, Broadway-style type shows, first-run Disney movies, classic and favorite Disney movies playing by the pool and on your stateroom TV all the time, and of course, all the Mickey, Minnie, and other favorite character signings. They also have all sorts of fun onboard to keep you busy and entertained: Towel folding classes, pub quizzes, dance parties, BINGO (but you do have to pay for that), fun tours and trivia games, and so much more.

So, for two rooms and six people (including tax, vacation protection plan, and tips for everyone on board), it came out to $10,000, which came out to $600ish per person/per day. Keep in mind this was for TWO balcony rooms. We had four in one room which came out to around $6,000, and the other two people were technically in the second room for around $4,000.

Can you go on cheaper cruises? YES. You can certainly find deals out there, and you can even get cheaper rooms on the Disney Cruise, but I also knew my kids would really enjoy this one. And they totally did!

You Can See The World

Another awesome benefit to cruising is that you can see the world. During our Mediterranean cruise I visited different parts of Italy, Greece, and Turkey, and I probably never would’ve visited there if it wasn’t for cruising.

This time we went to San Francisco and into Canada, and for our next cruise (spoiler alert: we booked another Disney Cruise for next year), we’re going to Mexico! 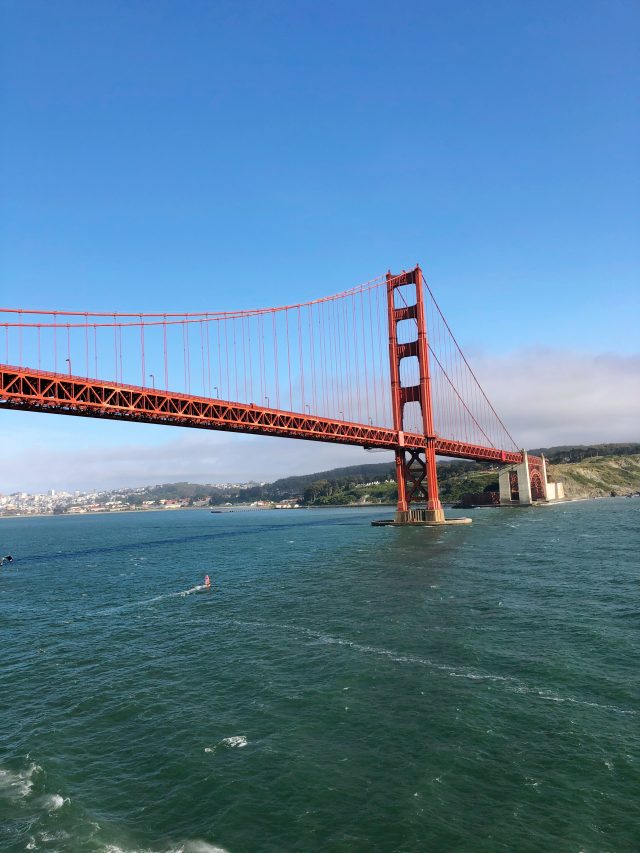 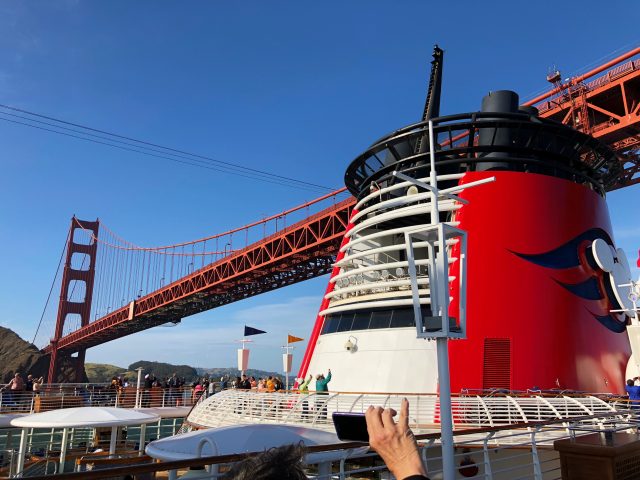 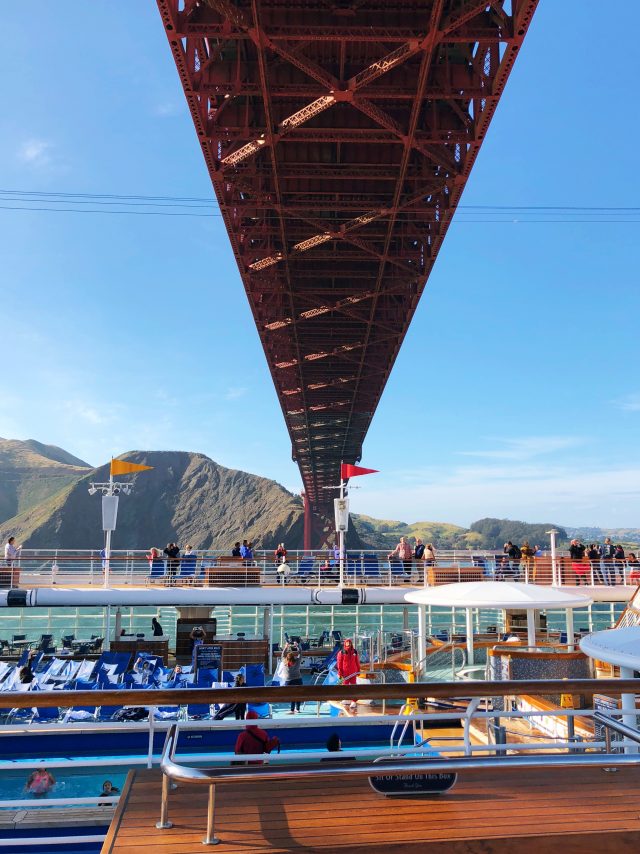 Cruising is just such a fun way to travel, and I love that the majority of the planning is done for you. They have excursions planned for you that you can take (for an extra charge), or you can simply get off the ship and do your own thing.

More to Come From Our Disney Cruise

That’s a pretty brief overview for our Disney Cruise; I have several more posts planned and coming soon, but hopefully that’s enough to whet your appetite for the moment. If you have questions about specific things, let me know, and I’ll either write a post about it, or make a whole new post about it.

We truly had the best time, and I’m going through cruise withdrawal now that I’m back on land and don’t have the amazing Disney magic popping up around every corner. 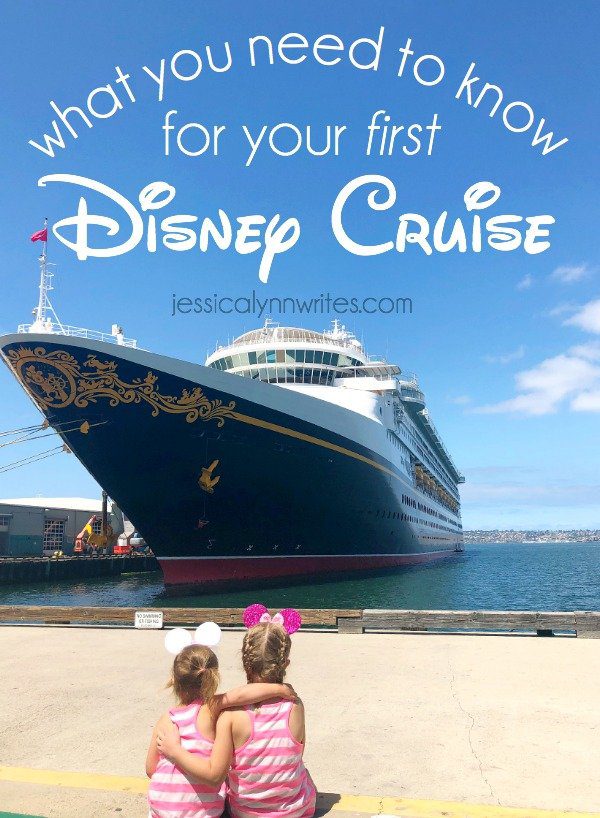 Have you been on a Disney Cruise before? What was your favorite part? Do you have questions about cruising with Disney? Leave them below and I’ll answer them in a future post!