There’s something extra magical about doing something unique that most people won’t ever get to experience. When we went on our Disney Cruise last year, we did just that…and it still blows my mind. We actually sailed under the Golden Gate Bridge not once, but twice. And it was spectacular both times.

We sailed on the Disney Wonder on something they call a repositioning cruise. It left out of San Diego, CA, and repositioned (from the southern ports), to get ready for their Alaskan cruises. Along our route we stopped in San Francisco, some place in Canada, and then we disembarked in Vancouver, British Columbia.

Going Under the Golden Gate Bridge in the Morning

My mom and I are early risers, and we had connecting staterooms, so when she woke up, she quietly tip-toed into my room to get me up. I was beyond excited to be up before 6 am.

For real. Despite my O-dark-thirty look, I was really excited, because we sailed right under one of the most famous bridges in the world, all while thousands of people slept. (Also, thank goodness for hot coffee delivered the night before.)

San Francisco is known for the thick fog that rolls in, but to be there, and feel that mist and sea breeze while the sun (and most people) slept? It was amazing and so flipping cool. The whole experience felt so mystical and forbidden somehow.

We watched as the bridge was hazy and far away, to finally seeing that deep “international orange” hue (that really looks more like red) start to pop as we got closer. It blew my mind.

I stopped taking pictures and started recording this awesome site as we slowly passed underneath. Take a look: 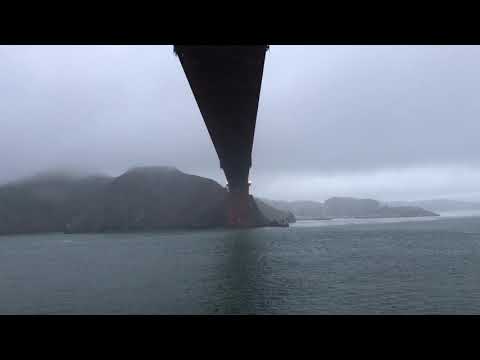 And then we saw another landmark in the hazy distance: Alcatraz.

A Site to See in the Morning

Going Under the Golden Gate Bridge in the Afternoon

After our port stop in San Francisco we all hopped back aboard the Disney Wonder and got ready to sail away again.

The girls went back to the kid’s club, and the grown ups (and our youngest) walked up to the top deck to wave adios to San Fran.

One of the coolest parts of cruising is pulling away from any of your ports. Getting to see the city landscape from afar is quite possibly the coolest view you’ll ever take in of that town.

And then we saw her again.

If cruising under the Golden Gate Bridge in the morning wasn’t cool enough, we actually did it again on our way out of San Francisco in the afternoon! But this time you could really see it shine.

A Little Disney Flair in the Afternoon

Even though not all of us were ecstatic to be up on the top deck (it was nap time for the baby), I was having the time of my life. There’s this energy that flows through you when you’re on a Disney Cruise, and during this particular moment, there was so much excitement rushing through me.

Instead of just sailing under the Golden Gate Bridge, they added a little Disney charm, because they “honked their horn,” and when a Disney Cruise ship toots their horn it’s to the classic “When you Wish Upon a Star” chime.

Not gonna lie: I totally got chills. It was—for lack of a better word—magical. See for yourself: 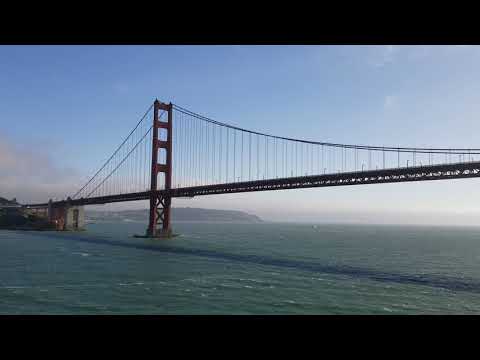 I don’t know what it’s like going under the Golden Gate Bridge on any other type of vessel, but to cruise under with Disney? Totally worth it if you ever get the chance!

Wind-blown hair and all; this is my happy face.

Want in on this cruise for yourself? There’s usually only one sailing a year, and it’s towards the end of April since the Disney Wonder is repositioning from the south (in San Diego) to the north for their Alaskan cruises.

Have you ever sailed under the Golden Gate Bridge? Is this on your bucket list now?